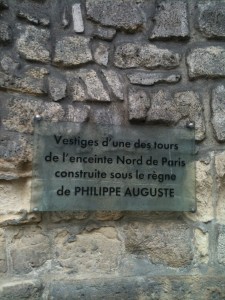 Now if you happen to walk down Rue du Louvre, with your back to the Seine, you should stay on the left side until you come to the remains of a stone wall that is actually part of the fortress built by Philippe Auguste at the end of the 12th century to protect Paris while he was off at the Crusades. It was later to become the Louvre.

Cross over to the other side and you’ll come to a large round building. Few people realise that it’s open to the public and that you can just wander in. It used to be the Bourse du Commerce which, despite its name, isn’t the stockmarket which is about ten minutes away, but the commodities market. It was originally built by Louis-Philippe in 1763 to store and sell wheat. Its location was chosen due to the proximity of the Seine and it was financed by constructing rental buildings around it. 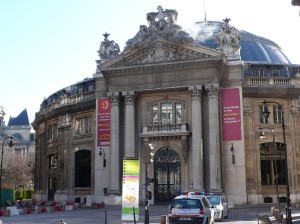 Today it’s the Chamber of Commerce and Industry. It’s built on a circular plan, 122 metres in circumference. There were two concentric galleries above 25 covered arcades. The galleries housed the police, the weights and measures office and the statistics bureau. Enormous wheat lofts on the first floor were accessed via two beautiful spiral staircases, one of which had a double revolution so that the administrative staff and merchants didn’t have to rub shoulders with the porters! The courtyard was orginally open but later covered with a wooden dome to protect the wheat. 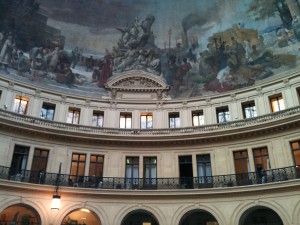 After a second fire in 1854, the building was closed for 30 years before being renovated and converted into a commodities market in 1885. Wheat, rye, oats, flour, oil, sugar, spirits, rubber, cocoa, coffee, potatoes, and rape were sold by auction until 1998 when it was disbanded due to computerisation of the futures market. If you stand right in the middle and speak, your voice will be amplified.  The inside is decorated with murals depicting the four cardinal points. You’re not supposed to take photos, I discovered after I got to the third cardinal point, so you’ll just have to go and see for yourself !

Just next to the Bourse du Commerce, you’ll see a tall column which has an interesting history. It’s the last vestige of a private hôtel built by Catherine de Médicis in 1572. The queen had the 31-metre high tower built for her astrologist, Cosimo Ruggieri. They often used to go up to the top of the tower together, where he whispered, not sweet nothings, but magic spells.

The top part of the column used to be glassed in but all that’s left today is a metal frame. After Ruggieri died in 1615, it fell into disuse and the building was demolished in 1748 to pay the debts of the last owner, Amédée de Savoie. Only the tower was saved and bought by the City of Paris in 1750. A fountain was added, which has now run dry, and a sundial. Legend has it that on stormy nights, a long black silhouette appears in the iron cage every time there’s a flash of lightening! I’ll let you go and check that out as well too.