Baja and Pecs – a few surprises

Posted on October 1, 2015 by Rosemary Kneipp

After our wonderful visit to Szeged with its beautiful Art Nouveau buildings, we arrive in Baja, our Danube destination for the next three nights.  We follow the Tom-Tom and arrive at Hotel Kaiser Panzio (pension) where we’ve booked an apartment as we would like a bit more space and the possiblity of doing a little microwave cooking for a couple of days. We are barely greeted by a sulky-looking woman at reception. She finds our booking and takes us to our ground-floor apartment. It looks like the photos on booking.com (including the strange bed) so we tell her it’s fine. 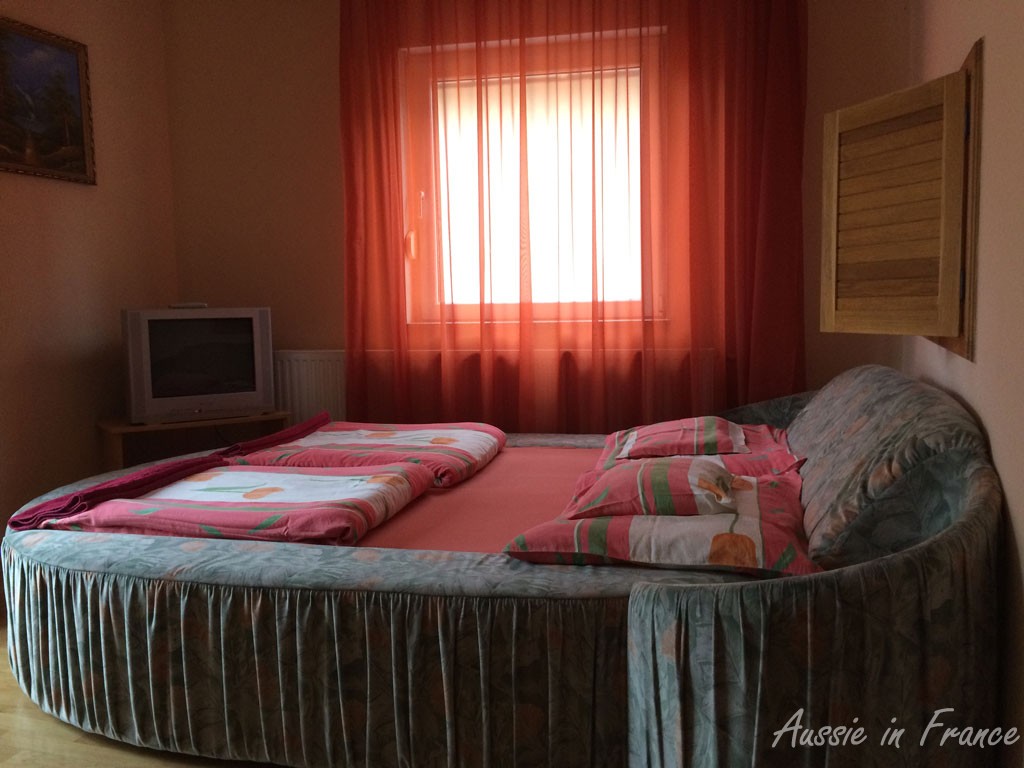 Our apartment with its strange bed

Before unpacking, I check the kitchen cupboards to see what we need to bring in from the car. They are completely empty. No crockery, no cutlery, no saucepans. Yet there is a stove, a sink, a refrigerator and an electric jug (no micro-wave). How very odd. We go back to reception and I explain in clear basic English that we won’t be able to cook. The woman brings us two plates, two cups and one set of cutlery.  She disappears again and brings back a greasy frying pan, two large flat saucepans and a soup ladle.

Still mystified, we unpack quickly and go shopping because it’s nearly 5 pm. We arrive at a bus station and are totally disconcerted. This is NOT what we were expecting. We manage to buy some white bread and yoghurt but can’t find anything resembling a supermarket. Then I spy an information panel. “Ah”, says Jean Michel, after examining it, “we went the wrong way.” 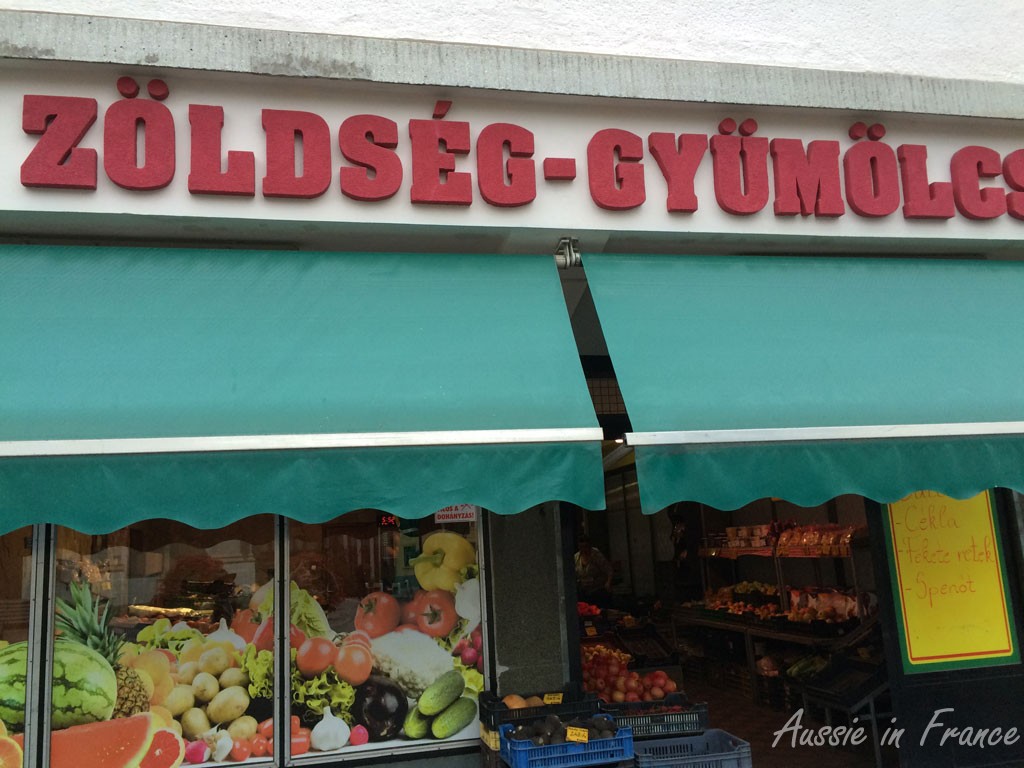 The fruit and vegetable store

We head in the other direction and find the centre of the town which is much more reassuring. We catch a fruit and vegetable store just as they’re closing and a bakery that has wholemeal bread. I ask where we’ll find cheese. The lady says CBA as though it’s given and points the way. It turns out to be a supermarket where we find some Danish and Dutch cheese and a few other things to sustain us until tomorrow. 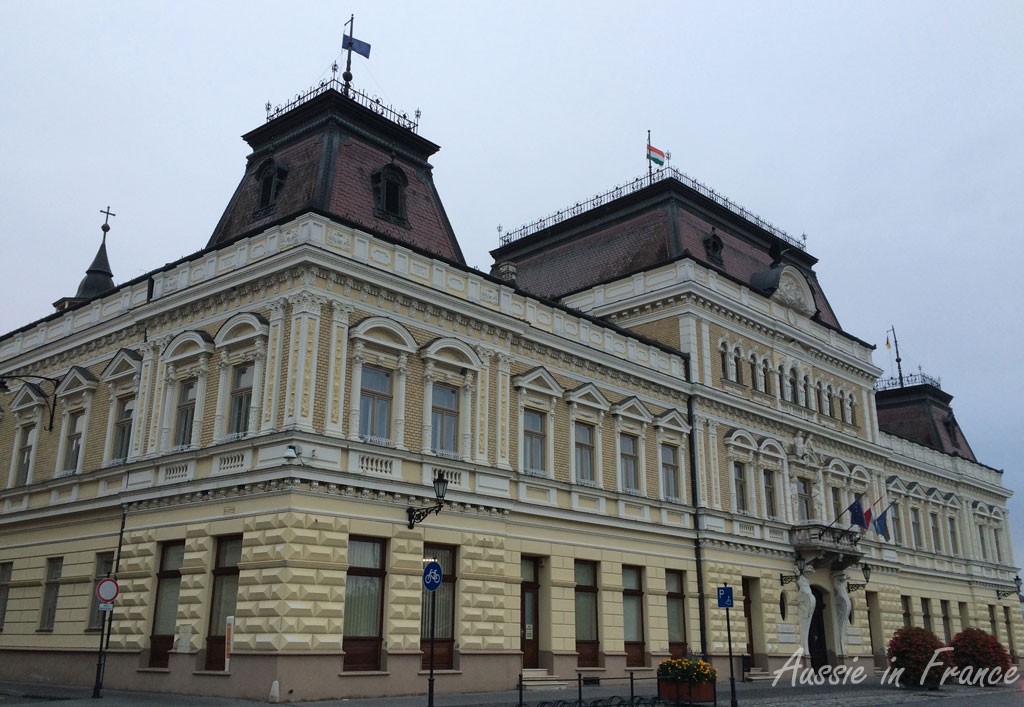 The main square in Baja at dusk

Back in our apartment, we find a few other annoying things such as the lack of space (there is furniture everywhere and you have to pull out the table to sit down). There are only three chairs although the apartment can sleep four. You have to have gorilla arms to reach the toilet paper and be over 2 metres not to drown in the shower. The dark red frayed towels are non-absorbent and there is nowhere close to the shower to hang them.

Because we carry out own wine glasses, corkscrew, plates, kitchen knives, bread knife, cutting board, salt & pepper, oil & vinegar, tea towels and washing up liquid we are able to have our aperitif and dinner and wash up afterwards. On the positive side, the bed is comfortable (not the pillow, but I always bring my own) and the apartment is clean and quiet. 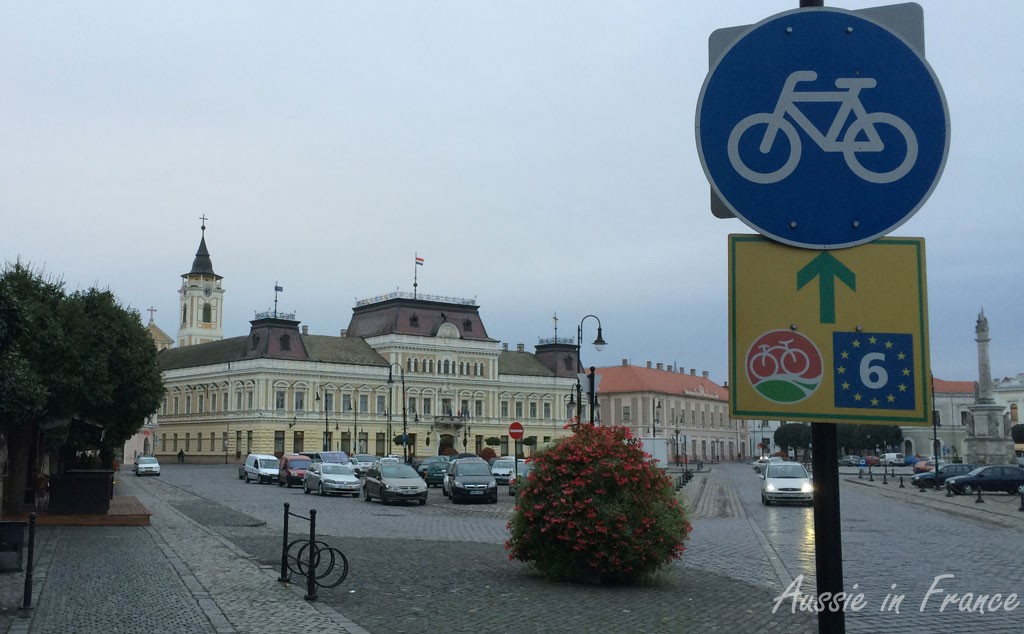 The Eurovelo 6 bike route along the main square of Baja

Next morning, we go back into the centre of the town and are able to appreciate it more. It’s only 11°C  but it’s not rainy and should be 15°C and sunny in the afternoon. It’s 10 am and I am amazed to hear the chimes of the local church playing the Seekers’ Pierrot and Columbine song . I check it out later. 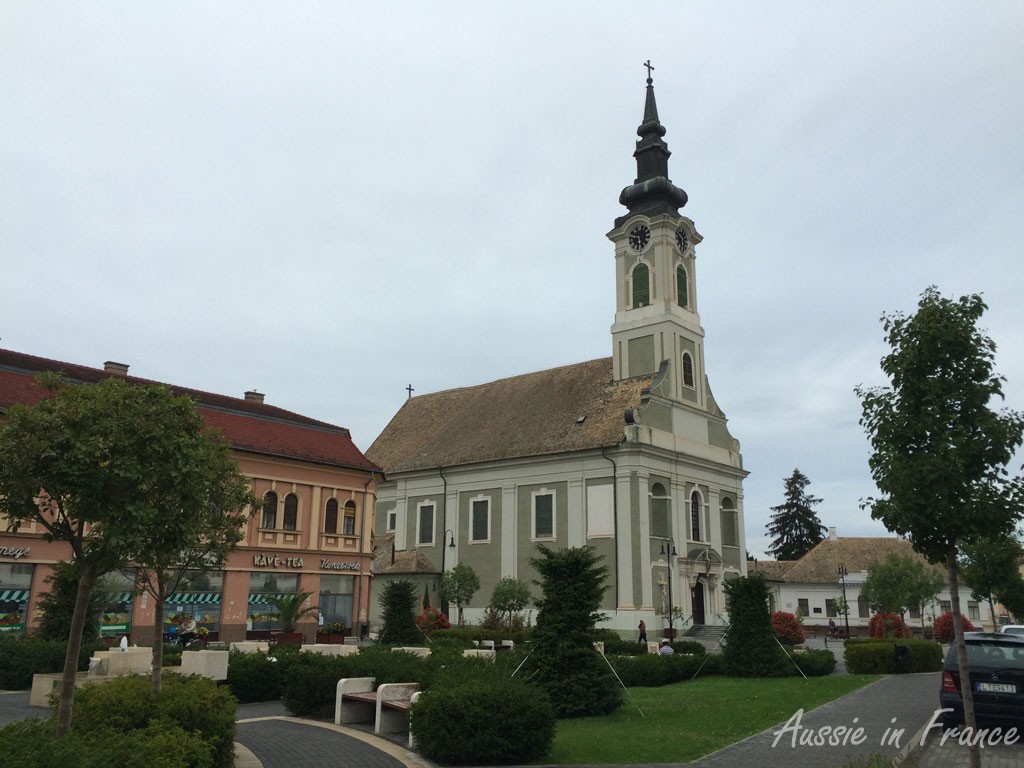 Baja church with the chimes

Tom Springfield wrote it for the Seekers in 1953 based the melody on the Russian folk song Stenka Razin (or Stenka Rasin). Stenka Razin was a Cossack rebel leader who led a major Cossack and peasant rebellion on Russia’s southeastern frontier in 1670-71. You can listen to the Seekers singing it here if you’re not familiar with the tune. 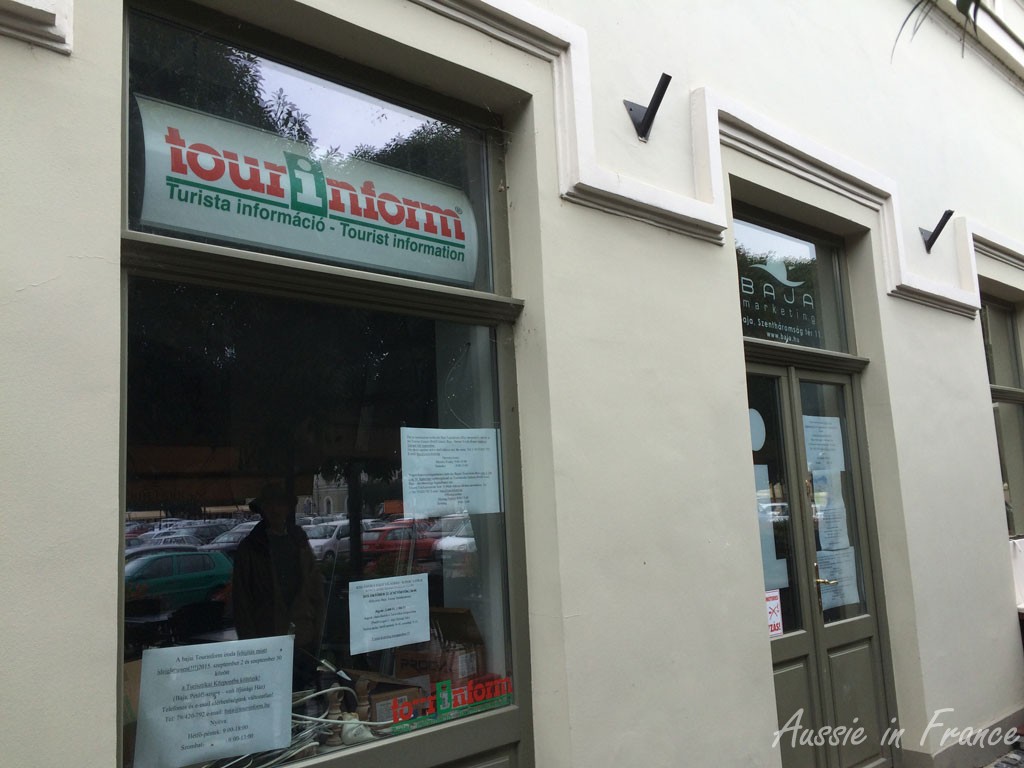 Our first destination is the tourist office as the Hotel Kaiser Panzio does not provide any maps or brochures. A sign indicates it’s the main square. We can’t find it. I ask at the Wellness Hotel and am sent to the other side of the square. After a long search we find a door that says “closed” and indicates that the Tour nform is on the other side of the bridge, 500 metres away. 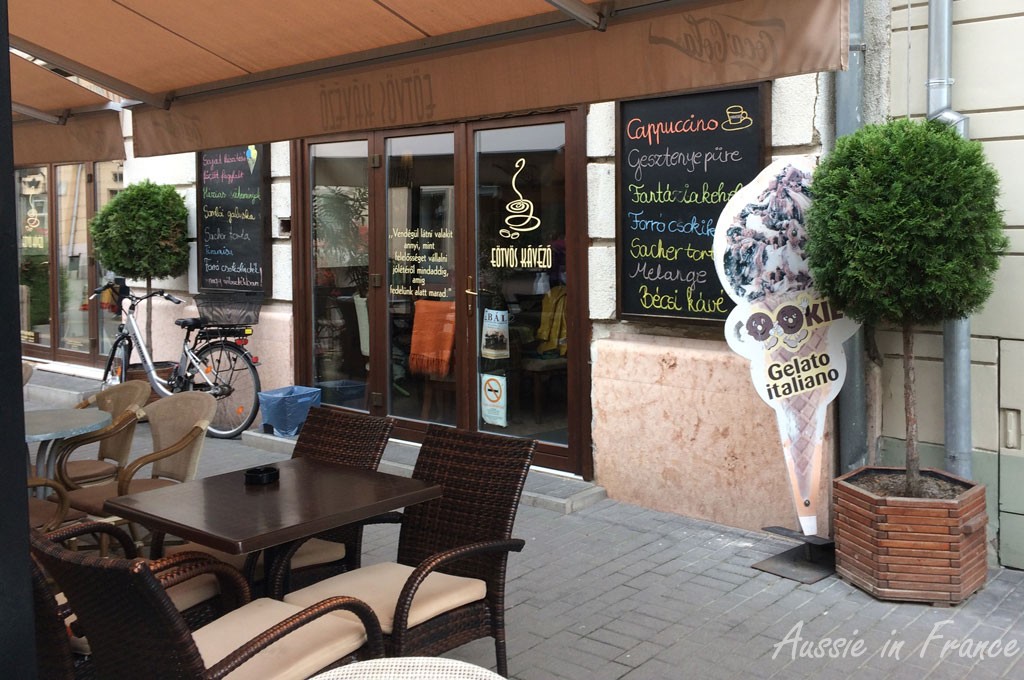 Our cappuccino café – we sat inside

This calls for a cappuccino. Jean Michel takes me back to the street on the other side of the square where he has a seen a likely-looking café with local ladies eating cakes. I have a mille feuilles that isn’t bad while he has a rocher. The cappuccino isn’t exactly Italian but it’s better that what you usually get in France and we pay a total of 4 euro. 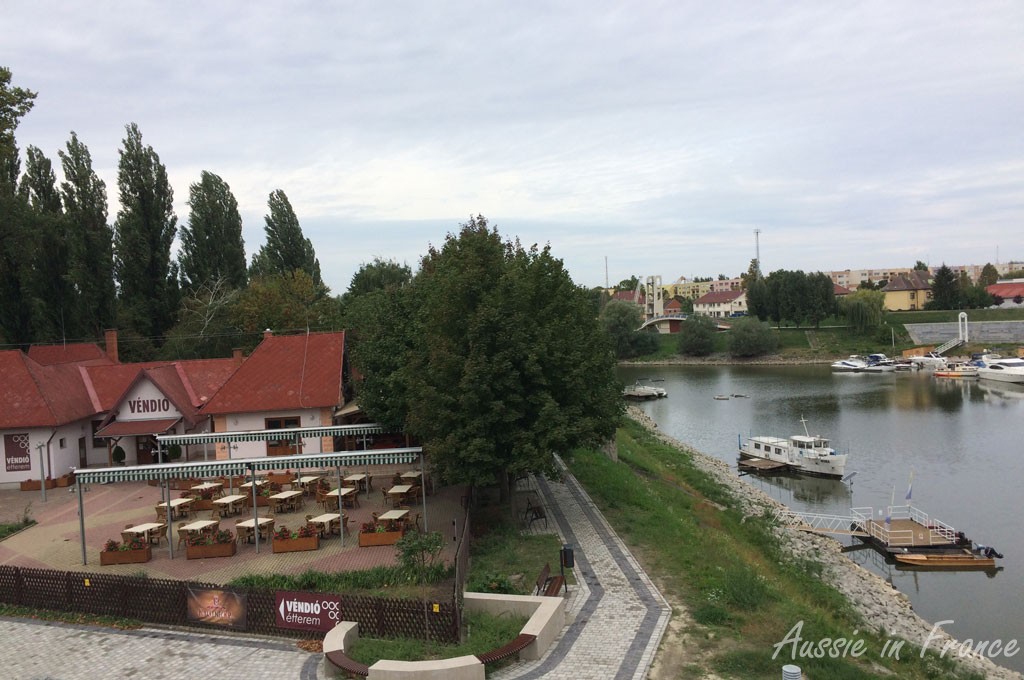 We set off over the bridge to the tourist office. The girl is very friendly and helpful and gives me a brochure and map that she explains in English although she has a little difficulty in explaining anything I say. I think she might be more used to foreign English! 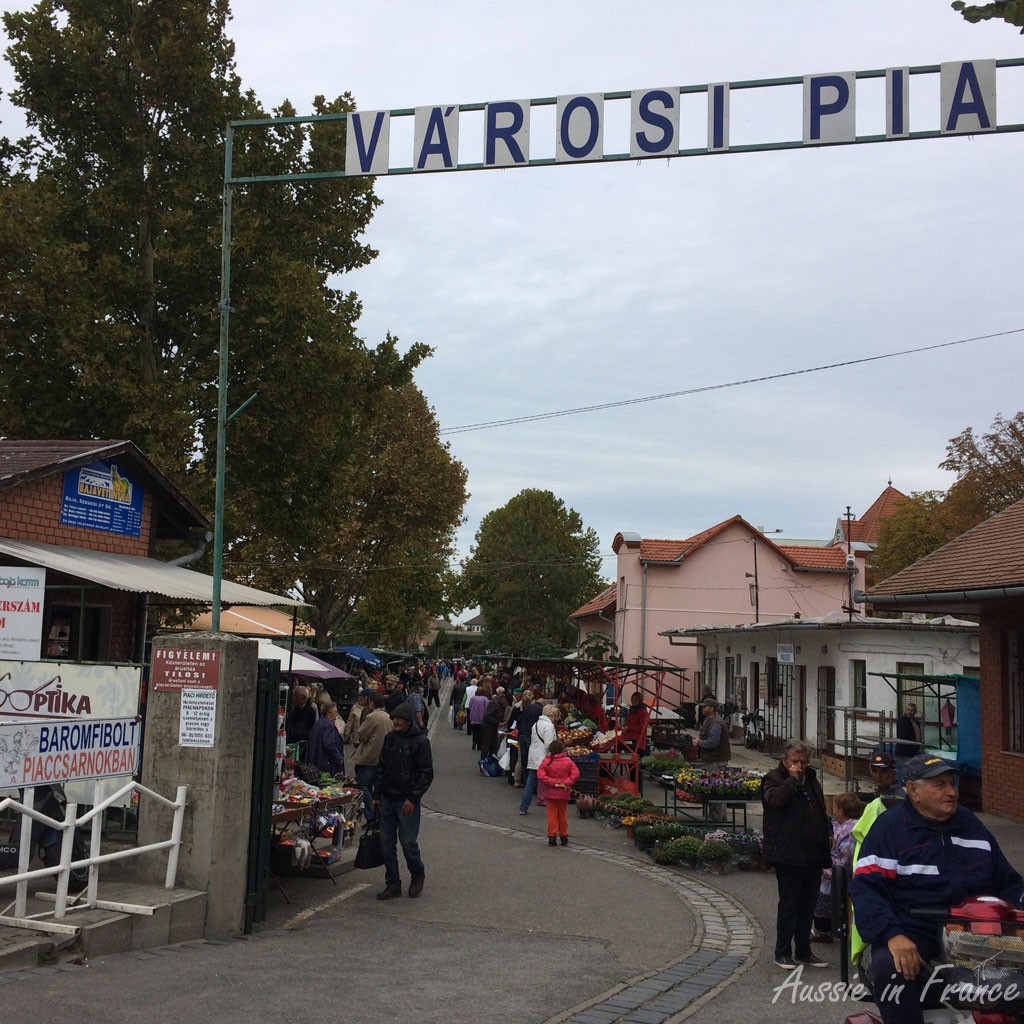 The market in Baja

As we are walking back to the main square to buy more fruit and vegetables I see a man with parsnips sticking out of his shopping bag which makes me suspect a fresh produce market. Sure enough, over to the left, we find a large market with a lot of local producers. We do the rounds and finally buy tomatoes, capsicum, coleslaw  eggs and grapes. 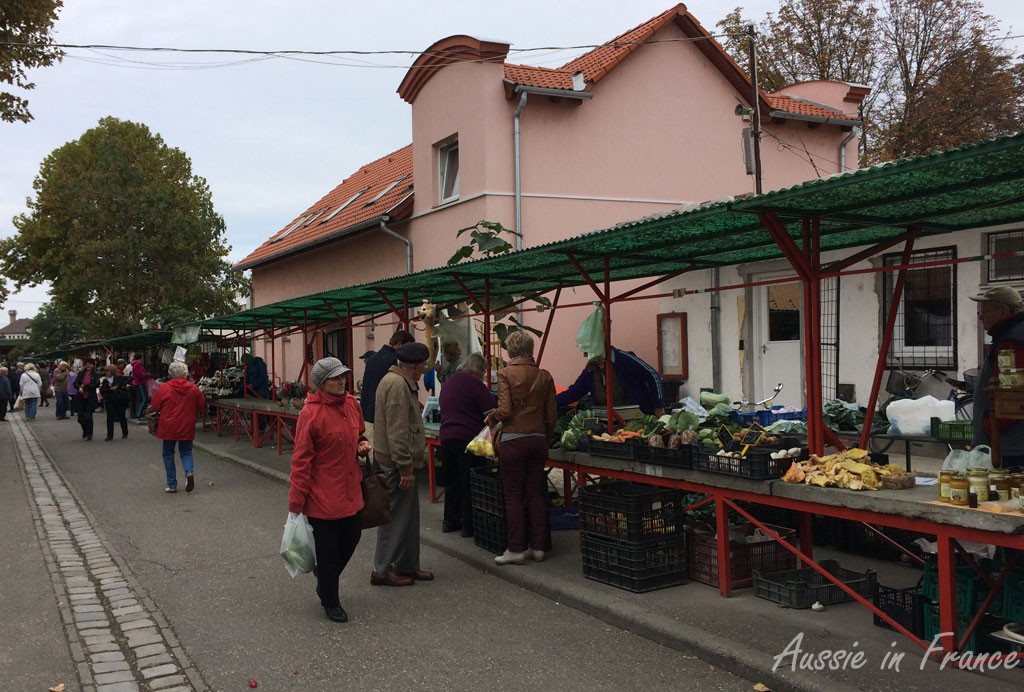 Fruit and vegetable stalls at the market

We also find a cheese stall. The vendor helpfully says “sheep” in English, which I don’t understand at first because I think she’s saying cheese. She tells me the other cheeses are cow.

Our communication is a little rudimentary but all the prices are displayed and I demonstrate how much I want. Everyone gives us a little bit extra produce after telling us the total amount.  We smile a lot and try and manage to get our tongues around thank you (koszonom) and goodbye (isten veled). Unlike all the other European languages, Hungarian, along with Finnish and Basque, is not an Indo-European language which means it’s out on its own and doesn’t ressemble anything else. 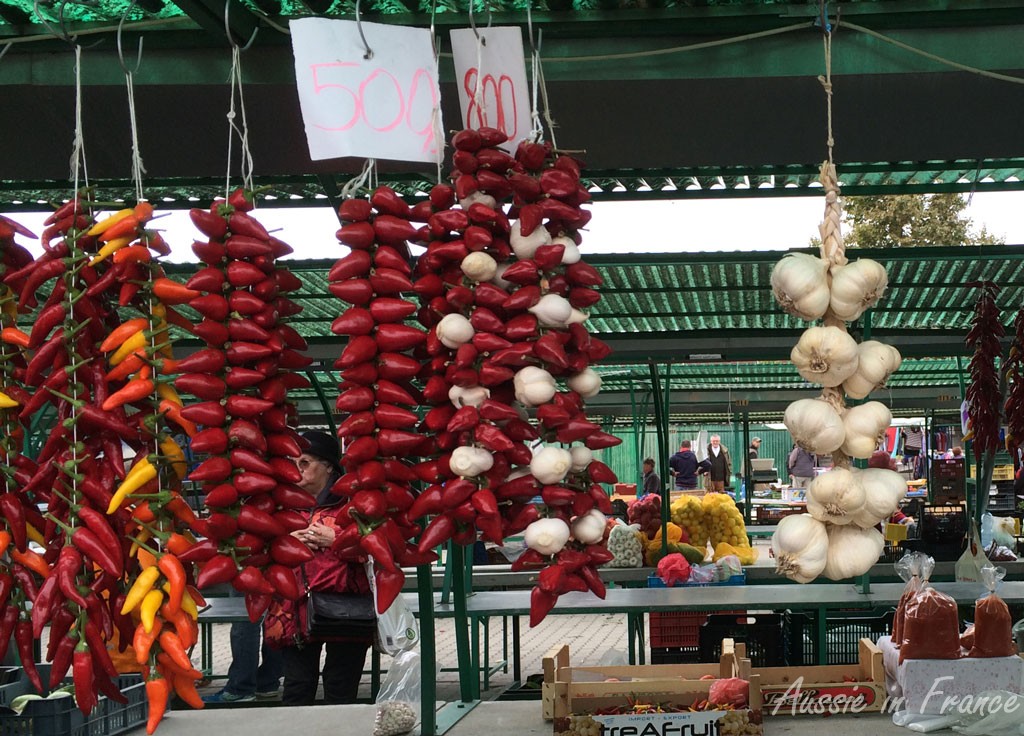 Paprika at the market

We also buy a white lace doily for the chest of drawers in our guest room.  I’m sure that 4000 florint (13 euro) is far too much but the lady and her husband look as though they need a bit of extra money so I don’t mind. She throws in a small doily as well. 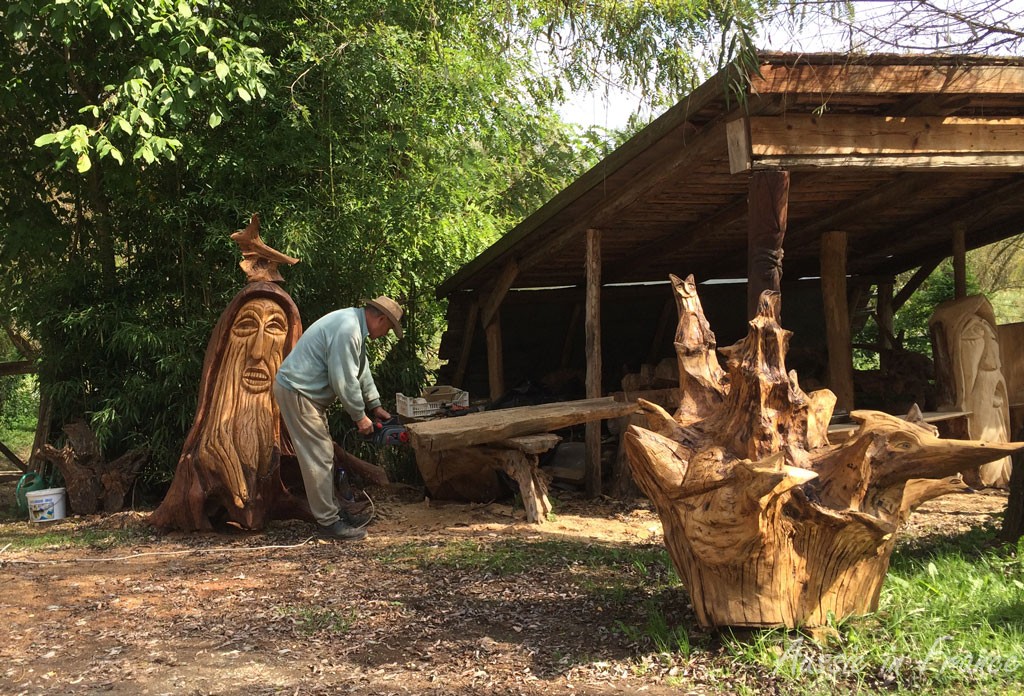 A sculpteur seen from the road on the way to Pecs

Delighted with our purchases we walk back to our hotel to put them away before driving to Pecs, about an hour away from Baja. But first, I need an external hard drive because my excessive number of photos (past and present) is clogging up my laptop. We go into a little out-of-the-way computer shop and are offered a hard case for  the equivalent of 10 euro into which we are to insert a 70 euro hard drive. I can’t  believe the prices and the fact that he doesn’t have one that’s already mounted. We decide to try somewhere else. 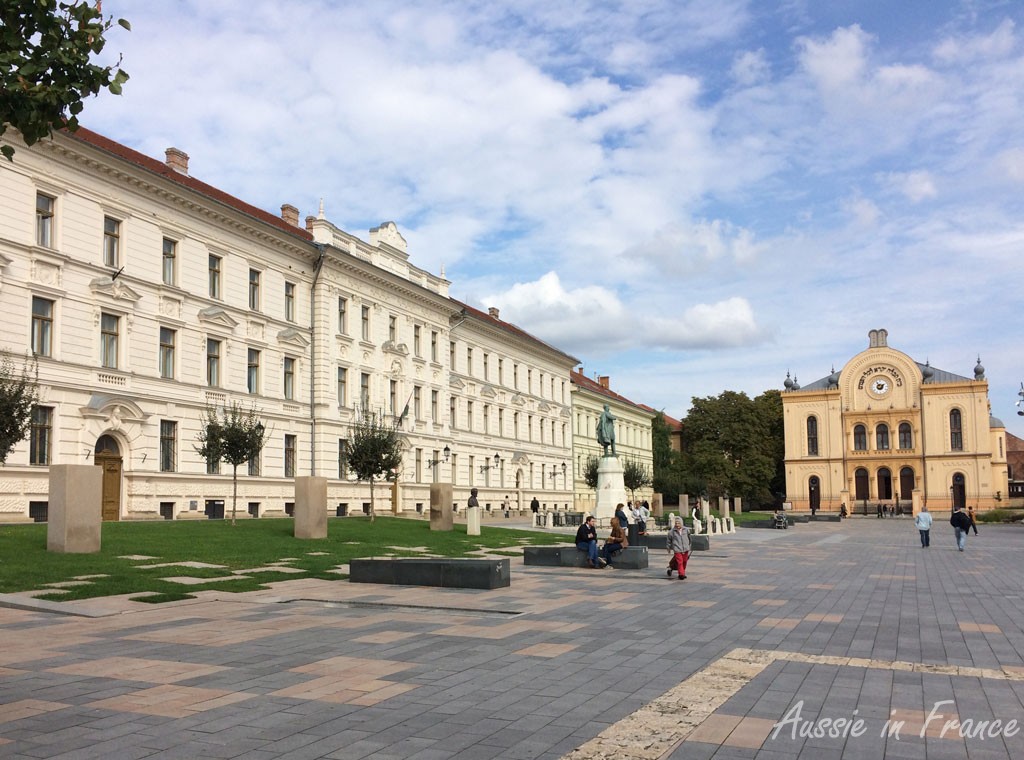 One of the mosques in Pecs

According to the Routard, Pecs is a “little jewel  of a city”. We are rather disappointed after Szeged although we there are lots of Austro-Hungarian buildings and the sun comes out which helps. 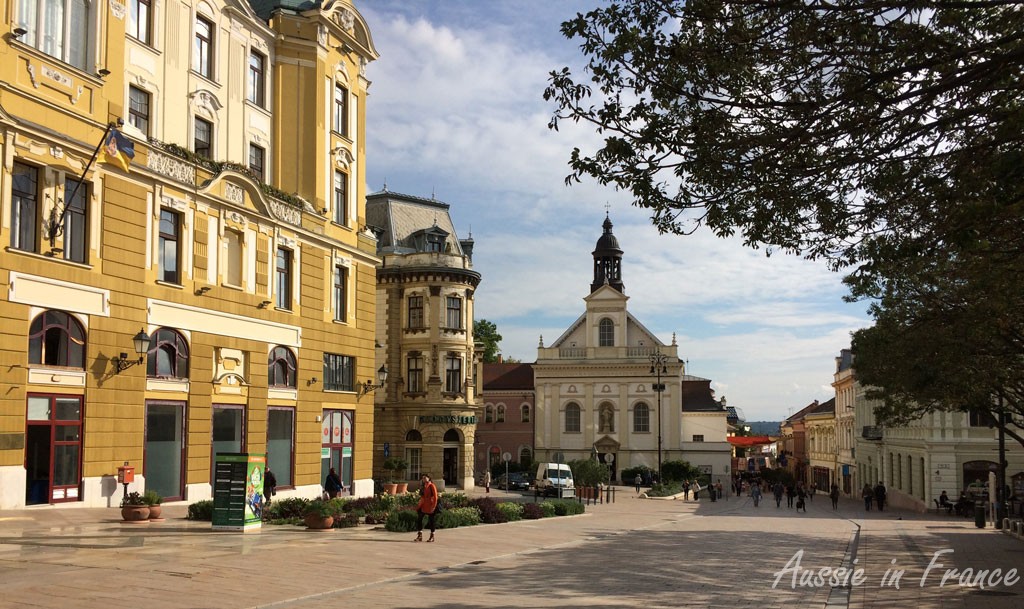 A church in Pecs

We start with lunch at Matyas Kiraly Vendeglo, which offers a set daily menu at 990 florints (3.30 euro). We have a very palatable egg soup and pork schnitzel with coleslaw and a sort of fried rice. 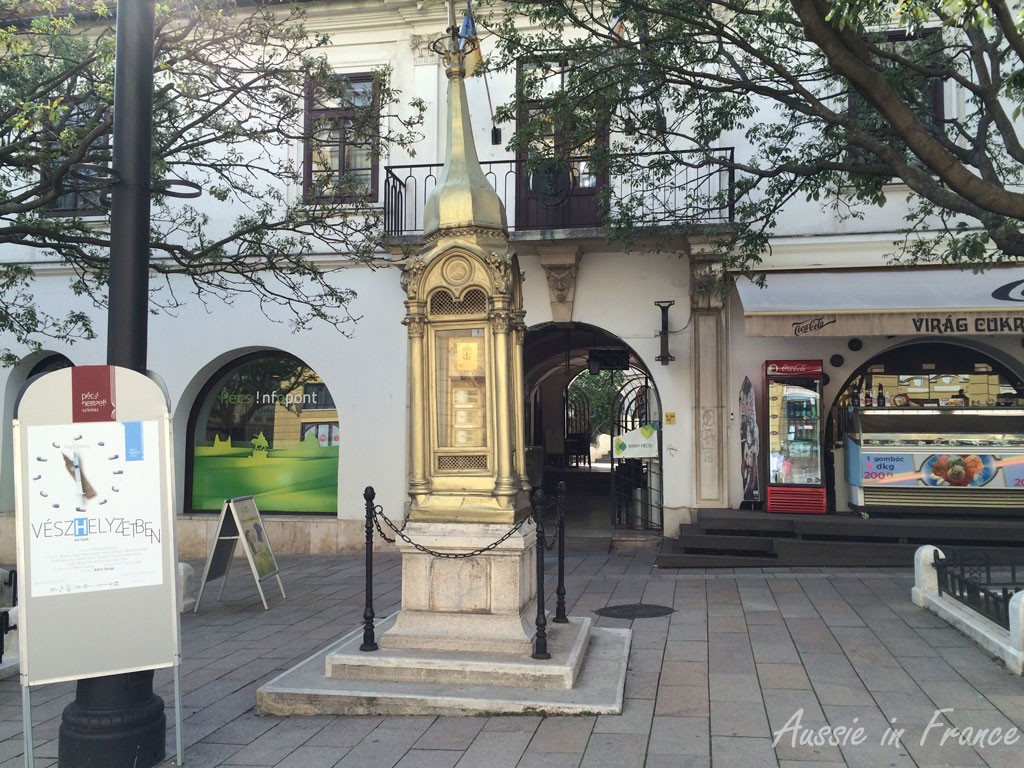 Tourinform in Pecs – hidden in an arcade as usual

We eventually find the Tourinform, which is just as difficult to locate as anywhere else! A young girl rattles off the list of things to do in English but doesn’t really understand what I say to her.

Pecs’ main claim to fame is the Cella Septichora, which contains the remains of a 4th century early Christian burial ground. Apart from Pompei and Herculaneum I’m afraid I find it difficult to relate to ruins, especially when you can’t get an idea of the building as a whole. 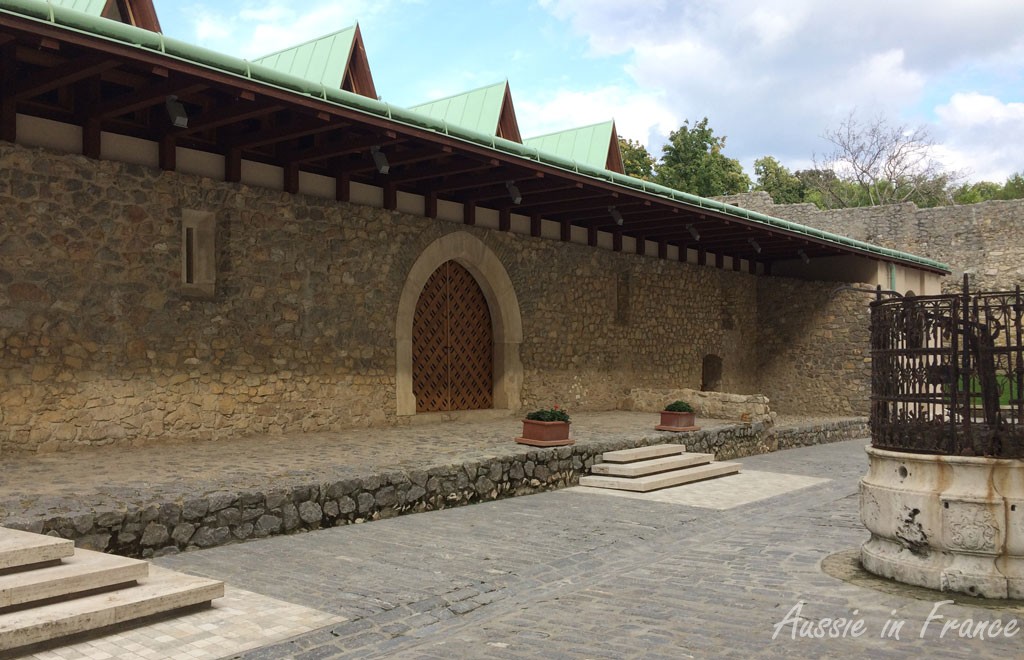 The mediaeval university in Pecs

There is also Hungary’s first university founded by Louis the Great in 1367. 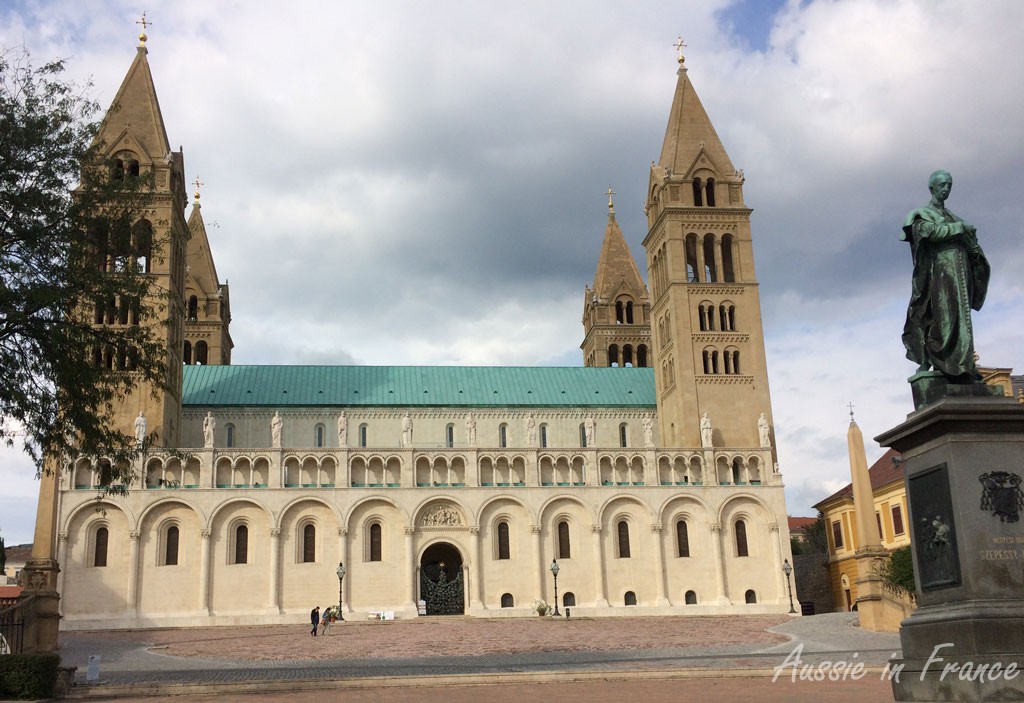 The cathedral in Pecs

The history of the cathedral, of impressive size, also dates back to the 4th century. Its present form is a Neo-Romanesque reconstruction that took place at the end of the 19th century. 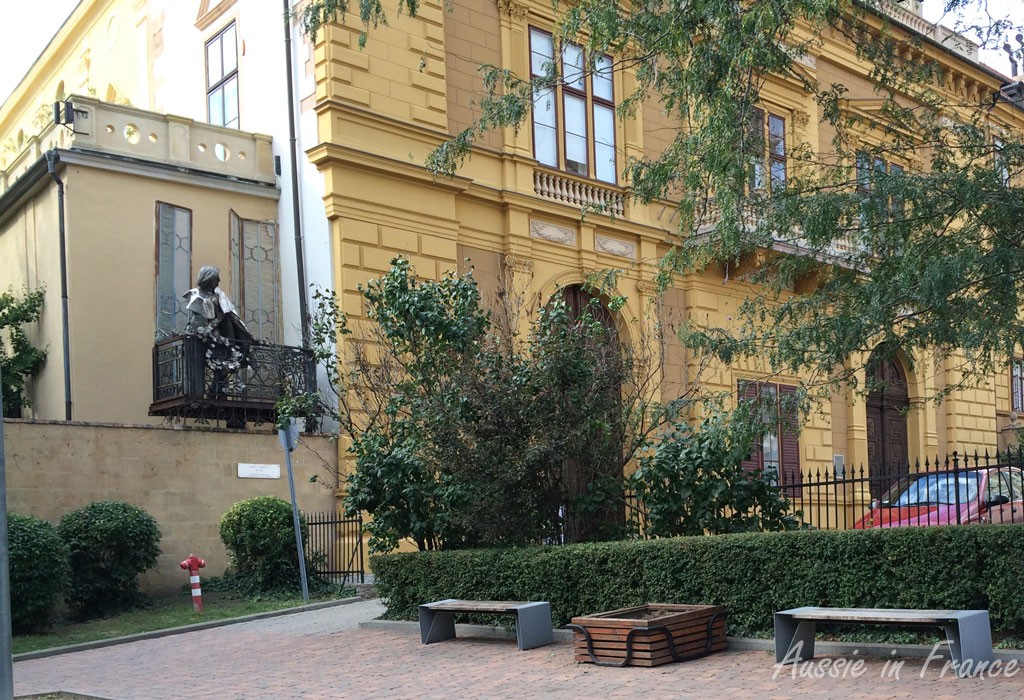 By the time our parking metre runs out, my feet are killing me so we decide to forego a visit to Zsolnay Museum’s porcelain collection which I later learn is definitely worth a visit. 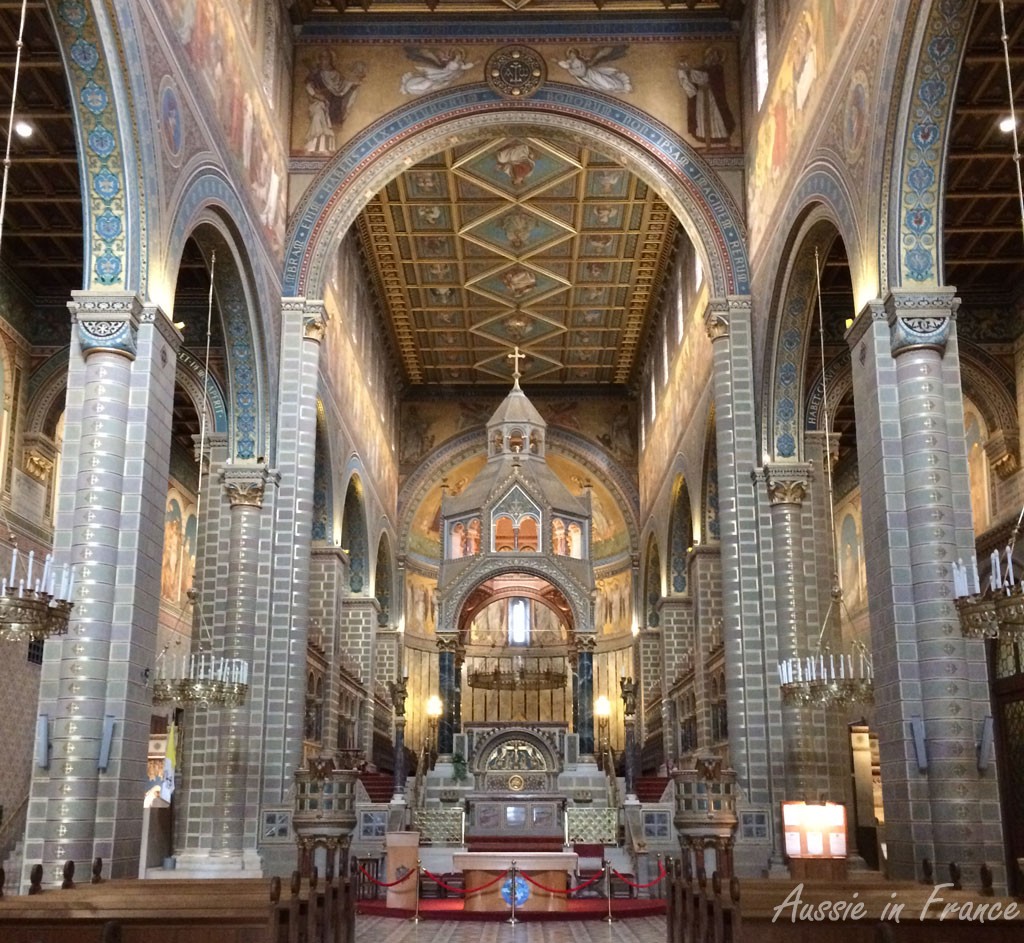 The inside of the cathedral in Pecs

Before taking the motorway (we didn’t take it on the way to Pecs), we stop to buy our obligatory vignette in a Shell service station. A Gestapo-like lady gets quite annoyed with our dithering, especially when we don’t know our car registration number . I dash out and take a photo. The 10-day vignette costs 10 euro and allows us to go on all of Hungary’s motorways. 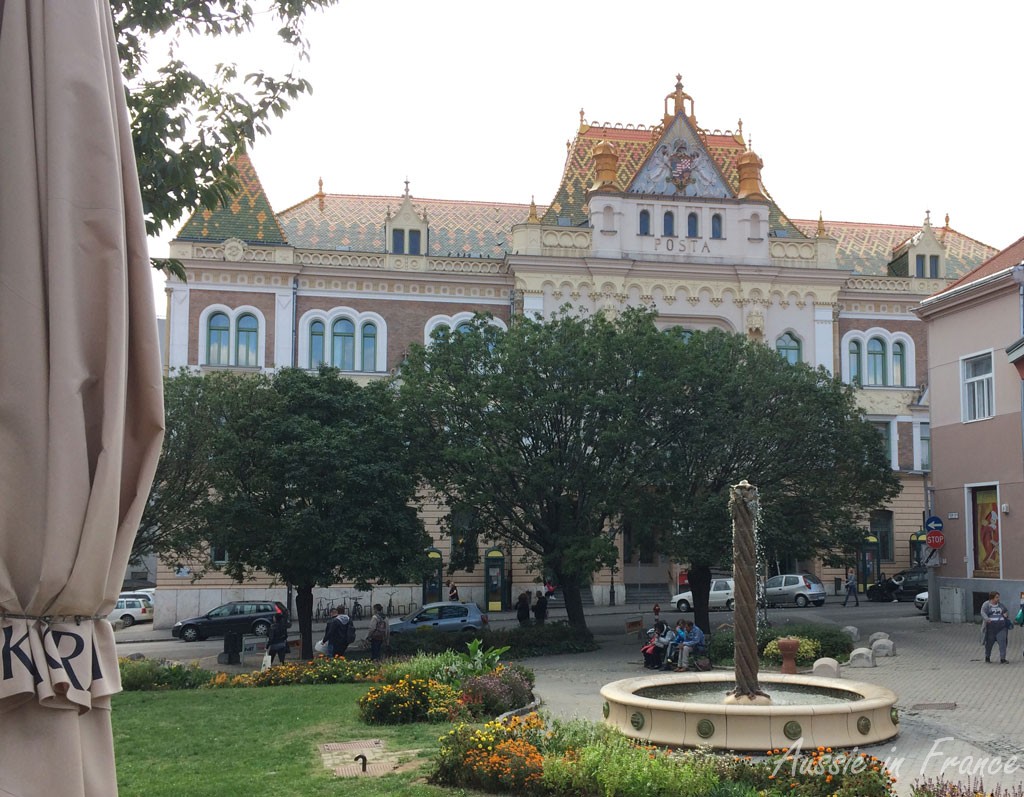 The only Art Nouveau building we saw in Pecs

We also stop off at the Tesco hypermarket in the hope of finding a hard drive. We come across the same problem as before although they do have an all-in-one hard drive for 80 euro. I buy a 10 euro memory stick instead. We kill two birds with one stone and stock up on yoghurt and local wine as we’ve come to the end of our Italian stock. 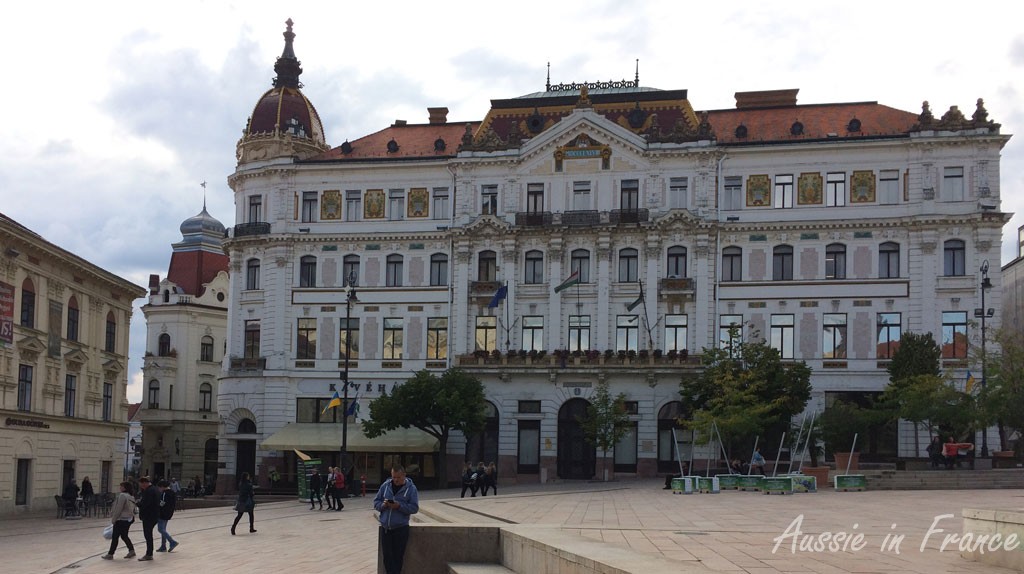 The main square in Pecs

Tomorrow, we’re cycling on the Danube at last because the temperature will be 18°C in the afternoon.

8 Responses to Baja and Pecs – a few surprises