Outdoor swimming at 4°C in Normandy

Posted on November 3, 2011 by Rosemary Kneipp

‘Twas the day before Christmas and the ground in Normandy was covered in snow. So we decided to try the outdoor pool in Rouen. We had a lot of trouble finding it, despite the Tom-Tom because it was in the middle of an enormous housing estate. We picked our way carefully along the path from the car, making sure we didn’t break our legs on the ice and slush before we got to the pool.

Inside, there was a 25-metre pool and a smaller children’s pool. The 50-metre was outside. You got to it by going down into a pool on one side then swimming through one of those plastic strip curtains out to the other side where you could see the steam rising off the water. Relationnel, who’s happier walking up mountains than swimming, remained inside to “warm up”. When the cold air struck my head despite my swimming cap, I started swimming energetically. After about 300 metres, I decided to go indoors. Every time I took my head or a limb out of the water, I was cold despite the fact that the water was 28°. And the snow-laden fir trees I’d somehow imagined as a backdrop were missing. Just urban suburban.

I met Relationnel on my way back through the strip curtains but he only did about a half a lap before scuttling back inside. I was much happier doing my laps out of the cold I can tell you. 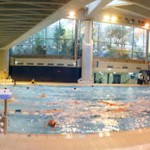 I usually swim in the Suzanne Berlioux pool in Les Halles in the middle of Paris. I discovered recently when taking some Aussie friends for a walk in the area that you can actually look down on the swimmers from above. It was a bit eerie. When you’re swimming, you can’t imagine it. In any case, you’re so busy making sure that you don’t get drowned by people (mainly men – why aren’t they swimming in the fast lane?) pounding their way past you that you don’t have time to notice your surroundings. I’ve finally discovered a time when it’s reasonably safe – Tuesday afternoons. I once suggested to one of the monitors that they should have a special lane for brutes. She replied that they would need too many!

I find it difficult to imagine how you can be breastroking away and someone actually backstrokes into you. And how they can bang into you when you’re backstroking and they’re breaststroking is even more incomprehensible. I was swimming away the other day perfectly happily on the right side of the lane (as I should have been) when I saw someone coming towards me at a fast crawl (ha! ha!) in MY LANE for no apparent reason. It was difficult to know where to go but they swerved back at the last moment thank god.

The people I dislike the most are the ones that swing up and down like monkeys from the ring at the end of the pool. It’s OK it you’re doing breaststroke or freestyle but if you’re doing backstroke you can be walloped in the head by their rear end as they swing back.

What I’d really like is to have the pool to myself.

2 Responses to Outdoor swimming at 4°C in Normandy