The Silver Net on the French Ministry of Culture 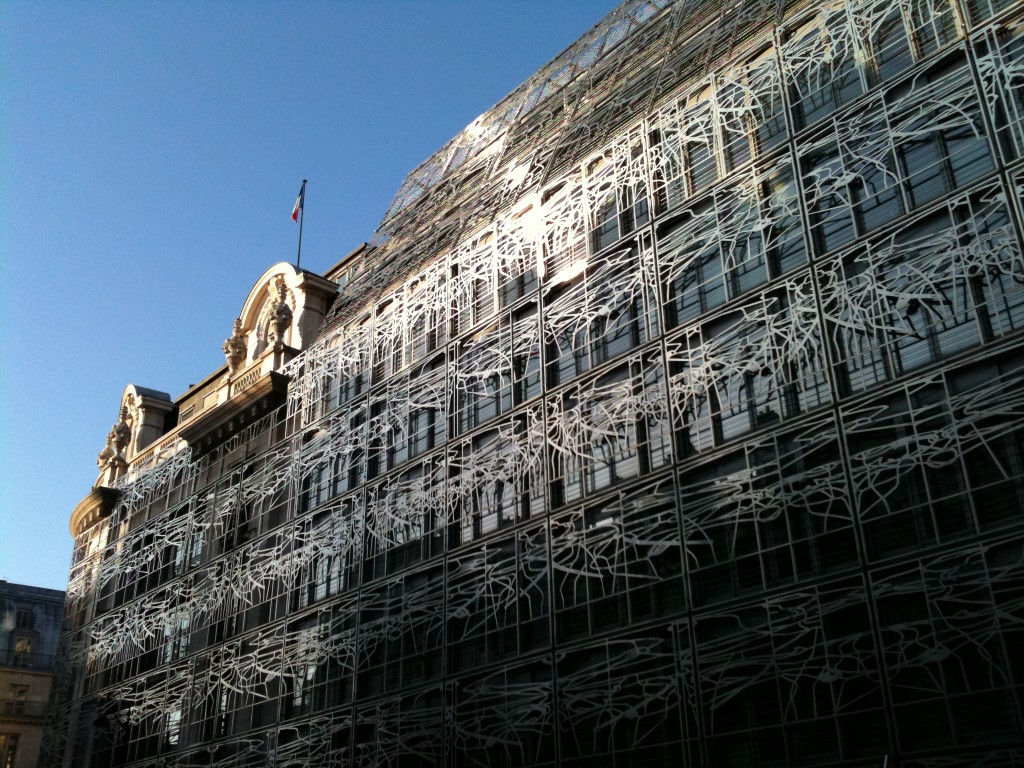 I’m sure you’ve noticed this building across the road from the Louvre on the corner of Rue Saint Honoré and Rue Croix des Petits Champs, just down the road from Café Louise, and wondered what it is. Well, it’s the Ministry of Culture and Communication and I’m sure you’ll believe me when I tell you it’s based on an Italian Renaissance painting by Guilio Romano depicting the Palazzo Te in Mantua. I recognised it straight away as well. Well, I’m sure I would have if I’d known the painting in question. It’s so distinctly Renaissance.

It’s called “Résille argentée” (The Silver Net) and is by the architect Francis Soler. It covers two very different buildings, one designed by Georges Vaudoyer in 1919 and the other by Olivier Lahalle in 1960 and is designed to give them unity. According to Soler he deformed the people in Romano’s  painting by computer until they “dissolved into arabesques”.  Ah ha, now you know. The beauty of it is apparently that when you’re inside, the résille doesn’t stop you seeing outside but stops anyone else seeing in.

“The résille, entirely made of laser-cut stainless steel sheets, envelops all the urban and peri-urban façades of the project. It is both light and intrusive but never unwieldy. The way we perceive it changes according to visible, often contradictory values – shininess and dullness, delicacy and depth, fine chiselling and hazy contours, figuration and abstraction. It is both body guard and confidential. It is both armour and coat of mail, protecting the minstry from unwanted intrusion and contributing, by its proximity, to creating indescribable spaces that give the impression, once you’re inside, that you’re there and nowhere else”.

You gotta give it to him – he knows how to say it! I could never come up with that – it’s hard enough translating it! Then he explains about the light:

“All the light that penetrates the buildings is carved up and shaped by the résille on the façade. It strikes the resin floor whose hazel colour makes it look like sand. The resin surface layer, which is both transparent and uniform, encourages reflection [he’s just saying it’s smooth and shiny] and sends the light along the entire length of the covered walkways with their raspberry-coloured runners.” I wonder if they’ll let me visit?

This entry was posted in Paris and tagged Francis Soler, French ministry of culture. Bookmark the permalink.