A Laptop in a Plane 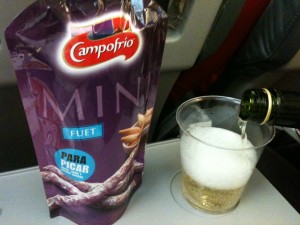 There is a first for everything. A laptop in a plane. Probably nothing new for most of you(I can hear my drummer brother saying “2time for a Mac, sister”) but until I bought my Dell about a month ago, I had never found a laptop I was comfortable with. The seats in these planes are getting smaller and smalller. Before you used to have a place to put your book or bag. Well Iberia doesn’t have anything. Also you pay for your drinks these days. I’m using my Asia Miles. The flight turned out to be more expensive than if I’d booked directly! Do not use your miles on short flights!

So we ordered our Cavo del Penedés (a natural sparkling wine it says in English) , fuet tradicional (long thin dried sausage affairs with miniature bread sticks) and pringles in lieu of the gin tonic and peanuts we usually have in planes. So I’m feeling very Spanish. Our home exchangers arrived this afternoon in Paris and we exchanged keys and they told us all the great places to eat in Madrid. We babbled away in English and Spanish (not Relationnel who just stuck to French) and we think we know how to get into their apartment in Madrid. 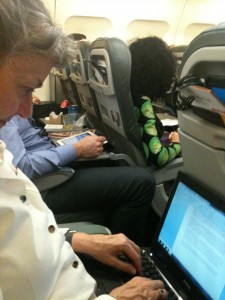 We nearly didn’t make the plane. Well, with luggage anyway. The day Relationnel told me he was “give or take an hour” I changed my whole attitude to life. I used to be give or take 5 minutes. I still am with planes. Our flight was leaving at 6.25 pm. Relationnel initially said that since we were taking a taxi we could leave at 5. I insisted on 4.30. Still no news at 4.12 so I sent an SMS. No answer. I waited another 5 minutes and phoned. “Just closing up the office”. He arrived at 4.26 telliing me the taxi was on its way.

We live in the middle of Paris and were going to Orly. The traffic was unbelievable. They have these special bus and taxi traffic lanes but they were full of buses and taxis … I remained very calm but I was sure we weren’t going to make it. We had this young driver that managed to weave in and out of the traffic with frightening determination. We arrived at the desk after they had closed the baggage check-in. Fortunately we had reserved our seats and boarding passes on-line last night. 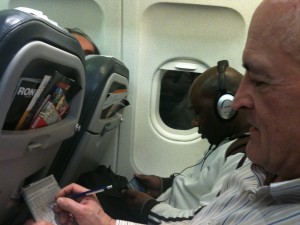 We were sent to another desk. Our flight hadn’t boarded but it was too late to check in our baggage. “Just one”, I said in French and she checked her computer again and said “OK”. This other guy, a Spaniard, was trying to get her attention, but it was too late. His flight was closed. She asked me how come we were late and I explained the awful traffic and she commisserated. Thank goodness. Of course, when we finally got to the waiting lounge, it wasn’t even boarding. I even had time to buy a book.

The moral of this is that you should leave plenty of time to get to the airport. Traffic in Paris is entirely unpredictable. Next, it’s better to take public transport! Madrid, here we come!

This entry was posted in Lifestyle, Paris, Travelling. Bookmark the permalink.

6 Responses to A Laptop in a Plane