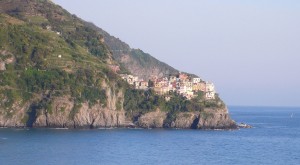 Several times, when holidaying in Italy, we drove down the Italian coast from Genoa along a highway perched far above the sea. It seemed obvious to me that there must be some wonderful little villages and breathtaking scenery down below, if only we could get to them. Once, we tried, but only seemed to find one of those horrible strips of built-up beach front where you crawl along at a snail’s pace with high-rise buildings with balconies on one side and ice-cream parlours and amusement centres on the other. 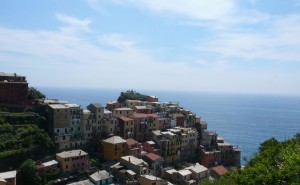 Then one day, someone mentioned Cinque Terre, which is a collection of five water-front villages difficult to access by car, but a breeze by train. I am a little afraid of heights and was rather worried about finding myself in a train perched atop one of those cliffs I could see from the motorway. I even did some hypnosis exercises so that I’d be able to do the trip. 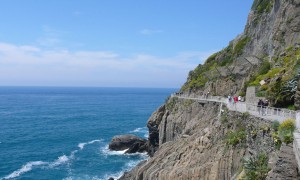 We chose to stay in Levanto rather than one of the five villages, mainly because of the prices and problems parking the car. It turned out to be an excellent choice. We stayed in a B&B called L’Antico Borgo outside the town which I can definitely recommend. After going along a rather scary road full of hairpin bends, we arrived at the village parking lot then walked down through a labyrinth of little streets to the B&B. The room was large, clean and comfortable with free wifi. It was a good breakfast for Italy, served on a terrace with a sweeping view of Levanto and the coast. Our hosts were friendly and helpful. 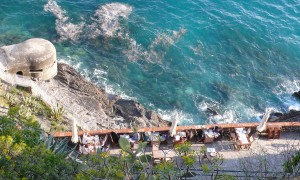 We then drove back to Levanto and parked at the train station. We later learnt there was free parking further away and that we should have immediately bought a two-day train pass that includes entry to the walking paths. The train actually runs through the mountain so that the villages are only 5 or 10 minutes from each other and there are no scary hilltops. They are also connected by mostly very easy paths provided they’re not closed due to bad weather as heavy rain can cause landslides. 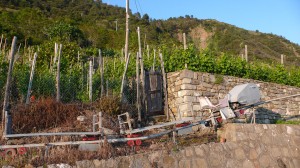 We chose Corniglia, way up on the top of a cliff, for our first evening. From the train station, you can take the stairs – all 282 steps – or walk up the road, which takes  longer but is kinder to the knees. We passed an amazing contraption used for grape harvesting. I booked a table at Intermezzo di Mananan for 8 pm and we went to see the sunset over the villages of Vernazza on the right and Manarola on the left. The restaurant was most entertaining, with the patron ordering everyone around and having a wonderful time. We had an excellent platter of grilled seafood with house wine. 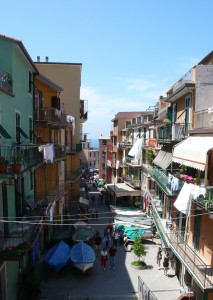 The next day we started with the last village on the train line, Riomaggiore. It proved to be full of tourists despite the fact that it was only May so we climbed up into the vineyards behind the village along a path romantically called “Via dell’amore” and took in the most spectacular scenery. We kept going until we reached the little fishing village of Manarola, only 20 minutes away, with its colourful boats in the main street. There we found a restaurant called La Trattoria La Scogliera on via Birolli where we ate some excellent fresh fish called boghe. After lunch, we went for another walk up through the vineyards.

We had intended to go by boat to Vernazza but it was too windy and the boat was cancelled. The n°2 footpath was also closed so we ended up taking the train. When we got there, we climbed up to the sanctuary from which we had a magnificent view of the village, the church, the fort and the bridge below. Our next and final stop was Monterosso, which is a small town rather than a village and even has beaches.

As we walked up the hill to the old town, we saw a restaurant whose tables had a magical seaview so we reserved a table. The centro historico has three churches including Saint John the Baptist with its black and white striped façade. From the Capuchin convent on top of a hill with its statue of Saint Christopher, we could see the other four villages and our restaurant, L’Ancora della Tortuga, below. It proved to be one of our best souvenirs of Italy! We had antipasti della mare and carpaccio pescata followed by octopus and monkfish with a local white wine. Excellent service  and beautifully fresh food.

The next morning, before leaving the area, we visited Levanto with its black sand beach and beautiful summer villas, stopping for a cappuccino with the locals before continuing on our journey.