After attending the local mediaeval flag festival at Bebbiano when we stayed at Corte Bebbi, the wonderful B&B in Parma that I have already described, we asked our hostess to recommend a balsamic vinegar factory, the challenge being that Relationnel needed someone who could speak French! A couple of phone calls later and we were on our way. 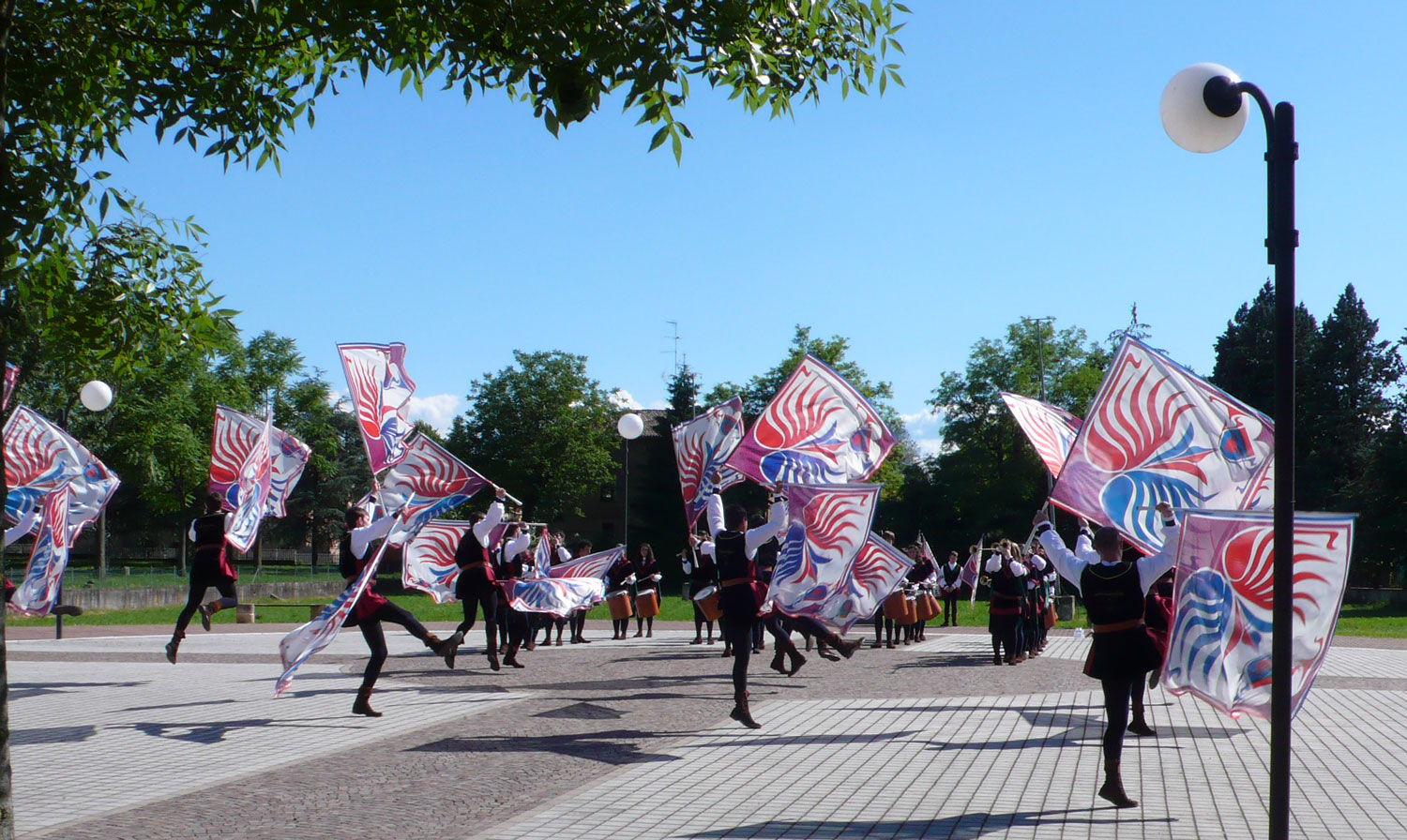 We received a warm welcome from Marco Pinicirilli at Acetaia Picci in Cavriago in the province of Reggio Emilia. After retiring from his job as an airline pilot, he took over the family’s traditional balsamic vinegar factory. Factory is hardly an appropriate word – it is actually a lovely 17th century family home covering several floors. On every floor there are casks vinegar in various shapes and sizes. Downstairs, it’s like a museum with beautifully kept tools and utensils from bygone days. 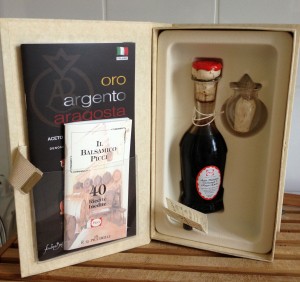 The must, produced from white trebbiano and lambrusco grapes pressed immediately upon harvesting,  is heated to 85°C for 36 hours until it is reduced to about 1/3 of its original volume. The resulting thick syrup is then aged in wooden casks in a specific order: chestnut, mulberry, juniper,  wild cherry and oak, each one smaller the previous one. After a minimum aging period of 12 years, during which the vinegar evaporates (quaintly known as the “angel’s share”), a small proportion is taken from the smallest cask and each is then topped up with the contents of the previous one. Freshly boiled must is added to the largest cast and the drawing and topping is process repeated every subsequent year. 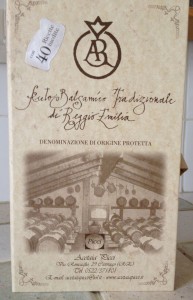 The fact that the casks are stored on various floors, particularly on the top floor under the roof, in a wooden house is very important. The variation in temperature helps the aging process – exactly the opposite of wine which needs to be kept at the same cool temperature all year round.

To receive the official label, balsamic vinegar must be aged for at least 12 (gold), 15 (silver) or 25 years (crimson). It has to be presented to a consortium or sort of guild each year (Mr Pinicirilli is a member of the consortium) for approval. If it is not given the official label, it is called condimiento. The only provinces allowed to produce traditional balsamic vinegar are Modena and Reggio Emilia. The two provinces have slightly different rules.

A woman’s dowry often used to consist of a set of 5 casks which were kept in the family. Balsamic vinegar making is not considered to be a full-time job, just an “extra”. Not hard to understand when you have to wait for at least 12 years before you can sell the first bottle!

After tasting a delicious drop of crimson balsamic vinegar, we nevertheless opted for the silver 100 ml bottle at 40 euro in its special box and little dropper, together with several bottles of condimiento at 10 euro. 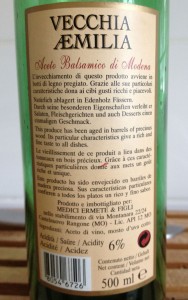 Obviously, the balsamic vinegar we usually buy is condimento grade (also called salsa balsamic or salsa di mosto cotto (cooked must sauce). It can be made and aged in the traditional way but without consortium supervision; or made by traditional producers, but less than 12 years old;  or made using the traditional method, but outside Modena and Reggio Emilia; or it can be made from ordinary balsamic vinegar with the addition of reduced grape juice in varying proportions without aging.

At the bottom of the scale is Balsamic Vinegar of Modena, made of wine vinegar with colouring, caramel and sometimes thickeners added. There is no aging so hundreds of thousands of litres can be produced every day. When buying balamic vinegar, you obviously have to examine the label very carefully first!

In Emilia-Romagna, traditional vinegar is usually served in drops on chunks of parmigiano reggiono and mortadella. It’s also used in tiny proportions on grilled meat, eggs and fish and even on fresh fruit such as strawberries and pears or on a plain gelato.

One Response to Real Balsamic Vinegar