This Wednesday’s bloggers’ round-up features two fellow Australians: Susan from Days on the Claise, compares two larger-than-life Renaissance monarchs, one from each side of the Channel, while Carina from Carina Okula captures Paris’ charming façades with her photographer’s eye before they disappear!

by Days on the Claise, an Australian living in the south of the Loire Valley, writing about restoring an old house and the area and its history. 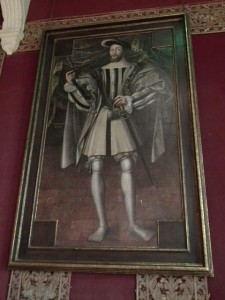 This portrait of Francois I at Chambord makes it clear to those of us who concentrated on English history at school and barely skimmed over the French that he is an exact contemporary of Henry VIII of England. (It helps of course to have done some costume or art history in the meantime too.) The two men were born within a few years of one another and died the same year. Neither were the expected heir to the throne when they were born. Both were very big men, physically, for their time, being 6′ or more. Read more.

by Carina Okula, an Australian photographer and rhildren’s craft creator living near Paris. She also has a blog.

Since we arrived in France twelve years ago, little by little, parts of Paris could be seen to be getting a makeover. Unused shop fronts would be taken over with new stores popping up and injecting life into previously vacant spaces. It was a good thing, and the cycle of life went on.

Recently though, the remodeling of the city has started to gather speed and move direction as the number of charming corner cafés, bistros, and boulangeries undergoing facelifts has increased.  Where once there were glorious mirrored panels and unique typography that housed the traditional establishments, modern lines of design are replacing those facades and interiors, and with them goes a part of history. Read more.

This entry was posted in History, Loire Valley, Paris, Sightseeing and tagged Carina Okula, Days on the Glaise, François I. Bookmark the permalink.