When is a castle not a castle? When it’s a chateau. 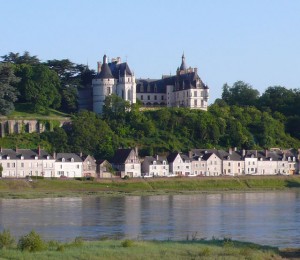 The two words have the same Latin origin – castellum, meaning fortress. The transformation from ca to cha in French is very common : cat/chat, cauldron/chaudron, cart/charrette, etc. In château, the “s” has done its usual disappearing act and turned into a circumflex e.g. pasta/pâte, feast/fête, master/maître. Then the “l” has been vocalised which means that it has become a vowel, which is another typical change, witness by camel/chameau and cauldron/chaudron above.

What is generally called a castle in English is actually a château fort in French. Prime examples are Chinon and Angers. Fort means strong and is obviously at the origin of fort/fort and fortress/forteresse. We have our Anglosaxon word stronghold. Châteaux forts had moats/fosses, ramparts/ramparts, towers/tours and keeps/donjons. 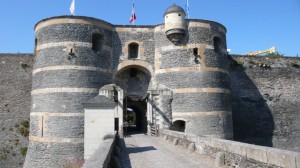 A château does not have to be fortified, nor even be royal, so what can and cannot be described in French as a château is somewhat nebulous.

The châteaux in the Loire Valley, such as Chenonceau, Chaumont and Chambord, were never built to offer protection but they were mostly owned and built by royalty. Others, such as Azay le Rideau and Villandry, were often stately homes built by rich financiers and such like with all the trappings of a château. I guess they could roughly be described as pleasure castles. 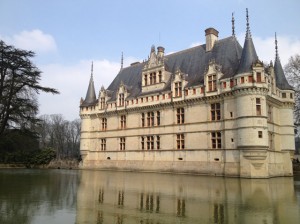 The plural of château in French is châteaux, but in English you can choose between châteaux and chateaus and there’s no obligation to keep the circumflex or chapeau as it’s often called in French.

There are two other common uses of the word château. In the Bordeaux area (bordeaux wine is written with a small letter, by the way, in both French and English), all vineyards are châteaux whether big or small. The same does not apply to other wine-growing areas in France (but the small letter still applies – champagne from Champagne, burgundy/bourgogne from Burgundy/Bourgogne, chinon from Chinon). 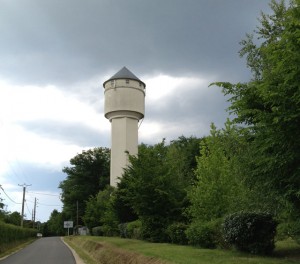 Then there is the château d’eau which is a water tower and, to me, is the strangest use of the word. They certainly don’t look like castles. I have to be honest and say that I had never noticed any water towers in Australia but in France, you can’t miss them!

Last, by not least, we have the château de cartes which is our humble house of cards.