Three very different posts have caught my eye this week for Wednesday’s Blogger Round-up. Mary Kay from Out and About in Paris informs us that the recently restored 500-year-old Tour Saint-Jacques in Paris, the starting place of the San Diego de Compostela pilgrimage, is open temporarily to visitors. Phoebe from Lou Messugo takes us through the stunning lavender fields of Haute Provence. And to finish off, the inimitable Bread is Pain talks about the question of changing personalities when you speak another language. I couldn’t agree more! Enjoy.

After 500 Years, Tour Saint-Jacques Temporarily Opens to the Public 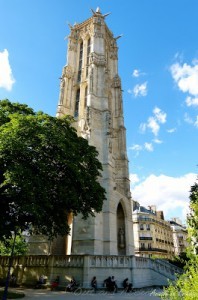 While Stéphane and I were sipping glasses of Perrier menthe and rosé on the terrace of Café Nemours on Friday evening, my ears perked up when I overheard an American couple at the table behind us talking about the 360-degree panoramic view of Paris from “that tower”. When the woman added that the vista of all the famous Parisian monuments was well worth the climb even though it had been hard on her knees, I nudged Stéphane in the ribs and whispered, “They’re talking about the Tour Saint-Jacques, the one I want to visit this weekend. We’re going to have to get up really early on Sunday morning to make reservations.”

After being closed to the public for most of its 500 year history, the Tour Saint-Jacques received permission to temporarily open its doors to visitors from July 5 until September 15, 2013.Read more 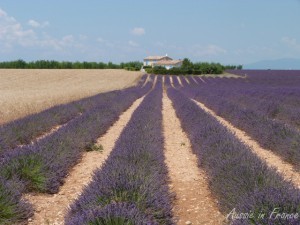 Last weekend we went to see the lavender fields in Haut Provence, something that’s been on my bucket list for a while now and I wasn’t disappointed.  That was a typically British understatement; I LOVED it! It was absolutely gorgeous.  The views, the smells, the colours, the bees, everything was just sublime. It was so great that I now want to go back and stay over night to be able to photograph the fields in the early morning and evening light.  Read more

From the corner of my eye I see my Mother watching me with a wry expression on her face.  I give her a look as if to say “quoi?!” and return to my conversation.  I am discussing, in French, the various differences between French culture and American culture with MB’s family; nothing out of the ordinary is being said so I am perplexed by my Mother’s seeming amusement.  Finally the conversation comes to an end and I stalk over to her in the corner.

“What was that, Mom?”  I ask, while mimicking the face she was giving me during the conversation. Read more

3 Responses to After 500 Years, Tour Saint-Jacques Temporarily Opens to the Public – Lavender fields of Haut Provence: a photo essay