It’s the next day after a wedding. Everyone’s having a late breakfast, including the groom who’s just joined us. The bride is still upstairs in their bedroom. This, of course, wouldn’t have happened in the olden days. They would have already been off on their honeymoon. 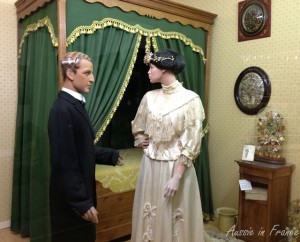 “As-tu consommé?” asks one of the guests. “Yes”, he replies, and everyone laughs. I am shocked! Fancy using the term consommer (to consume) in that context. How vulgar can you get. Then I realise that it must mean “consumate” as well.

I might add that it also means to perpetrate a crime …

It’s one of those French verbs that needs a different translation nearly every time in English. You could conceivably say “consume” in English when talking about food or petrol consumption, for example, but it certainly wouldn’t be natural.

On consomme beaucoup de fruits chez nous – we eat a lot of fruit in our family.

In fact, in English, we usually use the word consumption rather than consume, a typical case of a verb being replaced by a noun.

On the opposite end of consummating a marriage, you can say la rupture est consommée, meaning the break-up is complete.

Do you have any other examples?