I don’t usually write about grammar. I learnt French at high school in Australia where we did a lot of grammar in both English and French and, believe it or not, it was something that appealed to me, a bit like maths somehow. However I have some friends who are having difficulty with the reflexive so I thought I might try to help. 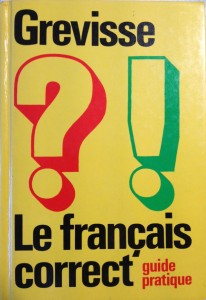 We don’t have reflexive verbs in English, of course, which is probably why they pose problems to people learning French.

I think most people get the concept, but have trouble organising where to put all those pronouns, especially when there is a second verb involved. I’ve been thinking about it and maybe the best rule of thumb is that the me, te or se and the nous, vous and se all have to be right next to the first person pronoun: je me, tu te, il/elle se, nous nous, vous vous, ils/elles se.

So if we go back to our verb from last week, s’embrouiller, we can’t say J’étais m’embrouillé because the me has to be next to the je. The sentence becomes Je m’étais embrouillé, although we’re much more likely to say Je me suis embrouillé (unless the second part of the sentence requires the imperfect, but that’s something else again).

Now, just to make things a bit more complicated, you need to make those past participles agree. Even the French often get this wrong, I’d like to point out. I always have my little Grevisse Le français correct so I can check if necessary.

So, the basic rule is that, with the auxiliary être, the past participle has to agree with the direct object if it’s before the verb. Well, this is the case here because me, te, se and so on are direct objects (or COD as the French say – complément d’objet direct). Je me suis coupée, ils se sont blessés, nous nous sommes habillées (if we’re all female) and nous nous sommes habillés (if there is at least one male).

On the other hand, in the case of je me suis brossé les dents, since it’s not me that I’m brushing, but my teeth, there is no agreement. . It’s because the direct object is after the verb. Other examples are elle s’est coupé le bras, nous nous sommes lavé les mains.

There are a few exceptions to this rule, but, frankly, unless you’re writing to be published, I wouldn’t worry too much : se nuire, se parler (parler à soi), se plaire (plaire à soi), se ressembler, se rire, se sourire, and a few more you’ve probably never heard of and will never need to use, i.e. ils se sont plu l’un à l’autre.

I hope you’re not too confused!

This entry was posted in French language and tagged Friday's French, reflexive verbs. Bookmark the permalink.