This Wednesday, Mary Kay from Out and About in Paris takes us to the newest shopping centre in Paris, Beaugrenelle, which even has a Marks & Sparks; Daisy de Plume from THATlou Treasure Hunt at the Louvre whom I will be joining on the evening of October 30 for her Death Hunt, introduces us to the Dance Macabre; while Genie from Paris and Beyond, who has a photo blog about Paris, takes us to the famous Rue d’Aligre. Enjoy! 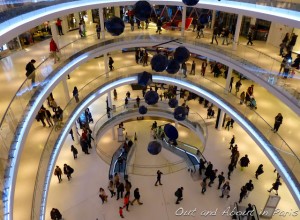 My neighborhood isn’t trendy like the Marais, exclusive like Saint-Germain-des-Prés or charming like Montmartre. It’s a residential area that attracts families who need an extra bedroom rather than hipsters who want to be close to the newest, latest, hottest spot in town. But thanks to the opening of Beaugrenelle Paris, my part of town is on the “must-see” list of Parisians this week.

For the first time since I’ve lived here, I walked out the front door of our apartment, strolled along the Seine, crossed the Pont de Grenelle and had easy access to stores like Guerlain, Baccarat, Michael Kors, Sandro, H&M, Zara and Desigual. I didn’t have to hop on a bus or fight the crowds in the metro. When it started to rain, I didn’t have to worry that I had forgotten my umbrella (again!) because I was safely inside the newest shopping center in Paris. Read more

by native New Yorker Daisy de Plume, who has lived in Paris for nearly a decade and created THATLou to share her passion for art and her unique approach toward making the museum experience fun and accessible to all. 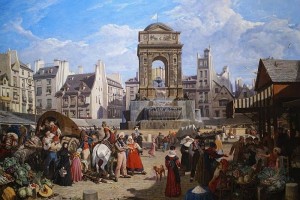 So yesterday we spent a sunny Sunday pondering the dead at the Cimitière des Innocents (CDI), once Paris’s largest and oldest graveyard smack dab in the middle of town (where the Renaissance Fontaine des Nymphs, aka Fontaine des Innocents** currently is, near the RER Les Halles station). We had just touched on how when space ran out, mass graves of 1500 cadavers per pit were filled, before they were closed off and a new one of equal size was dug. But we haven’t yet considered the business of death. Read more

by Genie from Paris and Beyond, who lives in Mobile and has loved Paris, its people, its architecture and all of France since she was eight years old. She has a photo blog about Paris and occasionally other places in the world.

Taken on a busy market day (Marché d’Aligre), there is scant room for café table and chairs.

Still, the pastries and a coffee (or thé) can be enjoyed as the market vendors shout out the quality of their wares.

One thinks that the price of the coffee and pastry is small for this front row theatre seat.

Click here to see the photo which I haven’t reproduced as a small photo would never do justice to the original.