An Easter Monday Birthday in Paris

Jean Michel usually takes me to a Michelin-star restaurant for my birthday but it’s Easter Monday which is a public holiday in France and there isn’t much open so we’ve postponed it until Wednesday. Instead, he surprises me by suggesting we go for breakfast at Angelina’s. I’m secretely a little disappointed because it means I’ll miss out on talking to my brothers and nephews but can I refuse breakfast at Angelina’s? 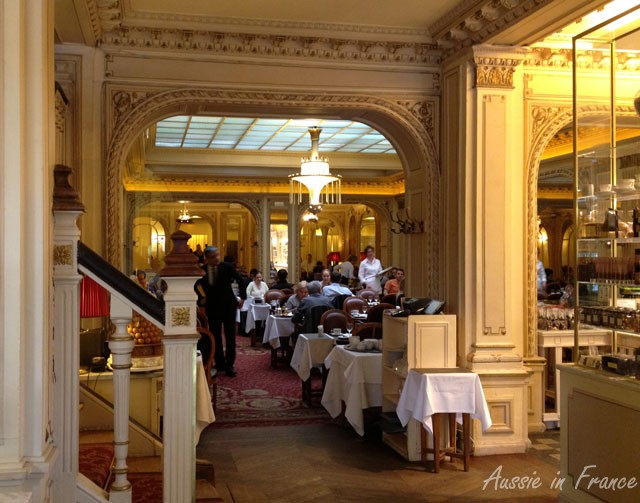 It’s spitting very slightly as we walk down Rue de Rivoli and we hope it will eventually clear up. At 9.30 am, the beautiful turn-of-the-century dining room is still half-empty and we order a full Angelina breakfast with mini croissants, pains au chocolat and pains au raisin, fresh bread rolls, thick hot chocolate (its speciality), scrambled eggs and fresh fruit salad. We can skip lunch! 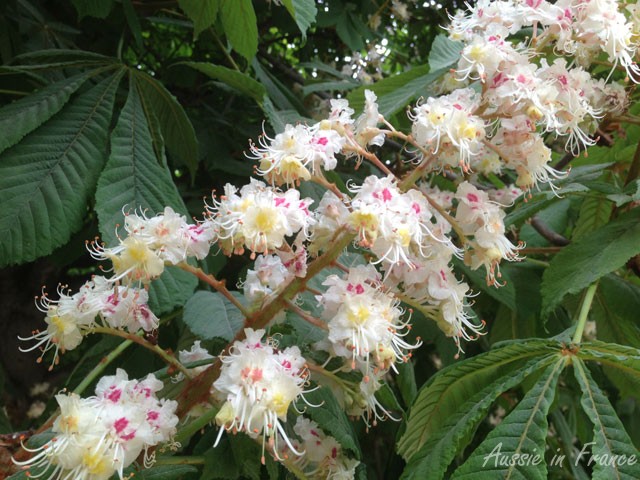 After breakfast, we wander through the Jardin des Tuileries and discover a large stone arch we’ve never seen before. Yet we must have passed it countless times. We notice the chestnut trees are in bloom. Jean Michel has always told me they’re the first trees to flower in spring but this year they are certainly not. I had never noticed the delicately-coloured flowers up close before – you can have white, pale yellow and pink. 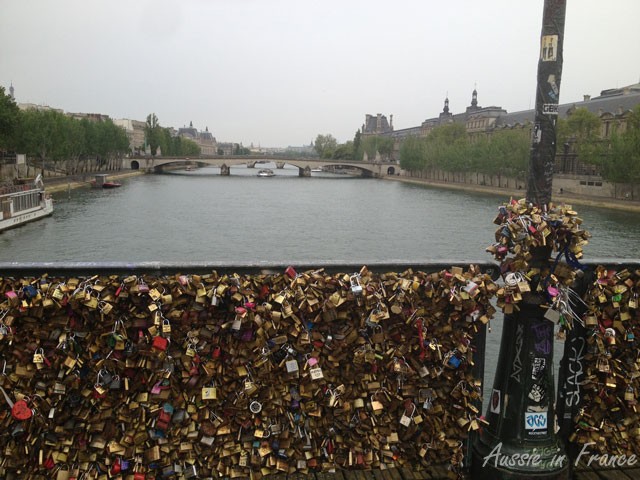 We cross the pedestrian bridge that leads to Orsay Museum which we’d love to visit but Monday is closing day so we continue on to the Pont des Arts where the number of lovelocks seems to have doubled since the last time we were there. They are even climbing, clematis-like, up the lamp-posts! It’s seems that as soon as they are removed, new ones appear. 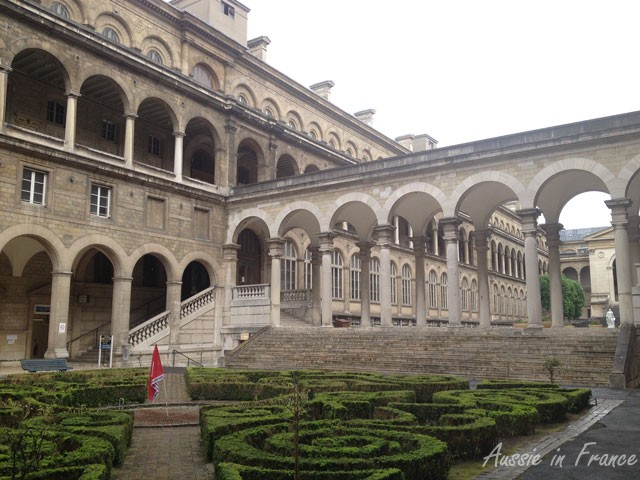 Jean Michel suggests we walk down to Ile Saint Louis for lunch (as though we’re hungry!). On the left, just before Notre Dame, I see a sign for Hôpital Dieu (God’s Hospital), the oldest hospital in Paris, which we’ve never visited. Despite the overcast day (I always prefer a blue sky!), the entrance looks very attractive. We walk in and it’s like an oasis of silence in the noise and bustle of Paris, almost deserted. We are the only ones in the garden. 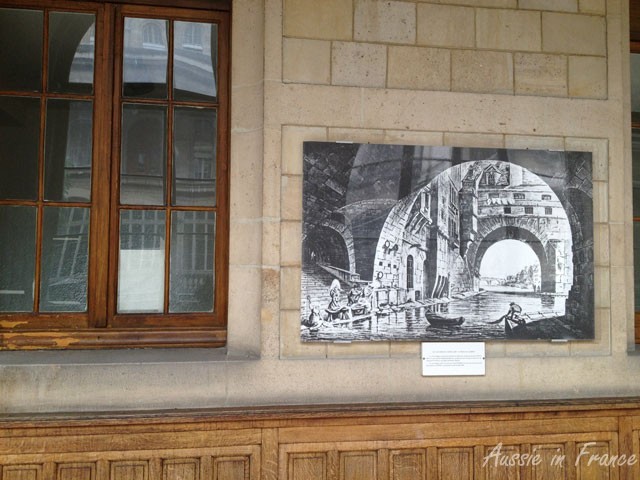 Etching on the first floor gallery of Hôtel Dieu

As we walk along the upstairs gallery, etchings of the past tell us the hospital’s story. It was built as a charity hospital in 651 and was added to over the centuries. The two original buildings were joined by two bridges, one of which collapsed from a fire caused by a barge overloaded with hay. Another fire destroyed most of the hospital in 1772. 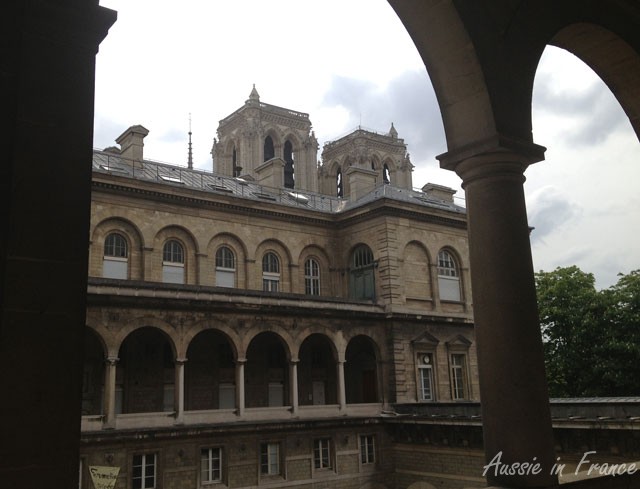 View of Notre Dame from the second floor gallery

The current buildings were constructed between 1864 and 1872 at the initiative of Baron Hausmann within the new perimeter of Notre Dame and completed at the end of the 19th century with the main entrance at 1, place du Parvis. 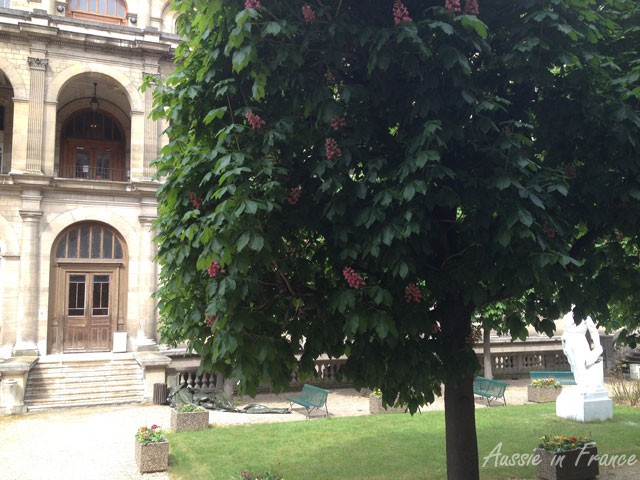 The etchings show the extreme youth of some of the novices – they look like mere children – and how the patients were lodged – often two to a bed. They had two meals a day – 11 am and 6 pm – which I find interesting. A visit from the Duchess of Orleans and her retinue one day caused such excitement that several patients died. Hmm. 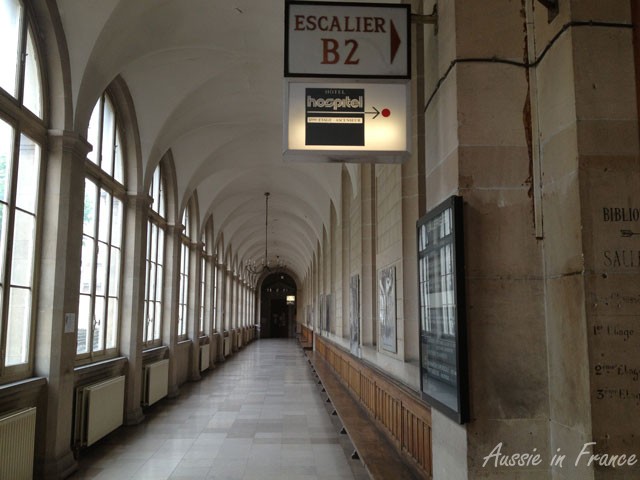 Then I remember that there is supposed to be a hotel here somewhere. We go down to the desk and ask. Yes, Hôtel Dieu Hospitel is in wing B2 on the 6th floor. There is a lift, fortunately, and when we get there, the lady very kindly offers to show us one of the rooms. They are all under the eaves, small, very clean, with an en-suite bathroom and wifi. I wonder about the heat in summer but all have air-conditioning. Two of the 14 rooms are suitable for people with reduced mobility. 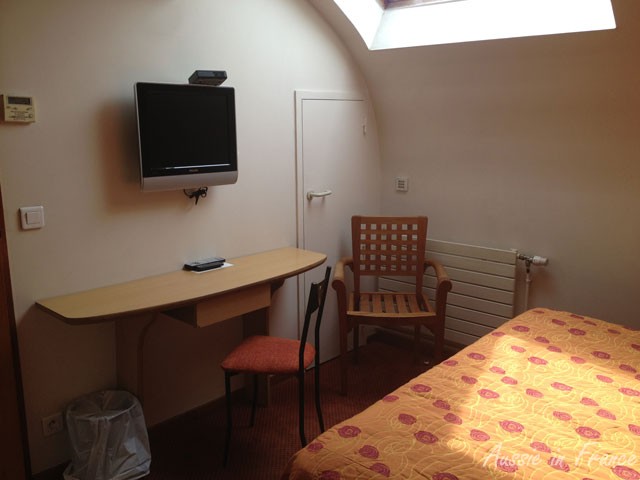 The hotel was initially built for outpatients and their families, but there is no restriction on guests and if you’re looking for somewhere peaceful  in the heart of Paris, this could be the perfect solution.  However, the hospital is threatened with closure so the hotel may not last for much longer.

Outside again, the sun is starting to appear and we come across a jazz band on the little bridge leading to Ile Saint Louis. We sit down on the edge of the pavement to listen. Ah, this is Paris!

12 Responses to An Easter Monday Birthday in Paris