There was a sign in front of our house this week saying fauchage which actually means scything or reaping. The word for scythe is faux. Obviously the council workers were not going to appear with scythes. Fauchage now also means mowing or cutting with machines. 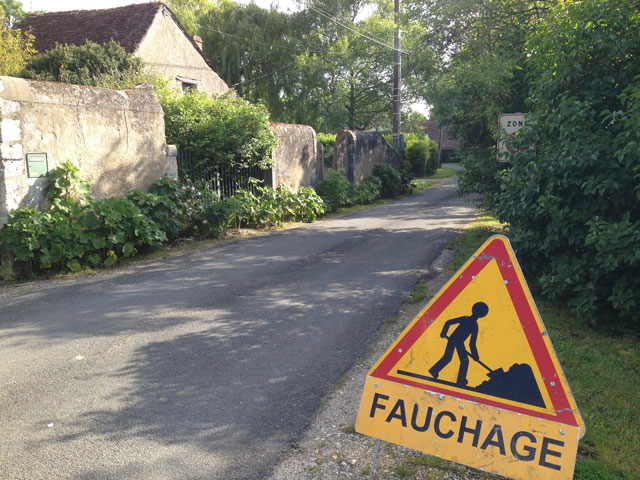 It got me thinking about the word faux which also means false. Faux meaning scythe comes from the Latin falx falcis whereas the adjective meaning false comes from falsus, from fallere, to deceive. I was a little disappointed to learn they actually have nothing in common! I’d worked out my own little scenario.

The verb faucher has a couple of other meanings. One you often (unfortunately) hear on the news has to do with car accidents. Il a été fauché  par un bolide = He was knocked over by a car going at top speed.

Il a été fauché par la Mort is a euphemism for death, since the symbol of Death is the scythe.

The noun fauche means thieving. Il y a beaucoup de fauche dans le métro = there’s a lot of thieving in the metro. But it’s not a word you hear often.

Fauchaison is reaping or mowing time (using a scythe, that is) but I don’t imagine it’s the sort of word you would really have much use for.

To go back to the adjective faux, it has a whole lot of other uses, all similar in meaning to false. Un faux billet is a forged or fake banknote while fausse monnaie is forged currency.

Faux marbre is imitation marble while faux bijou is fake or imitation jewellery.

Faux papiers , quite logically are false or  forged identity papers.

When someone says c’est faux, they mean it’s wrong or not true not that it’s false.

If you ring a wrong number, it’s a faux numéro, which somehow makes it sound as though you didn’t make the mistake.

An instrument that is faux is out of tune and not a fake which is interesting. Elle chante faux means she sings out of tune which is think is a bit hard.

And we all know about a faux pas, don’t we ?

I’m sure you’ve got other examples of faux.