Outside My Front Door

Paula McInerney from Contented Traveller, whom I’ve already featured in my weekly blogger round-up, is publishing a series of posts entitled “Outside my front door”.  I was delighted when she asked me to contribute and I’ve been enjoying hearing from other bloggers as well.

Outside My Front Door 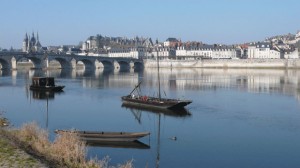 Outside my front door is a large expanse of trees and grass and on the other side is the Loire River, flanked by two levees, first mentioned in 1584, which is the exact same year in which my Renaissance house was built.

If I go left five kilometers along the river, I will come to the city of Blois, with its royal castle, built on a promontory overlooking the Loire, and former home of Louis XII, François I, the star of the French Renaissance, and his son Henri II. Read more

5 Responses to Outside My Front Door