Stories of Venice at the Accademia

We didn’t go to the Accademia in Venice last time and I’m not really sure what is awaiting us but the weather isn’t brilliant so a gallery seems like a good idea. Housed in the former Scuola della Carità, the Convento dei Canonici Lateranensi and the church of Santa Maria della Carita, all disbanded by Napoleon, the Accademia exhibits pre-19th century paintings. Surprisingly, there is no queue. 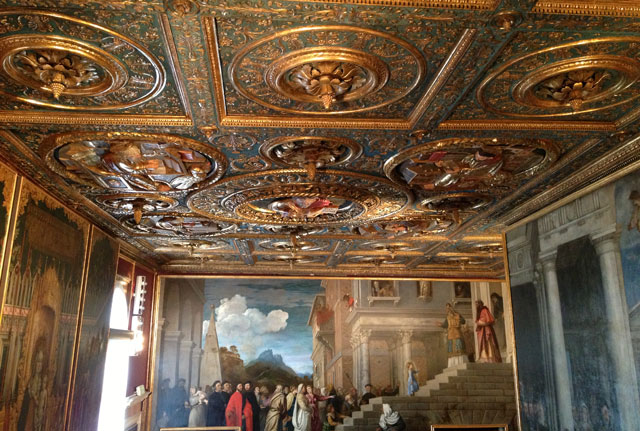 One of the first paintings that strikes me is a winged lion by Cima da Conegliano. We’ve been seeing these all over the city of Venice. The original is bronze sculpture which arrived in the Piazza di San Marco in the 12th century and came to symbolise Venice, as well as of its patron saints, St Mark. Whenever the Venetians conquered another city, they left a winged lion behind. 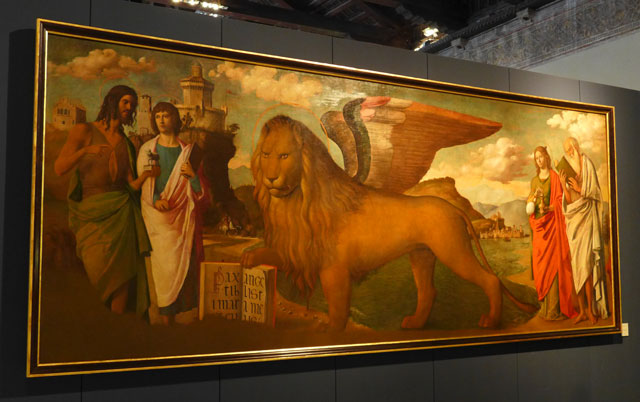 Opposite is a painting by Paris Bordone in 1534, showing the legend behind the tempest that struck Venice on 15th February 1340, in which a gondolier returns Saint Mark’s ring to the Doge, Bartolomeo Gradenigo. 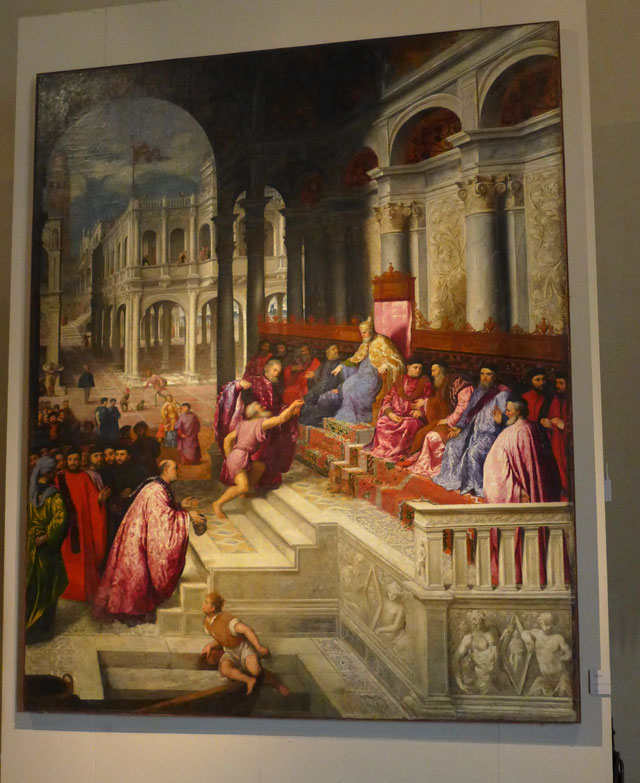 The Fisherman Presenting the Ring to Doge Gradenigo  by Paris Bordone

The Doge, who ruled the city, was partly chosen by lot and partly elected in several rounds or ballots (from the Italian pallote = small balls used as counters in secret voting) according to a complex elective machinery to minimize the influence of individual families that operated from 1268 until 1797. 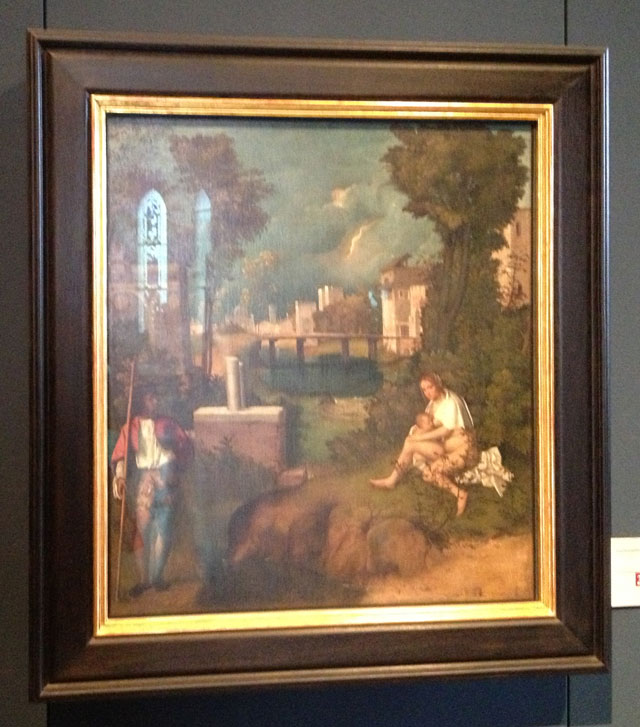 A much smaller painting called The Tempest, depicting a woman suckling a baby and exposing her pubic area, and a man, possibly a soldier, was painted in about 1506 by Giorgione, who died of the plague at the age of 32. The historians are not really sure what it’s about, but it is one of the first paintings in which the landscape is not merely a backdrop, but a feature. 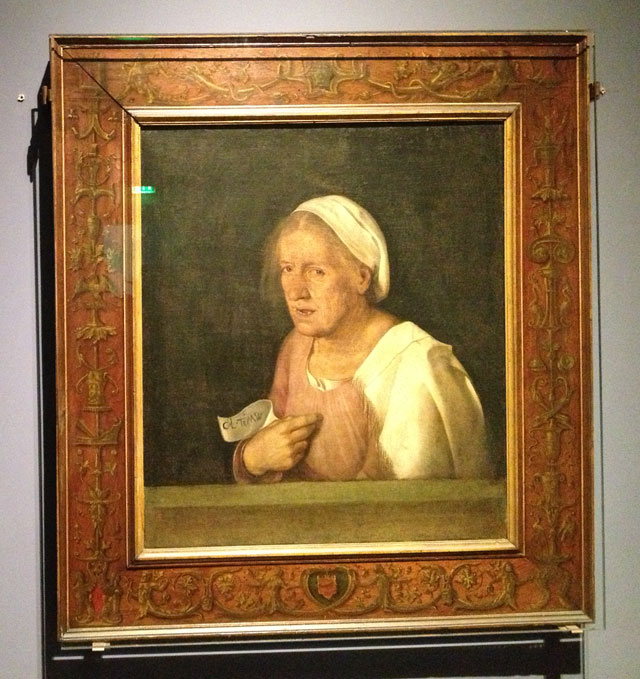 According to Philippe Solers in his Dictionnaire amoureux de Venise, a second painting, which we eventually track down in another room, called La Vecchia (the Old Woman) shows the same woman, fifty or sixty years later. Instead of a baby, she’s holding a paper that says COL TEMPO – with time. An allegory of Venice? 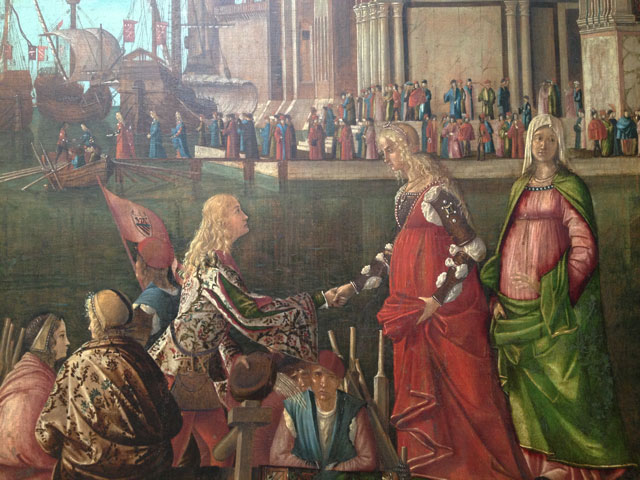 But the paintings that really fascinate me are by Carpaccio, who had disappointed me at the Louis Vitton store earlier in the week. Venice  is brought to life in incredible detail in his cycle of nine paintings entitled The Legend of Saint Ursula. There are the Venitian blonds, who used to bleach their hair on the top of the palazzi, on wooden terraces called altane, one of which you can see in The Tempest above, on the left of the tree. 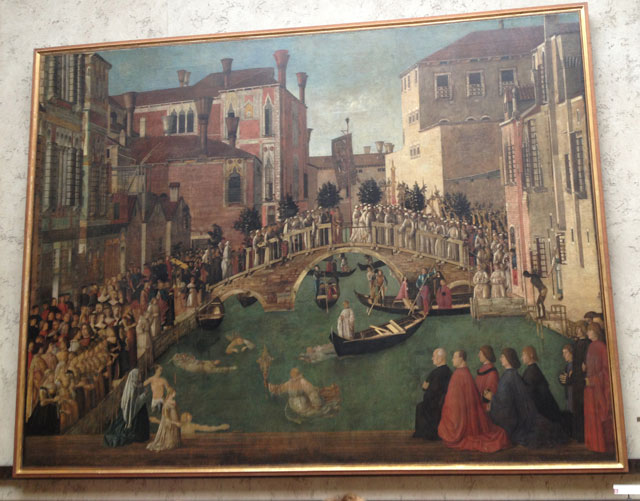 There is the old wooden Rialto bridge in The Miracle of the Relic of the True Cross with the gondoliers in much the same attitude as today except that they are wearing jerkins and hose and the tourists look a lot more elegant. 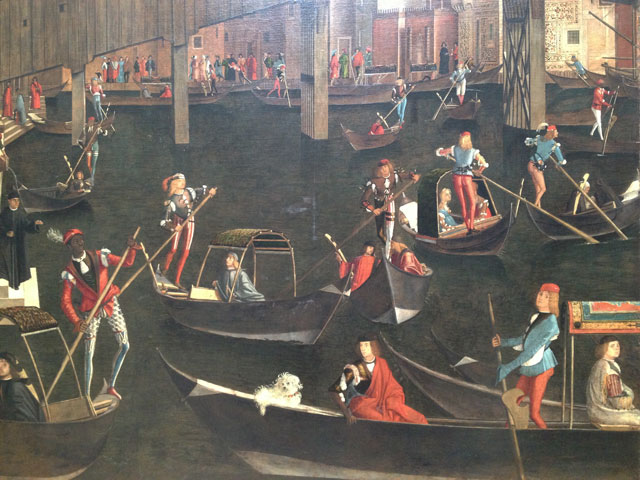 At the bottom of the Presentation of Jesus at the Temple, there is a little mandoline player who so reminds me of a childhood friend that I stop in my tracks. What concentration and independance! 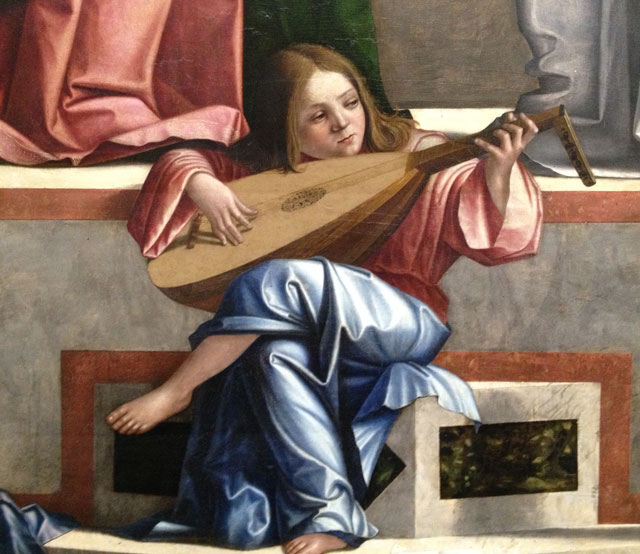 The mandoline player in Carpaccio’s Presentation

But the most impressive painting of all and one of the largest canvasses of the 16th century, is by Veronese. It is ostensibly a last supper but created such scandal that its name was changed to The Feast in the House of Levi. 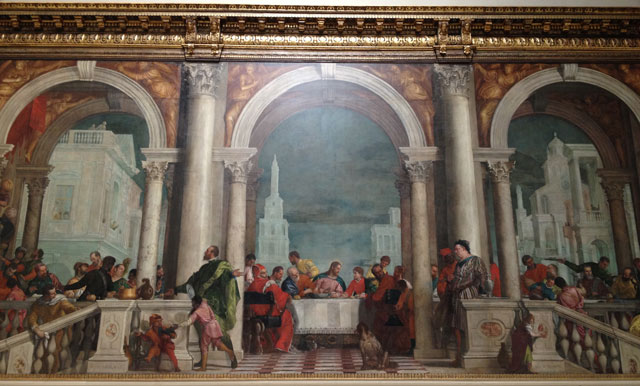 The Feast at the House of Levi by Veronese

Painted to hang  in the refectory of the Basilica di Santi Giovanni e Paolo, a Dominican friary, it was taxed with irreverence and indecorum by the church. Veronese was asked to explain why it contained “buffoons, drunken Germans, drawfs and other such scurrilities”, as well as extravagant costumes and settings, depicting a Venetian patrician feast.

Rather than change the painting as ordered, he changed the title and that was the end of the story! I haven’t enjoyed an art gallery this much in a long time!

3 Responses to Stories of Venice at the Accademia