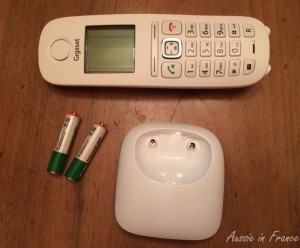 He is not correcting my French. Pile is the word I first learnt for the English battery back in the seventies and I was surprised when I started hearing people say batterie which has several totally different meanings. I assumed they were just using the English word.

But no, like many English borrowings, it has acquired a specific meaning. A batterie is not just any battery, but a rechargeable battery. It is also correct to say pile rechargeable but batterie is certainly more common in the technical world. 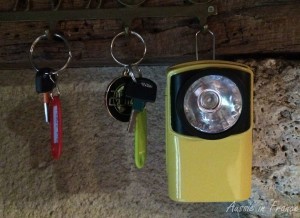 Another meaning of pile that I learnt early on is a square flashlight or torch as we call it in Australia, in any case. I had never seen them before I came to France. I don’t know if they are common in the other English-speaking countries. It’s real name of course is a lampe de poche, though it’s certainly far too big to put in my pocket!

A torche or, more correctly, une lampe torche is something else again. It’s a long flashlight, what for me is a normal torch.

Torche also means a torch  in the sense of an Olympic torch and what we call a flare on an oil rig.

Just to make matters more complicated you can have a batterie de piles, which is a serie of batteries, because batterie means a series of apparatus of the same type designed to be used or operated together, such as accumulators, condensers and electric ovens.

Une batterie de cuisine, for example, is a set of saucepans and frying pans.

To go back to pile, it also means a pile in the English sense of a pile of dirty washing (une pile de linge sale).

A pile is also a bridge pier and sometimes a bridge pile, but the nuances are too complicated to go into here because some bridges have both piers and piles and others just have piles!

This entry was posted in French language and tagged battery in French, flashlight in French, pile in English, torch in French, torche in English. Bookmark the permalink.