Posted on October 8, 2015 by Rosemary Kneipp

My Australian friend Jane first told me about Bamberg a couple of years ago but although it’s still in Bavaria, it’s a lot further north than the Danube. However, my iPhone says that the shortest route from Melk to Blois is via Nuremberg and Bamberg is only 40 minutes further north which makes it a good stopover on our way home. The weather forecast is also reasonable for visiting although it is not warm enough for cycling especially now that Jean Michel has a sinus infection. 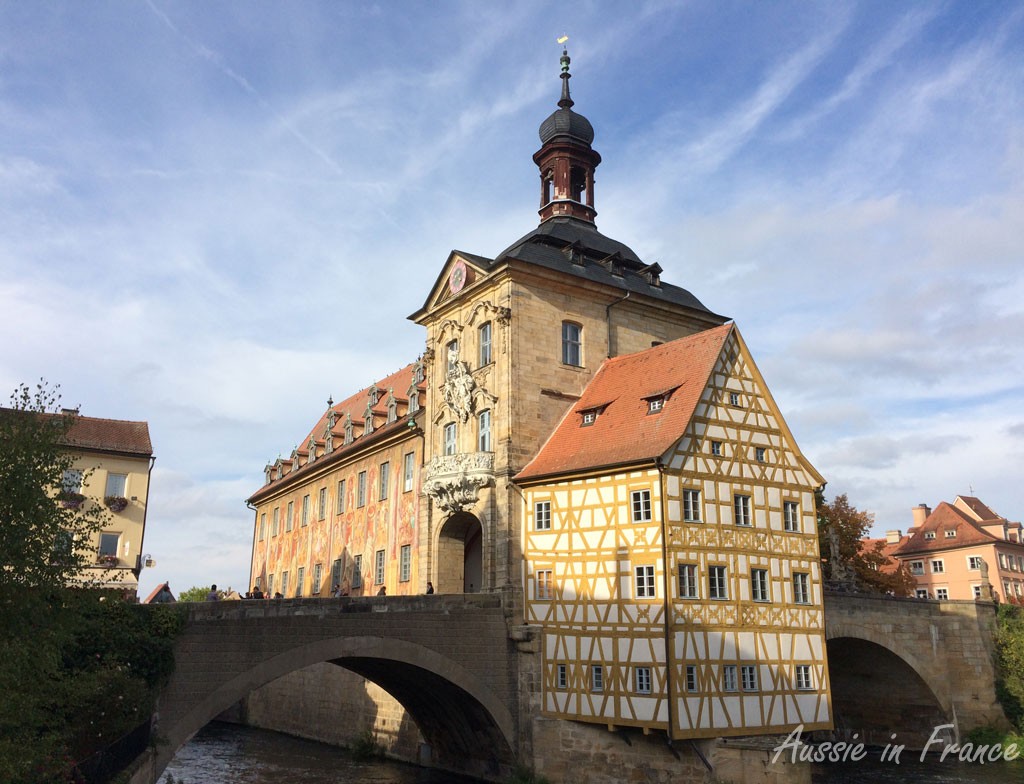 I find an apartment through booking.com that’s close to the historical centre and appears to be spacious. We haven’t been doing so well with out accommodation recently so I’m keeping my fingers crossed. As soon as we arrive in Bamsberg, we know we’re going to love it. The check-in for the apartment is at the Weierich Hotel. We can park in front of the apartment which is just opposite the hotel to drop off our luggage then park in a public car park about 10 minutes on foot for 8 euro per 24 hours which is very reasonable, especially after Hungary. 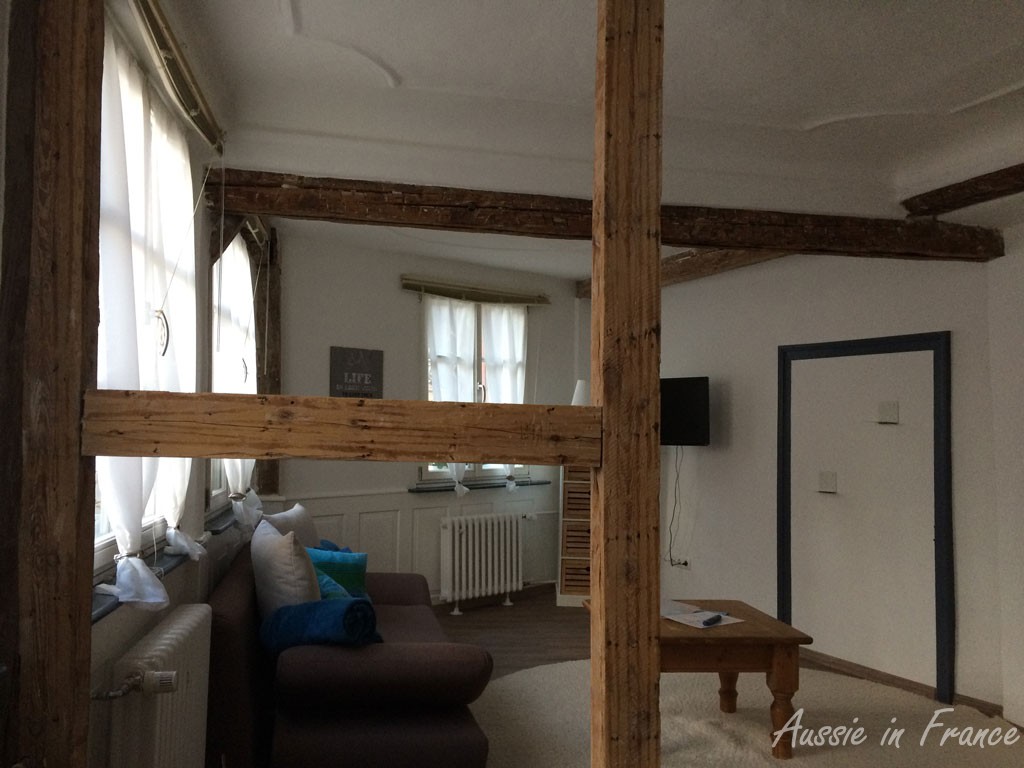 Our living room in Bamberg Apartments on the second floor, Lugbank 5

Jean Michel loves the apartment which is in a building constructed in 1510 (even older than our house in Blois) and has a bedroom, a large living room with 5 windows and a properly equipped kitchen at one end, a sort of sitting room and a bathroom, not to mention a small terrace with two gnomes. I’m relieved since I’m the one who chose it! 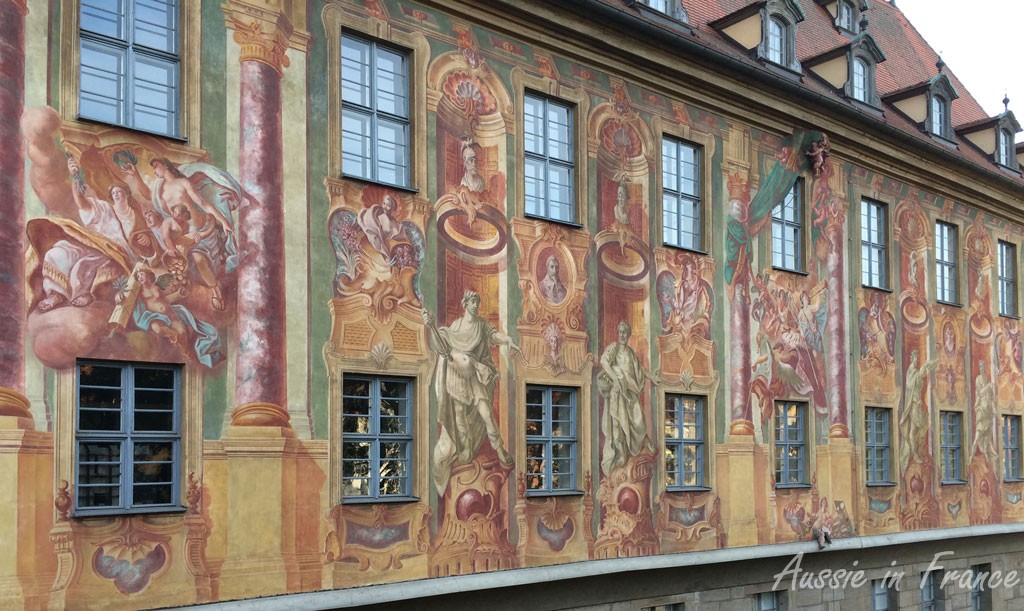 The frescoes on the wall of the Altes Rathaus. Have a close look on the right bottom.

The historical centre of Bamberg was added to the Unesco World Heritage list in 1993 because of its beautifully preserved mediaeval architectural ensemble. The first thing we see is the Altes Rathaus, or old town hall, Bamberg’s most emblematic construction built in the 14th century and rebuilt by the people of Bamburg after a fire in 1440. It is just a stone’s throw from our apartment. It was given  a Baroque and Rococco conversion in the mid-18th century and frescoes were added on both sides. We photograph it from every possible angle. 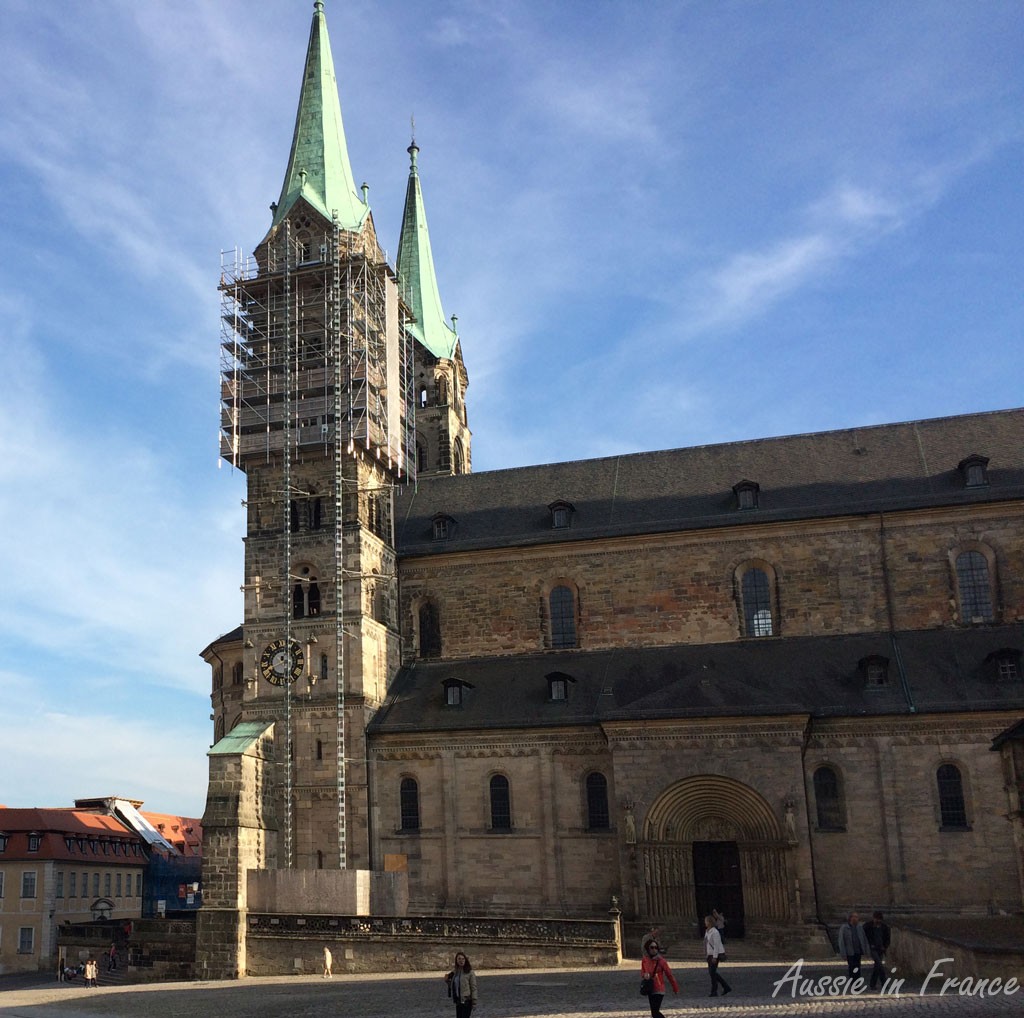 The Cathedral, showing two of its four steeples

We then walk up to the Imperial Cathedral of Saint Peter and Saint George on one of Bamberg’s seven hills. The second and present-day building was completed in 1237 and combines both late Romanesque and Gothic elements. 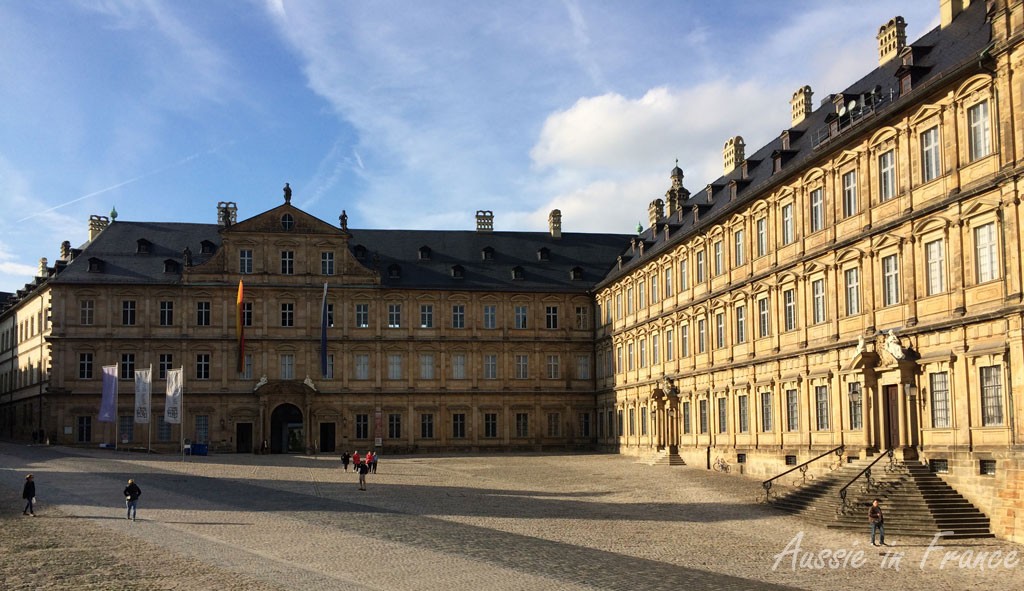 It fronts onto a large square with the turn of the 18th century New Residence on one side and the Old Court on the other. 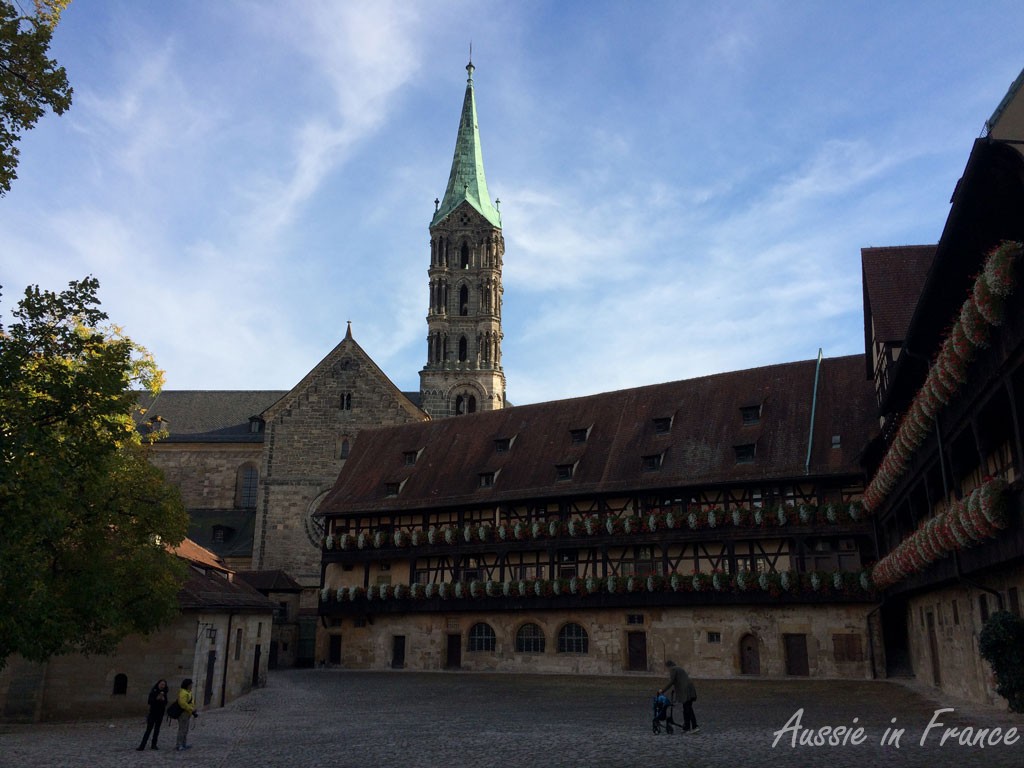 The lovely inner courtyard of the Old Court

We walk through to the splendid inner courtyard of the Old Court with its half-timbered buildings decorated with red geraniums. Now why can’t I grow geraniums like that? 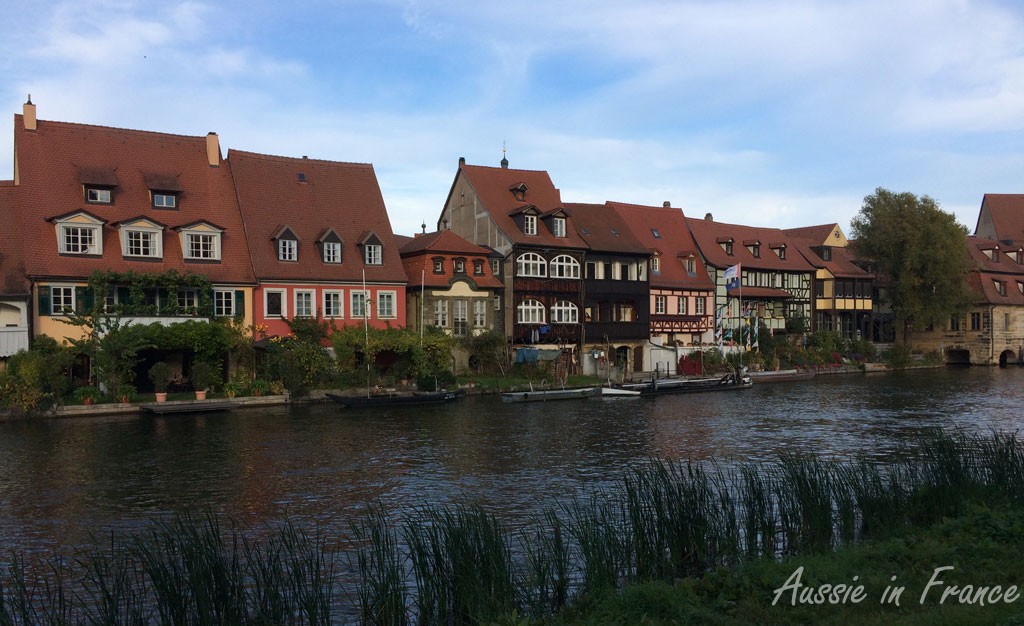 The fishermens’ quarter with its quaint houses

We walk back down to Bamberg’s Little Venice with its quaint fishermen’s houses along the towpath of the Regnitz River. 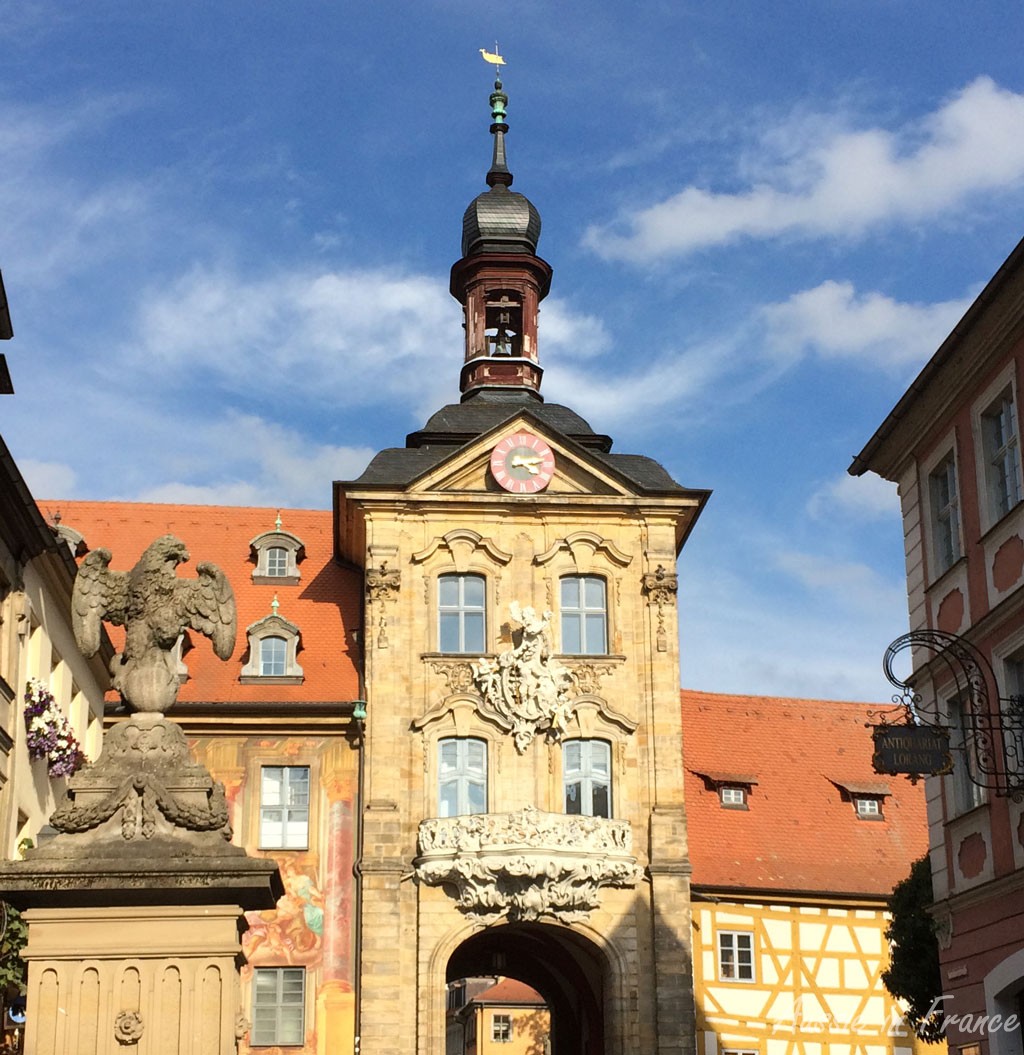 Front façade of the Altes Rathaus

From there, we go back to the Altes Rathaus and walk through the arch and over the bridge from which we can see the frescoes on the other side. 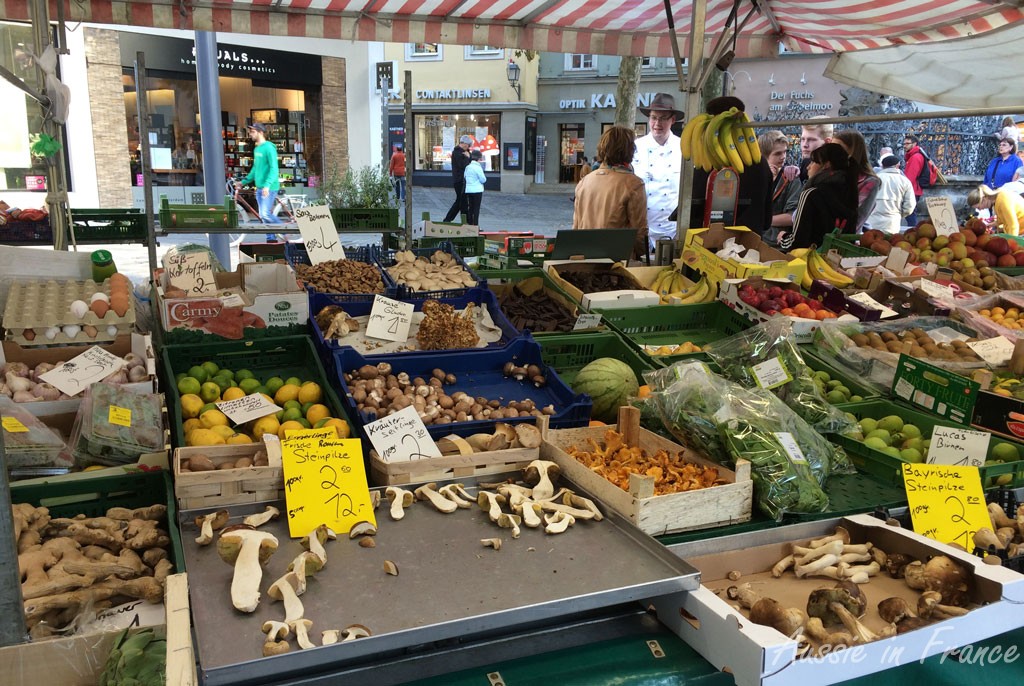 The Green Market is next with its many fruit and vegetable stalls, including wild mushrooms we’ve never seen before. 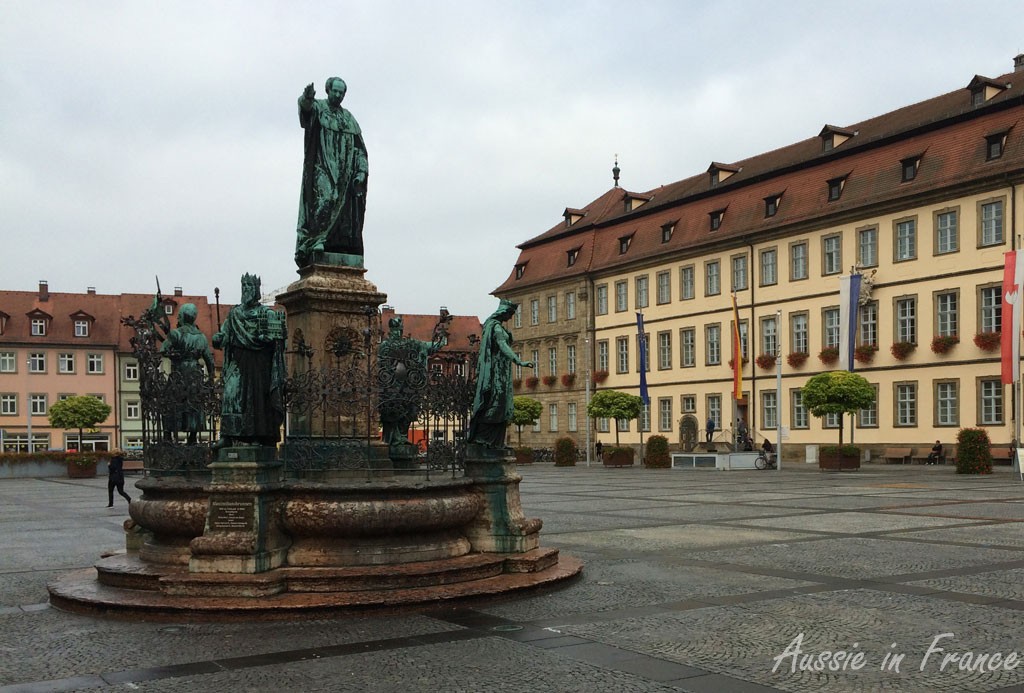 From there we go to Maximiliansplatz, the largest square in the town centre, dominated by the present-day town hall with its Baroque façade built from 1732 to 1737. 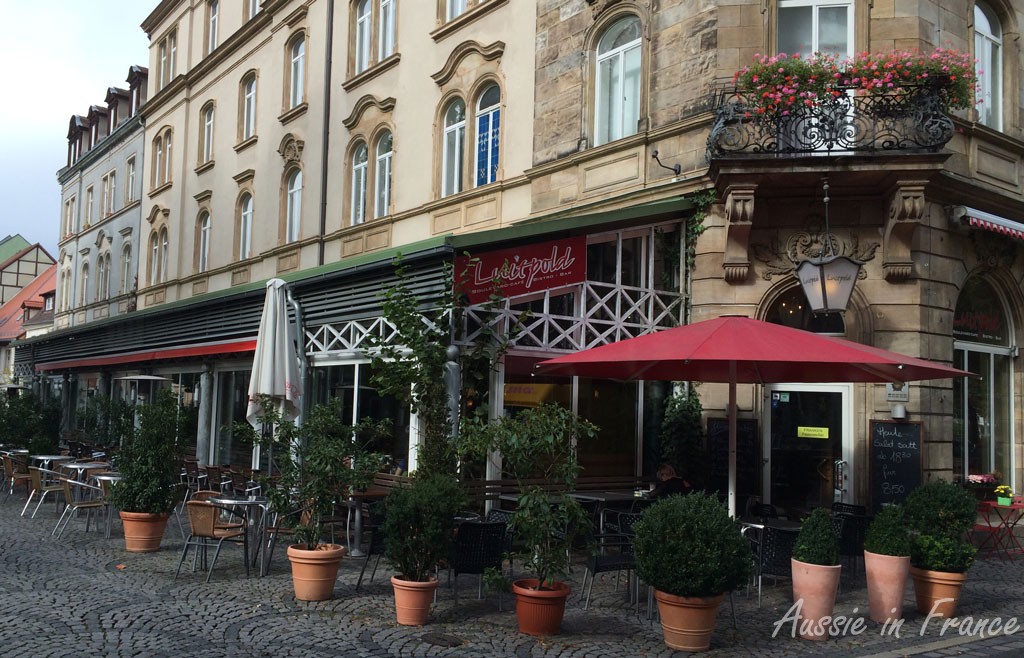 The café opposite Harmony Garden

We work our way back to the apartment via Harmony Garden where we stop for a drink. My feet are starting to burn – we’ve walked 10 kilometers in about 2 ½ hours, mostly on paving stones, but every corner reveals another beautiful or quaint building and we want to make the most of the sun. We know that it’s going to be partly overcast next day. 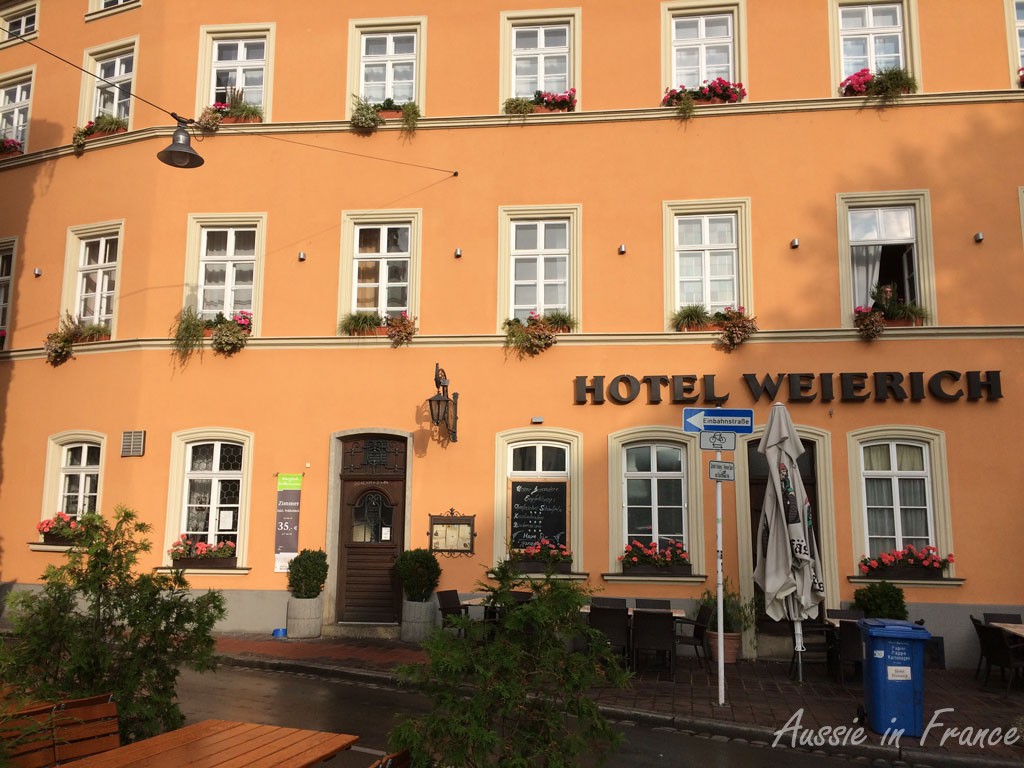 Back in our apartment, we have dinner (it’s an intermittent fast day) and I discover there is no hot water to wash up. Jean Michel checks the radiators and tells me two of them are not working, including the one in the bedroom. We go across to the hotel and explain the problem to the night watchman who only has very basic English but is very helpful. He finds the solution to the hot water (it has to be turned on under the sink) but it’s too late to do anything about the heating. He offers us a room in the hotel instead so at bedtime, we take what we need for the night across the street to the hotel. 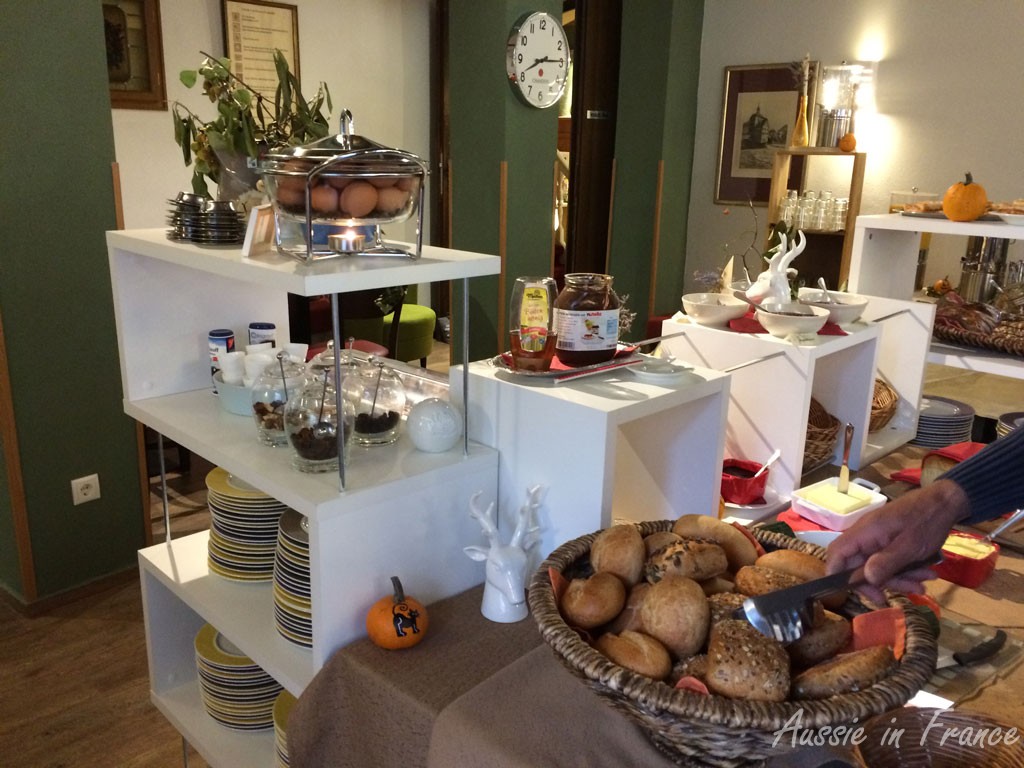 Breakfast at Hotel Weierich – best yet!

Next morning the girl at the desk tells us someone will look after our heating during the day. She asks if we’d like to have breakfast in the hotel (no extra charge). We accept and have the best breakfast we’ve had since we left home nearly a month ago! The brioche loaf is exceptionally delicious.

Back in the apartment we find the heating is working again and wonder whether the renovation work next door has anything to do with the problem. As we leave the apartment, the sun comes out and we cross a different bridge over the river and get another superb view of the very photogenic Altes Rathaus. 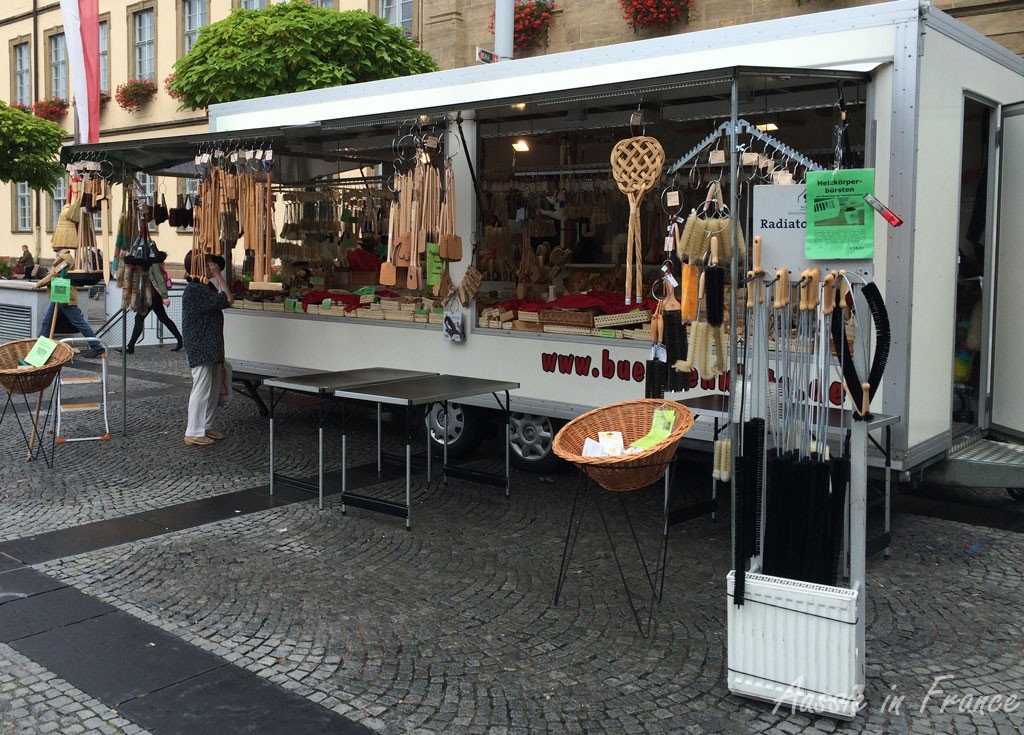 The broom and brush vendor on Maximilienplatz

We head for Maximiliansplatz to find a bookshop to buy a guidebook in French as our tourist brochure isn’t very adequate. On the way, we come across a brush and broom vendor, very similar to the one we found in Dresden last year. We buy a new broom for our hearth in Blois and put it in Jean Michel’s backpack.

The building we used to find the gardens

The sky clouds over and we decide to head for Bamberg’s market garden district owned by a dozen or so families on the other side of the river and which was responsible for Bamberg’s considerable commercial development in the middle ages. However, we have trouble finding it because of the poor indications but by studying one of the photos in the guide book, we are finally able to locate it. We climb up a leaning metal platform to get a bird’s eye view. 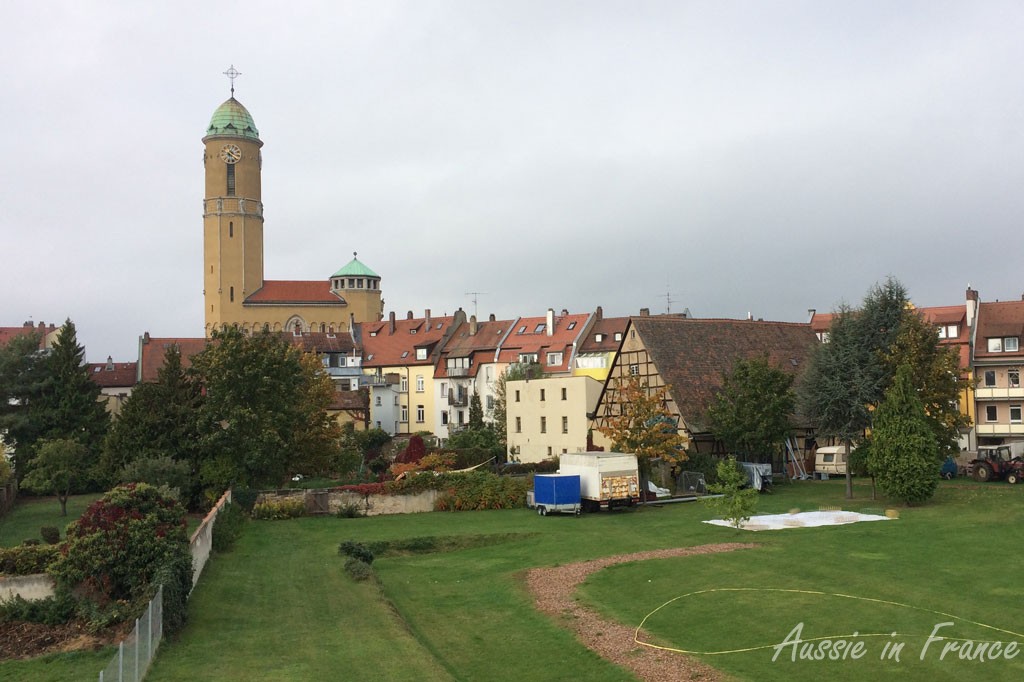 Unfortunately the little market gardeners’ museum is not open on Tuesdays so we eventually work our way back to the island in the middle of the city, having a cappuccino on the way to give my feet a rest. 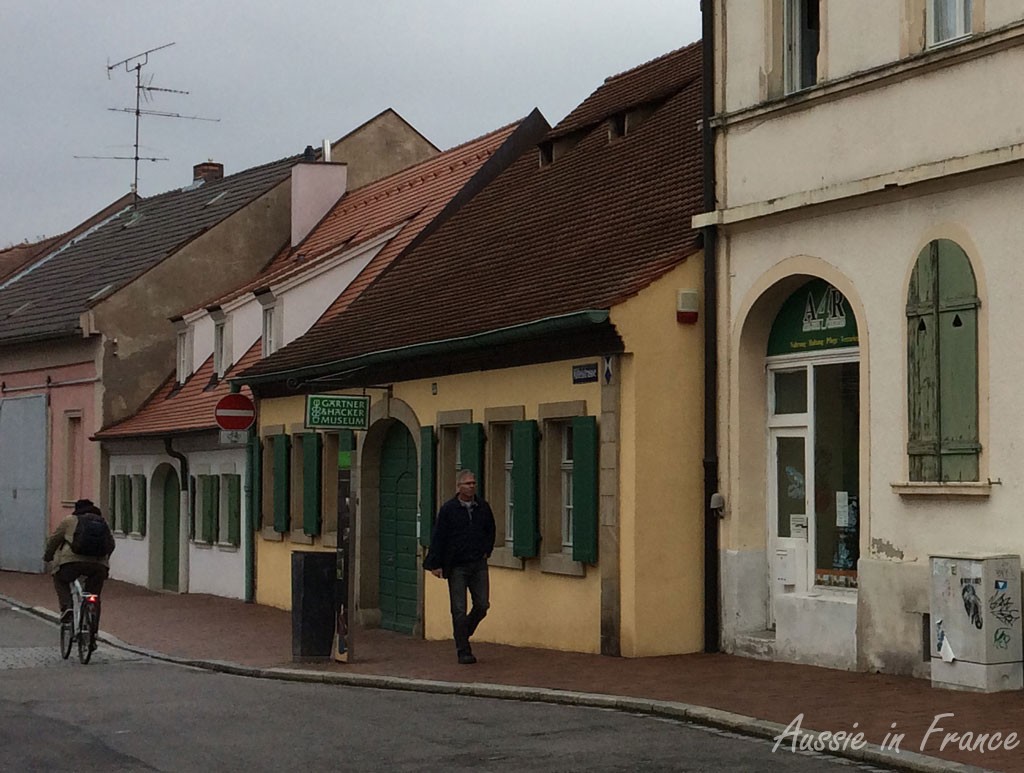 We follow the suggested itinerary in the guide book which includes several of the places we visited yesterday, but only from the outside. Near a lock and an old watermill, we come across a little ferry and cross the river . We are reminded of all the little ferries along the Danube and Rhine. Throughout the day we see lots of local cyclists and regret that the weather is not warmer. 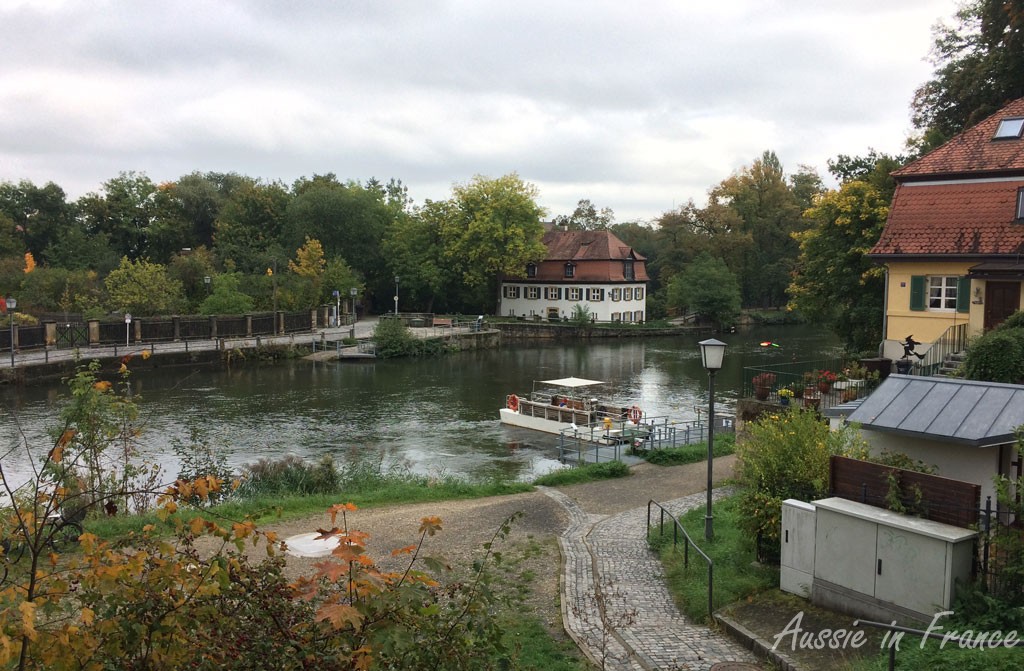 The ferry crossing the river from the old watermill

Our path takes us to the Imperial Cathedral and this time we go inside. Jean Michel starts reading the guidebook out loud but it is so detailed that I can’t take in any more. I gather there are three main things to see : a statue of an unknown horseman, circa 1250, the tomb of the imperial couple, Heinrich II and Kunigunde (1513), and the Marienaltar (1523). 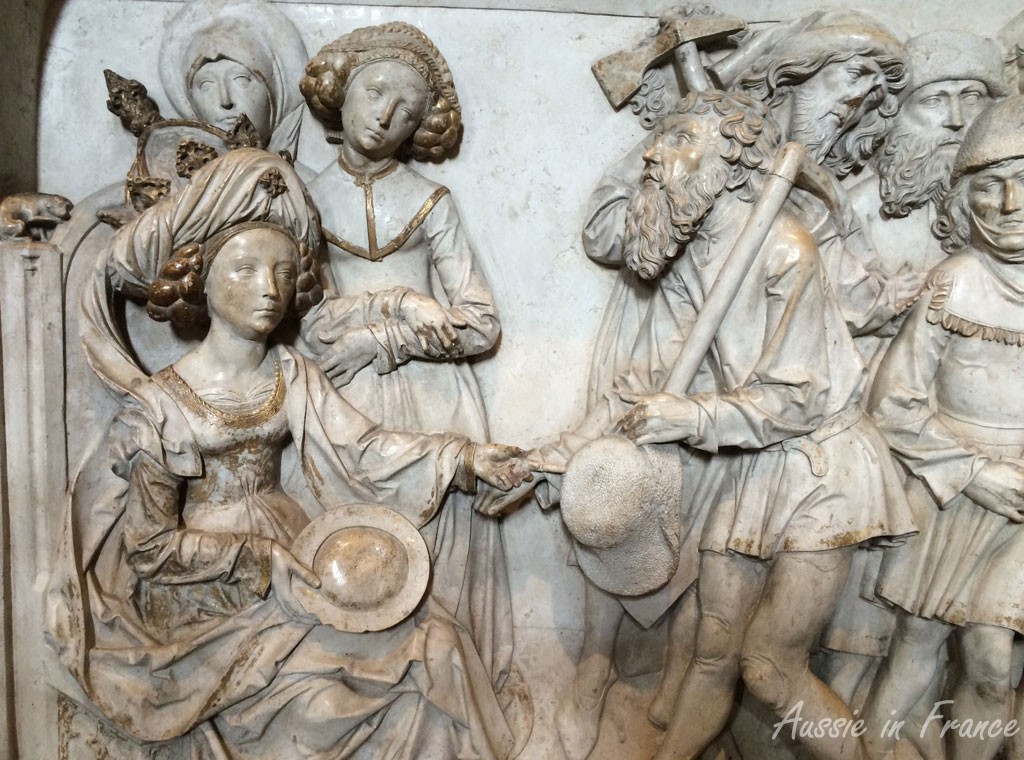 The Bamberg horseman is a little high up to appreciate the details but the Kunigunde carvings are quite fascinating. I consult the guidebook to find out more. 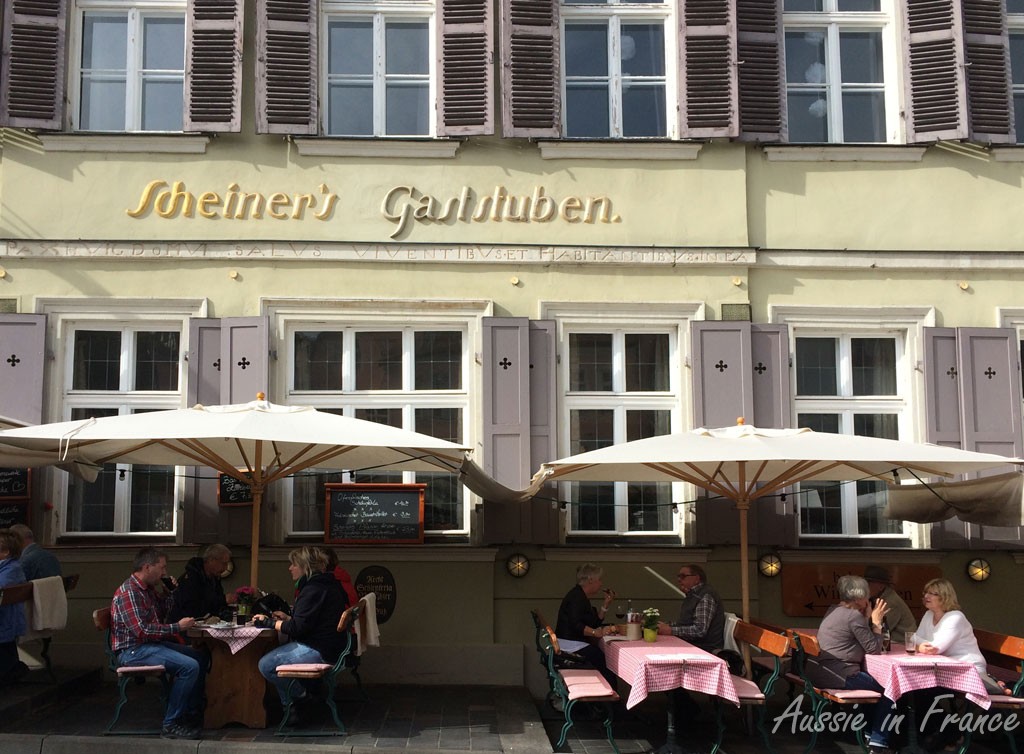 We’re now ready for lunch so walk down a flight of steps to the centre and find ourselves in a street with several possibilities. We choose Scheiner’s Gaststuben with its typical wooden benches and find ourselves a seat next to a German couple. We have a mixed sausage grill (gemischter bratwurstteller), sauerkraut and fried potatoes for 8.90 euro, very good value for money, and have a glass of local white wine to go with it. 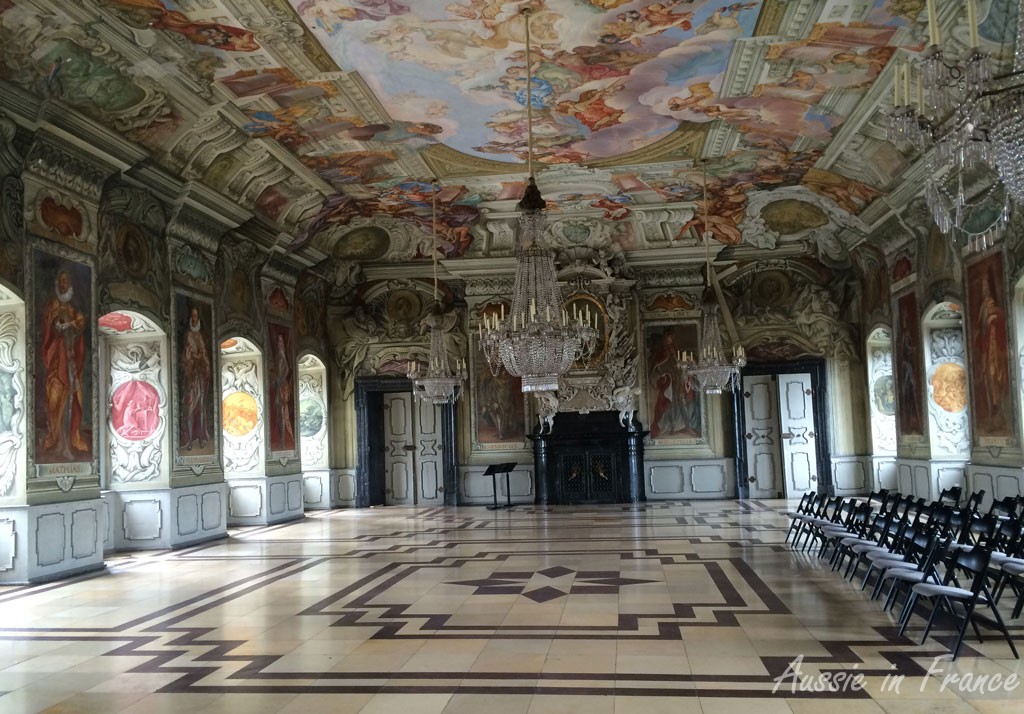 The state room in the new residence

Back up the stairs to the cathedral square after lunch to visit the New Residence whose Baroque wings were built under Prince Lothar Franz von Schönborn at the end of the 17th century. Unfortunately, we have to follow a guided tour in German and it is not until the second half that our tour guide realises that we need the brief guides in French! 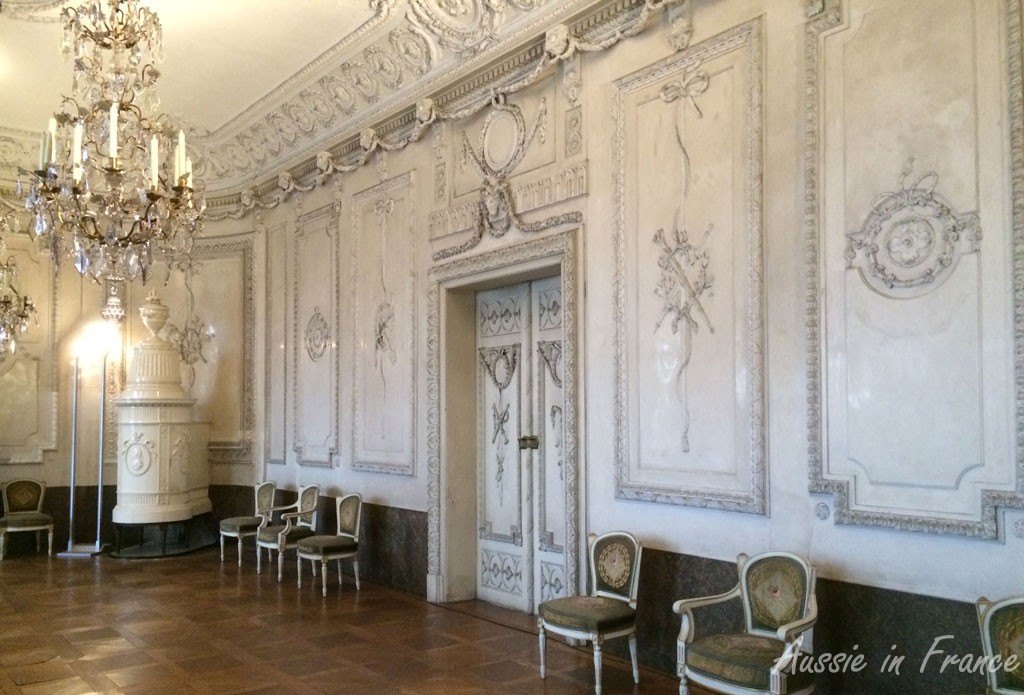 We are able to admire the beautiful painted ceilings and ceramic stoves though – there isn’t much furniture. 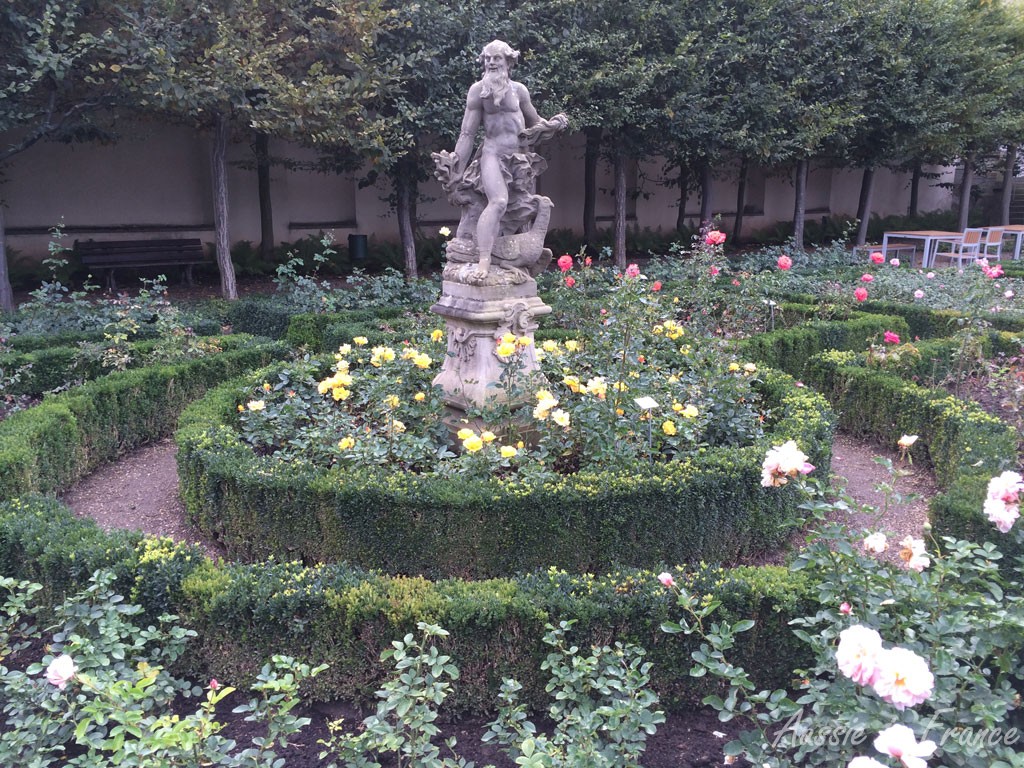 The rose garden behind the New Residence offers a wonderful view of the city but, more especially, takes us down a tree-lined path that gives us a superb view of the cathedral. with its four spires. 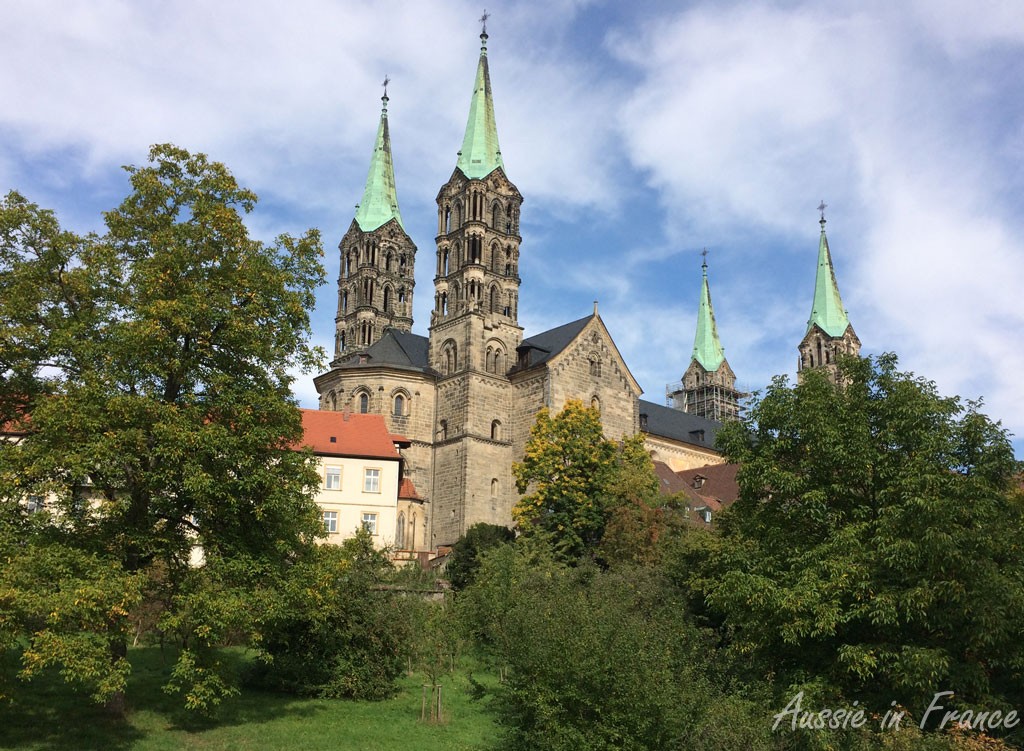 You can see the four spires on the cathedral

We follow our guidebook itinerary until  we reach the 12th century Carmelite monastery converted, like everything else it seems, to the Baroque style at the end of the 17th century. Its late Romanesque cloisters from the 13th century remain unchanged. 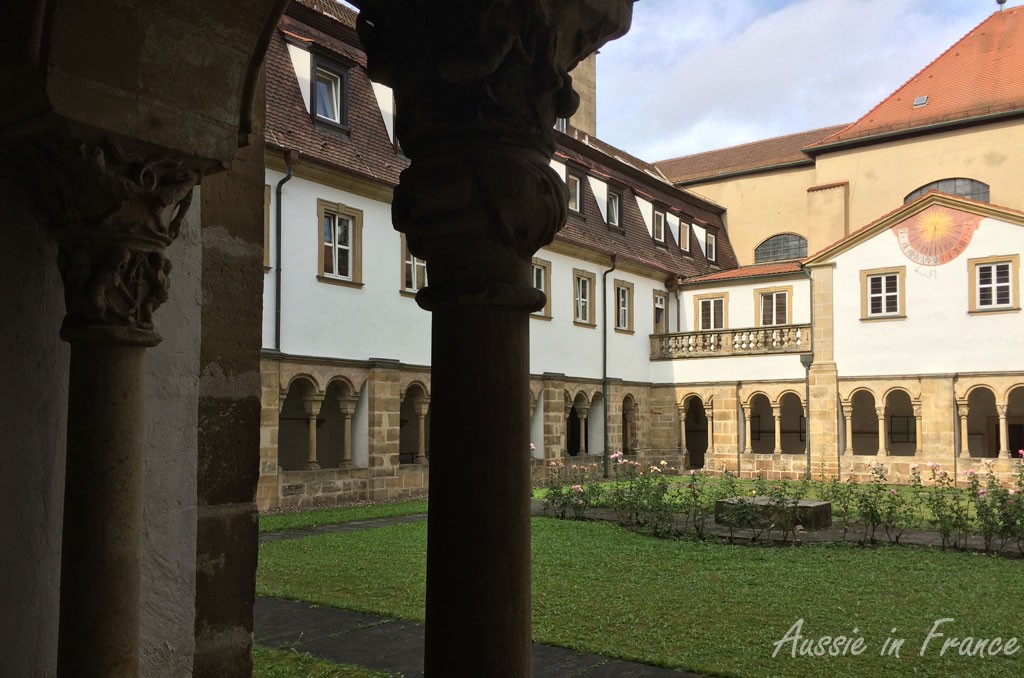 The Upper Parish church (Obere Pfarre) with its Tintoretti painting and white Baroque interior is the only purely Gothic church in Bamberg. The high chancel is supported with flying buttresses which make it very impressive from the outside. 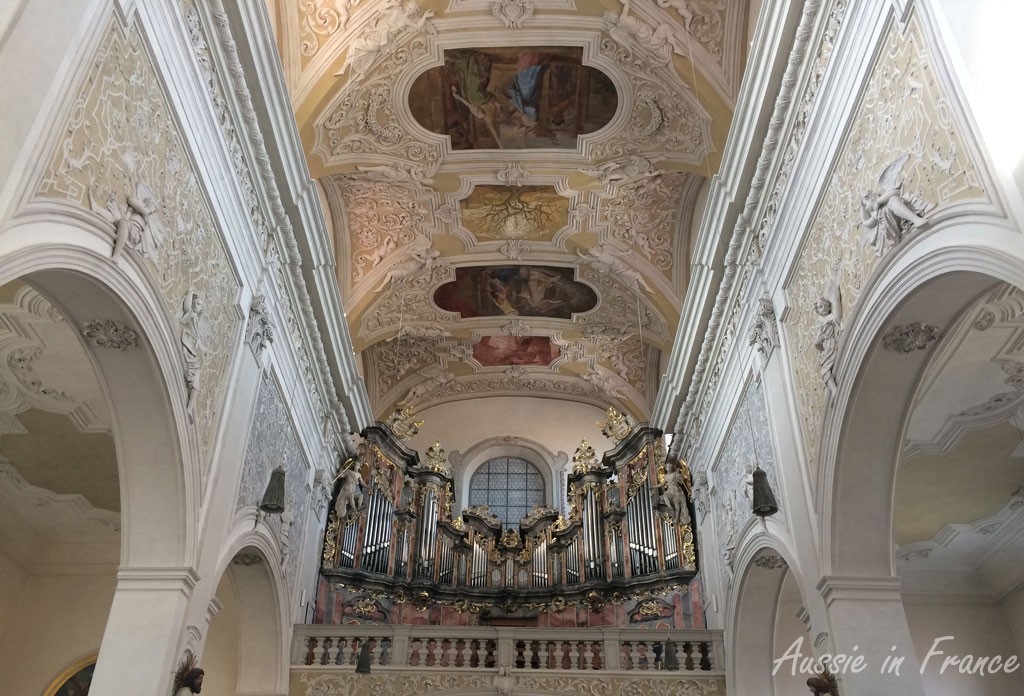 The interior of the Obere Pfarre

We debate about whether to climb another hill to see Saint Michael’s Monastery founded in 1015. The photos in the guidebook showing the painted ceiling with its 578 flowers and medicinal herbs convince us and we make a final effort. It’s closed for renovation. Sigh. 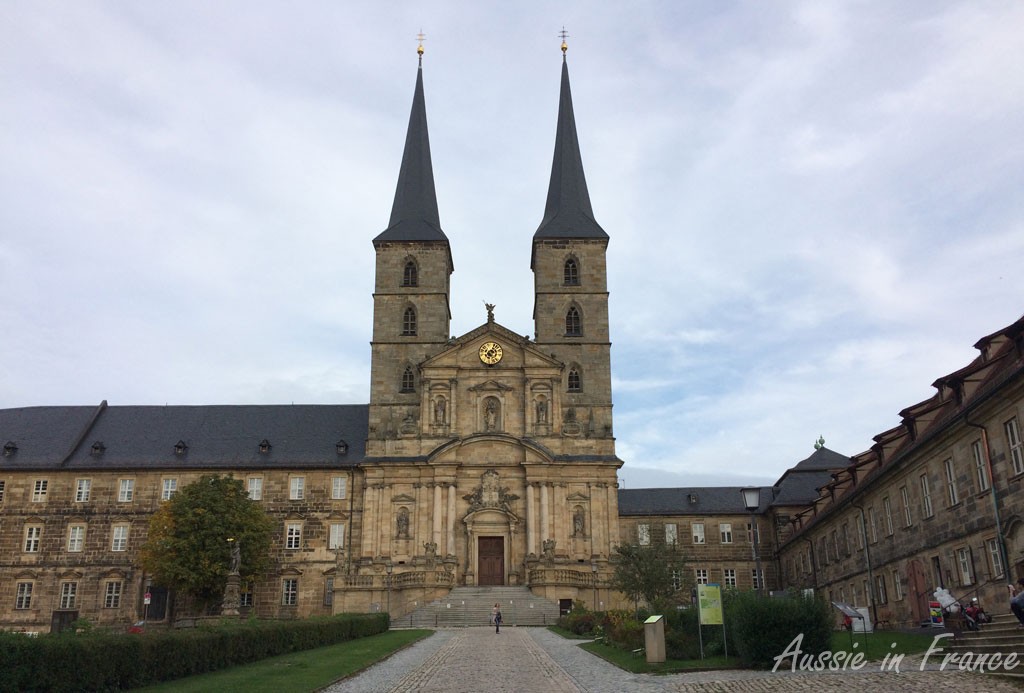 The view as we go down the hill along a small pathway to the historical centre makes up for the disappointment. 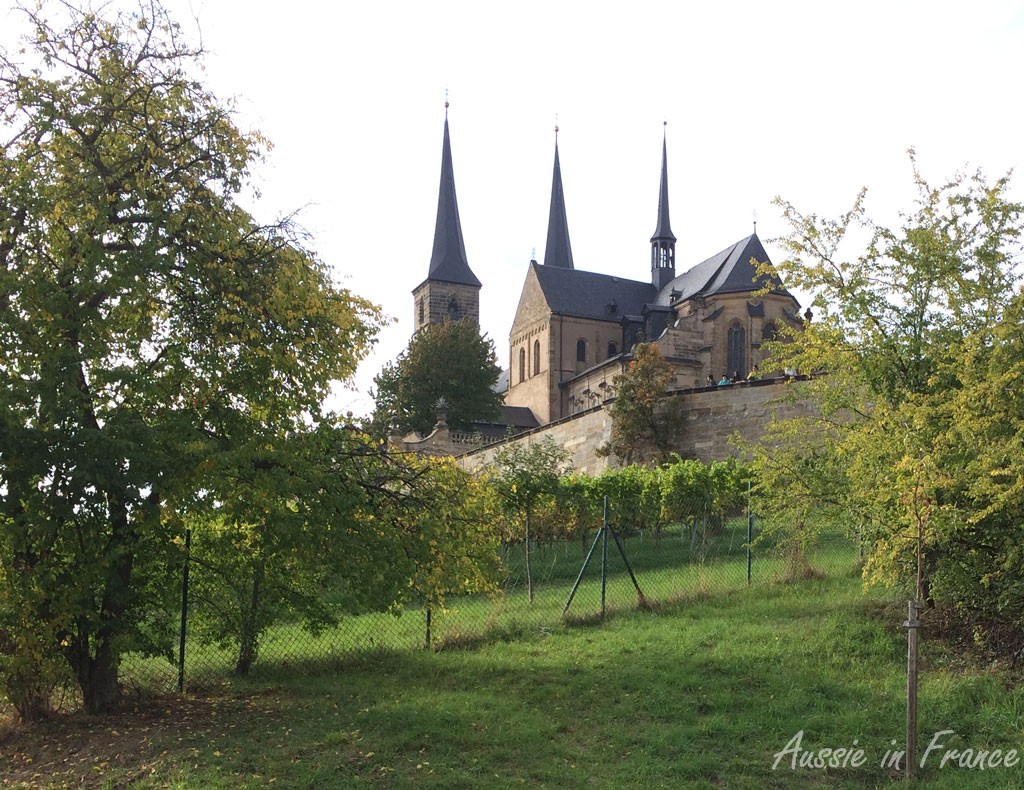 An ice-cream in front of the Altes Rathaus gives us enough stamina to call in at Kathe Wohlfahrt Christmas decoration store where we buy a little set of bells for the Christmas tree. We usually buy something for the tree in each new country we visit but we totally forgot to do so when we were in Serbia and Romania.What a pity! 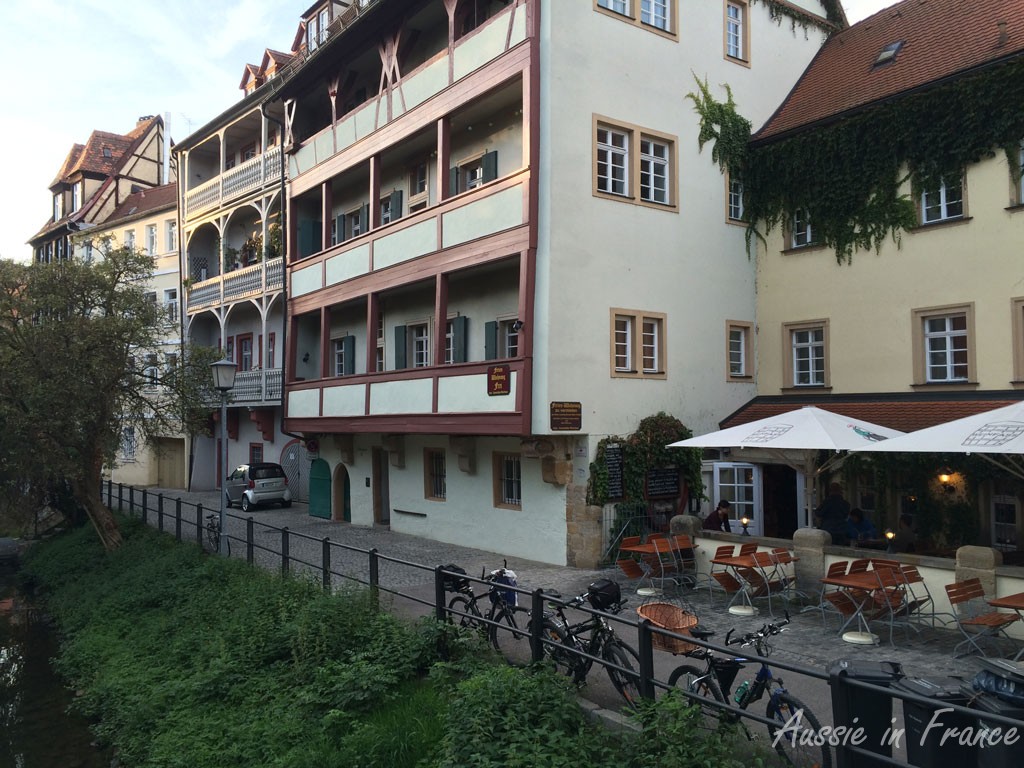 An inviting cafe along the canal in Bamberg

Back at our apartment, after having walked 15 kilometers (according to the health app on my iPhone), we check the weather and the map for a last one-night stopover on the way hope. We decide on Colmar, another Little Venice with its pretty canals and Alsatian decor. Maybe we’ll be lucky enough to find some vin nouveau and harvest bread like we did last time !

This entry was posted in Accommodation, Architecture, Art, Germany, Mushrooms, Sightseeing and tagged bamberg, what to see in bamberg. Bookmark the permalink.

7 Responses to  Bamberg – A World Heritage Site in Germany