Cycling in Hungary – An experience

Posted on October 1, 2015 by Rosemary Kneipp

It’s finally going to be warm enough to cycle – 16°C at 1 pm going up to 19°C at 3 pm. Jean Michel has checked all our Eurovelo 6 maps, plus the local map from the Tourinform office. We can cycle from Baja to Dunafalva, and back, he tells me, a round trip of about 40 K.  There are two villages along the way. I can already see myself cycling leisurely along the Danube and having a rest stop in a café or two along the way. with a view of the river traffic. 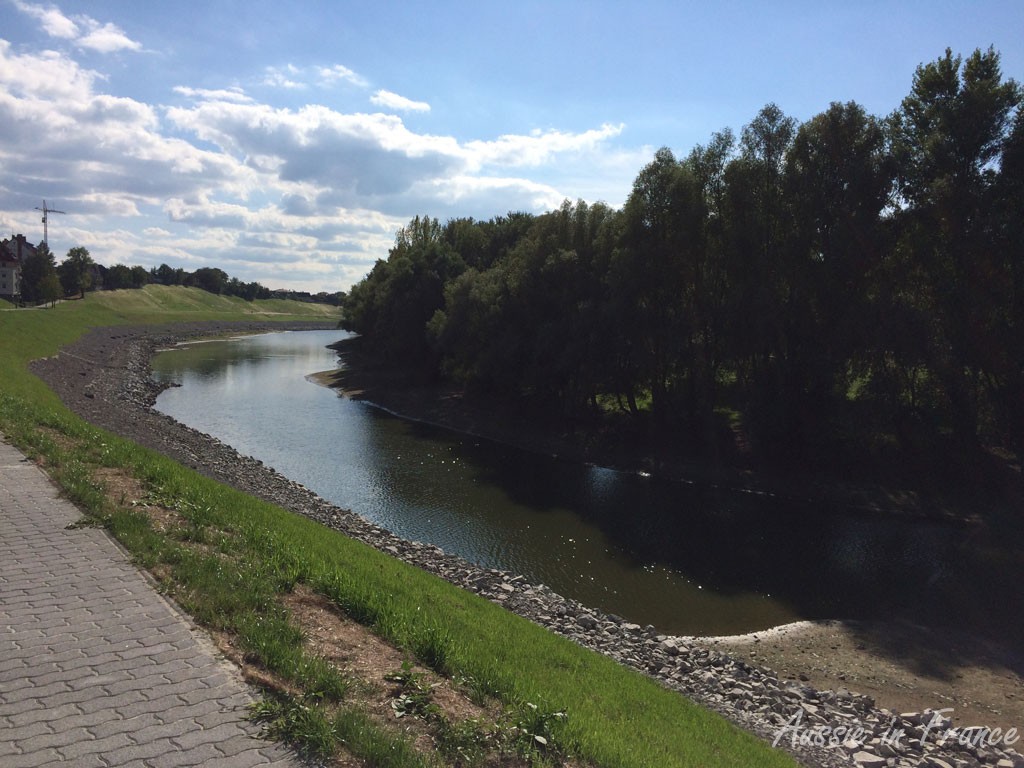 The Danube in Baja

We set off from our hotel at 2 pm naively imagining that the itinerary will follow the river, but we can’t find the Eurovelo 6 signs. After a few wrong turns, we’re finally on the right road – an ordinary sealed road leading out of town that proves to be dead boring for about 8 K. We could be anywhere in the world – a levee with maize on one side and trees on the other, totally obscuring the Danube from sight and one flock of sheep. 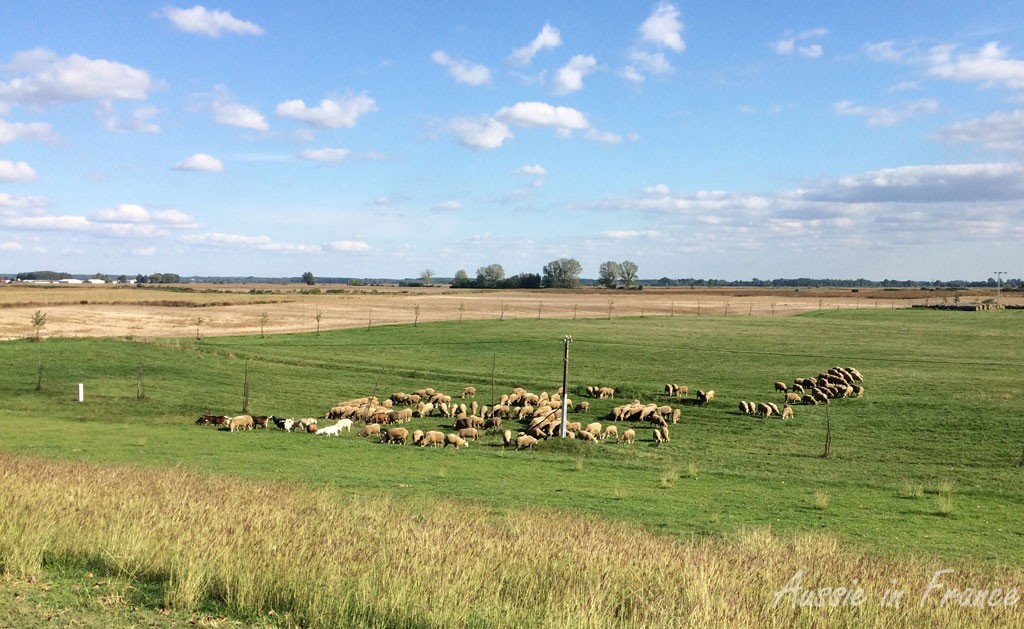 A flock of sheep alongside the levee

Szeremle creates a small diversion with two churches and a stork’s nest on top of one of them. 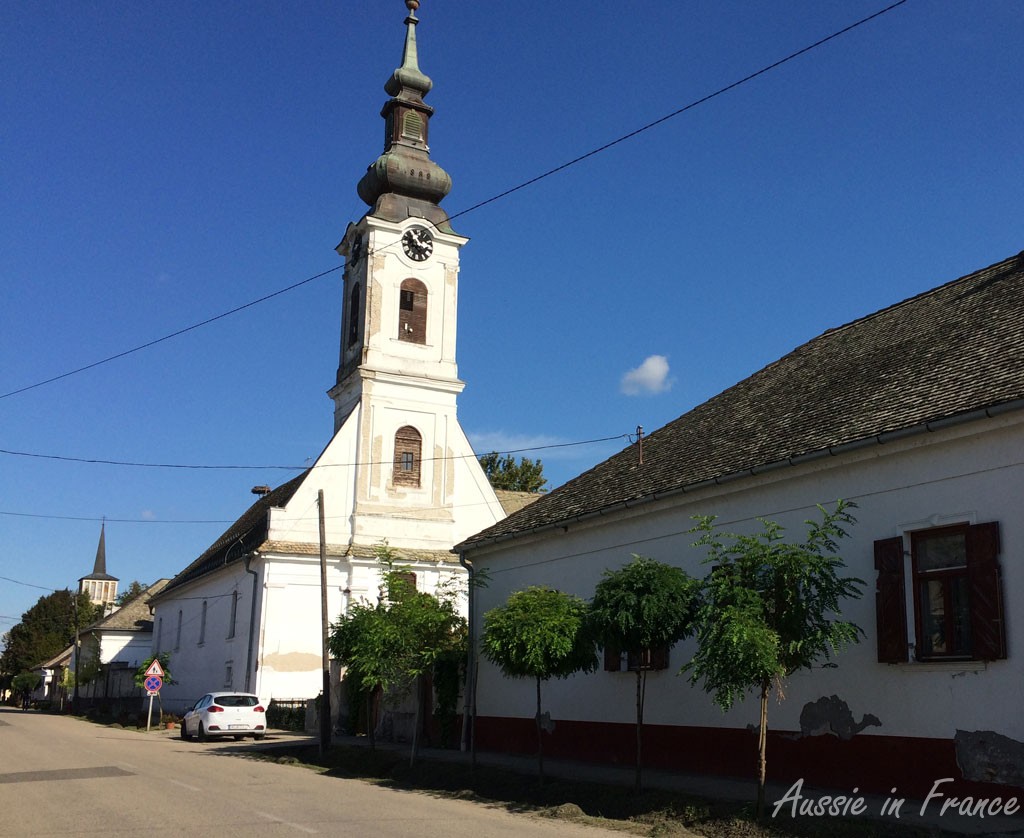 The levee road turns into gravel with quite a lot of pot holes but improves a little bit after about 5 K before becoming an easy sealed road that we share with cars. There is no real improvement in the scenary except for a couple of glimpses of the Danube. 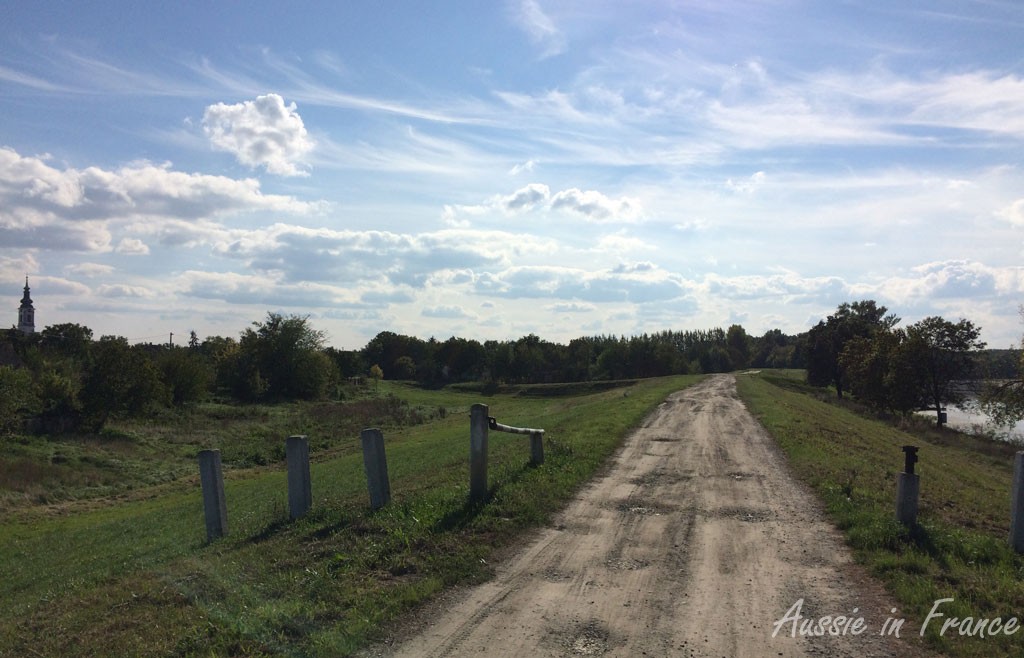 The levee road with its potholes

We reach at sign saying Dunafalva/Danaudorf to the left but continue to the ferry that crosses the Danube to the village of Dunaszekcso opposite. However, time is getting on and the path on the other side of the river that will take us back to Baja is entirely along a forest and in the shade. 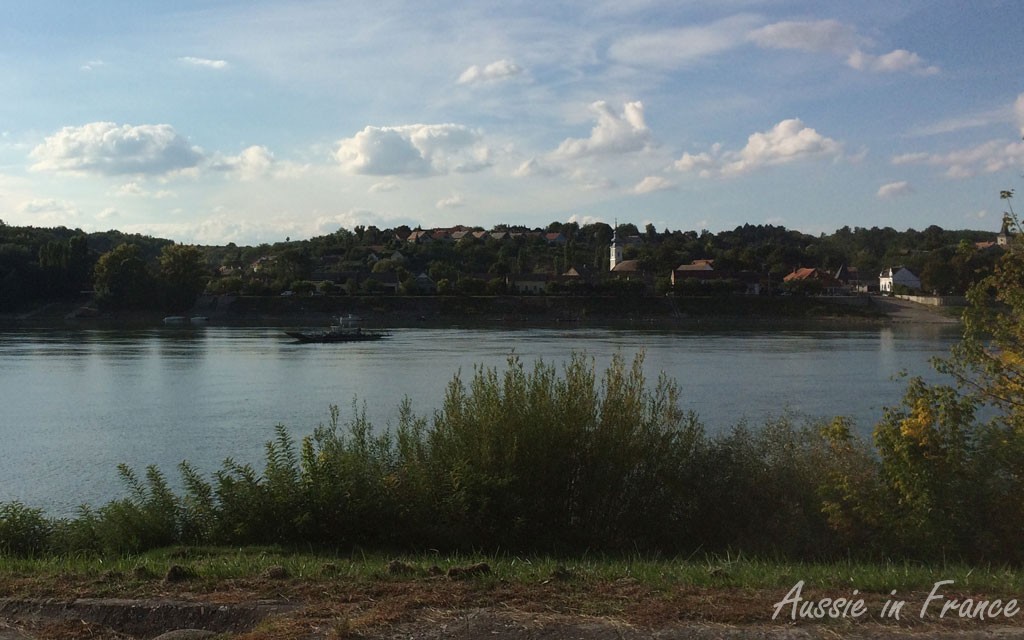 The ferry is close to the opposite bank, in the middle of the photo

We try to find the centre of Dunafalva but we can’t even locate a church. It looks very rural. We have to navigate around chickens and kittens on the road. The pigs are behind a fence though. We see paprika drying on the farmhouse walls. 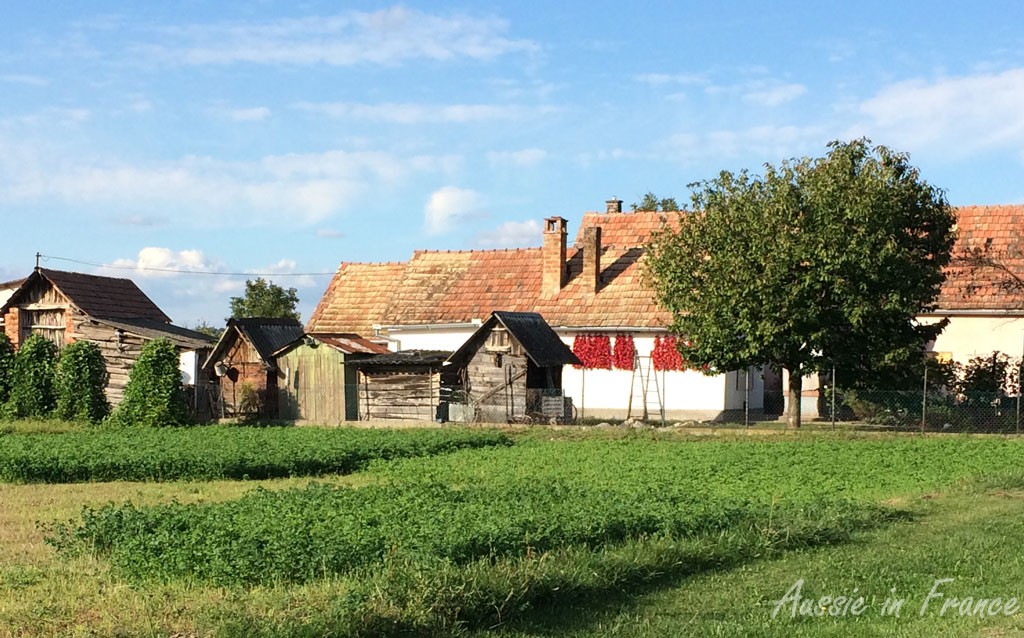 Paprika drying on the farmhouse wall 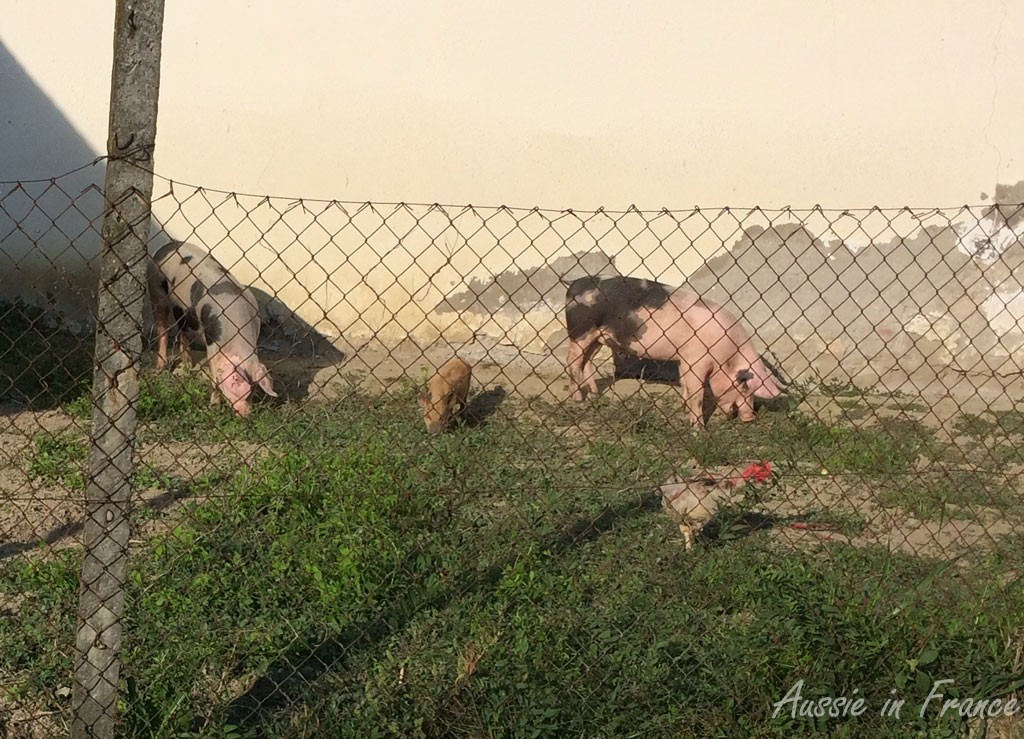 Some little porkies along the way

We eventually come to a café. called the Red Moon. I’m very excited because there is a sign on the wall saying Coca Cola, Coca Light and Coca Zero. About 7 or 8 are sitting in a sort of beer garden next to it and all have glasses in front of them. They look as though they’ve been there for a while. They greet us with bemused stares. Jean Michel goes inside the café and comes out with the news that they only have ordinary coke which is no good on an intermittent fast day. 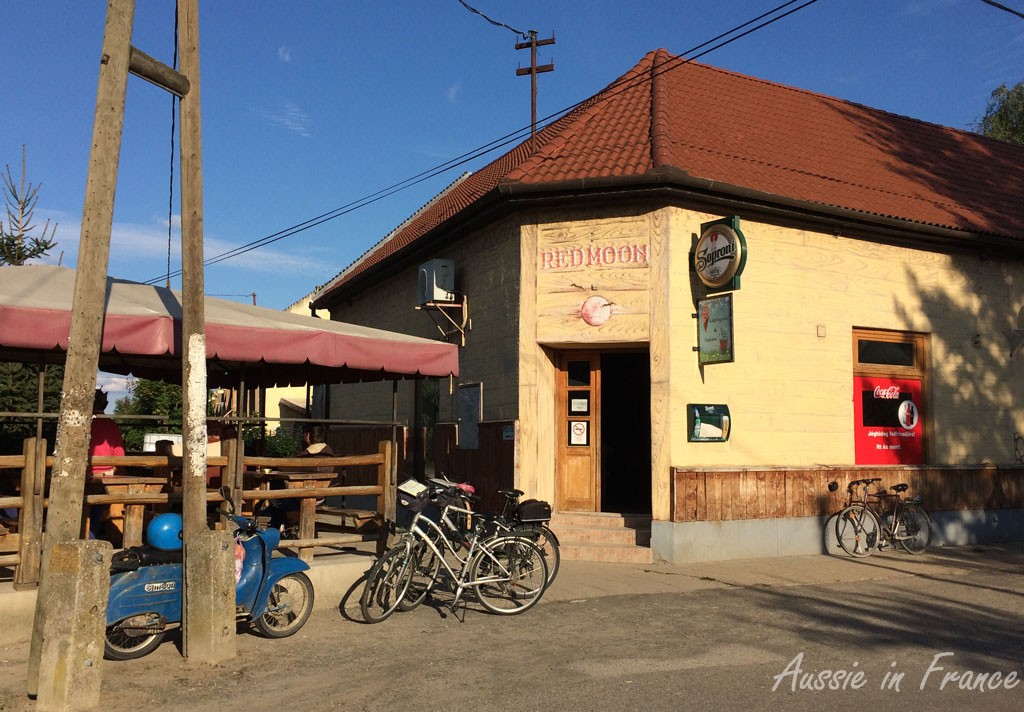 The Blue Moon in Dunafalzva

There is one other café further on, opposite a  new concrete church without a steeple. No one understands what we want. 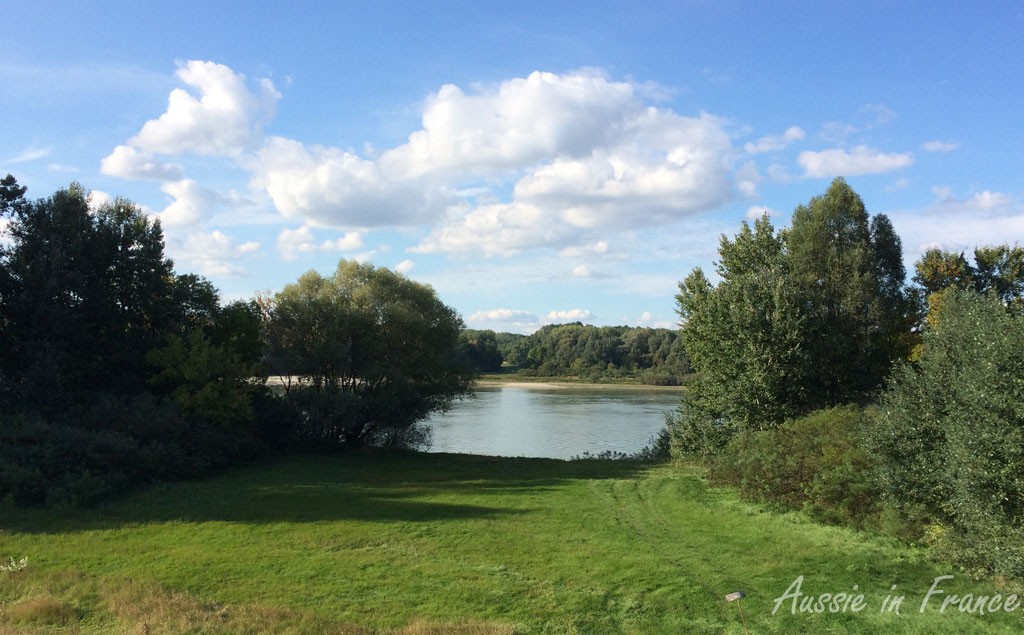 An occasional glimpse of the Danube

We’ve now clocked up 27 K and decide to cycle the 22 K back without stopping so that we’ll make it to the hotel before dark. We take a rest at a picnic table in a park opposite an outdoor way of the cross and get on our bikes again. As we’re riding along the levee a dog starts running along beside me. It suddenly speeds up and crosses the path in front of my bike. I brake quickly and hear the dog squeal. Fortunately no one is hurt! We then take a very bad road instead of the gravel levee road and immediately regret our choice. 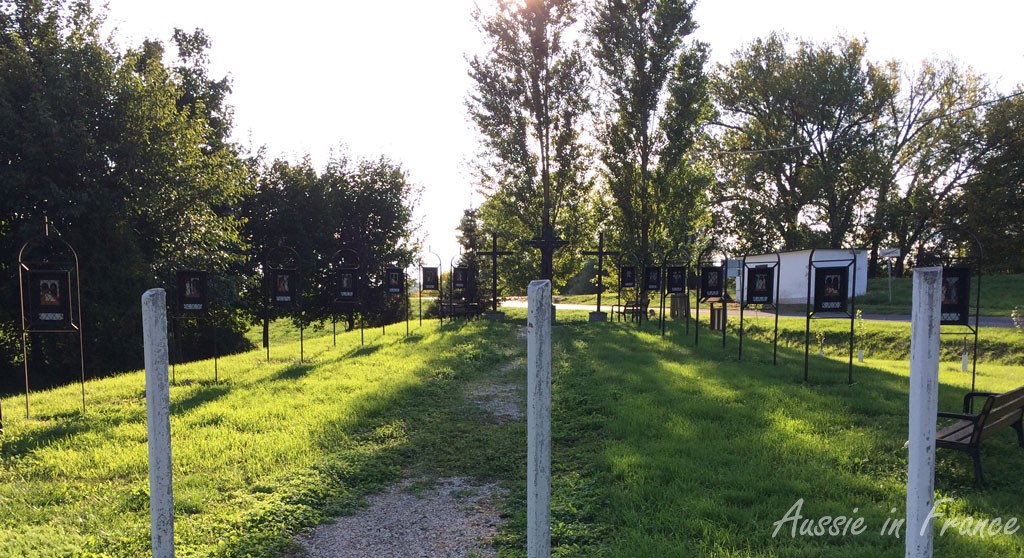 The outdoor way of the cross in Dunafalva

It’s getting cooler so I add socks to my sandals and we both put our windcheaters on. It’s a long, boring ride back with the exception of a horse and cart in Szeremle. I’m still hoping for a Coca Zero but the only possibility doesn’t have a terrace which means it will be full of smoke. Smoking is still allowed in bars and cafés in Hungary. 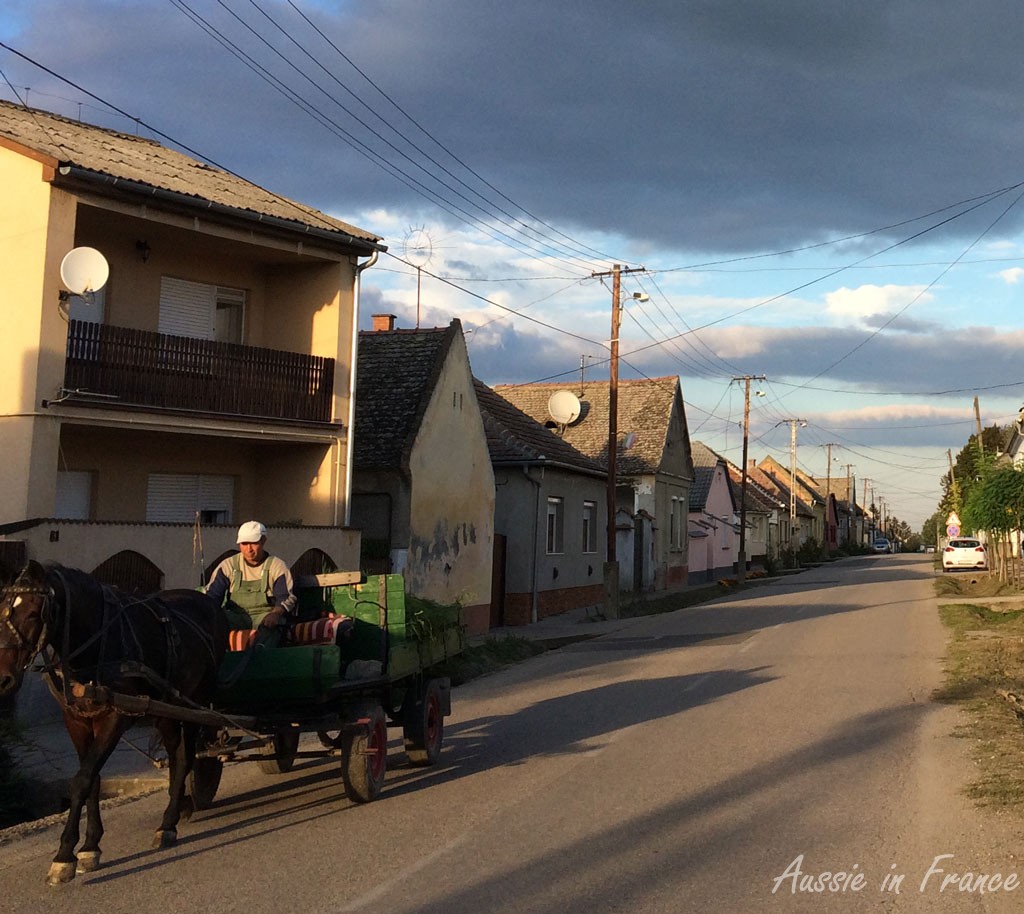 A horse and cart in the main road of Szemble

Tomorrow we are going to Austria and hope to find more attractive scenery along the Danube. I’m trying not to keep my hopes too high with regard to riverside gasthofs and gasthauses because we know it’s off season. Perhaps that way we won’t be disappointed. The last time we cycled on the Danube in Austria was along the S-bend in the beautiful Wassau region. which was absolutely stunning.

This entry was posted in Cycling, Hungary and tagged cycling in hungary, eurovelo 6 in hungary. Bookmark the permalink.

One Response to Cycling in Hungary – An experience