A Peaceful Walk in Les Grouets

We are still reeling from the news of the terrible terrorist attacks in Paris on the evening of Friday 13th November. Our vegetable vendor  at the market on Saturday receives a call from her son at 11 am while she is serving us. He lives with other students in the area where the killings took place but she hasn’t been able to get onto him. You can imagine her relief when she learns he is safe and sound. We have been listening to the news on the radio and reading details on the iPad. We don’t have a television set and I am careful not to watch any videos. By Sunday afternoon, we need to commune with nature. Fortunately it’s reasonably warm and sunny. 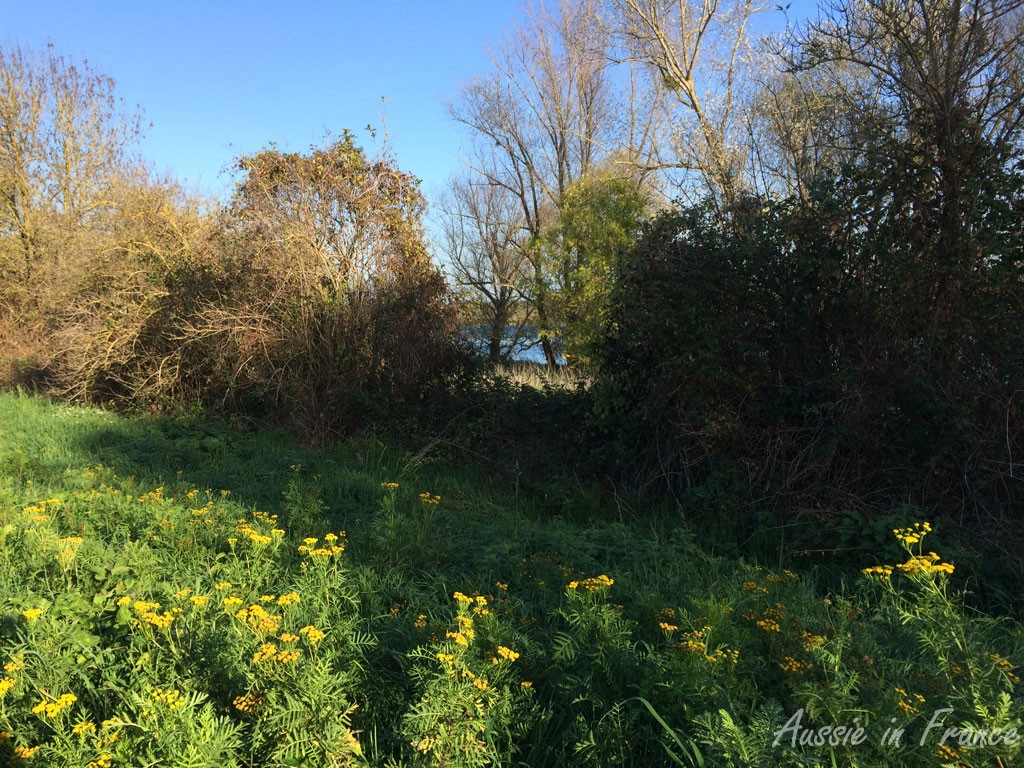 Start of the track along the Loire

We walk down our street, Rue Basse des Grouëts, towards Blois until we get to Rue des Blanchets with its little hothouse. We cross the busy highway and go down the path towards the Loire. We’ve already explored to the right on an earlier occasion, so this time we turn left. We are pleasantly surprised by how lovely the path is. 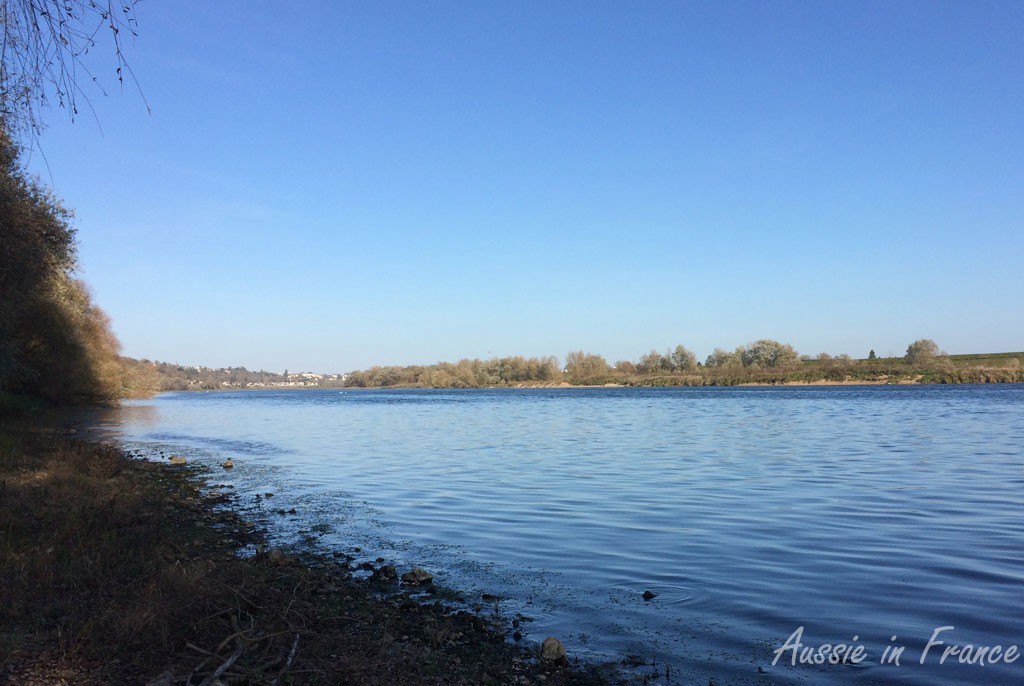 Down to the left, we can just make out the city of Blois.

We eventually come to a house on the left that we have only seen from the main road. We would never have imagined what it’s like from the other side. Lots of large windows have been added to make the most of the view. 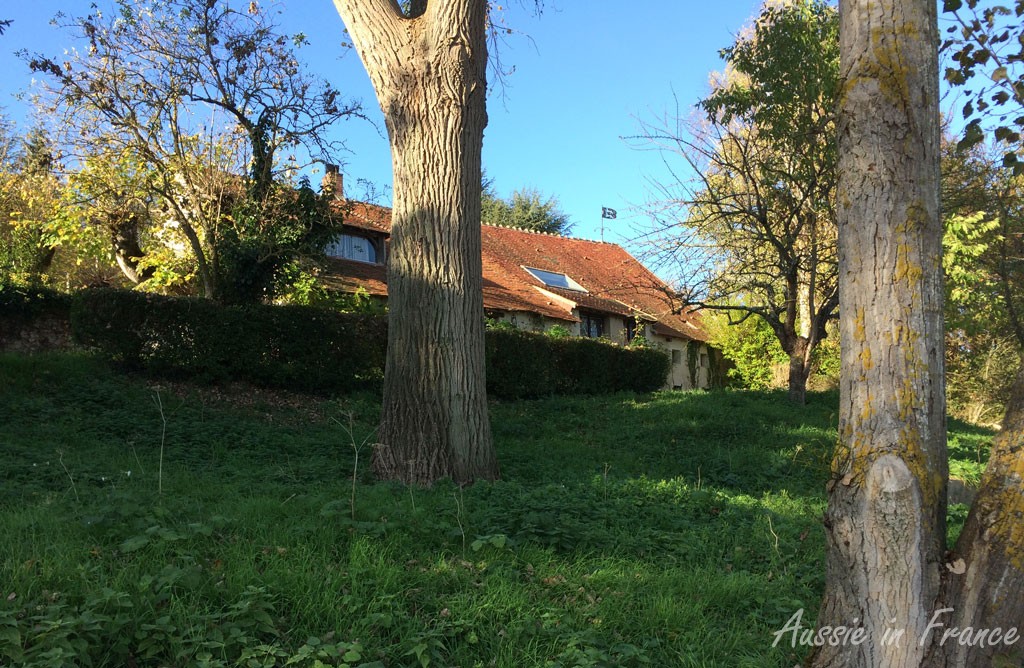 Further along the path we see another house that we have also only seen from the road. We’re surprised at the intricate sculpting on the gable. 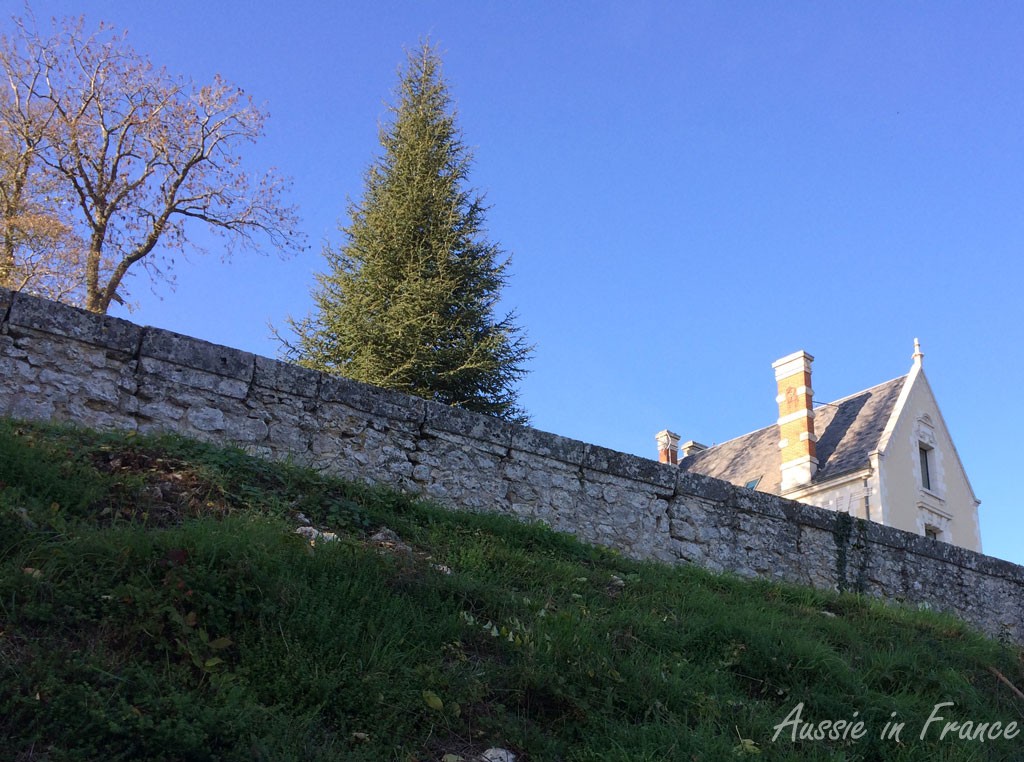 Next, to our great surprise, we come across a bridge near to a culvert. The path is quite steep on the other side. We certainly couldn’t have cycled here! 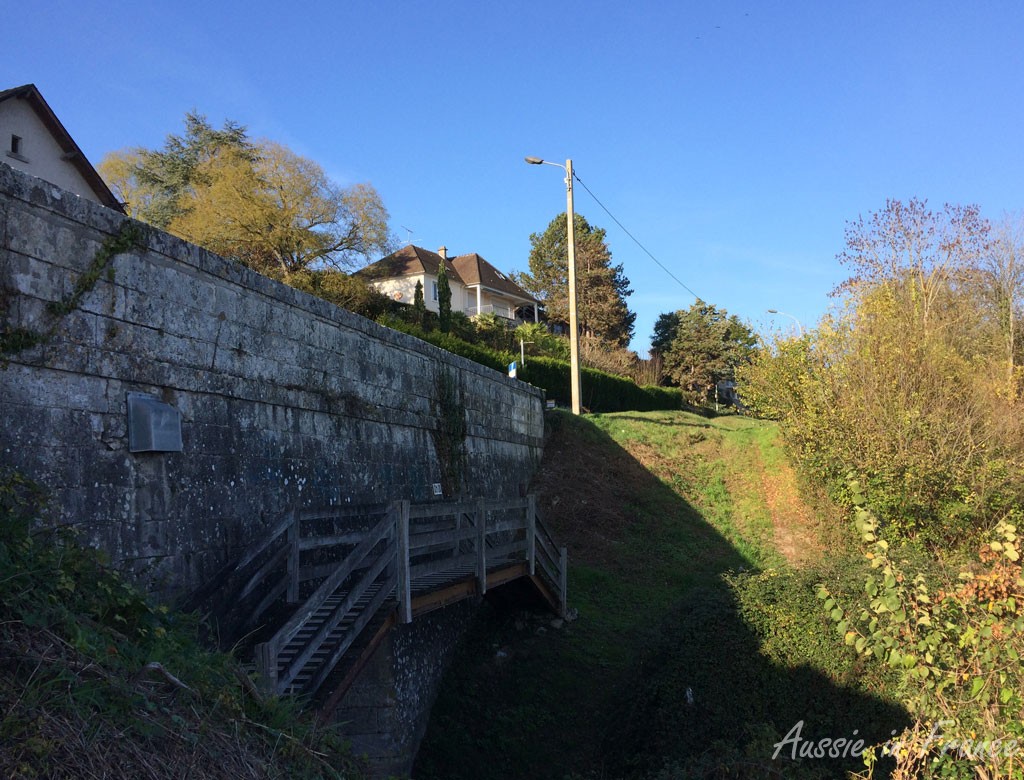 The wooden bridge next to the culvert

Jean Michel tells me we’ve come to the end of the track, but we haven’t. It veers off again to the right so we keep following until we come to a little bench among the trees. 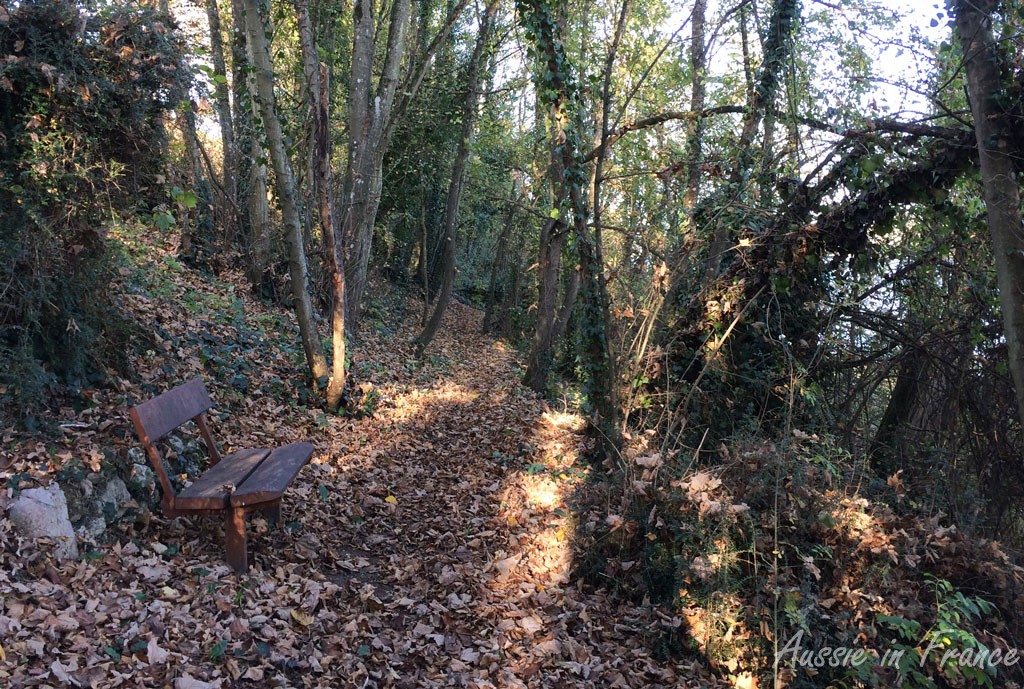 A bench to rest on and watch the river!

We come out of the little wood and can see swans on the river. We’re impressed this year at just how many there are. 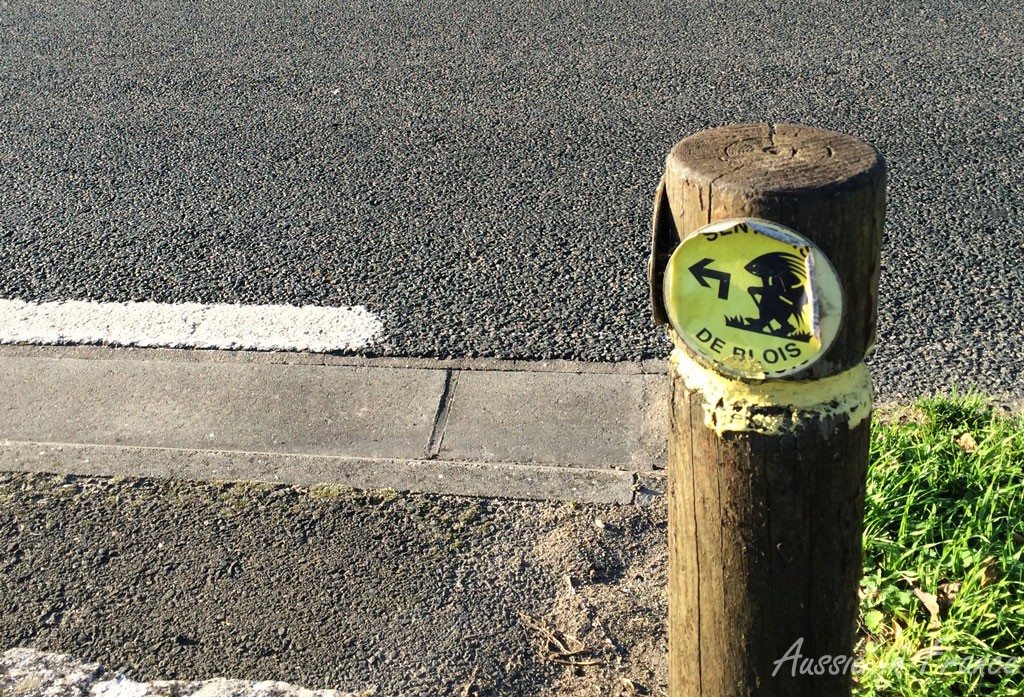 The Blois walking sign indicating we are to cross the main road.

By now we’ve walked for about an hour and a quarter so we’ll need to start on our way back if we want to get home by dark. The walking path takes us across the main road again and onto Chemin du Petit Pont (little bridge path). 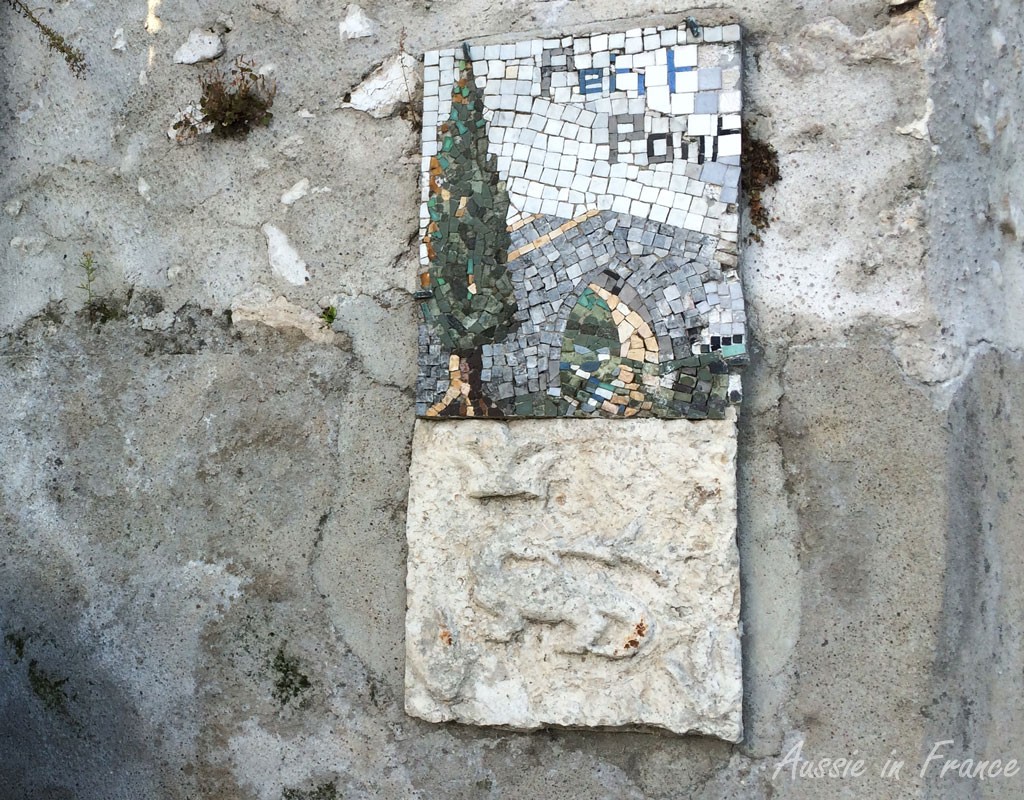 The sign at the start of Chemin du Petit Pont

The house on the corner has a very interesting mosaic with the “little bridge” at the top and François I’s salamander and crown at the bottom. 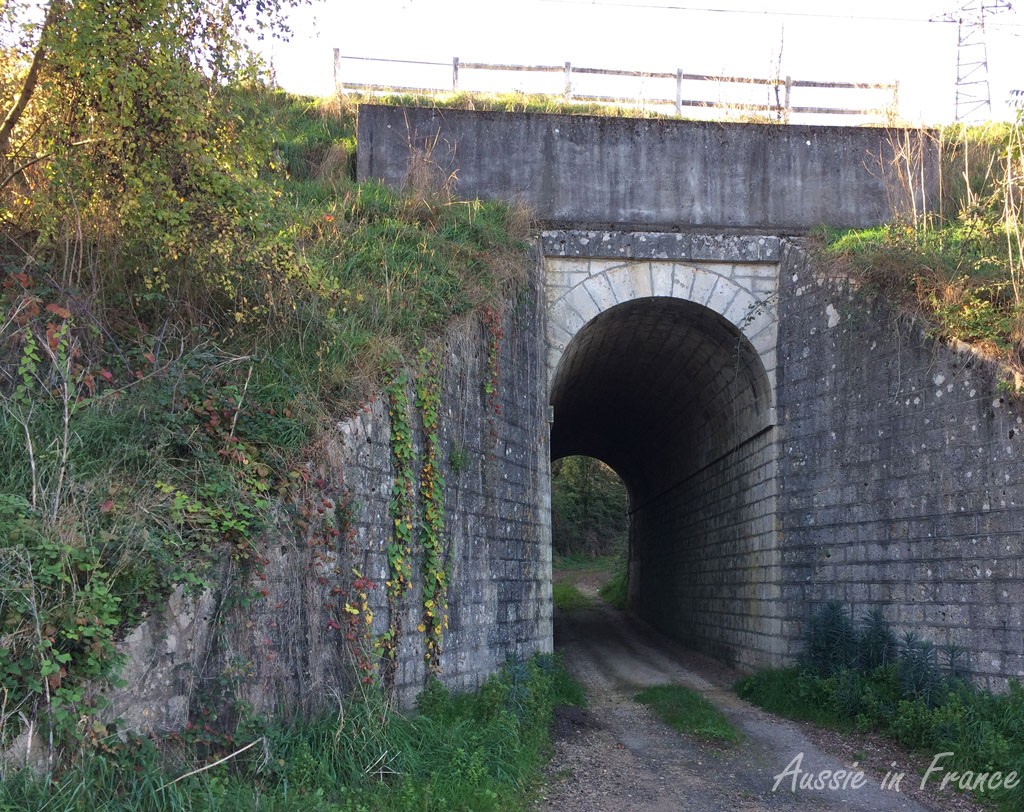 We walk through the tunnel under the railway line and come out on a grassy area. 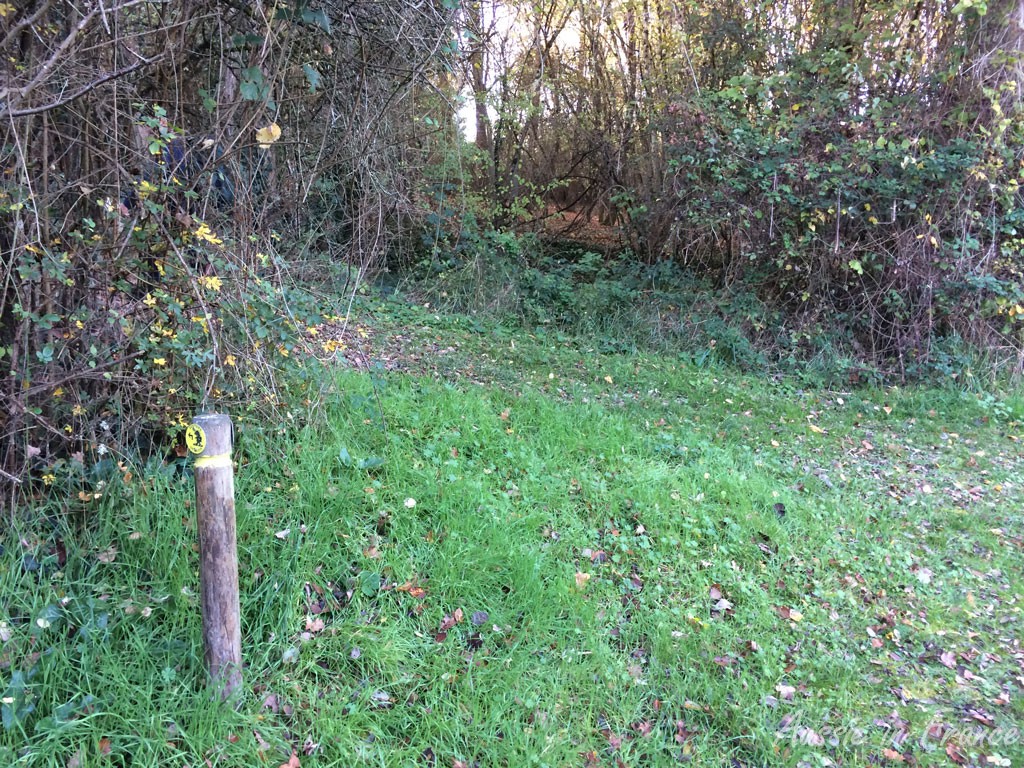 Fortunately, there is a sign telling us to take a sharp turn left onto a path leading to Chemin du Saut aux Moines (monks’ leap path?) which we would never have found otherwise. 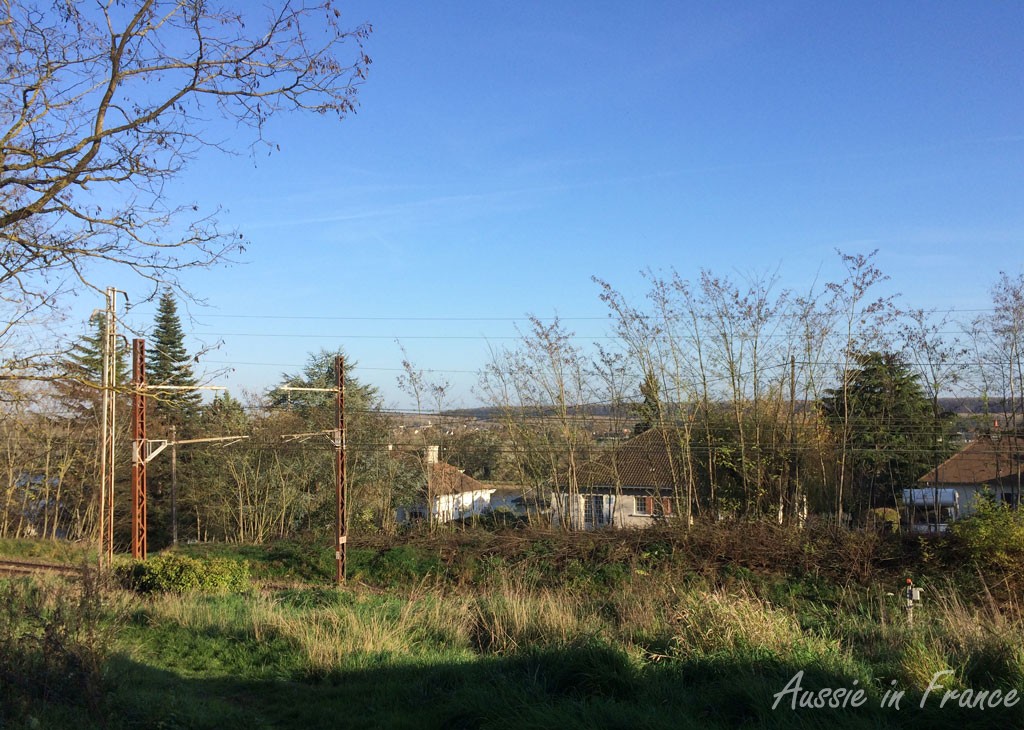 View from the railway line

We climb the path thtat takes us up to the Paris to Tours railway line that runs behind our house. The path moves away from the tracks until we turn left on Chemin de Pomone. 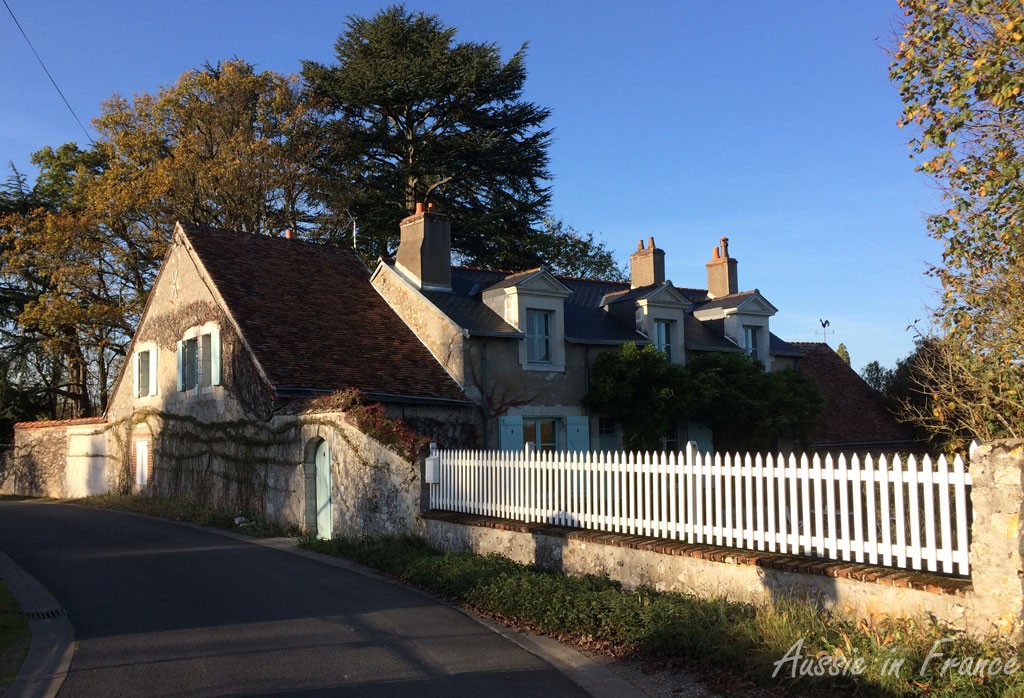 At the end of Chemin de Pomone we turn left into Rue des Moriers. 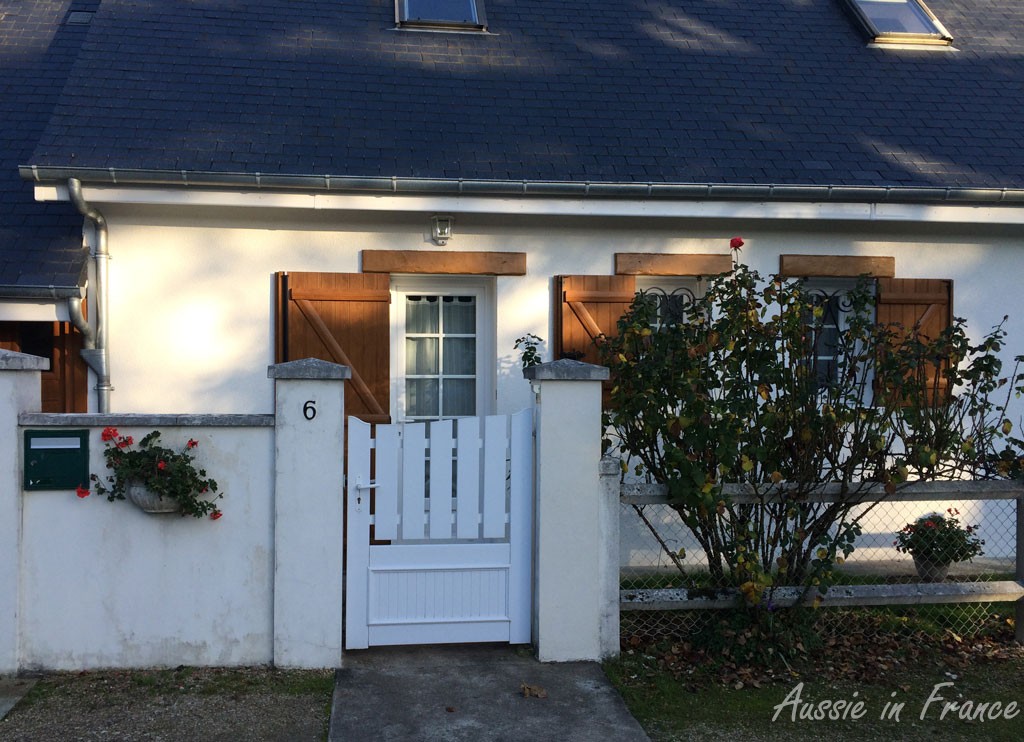 We take the next right into Rue des Poutils, which has an orchard on one side and a very large house in the distance. 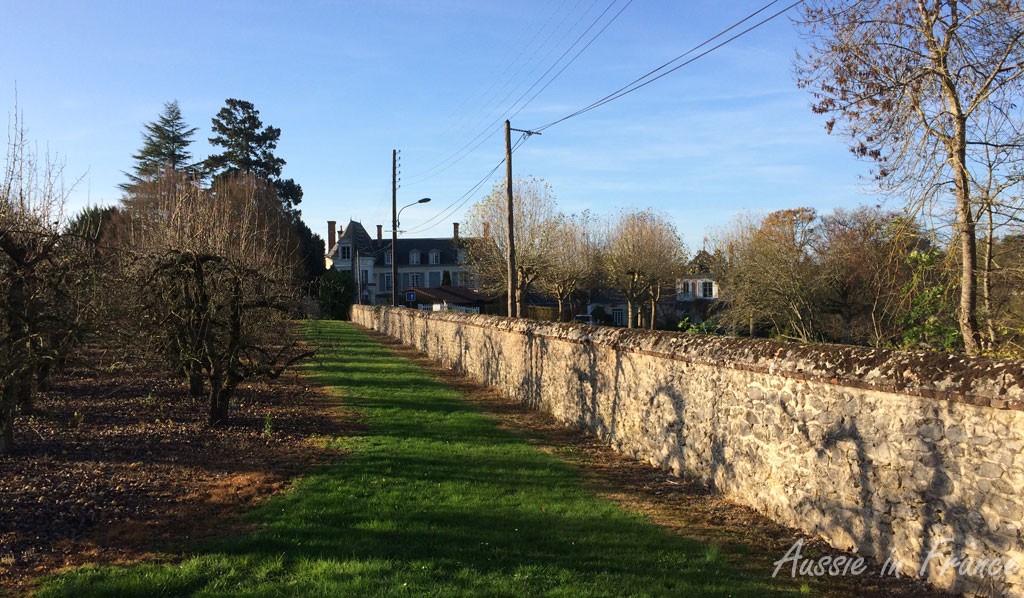 An orchard and large house on the corner of Rue Poutils

At the end of Rue des Poutils we turn right into Rue Galandeau where Jean Michel wants to show me the cemetary. I didn’t even know we had one in Les Grouets! 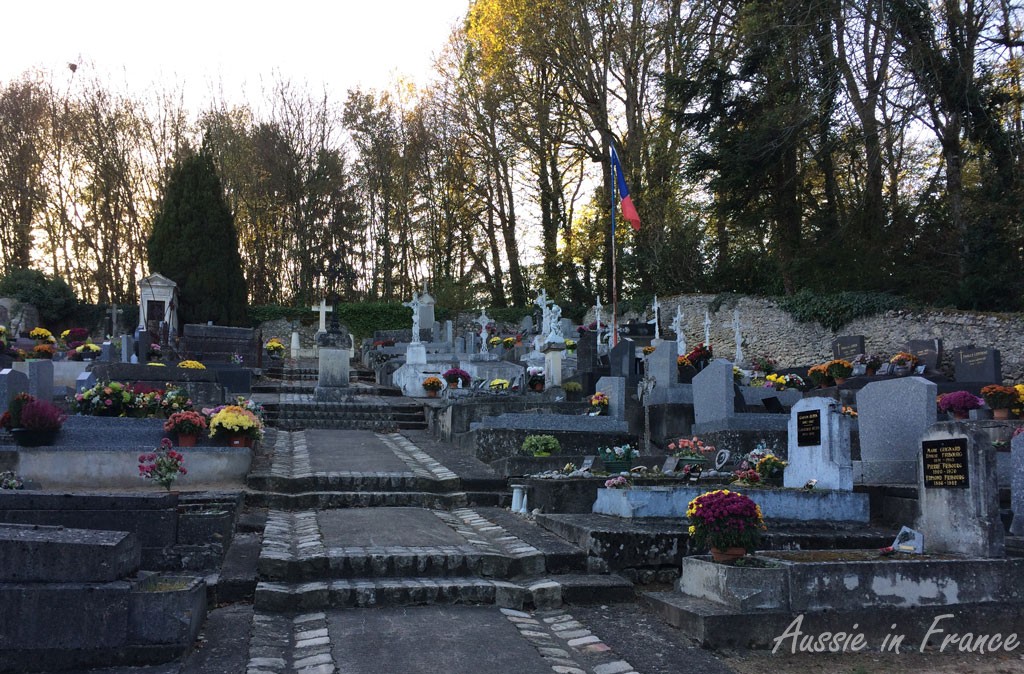 It’s very quiet and peaceful. We wander through and I recognise some local names but am surprised to see that most of the tombs are 20th and 21st century. I later learn that it’s because the time has run out on some of the plots and they haven’t been renewed. 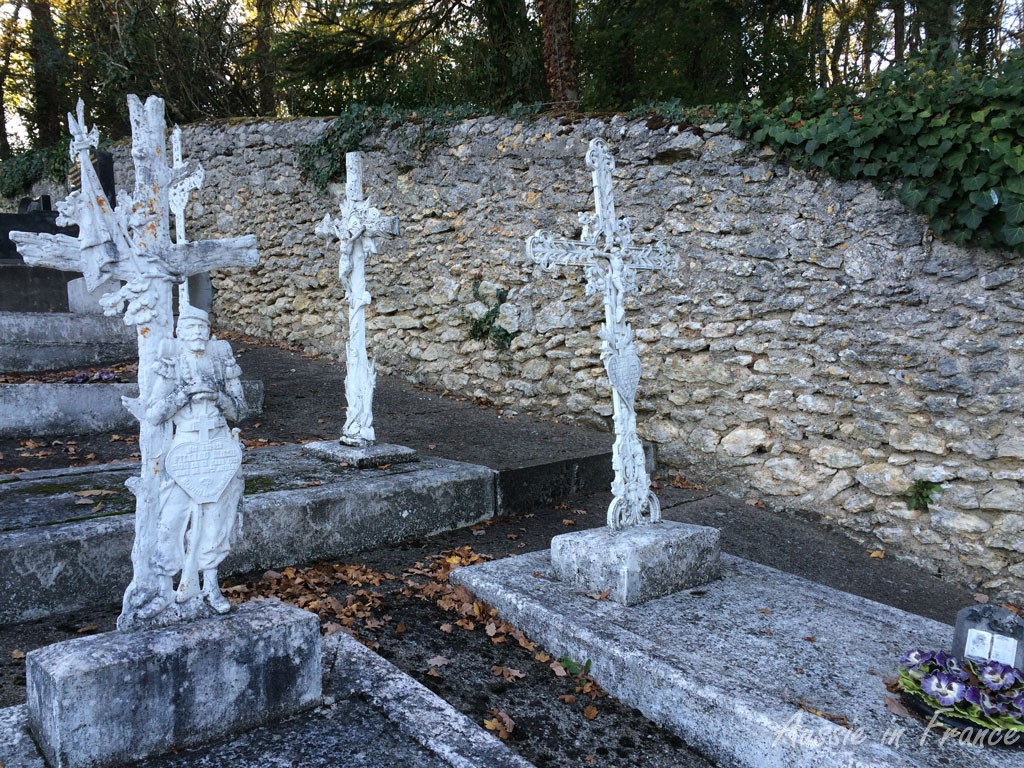 I’m particularly taken with the white metal crosses, several of which have soldiers on them. We come out of the cemetary and continue along Rue Galandeau until we reach Rue de l’Hôtel Pasquier, which is known terrain. It leads into our own street, Rue Basse des Grouëts, with the local church on the corner. 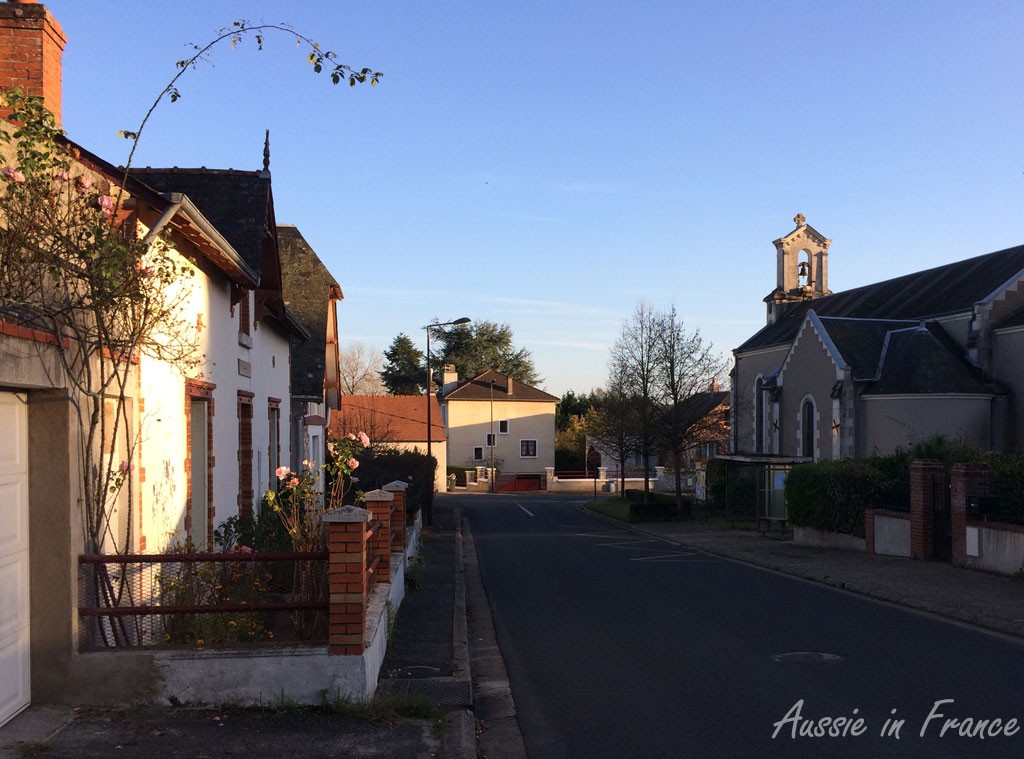 The return journey has taken us an hour, so the entire loop is 2 1/4 hours, about 7 k altogether. We get home in time for afternoon tea in front of the fire feeling much better than when we set out – but, even so, it takes me a week to write this post! 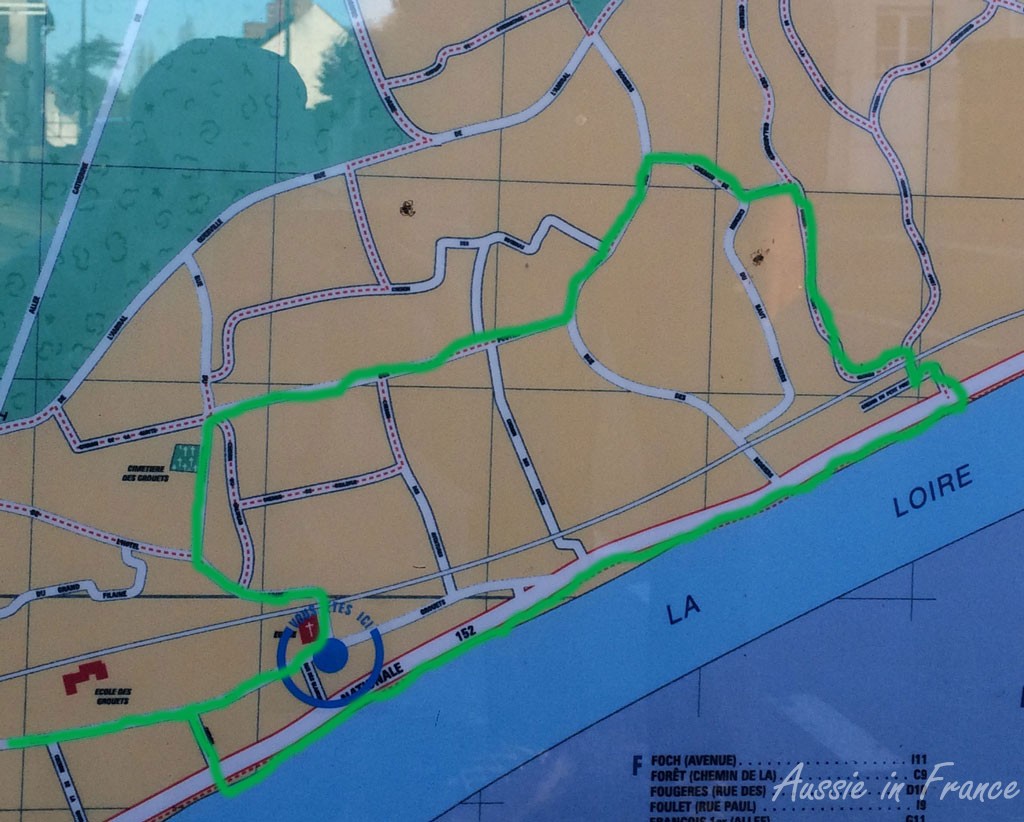 The map on the corner of Rue Basse des Grouëts and Rue de l’Hôtel Pasquier. The circle shows the church. The wriggly green line is the path we took.

8 Responses to A Peaceful Walk in Les Grouets