It’s nearly mid-January and I have only just found the time to write this new year post. Even though we have up until the end of January in France to do so, it’s still better to wish people a happy new year within the first week of the month. But lack of time is the story of my life at the present. Working full-time as a freelance technical and legal translator (I am now certified with the courts as well), looking after a large house and garden, cycling in the warmer months and hiking in the winter seem to take up  most of my time.

After a delightful Christmas with all our children – my son from Boston, my daughter from New York and Jean-Michel’s sons from Brest and  Limoges – in addition to my brother,wife and three sons, from Sydney, we welcomed in the New Year in front of a blazing fire, with warm thoughts for all our family and friends.

The cathedral in Angoulême

Travel-wise, 2017 was not quite as exciting as 2016 when we spent three months away altogether. However, we had a welcome short break and change of scenery in Angoulême at the beginning of February, followed by a most enjoyable week in Cyprus at the end of March with warm days and blue skies. We particularly liked the northern, Turkish part of the island with its wonderful painted monasteries.

We came home to spring, always the best time of the year in the Loire Valley. In April we had a fun day in a vintage car traffic jam in Blois with our friends Susan and Simon who take visitors on tours of the Loire Valley in their 1953 Citroën Traction Avant. I checked out family photos of my baptism so we could dress the part. 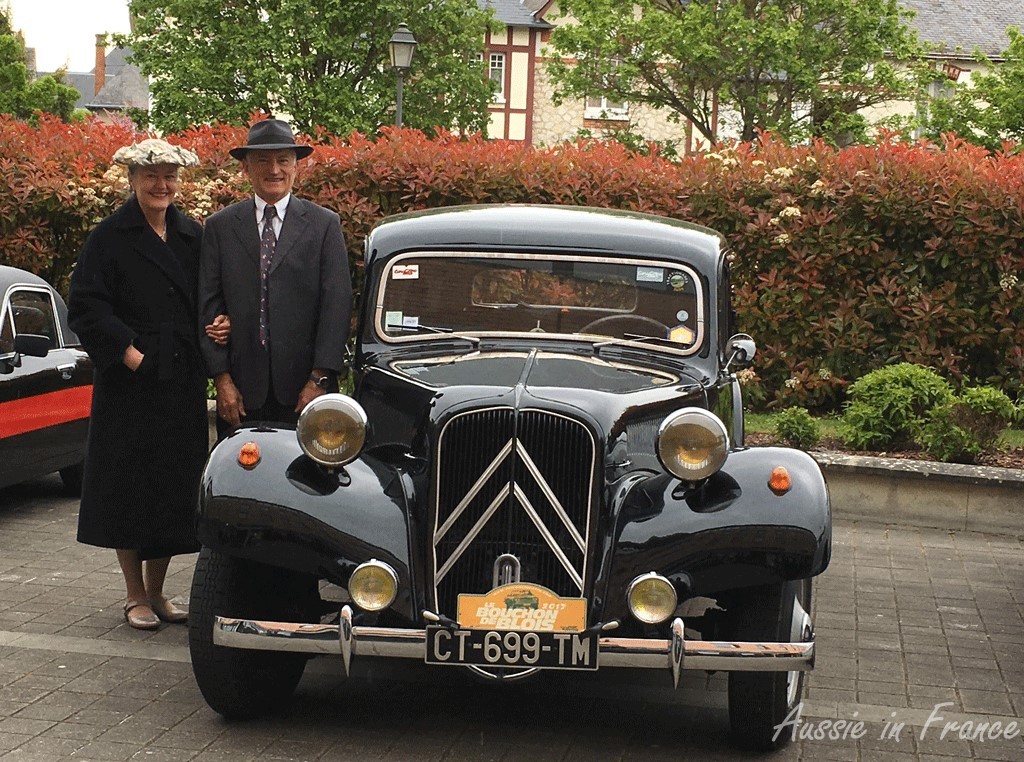 Jean Michel and I dressed for the part

The end of April took us to the Médoc (a four-hour drive south) for another long weekend where we combined cycling with wine-tasting and a breath of sea air. Living in the centre of France means that we are well-placed for this type of excursion. 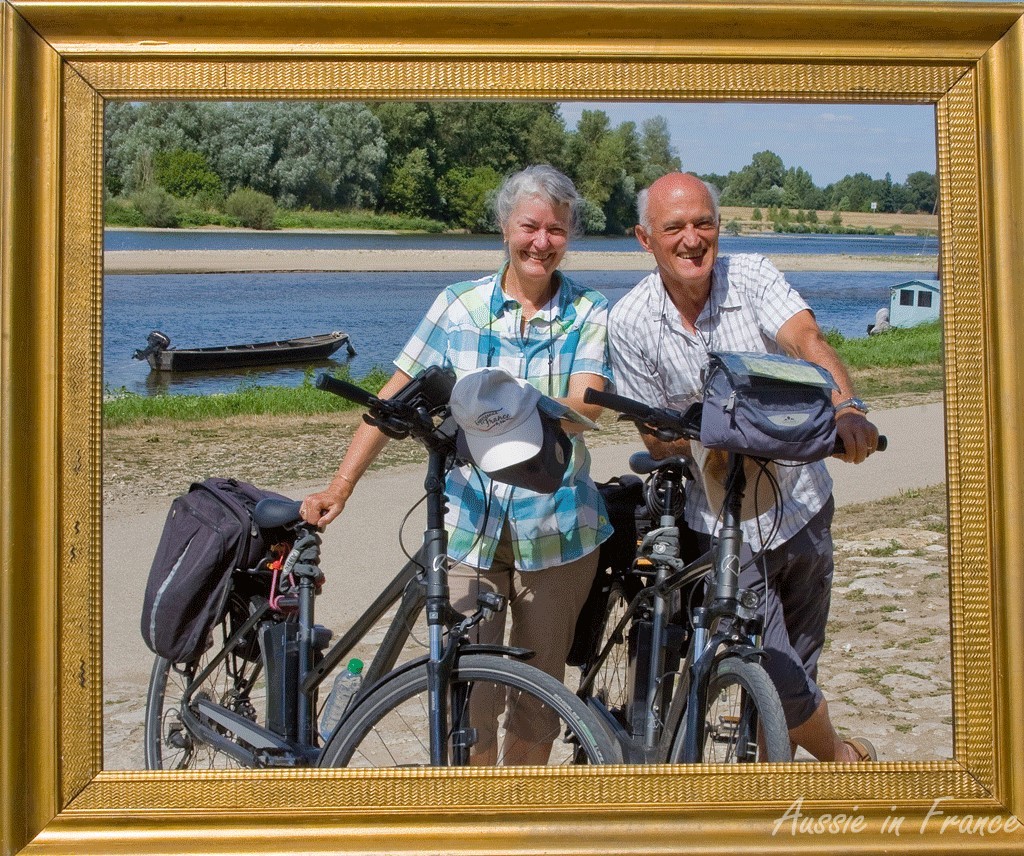 With our power bikes on the banks of the Loire

In May, we finally made the decision to invest in electrically-powered bikes for two reasons – to save our ageing knees and to free us from restrictions related to the lie of the land. Our plan was to go to Romania in June, a country we have avoided up until then due to its very hilly countryside. We were not disappointed. Jean Michel applied his usual thoroughness to choosing the right bikes for our needs and we can now go quite effortlessly up amazingly steep hills. In fact, I’m more worried going down but our disk brakes are reassuring.

Said to be the oldest grape vine in the world – in Maribor, Slovenia

So, on 1st June, we left Blois with our bikes on the back of the car for a holiday that took us to Lake Iseo in the north of Italy, Maribor in Slovenia, where we tested our ability to scale new heights on our bikes, Eger in Hungary where we nearly got washed away in a freak flood, then Sighisoara in Romania, home of Dracula and sister city to Blois, which we used as centre to visit the fortified churches of Viscri and Biertan.

Sighisoara, home of Dracula and sister city of Blois

Suceava was the next port of call from which we cycled to many very beautiful painted churches, reminding us of our visit to Northern Cyprus. In Marmures, we stayed with a Romanian family where the head of the house spoke French and we learnt a lot about this still very backward part of the country with its beautiful wooden churches and friendly people.

The wonderful town of Cesky Krumlov in Czech Republic

We then started on the road back to France, via Levoca in Hungary, then the absolutely enchanting village of Czesky Krumlov in Czech Republic where our hotel had a garden overlooking the castle, the perfect place for a picnic in the evening twilight after a hard day’s riding. We then stayed in Slavonice before crossing into Germany and discovering Burghausen with its marvellous hillside castle. It was good to be back in a country where I could at least read the signs!

Sigmaringen on the Danube in Germany, near its source

To end our journey, we decided to return to our beloved Danube using the little village of Herbertingen as our base. Taking the train and cycling, we went as far as the source of the Danube at Donaueschingen. 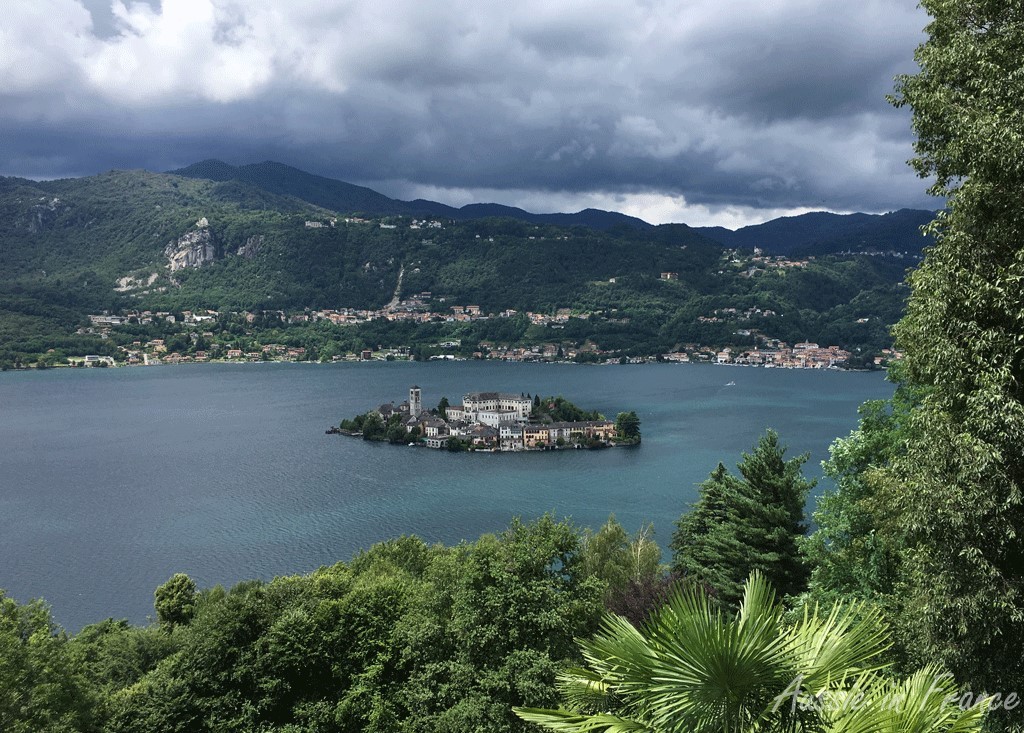 View of Lake Iseo from the top of the hill

By the 28th June the weather was starting to deteriorate so we changed our initial plan to spend a couple of days in the Black Forest and went to Orta San Giulio in Italy instead where rain and shine alternated enough to let us ride around Lake Orta and up to the sanctuary of Madonna del Sasso, at an altitude of 700 metres! Once again, our power bikes proved their worth. We arrived home via Lyon on 2nd July, having been in eight coutries and covered 5,000 kilometers.

The church of Souvigny on one of our local bike rides

In July Jean Michel went walking in the Jura Mountains for 9 days with his sons while I stayed home and worked, looking forward to my retirement in June 2020 more than ever! I did discover a bike route into Blois that avoids the main road though. We then cycled as much as we could during the weekend and evenings until the weather turned too cold.

The blue mosque in Istanbul

September took us for a week to Istanbul which we loved. We rented an apartment just next to Galacta Tower which proved to be the perfect location. It had a quiet little balcony and small garden which provided well-earned rest after a day out in the busy streets of Istanbul. We often set out quite early to visit the sites to avoid the crowds.

Our wisteria in spring

On the home front, our automatic watering system is up and running but we don’t quite have a mini Giverny as initially planned, mainly due to our clayey soil, but we are learning as we go.

Renovation of the studio flat I bought last year is making progress at last and should be ready for holiday accommodation this summer. We plan to offer an 18th century decorative experience with all modern conveniences. It is ideally located in the most historical part of Blois known as Puits Chatel and even has a little shared garden.

I’m still keeping up with my daily photo on Loire Daily Photo even though Aussie in France is vitually at a standstill but I hope to be able to post more in the future, especially when I retire!