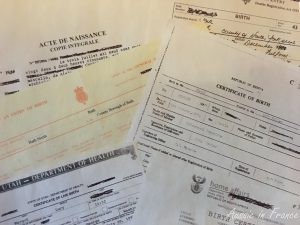 In my work as a sworn translator in France, the document I am asked to translate and certify the most often is the birth certificate.

So first, what is an acte de naissance and why is it called an acte? An acte in French is a written document established according to certain rules. In this case, it is the official document written up by the officier de l’état civil (registration officer) in a register kept for this purpose following a declaration of birth. It corresponds to the British “entry of birth”.

An acte de naissance is thus called an “entry of birth” in the UK.

So an acte de naissance is an entry in a register. When you ask for a copy of what is written in a birth register in France, i.e. a birth certificate, you have three choices:

THIS IS THE INFORMATION REQUIRED ON BIRTH CERTIFICATES USED TO APPLY FOR FRENCH NATIONALITY.

It can also have the following information, called mentions marginales (or endorsements) which makes it different from a regular British, American, or Australian birth certificate:

It is because of these endorsements that the French authorities always ask for a birth certificate of less than three months as it provides a record of a person’s civil status throughout their life. Since most of the English-speaking countries do not endorse their certificates, the date of issue of the certificate makes no difference. I used exactly the same birth certificate and its translation for all my resident visas, 2 marriages, 1 divorce and 1 naturalisation.

This is a summary of the information in the birth register:

This is a summary of the information in the birth register:

– surname, given names, sex, date and place of birth of the person concerned
– mentions marginales if they exist

In Great Britain, the most common type of birth certificate is called “Certified copy of an entry” and provides the following information:

– NHS number (in the more recent ones)
– name, surname and sex of the person concerned
– year, date and place of birth
– names, surnames, dates and places of birth and occupation of the mother and father
– name of the informant

Its format and other details, however, vary according to the place and year of birth.

There is also a shorter version called a “Certificate of Birth” which only has the person’s given names and surname, sex, date and place of birth, corresponding to the French “extrait d’acte de naissance sans filiation”. IT IS NOT VALID WHEN APPLYING FOR FRENCH NATIONALITY, for example.

In the United States, birth certificates are county-issued documents and not standardised within a state.

– name, surname and sex of the person concerned
– year, date and place of birth
– names, surnames, dates and places of birth and occupation of the mother and father

Florida has a “Certification of Birth” with

– child’s name, date and county of birth and sex
– names of mother and father (but not their birth dates)

– ID number
– name, surname and gender of the person concerned
– year, dates and places of birth and ID n° of the mother and father
– endorsements

Australia has different certificates for different states and years of birth, although the information is more or less the same. The document is usually called a birth certificate (sometimes just “Birth”).

Shorter versions exist which do not include the parents’ place and date of birth. THEY ARE NOT VALID WHEN APPLYING FOR FRENCH NATIONALITY.

There are a few idiosyncrasies. More recent ACT birth certificates use the term “Person furnishing particulars” to describe what previously concerned the informant. In Victoria, there is a section called “Endorsements” which is Queensland is called “Notes”. Both the ACT and Victoria include the marriage of the parents. Examples per state can be found on https://www.usi.gov.au/about/forms-id/birth-certificate-australian.

The long form  is a certified copy of the birth registration so contains details about
the parents, informants, witnesses, etc. depending on the state.

In Ontario it comes in a bilingual version called Birth Certificate/Certificat de Naissance.

So, to answer the question “What is a copie intégrale”?, it is a birth certificate that provides the following minimum information:

– given names, surname and sex of the person concerned
– year, date, hour and place of birth
– names, surnames, dates and places of birth of the parents

In the UK, it is called a “Certified copy of an entry of birth”.

In Australia and Africa, it is called a “Birth Certificate” or “Certificate of Birth”.

In the US, it goes by various names, usually containing the expression “Certificate of Birth”.

In English-speaking Canada, it is a long form birth certificate and in Quebec, a copy of an act of birth.

In France, birth certificates are issued free of charge (in a multilingual version* if requested) to:

They are obtained from the townhall of the person’s birth, either in person, by post (include a stamped addressed envelope) or on-line.

*The multilingual version is never a “copie intégrale” but only an “extrait d’acte de naissance” and does not have the parents’ birth date or age, nor their profession. They are usually used within the European Union and not accepted by the US government, for example.