I think the only thing I don’t like about having bought a 16th century house in Blois is that I’m going to be Blèsoise. I’m a bit put off by all those slippery s-pronounced-z-sounds. When you come from Townsville, the most you can be is a Townsvillean or a Townsvillite. We have Sydneyites and Sydneysiders, Melbournites and Brisbanites. Dare I suggest Darwinians? Surely not! And I wouldn’t know what to call people from Perth (they live on the wrong side of the country anyway) or Adelaide (which isn’t much better). 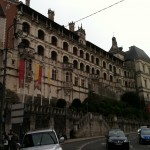 But in France, every town has its own adjective, called a gentilé (demonym or gentilic in English (bet you didn’t know that one) to describe its inhabitants and there are some real beauties. If you live in Saint Etienne you’re a Stéphanois, for example. It’s all a question of etymology and word origins of course. Somewhere along the way, the “ph” in the middle of Stephanos, the original Greek name, got slurred out and turned into a diphthong to give Estienne (after the “os” disappeared and an extra “e” was added at the beginning as well). The “s” was eventually lost altogether. I don’t know if you’ve ever noticed, but the circumflex in French – that little “hat” ^ – often corresponds to an “s” that disappeared, e.g. château = castle, mât = mast, bête = beast, fête = beast, gîte = guest, hôte = host, moût = must, etc.

The people in Angoulême are called Angoumoisins – see that ê indicating a lost “s” again. If you come from Auberive-en-Royans, you’re an Albaripains.  The inhabitants of Béziers are Biterrois, Réginaburgiens live in Bourg-la-Reine, while Cadurciens come from Cahors. If you hail from Carquegou, you’re a Carquefolien.  Now I don’t know why Jarlandins come from Châteaux-Arnoux but there is surely a reason and I wouldn’t mind being a Bellifontaine (beautiful fountain) from Fontainebleau. 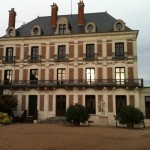 However, the real surprise is Saint-Adresee on the coast of Normandy, whose inhabitants are called Dionysiens, just like 19 other towns in France, but all the others are variants of Saint-Denis, directly derived from Dionysus, the Greek god of the grape harvest, very appropriate for a saint. It turns out that the town was originally called Saint-Denis-Chef-de-Caux. One day, a ship was caught in a fierce storm of the coast; the sailors all but abandoned ship to pray to Saint Denis, and the ship started to drift dangerously into shallow waters. The captain was furious and berated the crew, taking over the helm himself, and saying that only the only thing that could save them was their own astuteness. It woke them from their torpeur and they managed to steer the ship to safety.  So why Sainte-Adresse? Because “adresse” in French means cleverness or astuteness so the “astuteness” of the captain having proved to be more effective than Saint-Denis, the town was renamed Saint-Adresse.

So Blésoise it will be. For the moment, of course, I’m just a plain old Parisienne!

This entry was posted in Loire Valley. Bookmark the permalink.

4 Responses to Blèsoise – a demonym