Voting in the provinces

There are no provinces in France but anything that happens outside Paris is called “en province”. In fact, France is divided first into 27 regions, including Normandie, Picardy and Brittany (our region is called Centre and not Pays de la Loire as one might imagine), while some of them are overseas (Guadeloupe and Martinique, for example), which in turn are divided into 101 départements. 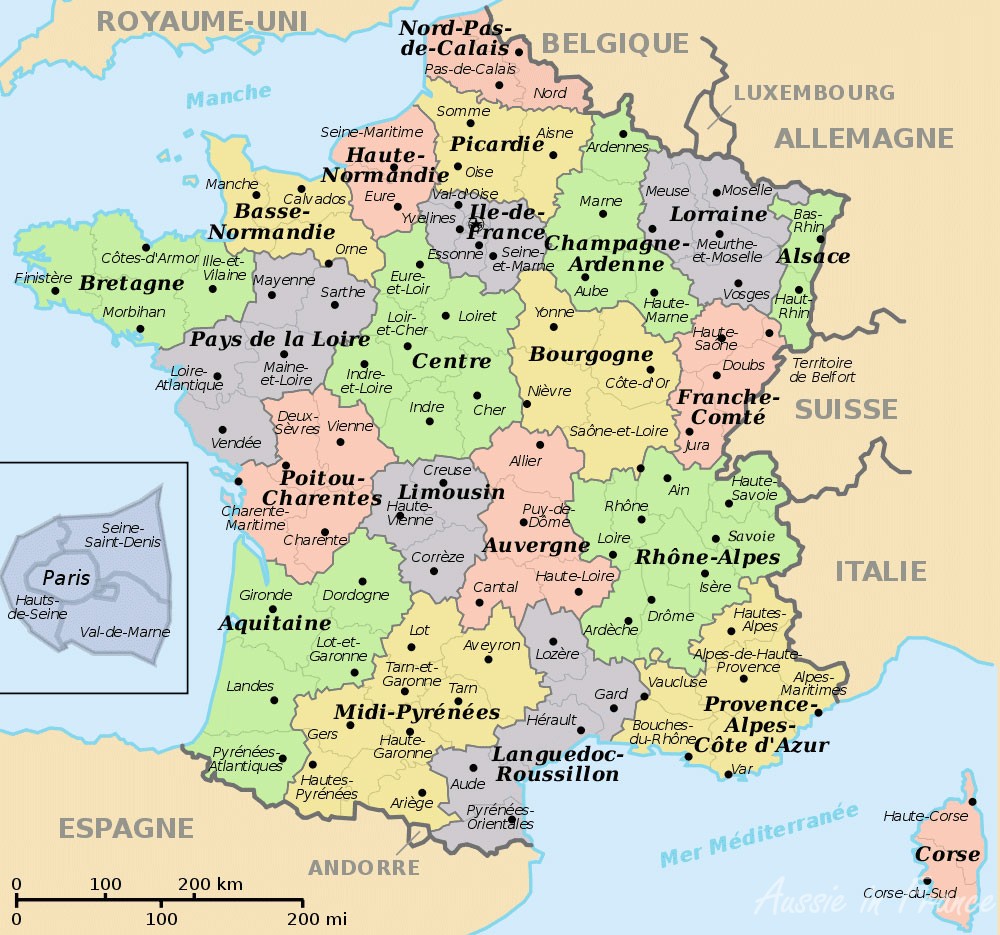 The present elections are for the départements (sometimes called departments in English which can lead to confusion) and called élections départementales. They used to be called cantonales.  Our département is called Loir et Cher, after two of the rivers it contains. We also have the Loire of course, but we share that with a lot of others as well. 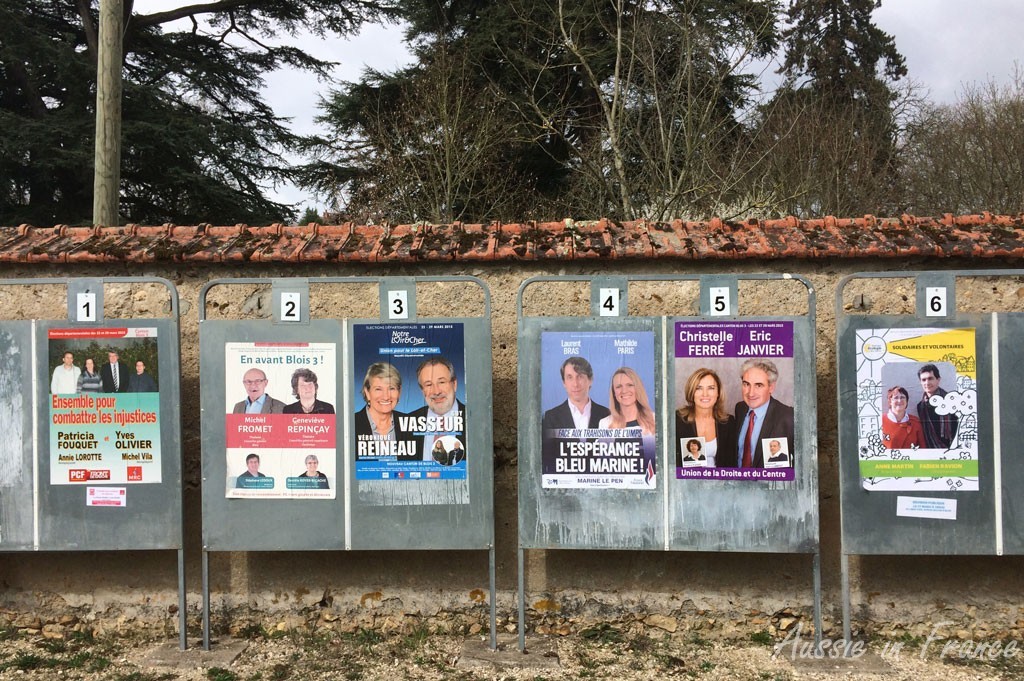 Election billboards outside the polling station

We made sure we registered on-line as residents of Blois before 1st January, which is the cut-off date for the place in which you vote for the coming year. Last time, we voted in Paris. Our polling station  is n° 408 which we learnt from our new voting cards which we only received earlier in the week. Voting is always on a Sunday in France. Fortunately it’s just down the road in the school that closed last year. 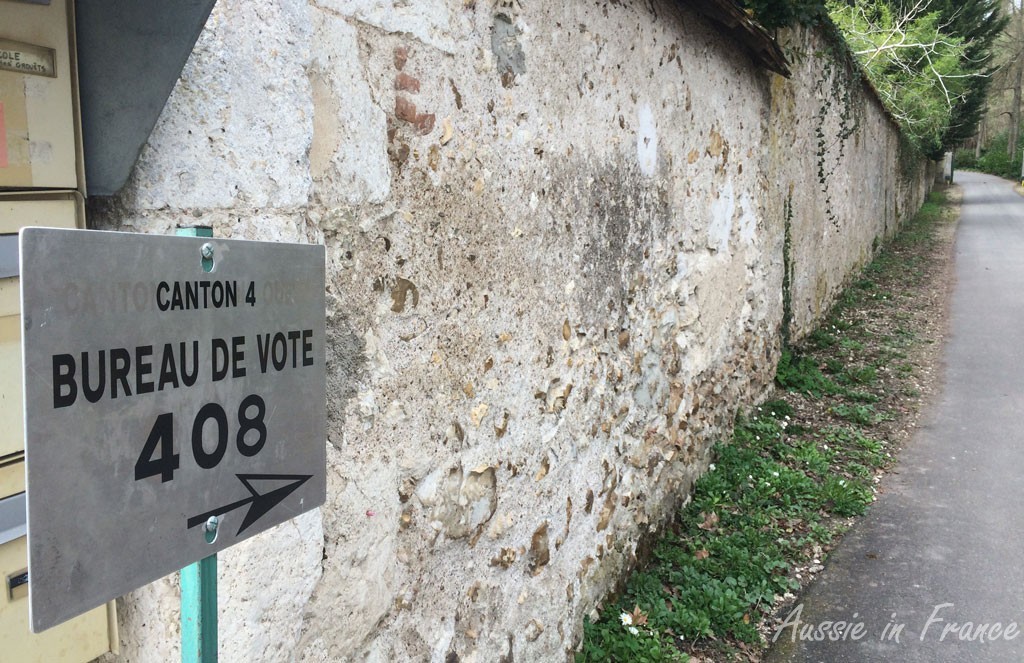 When we arrive around midday we are surprised to see quite a crowd. We follow the usual procedure. First we show our voting card and identity card. We are then invited to pick up a ballot. As we have already prepared our ballots at home (we received theseby mail during the week as well), we say we don’t need one. “Ah”, says the attendant, “since you have taken an envelope, you should pick up at least two ballots.” 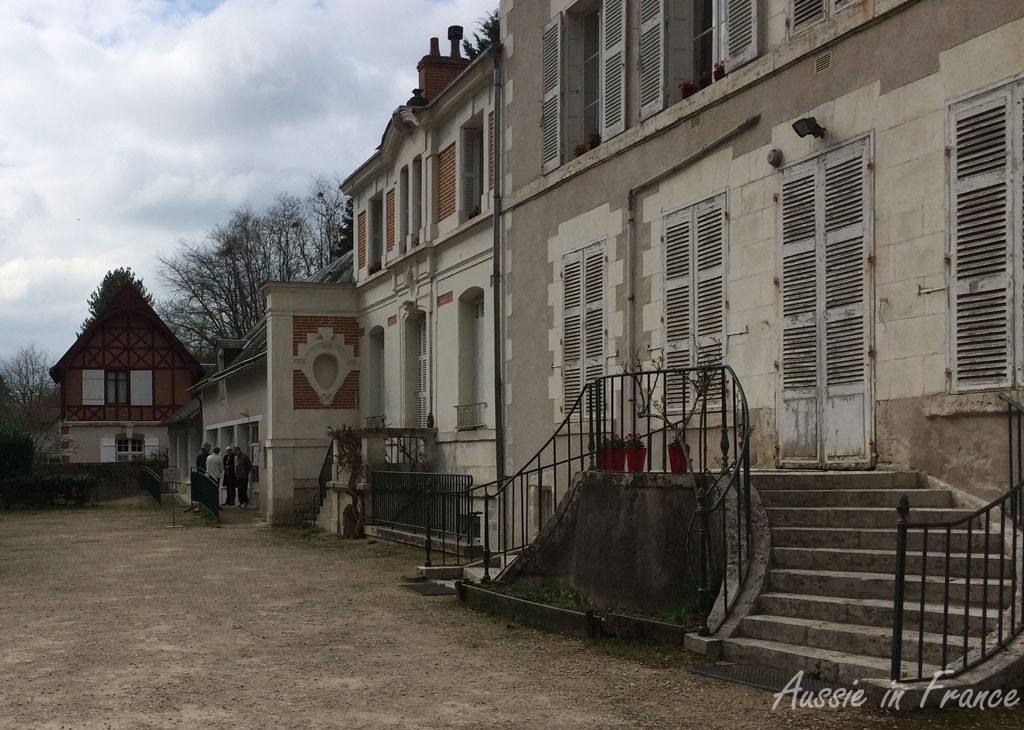 I proceed to take one of each, while Jean Michel refuses altogether. While he’s arguing, I go into a booth (isoloir) and put my ballot in the little blue envelope. I come out and stand in line for the next step. Jean Michel arrives behind me. “You have to go into the booth”, he says, “you can’t just put your ballot in the envelope”. I explain that I’ve already been in booth while he was arguing! 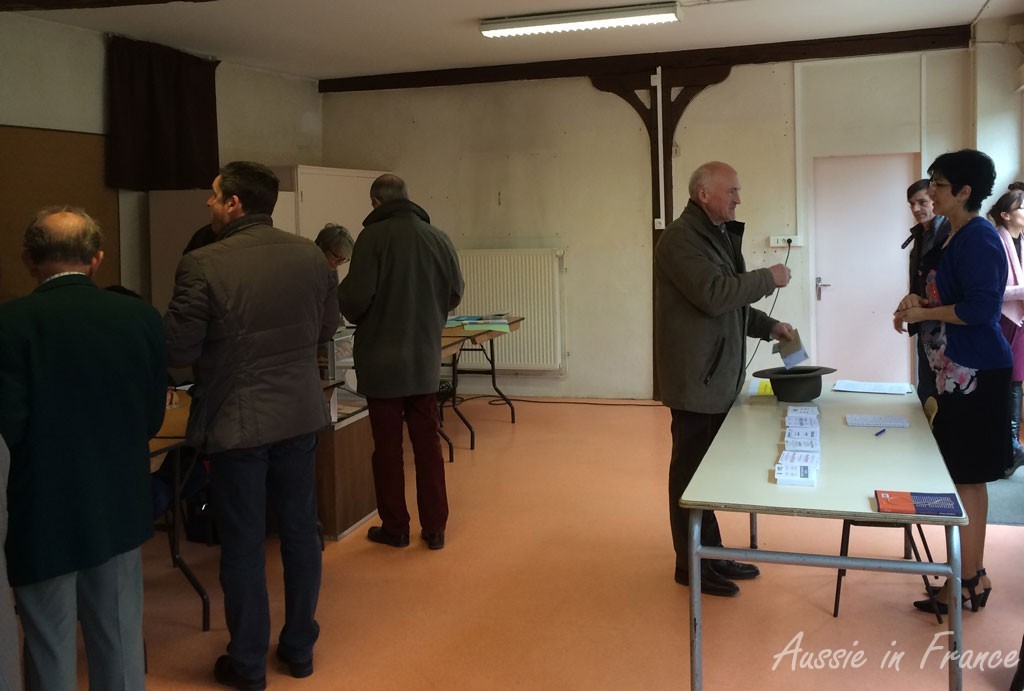 Step 1 where you should your ID and election card

I throw away my other ballots in the rubbish bag and take a couple of photos, hoping that it won’t be considered out of turn. No one seems to notice. I then give my ID to a man sitting at the voting table. He looks at it and gives it to the next man who calls out my name, loud and clear. The lady on the other side, who has the electoral roll, asks how to spell it. 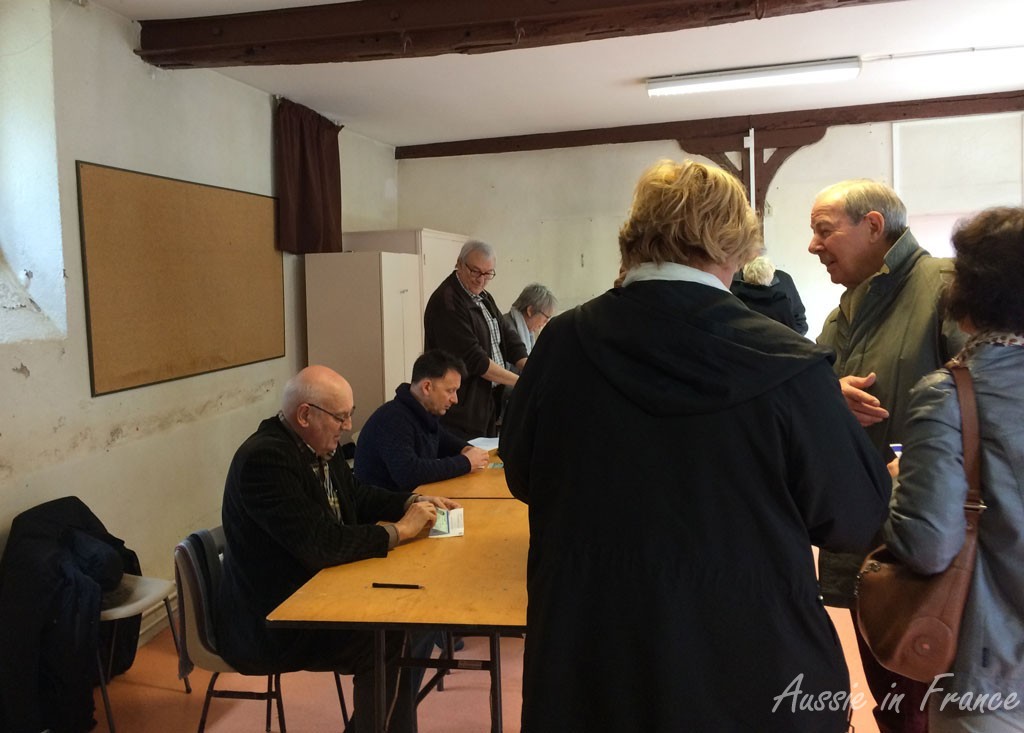 She then finds my name and I go past the urn to sign the roll. After I have done so, I am invited to put my ballot in the urn. “A voté” says the master of cermonies. 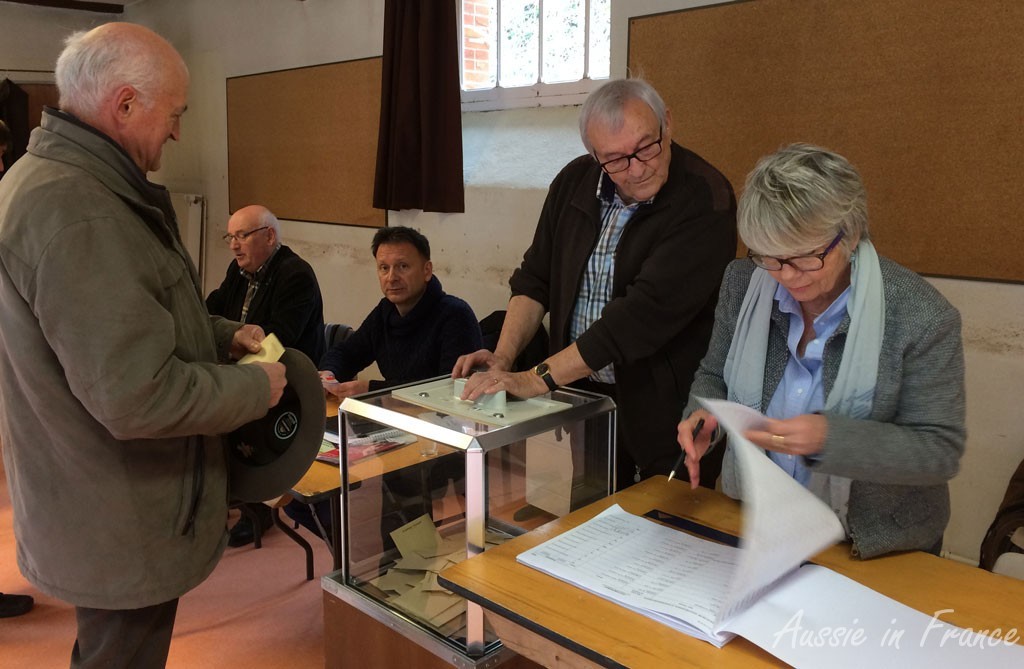 Jean Michel about to but his ballot in the urn

I then take a photo of Jean Michel about to vote.  We walk home feeling very Blésois now that we’ve actually voted here ! 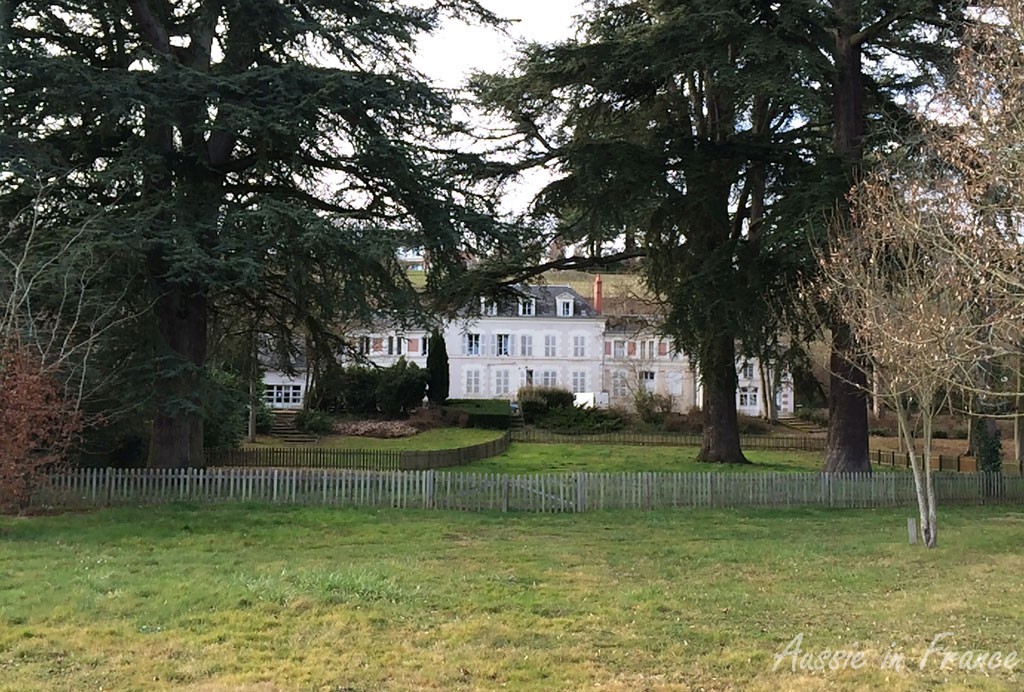 The school in our street from the outside

As I’m writing, the estimated results are UMP-UDI-Modem-DVD (right-wing/centrist parties), 36%, far ahead of their competitors, Socialist Party and allies, 28.5%, Front National (ultra-right-wing) 24.6%, the largest ever for these elections and the single party with the largest number of votes, and far left 6.3%. However, I don’t know what the turnout is but the figures at 5 pm showed it should not make 50% but is higher than the previous élections départementales by several percentage points. Unlike Australia, voting is not compulsory in France. 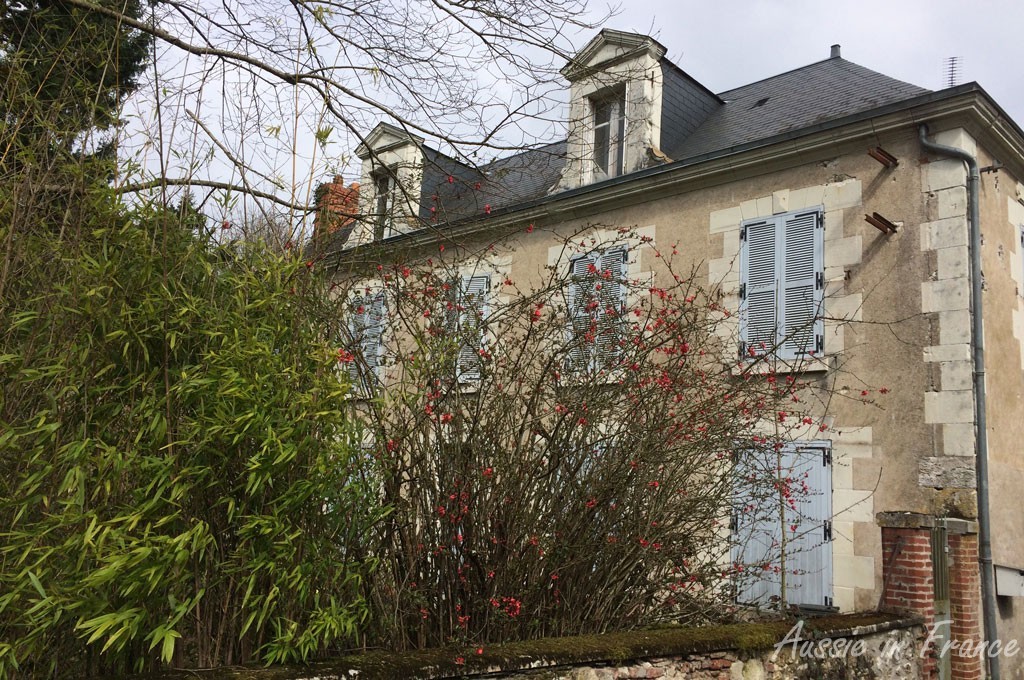 Spring flowers on the way back from voting

Most of France will probably have to vote again next Sunday because of the election system. One of the parties must have an absolute majority (mor than 50% of the votes) to get through on the first round. So looks like we’ll be doing the same thing next Sunday.

This entry was posted in French customs, Les Grouets and tagged voting in France. Bookmark the permalink.

7 Responses to Voting in the provinces