One of the things I like best about mushroom picking is that it’s like meditation. You’re so busy looking at the ground that your mind can wander wherever it likes. After saying a tearful goodbye to Leonardo at Gare du Nord on Sunday, we bought some sandwiches for lunch and drove north for about an hour to Senlis forest.

We went to our usual spot, which I won’t describe in detail because mushroom pickers never tell you exactly where they go. Who wants someone else getting there first ? We put on our walking boots and set off. There were a few toadstools along the way, which was promising. Would you believe there is no word for “toadstool” in French? They just talk about “champignons comestibles” and “non comestibles”.  You can either eat them or not. Toadstools are usually far more attractive than mushrooms. Beautiful purples and oranges, not to mention the amanita muscaris or fly agaric – you know, the famous red one with the white spots that’s always in cartoons. The edible ones, apart from the little amethyst deceiver (Laccaria amethystea), are usually various shades of white and brown and sometimes black. 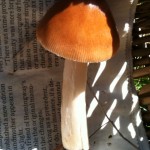 We soon branched off the path, wading through masses of heather and brambles. Get those muscles working again. Relationnel spied an “amanita vaginata grisea” which I had no recollection of whatsoever.  I usually steer clear of amanites which all contain a poisonous substance that fortunately is destroyed by heat. So all you have to do is cook them! But Relationnel assured me the grisette was fine. So I memorised the little stripy bits on the edge of the cap so I wouldn’t mix it up with any others. That’s the advantage of being with someone who knows about mushrooms. There’s always some little detail that distinguishes each mushroom and stops you getting poisoned! 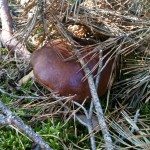 After lunch, with about twenty grisettes, a handful of quite large pine boletes (Boletus pinophilus) that we found hiding under fallen pine tree branches, and one tête de nègre (Boletus aureus), Relationnel suggested we go looking for trompettes de la mort (trumpets of death) called horns of plenty in English. The name in French is not as ominous as it sounds. It’s really because they’re black and found around All Souls’ Day on 1st November! He seemed to know where he was going although I didn’t remember finding them in that part of the forest. We arrived in a clearing and he said that was the place. Horns of plenty, along with chanterelles, are among the hardest mushrooms to find because they look like squiggles on the ground, peeking up from among the fallen leaves of oak trees.  We searched for a while but found nothing. 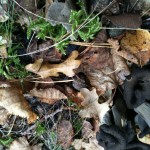 Horns of plenty half hidden by leaves

I decided I needed a rest and sat down on a tree stump while Relationnel went searching further. About 100 metres away, he called out, “Come and see”. By the time I got there, he couldn’t find them any more. Then we both saw them at the same time. The most wonderful thing about horns of plenty is that when you find one, there’s bound to be others. I put a plastic bag on the ground to protect my knees (I once spent two days in bed after bending over to gather chanterelles for an hour) and started picking. After ten minutes, we had filled our basket and I’d forgotten all about Leonardo going to Australia on a one-way ticket! 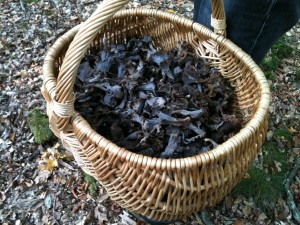 A basketful of horns of plenty

5 Responses to Trumpets of Death