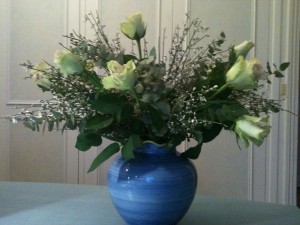 As my 9-year-old nephew in Sydney pointed out to me yesterday when I mentioned Saint Valentine’s Day to him, the “Saint” has disappeared from Valentine’s Day in English. Francophiles may wonder why it’s “la” Saint-Valentin and not “le”. Well, like all feast days, it’s short for “la fête du Saint-Valentin”.  Hence the feminine for what looks like a masculine.

Back to the day itself. Relationnel, who is a real romantic, arrived with a bunch of roses at lunchtime. He had taken the afternoon off so we decided to go to a couple of depôt-vente and find some things to furnish and decorate Closerie Falaiseau, our new house in Blois. The temperatures have risen since our previous excursion last Saturday so my hands and feet weren’t completely frozen this time. There is a website called www.troc.com that now has 190 second-hand shops in France so we chose one about three-quarters of an hour from the centre of Paris in the western suburb of Orgeval. 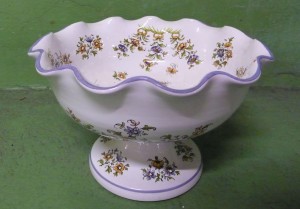 We found quite a few goodies, including a coffee grinder, a long-handled bed-warming pan, a set of pewter jugs, a coffee pot, some scales and a Moustier fruit bowl in troc.com and a new expresso/cappuccino machine and a steam iron in another place called Cash Converter, also a chain, which has a lot of musical instruments, hi-fi equipment, small appliances and other household goods. We learnt that you can see the items for sale at troc.com on-line and even reserve them. We’re going to see if we can get some dining-room chairs that way. 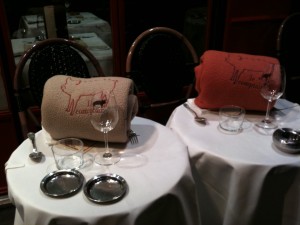 We got back to Paris just in time for dinner at La Bastide Odéon, which specialises in cuisine from the south of France. As we were walking along towards our destination, I suddenly saw a restaurant which looked as if it had towels rolled up on the tables outside.  How very odd! I was trying to imagine what sort of Valentine’s celebration was in the offing there when Relationnel said they were blankets for people to sit outside. The blankets even have the name of the restaurant on them – Le Comptoir! 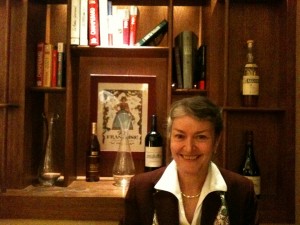 Our restaurant didn’t have a terrace with rolled-up blankets so we sat upstairs.  Relationnel thought he had discovered a new venue but in fact we had eaten there once before with friends from Canberra and enjoyed it. The tables are fairly spread out but there was a lot of noise in the room next door which we weren’t too thrilled with. At one stage, two of the people came out and Relationnel immediately recognised Robert Badinter, famous in French history for having successfully abolished the death penalty on 9th October 1981. After that, we didn’t mind the noise! 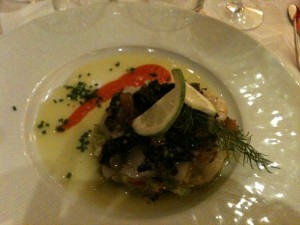 They had an excellent set menu for Valentine’s Day at 49 euros per person, starting with champagne and a little sweet pepper (piquillo) stuffed with goat’s milk cheese (very tasty). It was followed by a choice of two entrées – creamy scrambled eggs with black truffle or carpaccio of sea scallops with spicy avocado, sauce vierge (which just means olive oil) and horns of plenty (excellent) – and a choice of two main courses – grilled fillet of bass with candied lemon, creamy risotto and sea shell bouillon (which we didn’t take) or roast rack of lamb (extraordinarily tender), mutton stew gravy (sounds better in French – jus de navarin), eggplant caviar and candied tomatoes (they didn’t look very candied to me). 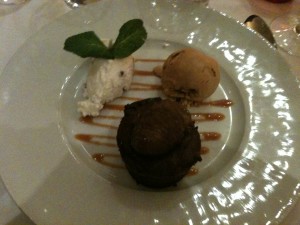 A bottle of wine per couple was also included in the menu. We could choose from two wines – a pouilly fumé sauvignon from the Loire Valley or a côtes du Rhône. We took the red, which we regretted afterwards – not because we didn’t like it, but because it was 15° !!!

As we walked past Le Comptoir on the way back to the car, we noticed that all the outside tables were taken and everyone had their blankets around their knees.