It’s vin nouveau time in Alsace, the white wine lovers’ mecca. We first tried it a few years ago. We were in Colmar and went into a bakery recommended in our guide book for its antique oven. They had a sign up for pain de vendange (grape-harvest bread) so we bought some of course. It turned out to be made of unbleached flour, walnuts, bacon pieces and raisins. Not bad. The lady in the bakery said we should have it with vin nouveau, the first wine of the season.

She sent us to a winery about ten minutes’ walk away – practically in the town centre! We followed the vigneronne into the cellar which was full of these huge oblong-shaped oak barrels called foudres. She turned on the tap and poured us a couple of small glasses. It was slightly sparkling, a little opaque, the colour of pale apple juice and slightly sweet. We were surprised to see her put the wine straight from the barrel into one of those large bottles you get mineral water in. She then pierced a hole in the lid so the gas could seep out because it was still fermenting. The price was an astonishing two euros a bottle.

We learnt later that you need a special licence to sell it and very few of the wineries bother. It’s always made from the pinot blanc grape, which is the first of the 8 Alsatian grape varieties to be ready for harvest. 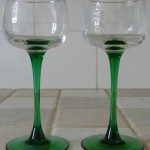 We took it home to drink with our pain de vendange in our new long-stemmed, green Alsatian wine glasses, sitting in front of the open-fire in our little Alsatian chalet. Jealous? We didn’t have too much wine though because it seems that large doses usually play havoc with your insides.

The wine and bread soon ran out of course so we had to replenish our stocks. We came across this deserted-looking winery on one side of the village square in Molsheim. There weren’t any signs saying vin nouveau but a man in overalls eventually appeared, looking a little worse for wear. He took our plastic bottle with a grunt and disappeared. This time we only paid €1.50 and there were no holes in the top. It seemed much thicker than the first time and we wondered whether it was the real thing. We couldn’t find any more pain de vendange so we decided to make do with pain de campagne and buy walnuts and raisins to go with it.

When we got home, we put the wine in a jug in the fridge. It was much more opaque than the first lot and sickly sweet. Jean Michel was convinced it was home-made apple-juice and that the man in the overalls was just getting his back on the American tourists because of my accent! So we put it back in the bottle and left it in a crate in the corner of the kitchen to take home to the kids.

A few days later, I went to get some potatoes out of the crate. My god, you should have seen the bottle – it was fat and roly-poly. I started to unscrew the lid very slowly and out came a great whiz of gas. It was now the same pale gold as the vin nouveau from Colmar with the same slightly opaque appearance. We must have been given much “newer” wine the second time. Putting it in the fridge had stopped the fermentation process but putting it back in the bottle in the heated kitchen had got it going again.

I hate to think what could have happened if we’d waited another day. A great explosion in the middle of the night with sticky liquid in every corner of the rented kitchen!

So after that, whenever we bought some wine, we discreetly produced our water bottle and asked if we could have some vin nouveau. One vigneron got us to taste wine from 4 different vats, each harvested a couple of days apart. We thought we were really clever when we managed to rate them from youngest to oldest.

Have you ever tried vin nouveau? Beaujolais nouveau which is a red wine comes out on the third Thursday of November. I’ll give a full report!

This entry was posted in Food, Wine. Bookmark the permalink.