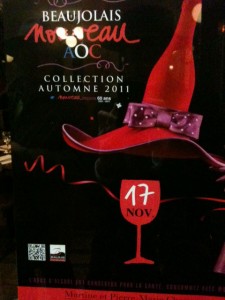 There are a lot of detractors of beaujolais nouveau, mainly because it’s not particularly good wine. After all, it is the first wine of the new harvest. They use this special process called carbonic maceration or whole berry fermentation so they can keep the fruity quality of the wine without extracting the bitter tanins from the grape skins. That means maximum colour and aroma without the usual atringency of red wine. You serve it slightly chilled, around 13°C (55° F).

It was the victim of its success for a long time and the wine growers started adding all sorts of chemicals to achieve the characteristic “banana” flavour. In the last few years however, there has been a distinct move to produce a better wine so it’s gradually gaining a better reputation. “Beaujolais nouveau” is celebrated on third Thursday in November. At lunchtime and after work, people go swarming into the local bars and brasseries to compare the different producers and decide whether or not it really does taste of banana! They often have a special “Beaujolais nouveau” menu on the blackboard outside as well, mainly cold cuts and traditional dishes such as boeuf bourguignon and pot au feu. 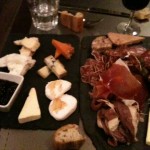 Some people even start at midnight Wednesday when it can be legally sold. When we lived near the Marne we used to go to the “Le Bel Air” in Le Perreux, which has a wooden terrace jutting out over the river (they heat it in winter!) but once we moved to Paris, we looked for something local. We discovered the area around the Saint Honoré Market, literally black with people, mostly with their own bottles of beaujolais and saucisson sandwiches. Then they brought in a law to say you couldn’t drink alcohol in the street and the beaujolais tradition took a steep plunge. 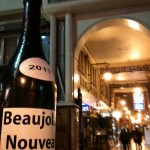 Biggest bottle of beaujolais in 2011!

Last year, Townsvillean and Annabelle Rouge were in Paris so we wanted to take them to one of our favourites on Rue des Petits Champs where they also had a brass band with a huge tuba. But it turned out there was nothing on so we went to a local brasserie instead – Le Musset – where they were serving platters of cold cuts and tried a couple of different types of beaujolais nouveau. We stayed on for dinner and Townsvillean had pot au feu which he is still reminiscing over.

I can remember being in Normandy once on 17th November and the local cheese cum wine shop offered us a tasting of beaujolais nouveau. We were delighted and tried out three different ones. When the shop keeper asked a regular if he wanted to taste as well, he turned up his nose and said, “I only drink bordeaux” (like a lot of people who know nothing about wine). I answered, “Ah but you have to drink beaujolais for the fun of it!” To my astonishment, he then picked up a bottle of Georges Le Boeuf, the most well-known and certainly not the best beaujolais nouveau, and added it to his bill. I guess he wanted some fun!!! 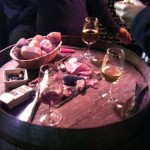 And there’s even an app for my iPhone this year to tell me where all the excitement’s happening!

This entry was posted in Wine and tagged beaujolais, beaujolais nouveau, bordeaux. Bookmark the permalink.