Posted on November 6, 2011 by Rosemary Kneipp

I just hot-footed it over to the tax office to file a new declaration because my accounting software made a mistake with my depreciation expenses (well, I might have had something to do with it). The tax office closes at 4 of course. I arrived with 3 minutes to spare only to discover it’s moved. Now why haven’t I been told about this? I file VAT (GST) every month, over the internet admittedly, but I reckon I should have been told anyway. 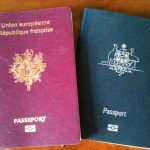 French administration is very annoying and complicated. They also write letters and instructions in incomprehensible French. None of this plain language for them. I couldn’t believe it when I filled in my last Australian passport form. It’s obviously written for dummies. I approve of that. At least you know what to do. A few years ago, when my office was in Nogent sur Marne, I had an Algerian neighbour. I was always helping her to fill in forms and write letters. She spread the word and I was soon helping another Algerian and a family from Mali.

After participating in a lobby to have the Australian constitution changed so that Australians living oversees could have dual citizenship, I applied for French nationality a few years ago. I went along to the Court to get all the forms and sent in my application. One of the things you always need in France is a birth certificate (well, an extract) less than 3 months old. This is because your life history is written on your birth certificate here  – naturalisation, change of name, marriage, divorce, legal decisions relating to legal incompetence and death. So I explained in my covering letter that Australian birth certificates don’t give that sort of information (I didn’t want to have to get another certificate plus have it translated officially at great expense).  Relationnel was convinced that they’d ask for more papers (they always do).

However, all went well and after a few months, I was contacted by a police officer who came to visit me at my office to make sure that I was really living in the country and spoke French. Another few months went by and I had to go to the local police station with my diplomas. The man who interviewed me had no idea what he was doing. He admitted he’d never done it before! I also had to prove I was well integrated into the community. Then exactly one year from the date of application, on 2nd December 2002, I was declared to have French nationality. On 29th March 2004, I received a FRENCH BIRTH CERTIFICATE . Isn’t that too much ?

Now I have two passports – French and Australian!

4 Responses to Battling with French Administration