Beds I Have Known

Posted on December 9, 2011 by Rosemary Kneipp

I’ve already told you about my obsession with showers. I’m probably just as obsessed, if not more obsessed, with beds. Not as easy to do something about though. I don’t think I’ve always been this fussy. It’s probably developed with age.

The worst are the ones that sag in the middle, particularly when there are two of you. Now this shouldn’t be a problem – it’s not when you’re young anyway. That’s why I think age has something to do with it. Inner spring mattresses are often the culprit here. They can also cause hard lumps, particularly if they happen to be the beds you jumped on as a child. 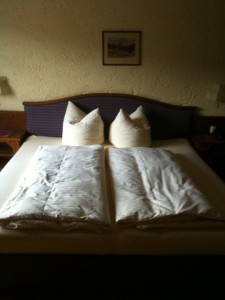 Bed in a hotel in Innsbruck

I have horrible memories of terrible beds in French hotels and rental homes in the past. They’ve improved considerably over the years, partly because we can afford to stay in more expensive accommodation, I assume, but also because hotel owners and Gîtes de France have now realised that foreigners (like me!) don’t like awful beds. We’ve never had the problem in the Netherlands, Germany, Austria , Luxembourg or Switzerland  because double beds always consist of two single beds joined together. They even have separate covers most of the time, usually dooners. Now, I think that is very strange. There is something I don’t understand. I still haven’t worked out the logistics. How do you sleep at night (and otherwise use the bed) with two separate mattresses and two separate covers? In Italy, you usually have a double bed which is rightly called a « letto matrimonial » and is generally comfortable. The country hasn’t gained its reputation as the land of the Latin lover for nothing.

Speaking of dooners, that is something I have a problem with as well. When I first moved to France, I loved them. I bought a very expensive one made of goose and duck down and used it for years. Then I guess I got used to the cooler weather so that now, even when the heating is not very high, I absolutely roast with a dooner and have gone back to using a woollen blanket. However, dooners have become standard equipment in rental homes so we usually take our own!

In the last place we lived, we had a small bedroom so we had a small bed (140 cm). When we moved into Paris though, we decided to get a BIG bed, meaning a queen size. However, I didn’t realise it would have two separate bases joined together, nor that that would pose a problem. However, instead of sagging in the middle, it gradually developed a hump in the centre which forced us to sleep on the outer edges. Now the reason for the two bases is that it is otherwise impossible to get a queen size bed up to the fourth floor without a lift. This, it seems, is a recurring problem in Paris.

We eventually decided to get a new bed and went to a local store. The salesperson said we could claim on our warranty and get the other one replaced. I hadn’t thought of that! So we went to back to the original shop and organised to have the mattress replaced. I was relieved because despite my obsession with good beds, I find it nearly impossible to lie down on a bed in a shop and decide if it’s the right mattress or not. Some are very treacherous. You think they’re fine and they turn out to be too hard or too soft. And it’s a bit difficult to take them back. What’s that saying? If you make your own bed, you must lie in it? 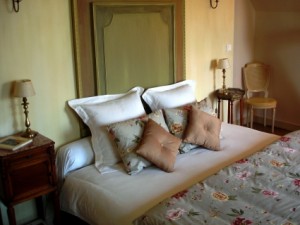 Since we’ve been going to B&Bs, which have really upgraded in the last ten years in more ways than one, we haven’t had any more bed problems. Our first and all-time-favourite B&B in the Cotentin in Normandy, Le Clos Postel, has the most wonderful bed imaginable. First, the bed itself is not too hard and not too soft. Then it has this luxurious down cover between the mattress and the sheet that doesn’t generates just the right amount of warmth and is oh so soft.  I couldn’t wait to have one myself so we got all the details from our hostess Lydie. Now we have one of our own and that, together with our electric blanket in winter, makes our bed the best place in the world to be!

B&B Le Clos Postel : http://www.clospostel.com/, though it is probably a big mistake sharing the link because if you all take my adivce, there will never be any room for us!

3 Responses to Beds I Have Known