Two Types of Luxury in Paris 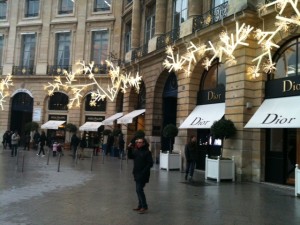 I just went to Place Vendôme, not to buy Dior perfume (not my scene) or Mikimoto pearls (I already have a double string, inherited from my mother) or a Boucheron watch (I’d be too scared of losing it) or even to have tea at the Ritz (it’s closed for renovation). I was amazed at how many people were milling around. I guess there are a lot of rich foreigners between Christmas and New Year. 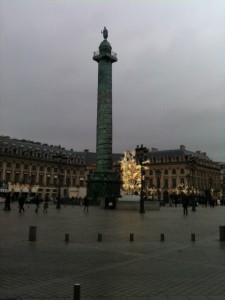 I’m not sure I really like the decorations – I guess they’re supposed to represent reindeer’s antlers. Do you know, the word for antlers in French is “bois” which means “wood”. Seems a little mundane for such striking appendages, doesn’t it? Place Vendôme, of course, has one of Paris’ many phallic symbols, the Vendôme Column, erected in 1810 as a imitation of the Trajan Column in Rome, with a statue of the Emperor Napoleon on top. I’m sure you know some of the city’s other phallic symbols – the Eiffel Tower, the Obelisk at Place de la Concorde, the Montparnasse Tower and all those Buren columns in the Palais Royal. Then there’s Mitterand’s contribution, of course, the Library of France, which has no less than four columns! 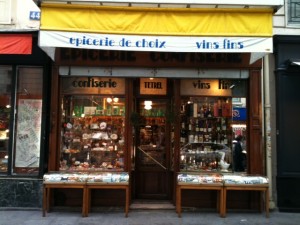 After leaving Place Vendôme, I came home via Rue des Petits Champs (not to be confused with nearby Rue Croix de Petits Champs) and went past another bastion of luxury, but on a much smaller scale – Epicerie Tétrel, at n° 44 -known for its fine chocolates and luxury preserves. When we first moved to the area in 2005 (I think), the lady who ran it looked as though she was nearing 90 and would pick the chocolates up with her fingers! None of this modern hygiene stuff for her. 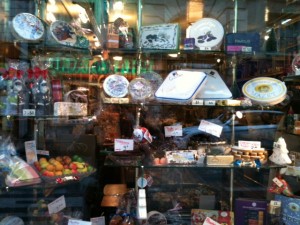 I was appalled, but Relationnel said they really were the best chocolates around. About a year ago, her daughter took over (she uses plastic gloves) and is just as unfriendly, but the inside of the shop is a real treat. It’s like stepping back in time. I was told grumpily that I couldn’t take photos of the inside but the outside window gives an idea of what you’ll find. It’s full of traditional products such as tinned sardines, sweets, candied fruits, biscuits of every shape and size. A most original place for presents!