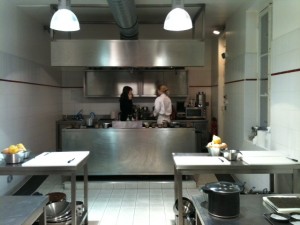 Last Christmas (not the one that’s just been), Black Cat and Leonardo gave us a voucher for a cooking class at L’Atelier des Chefs in Paris where we learnt to make foie gras a few years ago. We kept putting it off until it was nearly too late (the deadline was 31st December) but finally chose a class and booked it, only to be told two days beforehand that it was cancelled! We got an extension for a month and chose another class in January: foie gras maki, fillet of duck with butternut pumpkin purée and tarte tatin with quinces (this is a very popular and typical French upside-down cake usually made with apples).

Our class of seven people started off with the tarte tatin, peeling and slice the quinces which is a feat in itself they’re so hard. 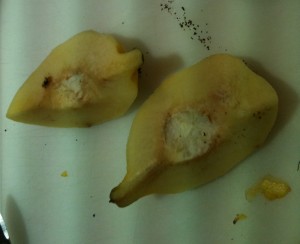 Then we made the caramel. This is not something I’d ever done though Relationnel is quite an expert. You start with a large quantity of white sugar making a little hole in the middle if you’re using an induction cooker because the heat starts from the middle and radiates outwards. 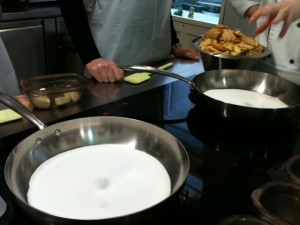 Using high heat, you start melting the sugar. As soon as it starts to liquefy, you use a heat-proof spatula (called a “maryse” in French – I bought one at their handy shop before we left) to gradually incorporate the surrounding sugar. 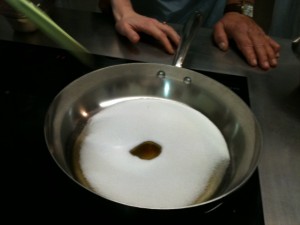 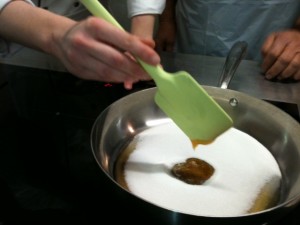 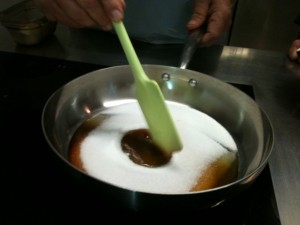 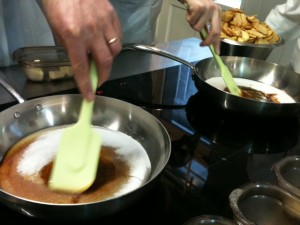 When it’s completely liquid and a light caramelly colour, you turn down the heat. If it gets too dark, the caramel will become bitter. 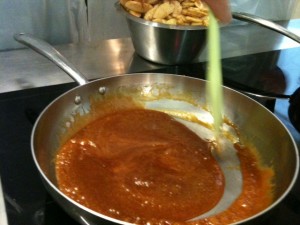 Then you add the butter (this is not a low calorie dish), ginger and cinnamon. 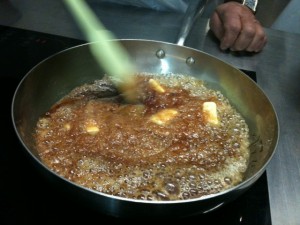 Keep stirring all the time until the butter has melted. Add the slices of quince and leave them sitting in the caramel without mixing until the caramel becomes hot again. If you mix them too early, the caramel will go lumpy. Mix well and cook on low heat until the quinces are cooked. 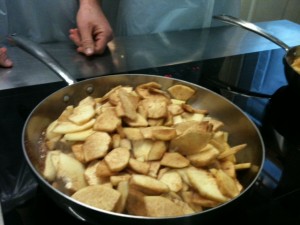 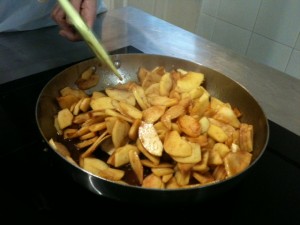 In the meantime, you cut out a disk about a centimetre bigger than the case all round and prick it to stop the flaky pastry blowing up. We were using individual tart cases but you can use a larger one of course. 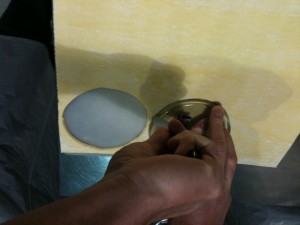 When the quinces are cooked, you put a layer into the tart case piling it up a bit, then cover with the pastry, turning it under on the sides to seal in the quinces. You can line the cases with greaseproof paper if you think the tart will stick. 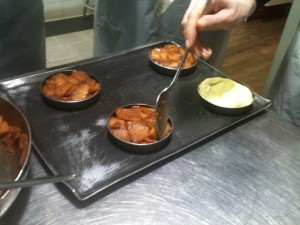 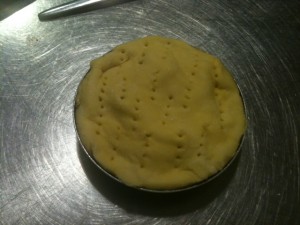 Cook in an oven at 210° for about 20 minutes for small tarts, a little longer for a large one.  Remove from the oven. When the tarts are warm, you turn them out. We topped them with a salted butter caramel cream emulsion that I will not tell you how to make because you need a siphon and I’m sure you don’t want all those extra calories anyway! The trick was not to squirt it on the person sitting opposite you. You can just serve it with a bit of crème fraîche the way they usually do. 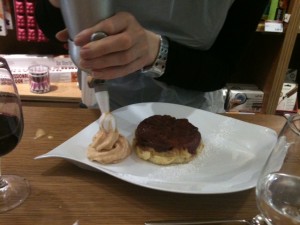