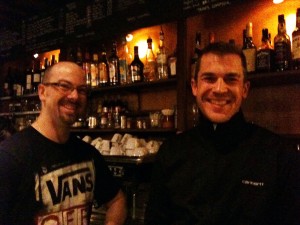 Well, it’s not really called The Dry Tree but L’Arbre sec. You’d think that a translator could come up with something better, wouldn’t you? But in fact, it has an historical reference that the more learned amongst us will no doubt know. It’s also called the Solitary Tree and was first recorded by Marco Polo somewhere in the wastelands of northern Persia. So, since my culture does not quite extend that far (unfortunately), I think I can be forgiven for the poor translation. 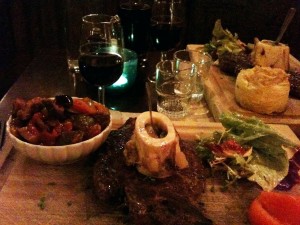 It’s actually one of our neighbourhood restaurants, called La Taverne de l’Arbre Sec, on rue Saint Honoré, better known (at the other end) for it’s exclusive shops. We mainly go there to have côte de boeuf, but it has other things such as rumpsteack and sea scallops Provençale, with prices ranging from 14 to 25 euros. They have a good choice of vegetables which is great for those of us who are not natural skinnies – gratin dauphinois, home-made ratatouille and home-made chips. I chose the ratatouille of course, even though my côte de boeuf probably took up half the plate, so I was not exactly obeying the 1/4 protein, 1/4 carbs and 1/2 vegetables rule. 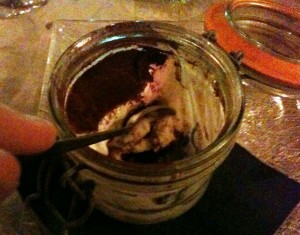 The service is unfailingly friendly and the clientèle is French and local, usually in the 20 to 30 year age group, but we don’t let that bother us, obviously. You can get wine by the glass, pichet or bottle. They have a covered terrace in the winter, one side for the smokers and the other side for the non-smokers, which is unusual. It’s very old and dark and atmospheric with lots of rough timber beams. The room downstairs has a vaulted ceiling.

When we were leaving, I asked the owner, Sylvain Lemarchand, if I could take a photo for my blog. He told us that he was very admirative of people who wrote blogs that other people could benefit from, and gave us his cheesiest grin!

4 Responses to The Dry Tree