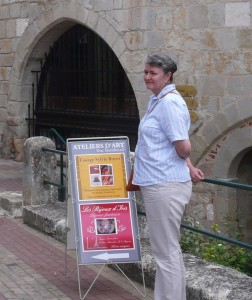 In October, just before I started the diet (I didn't know I was in the photo!)

A month ago, I talked to you about my discovery of the benefits of fish for which I have gradually developed a real liking and which have certainly helped me lose weight and keep it off. Christmas was also approaching and I was a bit concerned about a backslide. As it turned out, I needn’t have worried. I was able to enjoy a couple of côtes de boeuf and lamb chops cooked in the open fire, foie gras, Rozan chocolates from the Pyrenees (my favourites), wine at night and other goodies and still lose 1 ½ kilos by mid-January. I could gradually see the centimetres coming off as well.

The clothing situation when you’re losing weight is a bit tricky unless you have an unlimited clothes budget. Fortunately I had kept a few things from the next two sizes down so the first winter wasn’t too much of a problem. As spring came, I was a little short though but determined not to buy too many clothes that I would only wear for a brief period. In seven months, between mid-October and mid-May, I lost 12 kilos and it was beginning to show! 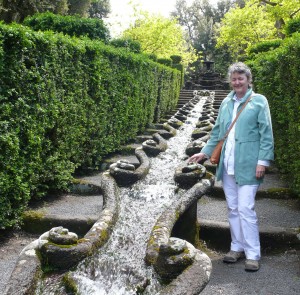 In Italy, after losing 12 kilos

For the first few months, only my family and close friends had really noticed anything, but I can remember going to a get-together at the university in May wearing a new outfit I had splurged on after my last appointment with Doctor Séjean. I suddenly had women swarming around me, telling me how great I looked and asking me how I’d done it. They, too, had been told that after 50, it was pointless even trying to lose weight. That was probably the greatest kick I got out of my diet and was enough to keep me going while I lost the next 8 kilos!

With the warmer weather, I had started cycling again but probably the most effective move was to go back to the swimming pool. I now felt that I could face up to seeing myself in a swimsuit again. I decided to take things slowly and convinced Relationnel into going with me on Saturday or Sunday. Once I was doing 15 x 50 metre laps, I started going a second time during the week by myself.  I gradually worked up to 30 laps, which is what I used to do many years ago, but I was much slower than before (age maybe?). In the end, I decided to go back to 20 laps because I was also getting too tired. Doctor Séjean regularly prescribed blood tests and gave me magnesium, vitamin B6 and vitamin D supplements accordingly. 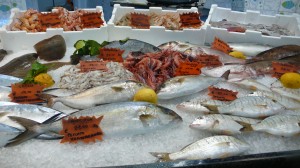 Very soon after, we went to Italy for a month, moving around quite a lot. Doctor Séjean had told me just to take it easy, eat as much fish and vegetables as possible and pasta too if I wanted because it’s made with durum wheat which is easier to digest than fresh bread. We were mainly staying in B&Bs, with a week in an apartment on the Bay of Naples and the weather was very nice so we tried to only have one meal out a day. The rest of the time we bought picnic food from the markets or local shops, mostly salad vegetables, raw fish and cold meats. We had a glass or two of wine with our meals as well.

I guess we were getting a lot of exercise from walking but I was surprised when I came home to discover I was the same weight as when I left. In Italy, it’s quite easy to get vegetables in restaurants, particularly grilled zucchinis, eggplant and capsicums. One of the main things I had noticed after a few of months of dieting was that I no longer wanted carbs with each meal so I usually only had them once a day.

By then, any desire to binge or snack had totally disppeared!

This entry was posted in Dieting, Food, Italy, Lifestyle. Bookmark the permalink.