Keep Those Clothes On!

(In April, don’t remove a stitch,
In May, do as you please.) 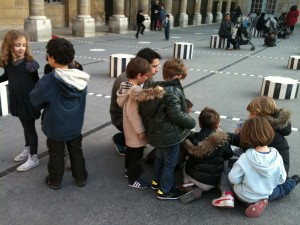 It’s 19°C today with bright sun and blue sky and I just powerwalked up to Concorde and back. And there they were, the poor little kids, all rugged up in their thick coats and boots and even hats. The luckier ones were bareheaded and some had even taken off their coats – but they were probably foreigners anyway!

I’ve heard this saying many times since I arrived in France in 1975 and not just in the north. It seems that the slightest little breeze will bring on immediate coughs and colds. In the metro, the kids must be so hot in the winter. I can’t bear keeping my coat on for any length of time and I certainly wouldn’t be able to put up with wearing a balaclava or a hood with a thick scarf around my neck in a train.

Our flat is totally overheated even though we turn the radiators off but if the heating is adjusted so that we have the regulatory 19°C on the fourth floor, the people on the ground floor will only have 16°C. It’s the hot water going through the pipes that heats our place. The trouble is, you get used to having 23°C all the time. When we move to Blois, I suspect that I’ll have to invest in some warmer clothes! 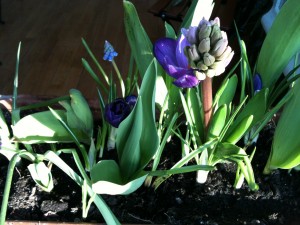 But spring is well on its way, with daffodils and hyacinths and magnolias out in the Palais Royal Gardens. I swear I can see my bulbs growing in the window boxes. Yesterday, there was only one crocus out and today there’s a whole crowd of them. Not easy to take a photo though. Our balcony is actually just a gutter but it’s just wide enough to fit a small table and two chairs if one person sits down first and pulls the table forward to let the other squeeze in. 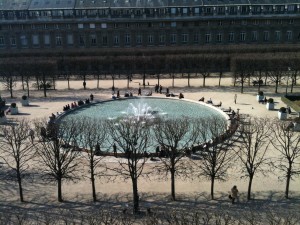 The people are milling around the fountain soaking up the sun. I must say that Parisians are real sun lovers. I guess if you’re starved for it the rest of the time it’s understandable. It’s actually surprising weather for March when you’re supposed to be getting “giboulées” which means a sudden burst of rain, sometimes accompanied by wind, hail or even snow, and often followed by bright sunshine. Not my scene!

5 Responses to Keep Those Clothes On!