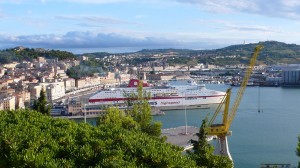 Well, as I explained in Part 2, I left Milan furious as a result of our huge garage bill. I hate being had. We took the motorway straight to Ancona on the Adriatic Coast about 400 kilometers away and got there at about 4 pm. Impossible to find our B&B, Villa Fiore Conero. It was on one of those streets split in half and we couldn’t find the other end. The instructions given on the phone were not very helpful but we eventually got there. 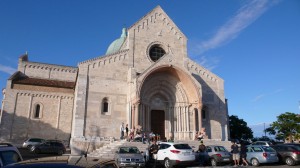 Not a particularly warm welcome. Only 15°C and a steady downpour, hardly what we were expecting in Italy in July! We had chosen Ancona which is a big seaport so that we could cycle for a couple of days in nearby Conero National Park and wouldn’t have too far to go  to take the ferry to Split. The room in the B&B was spacious and comfortable so we had a short rest before venturing into the town. The main attraction proved to be a hill with a church on top and a spectacular 360° view. Fortunately the rain had stopped by then and we could enjoy the view along with half the population of Ancona.

The centre of the town was so deserted that we decided to go to Sirolo which is in the middle of Conero Park and built on a promontory overlooking the sea. After visiting the town, which is very touristy, we found a wonderful place for an aperitivo right on the esplanade where we could watch the sunset over the Adriatic. Afterwards we had an excellent fish platter in a very friendly restaurant called La Cambusa on via Cialdini. 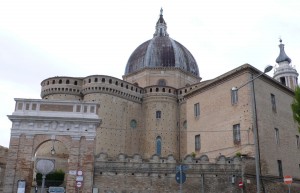 Next morning, we optimistically dressed for cycling but pouring rain during a very disappointing breakfast made us change our minds and go to Loreto instead which turned out to be the most popular religious destination in the area. The rain let up and we were able to wander around the town and visit the church which contains what is believed to be three walls of Mary’s house in Nazareth. We arrived during mass and visited the house in Indian file without having to queue. As soon as the mass was over though, there was suddenly an enormous line of people, many moving forward on their knees. 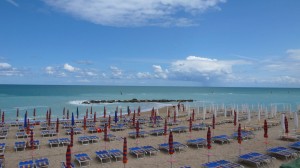 The sun suddenly appeared so we headed for Porto Rennati where we bought some picnic goodies and set off on our bikes along the seashore, witnessing, for the first time, Italy’s famous “private” beaches with their rows of matching deck chairs and umbrellas (all folded up because of the low temperature). We finally found a public beach for our picnic but stayed on the rocks because our feet didn’t like the strange, sharp sand.

On the return journey, we had an excellent (and cheap) cappuccino in a bar attached to one of the private beaches then made our way back to the car. In the evening we were able to walk up the hill to a restaurant near our B&B, Villa Romana on Via Montacuto, and have an excellent tagliata (not as good as our first experience in Tuscany, but still not bad). I had to speak Italian because it was too out of the way to attract tourists. We weren’t quite sure what we were ordering because my iPhone app didn’t have most of the things that were on the menu.

Early departure next morning to take the ferry to Split. Terrible organisation – we had to queue for ¾ hour just to get our tickets (we had already reserved and paid for them over the Internet with SNAV) and then had to drive for ages around the terminal before we got to the boat. Relationnel parked the car while I went to find a seat. The journey seemed to take forever and was an hour late.

But at last the Croatian Coast came into view. Everyone crowded onto the deck and it felt like summer at last – a blue sky and 25°C. Our holiday in Croatia was about to begin!

One Response to My Croatian Itinerary – Part 3: Ancona