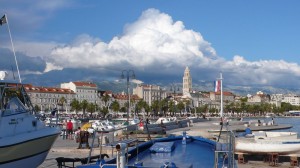 When we got to Split from Ancona in Italy, we drove off the ferry and were immediately searched. Maybe the customs official found it strange we should have so much luggage. Well, the car fridge already takes up a fair amount of room and then there’s the bike gear and stuff. Anyway, she finally waved us on and we followed the Tom Tom to our rental flat. Unfortunately, the entire street was being dug up and we eventually decided to drive through the roadworks to get there despite protests from the workers at the other end but our hostess Antonela was waiting for us and explained the situation. The up side was that Antonela said we could park in the courtyard. 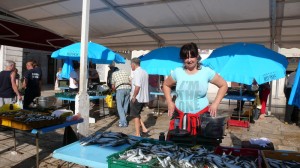 The flat was clean and comfortable with free wifi and a washing machine. It was also very well located, just a short walk from all the sights. We couldn’t use the terrace with the seaview because of the roadworks but it didn’t really matter. We really enjoyed Split. There were lots of historical places to visit, we found a restaurant on the edge of the bay with an excellent “fish plate” (Atlantida) went to the early-morning fresh fish and fresh produce markets and had a wonderful bike ride on Marian Hill which I have described in Cycling in Croatia. 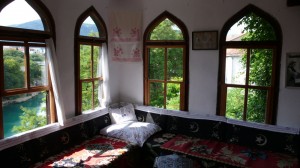 After two nights in Split, we went to Dubrovnik via Mostar in Bosnia Herzegovina where it was shockingly hot. We went through border control twice and waited in long queues each time for no apparent reason.The speed was limited to 60 kph most of the time, also for no apparent reason. We saw shell-shocked buildings along the way and walked over the famous arch bridge built by Suliman the Magnificent which was destroyed during the Yugoslavian war and rebuilt, bought a souvenir for the Christmas tree, had lunch in a very friendly restaurant called Hindin Han and visited Biscevica House, a traditional Ottoman home. 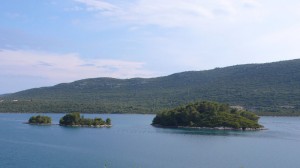 The drive along the coast to Dubrovnik was quite stunning, with little islands everywhere. We went through a small stretch that is part of Bosnia Herzegovina, its only coastal section, waiting in long lines at the border once again. When we got to Dubrovnik, we had parking problems. We hadn’t realised you can’t take your car into the walled city, not even to drop off your luggage. We finally parked in an extremely extensive parking lot near one of the entrances, grabbed a minimum amount of stuff and went to find our flat. 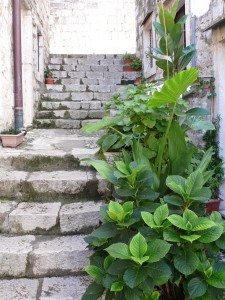 The apartment we stayed in was recommended to us by Black Cat and it was perfect. A large comfortable room with a basic kitchen and a shower room, right in the middle of the old town, but in a tiny street up several flights of steps, a haven from the noise and bustle of the tourist trade and very reasonably priced. The owner’s son, Matko Jelic, who  speaks both French and English (his wife is Irish) was very kind and helpful and even found us a free parking place outside the city walls from which we were able to take a bus back to the city. There wasn’t a wifi connection but Matko indicated a café in the old town called the Skybar with free wifi. The connection code is on the bill – you just have to order a drink. 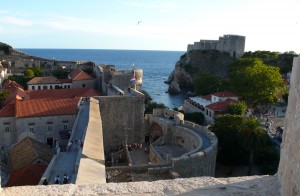 We stayed three nights in lovely old city of Dubrovnik and I particularly enjoyed the rampart walk at sunset. Unfortunately, it was there that I ate some unsavoury prawns and got the infamous “turista” that kept me indoors and close to the bathroom for most of the time we were there. We had booked an all-day boat ride to some of the islands but I wasn’t up to going. But one day we’ll go back!

This entry was posted in Croatia, Sightseeing, Travelling and tagged Dubrovnik, Mostar, Split. Bookmark the permalink.