A Parisian Restaurant with a Tree in the Middle 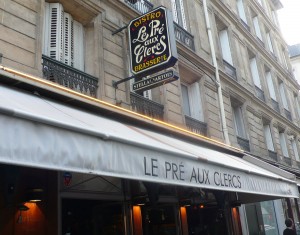 The first time we went to Le Pré aux Clercs on rue Bonaparte in the 6th arrondissement was on the way home from a week’s holiday and it was about 10 pm. Despite the late hour, it was crowded and we were taken upstairs. Relationnel took the dish of the day – a large sole – which he has never forgotten! The next time we went, we were seated downstairs and discovered, to our amazement, that there was a large tree in the middle of the restaurant. Unfortunately, the sole was off, but we enjoyed the meal. We’ve been back several times since. 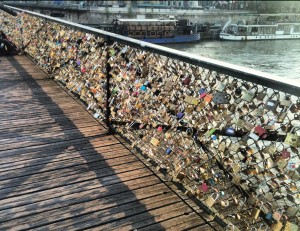 When we walked across the river on Saturday night via the Pont des Arts, where the lovelocks have positively taken over, the streets and particularly the terrace cafés were packed, especially since it was one of the first sunny days in quite a while. I got Relationnel to check the map before we left, because I remembered our getting lost last time despite his usually good sense of direction. We went the wrong way – again – but enjoyed the walk. There was even a little old lady dancing to a live jazz band in front of one restaurant! 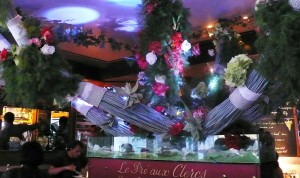 Given the number of people in the streets, I decided to phone and check they had a table. “Pas de problème”, said the waiter, without taking my name. There were people queuing up when we arrived but we got a table straight away. To my surprise, the tree had been completely transformed. I learnt later that it had never been a real tree – I guess I was rather naive to think you could have one in the middle of Parisian restaurant anyway! 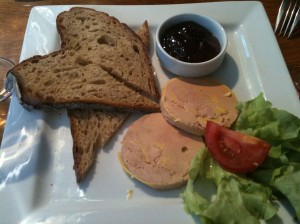 Despite the sun, the temperatures were a little cool and we kept our jackets on but the waiter spontaneously moved us closer to the terrace where there was heating, which was much better and one side of the restaurant was completely open. We ordered foie gras between us as a starter, but we should have known it wouldn’t be the façon traiteur type that we prefer. We loved the presentation though. 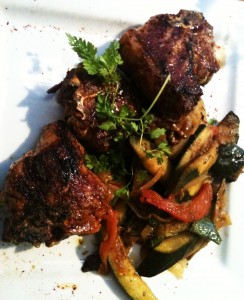 Relationnel then took the monk fish (there was still no sole) and I had rack of lamb with stir-fried vegetables. Both were very tasty even though the lamb was probably a little closer to mutton. A lot of their produce is labelled “traditional agriculture”. We chose a glass of petit chablis with our foie gras and a pays d’oc red with our main course. We didn’t have desert (we rarely do as neither of us is a natural skinny) and didn’t bother about coffee, because we prefer to make our own decaffeinated at home with déca from Verlet. The bill was a reasonable 62 euros. 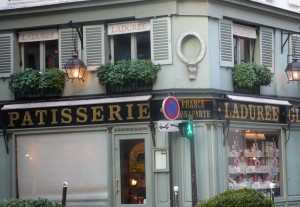 Even though Hemingway used to come here, which you’d imagine would attract the tourists, most of the patrons were French and in their late twenties, early thirties. There was no English on the menu. The service is relaxed, efficient and friendly. After we changed tables, I took a photo of an attractive-looking patisserie opposite, only to discover it was the famous Ladurée cake shop, restaurant and tearoom, founded in 1862 and known for its macaroons! I’ll have to try it out now that I know where it is.

This entry was posted in Paris, Restaurants and tagged Ladurée, Le Pré aux Clercs restaurant, lovelocks in Paris, pont des arts, where to eat in Paris. Bookmark the permalink.