Relationnel loves windmills (and wind for that matter) because he grew up in an abandoned windmill near Saumur.  Well, the house itself wasn’t abandoned but the windmill no longer had any sails and the wooden structure on top was missing. He was therefore delighted when we arrived in Bléré yesterday to see the beautifully renovated Aigremonts Windmill. Unfortunately we arrived after closing time but were able to walk right around it. 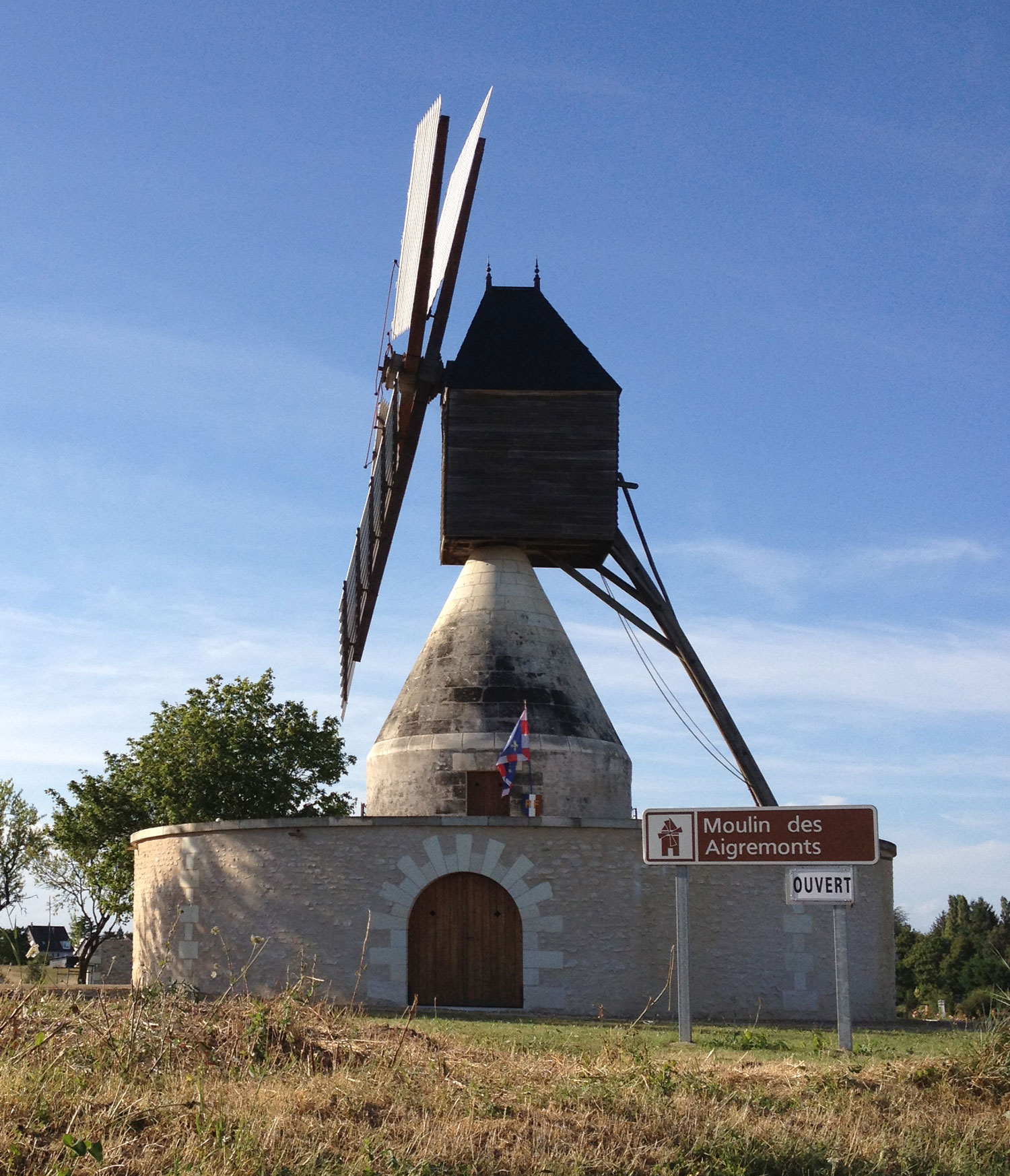 This type of windmill is called a cavier because the milling room was in the cave or cellar of the house. Aigremonts was built between 1845 and 1848 and is 18 metres high. It was renovated by the Bléré municipal council. The base, called a masse, consists of 4 vaulted cellars made of local tufa stone. The massereau or central part housing the mill rooms and milling machinery, is surmounted by a tufa stone cone, the only one to have survived the ravages of war and time. 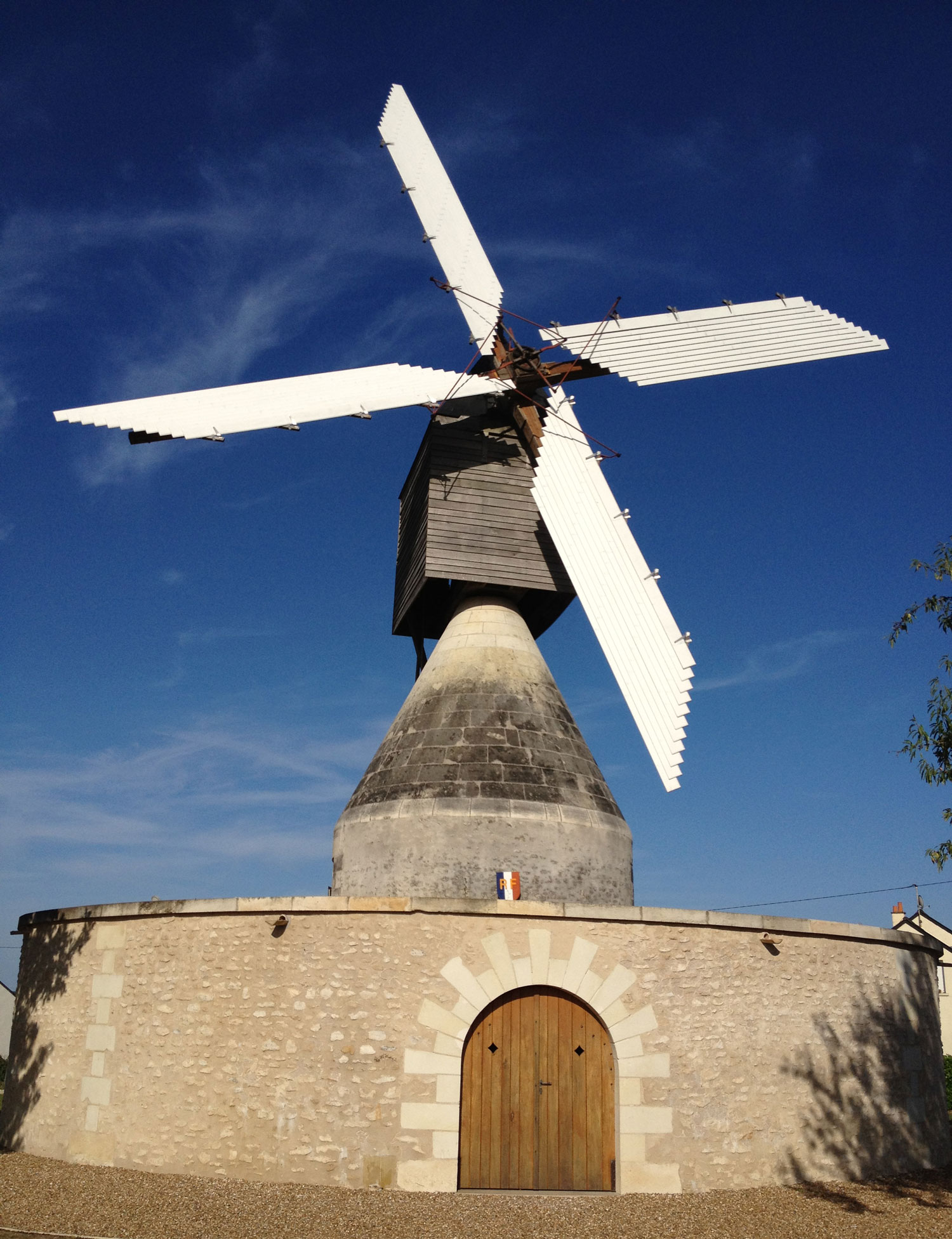 At the top, the hucherolle (which housed the drive shaft) and the sails (equipped with a Berton system) have been entirely reconstructed. 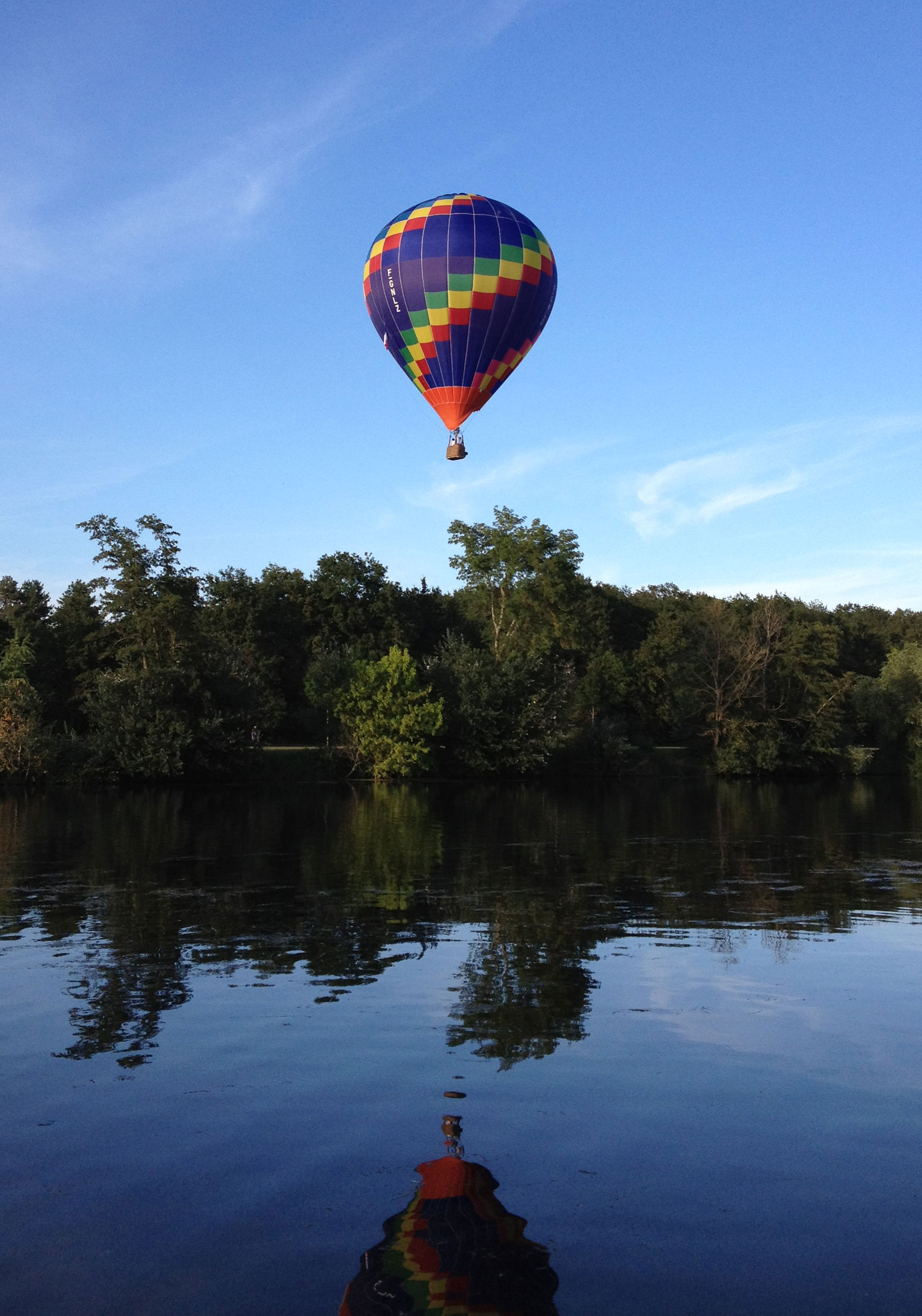 We then cycled to Chenonceau Castle, one of our favourite rides, which I’ve already described in another post. Just before we reached the château, we came across an air balloon as it was taking off on the other side of the Cher river. You could hear the sound of the fire under the basket. It’s the closest I’ve ever been to one. I really would love to find the courage to go up. It must be quite marvellous. 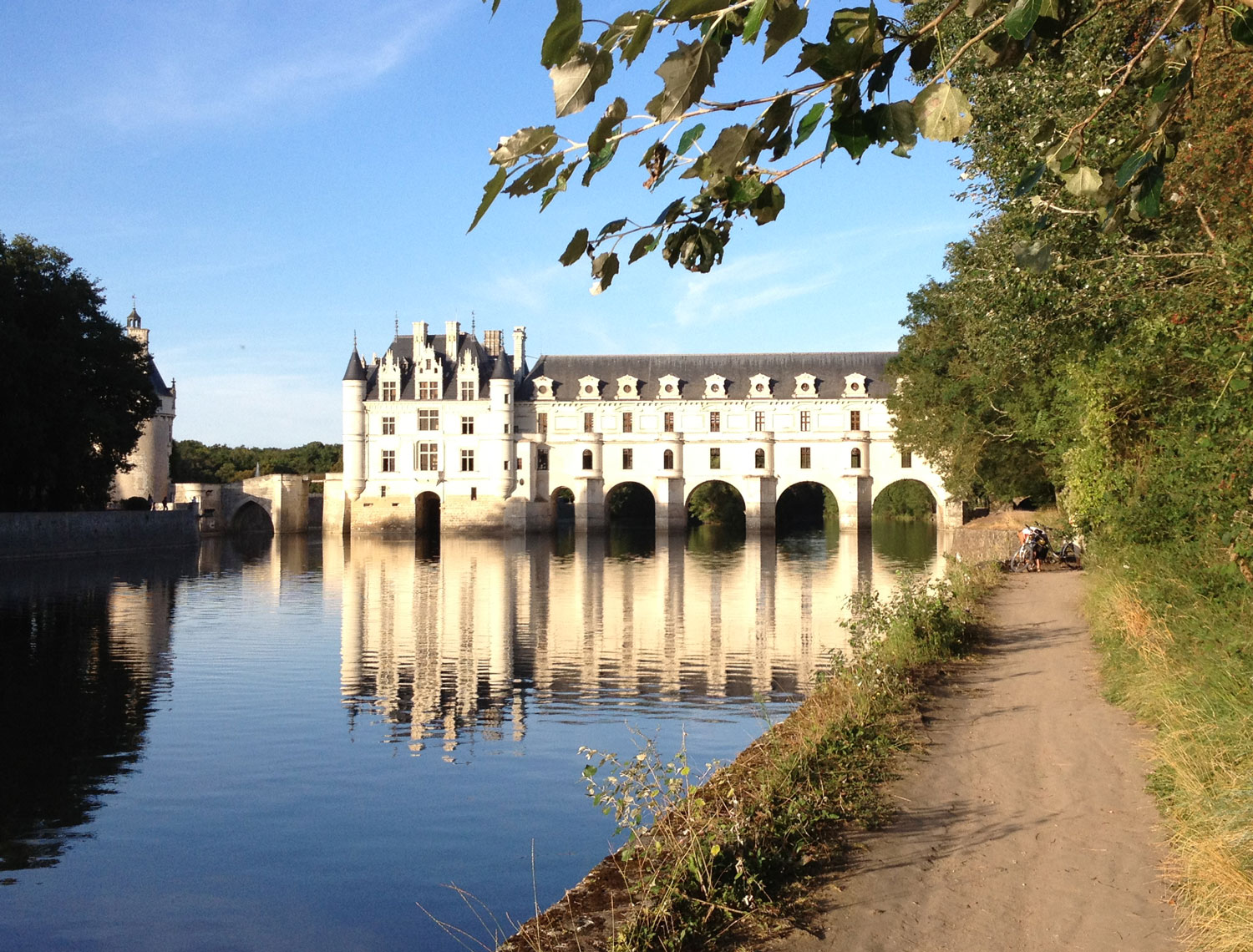 Chenonceau from the bike path along the Cher

Then we rounded the corner and Chenonceau was waiting for us, as impressive as ever. The light was just perfect – it was about 8 pm and dusk was falling. We’d never seen it at that time of the day. You could even see the water on the other side through the windows of the gallery that spans the Cher. 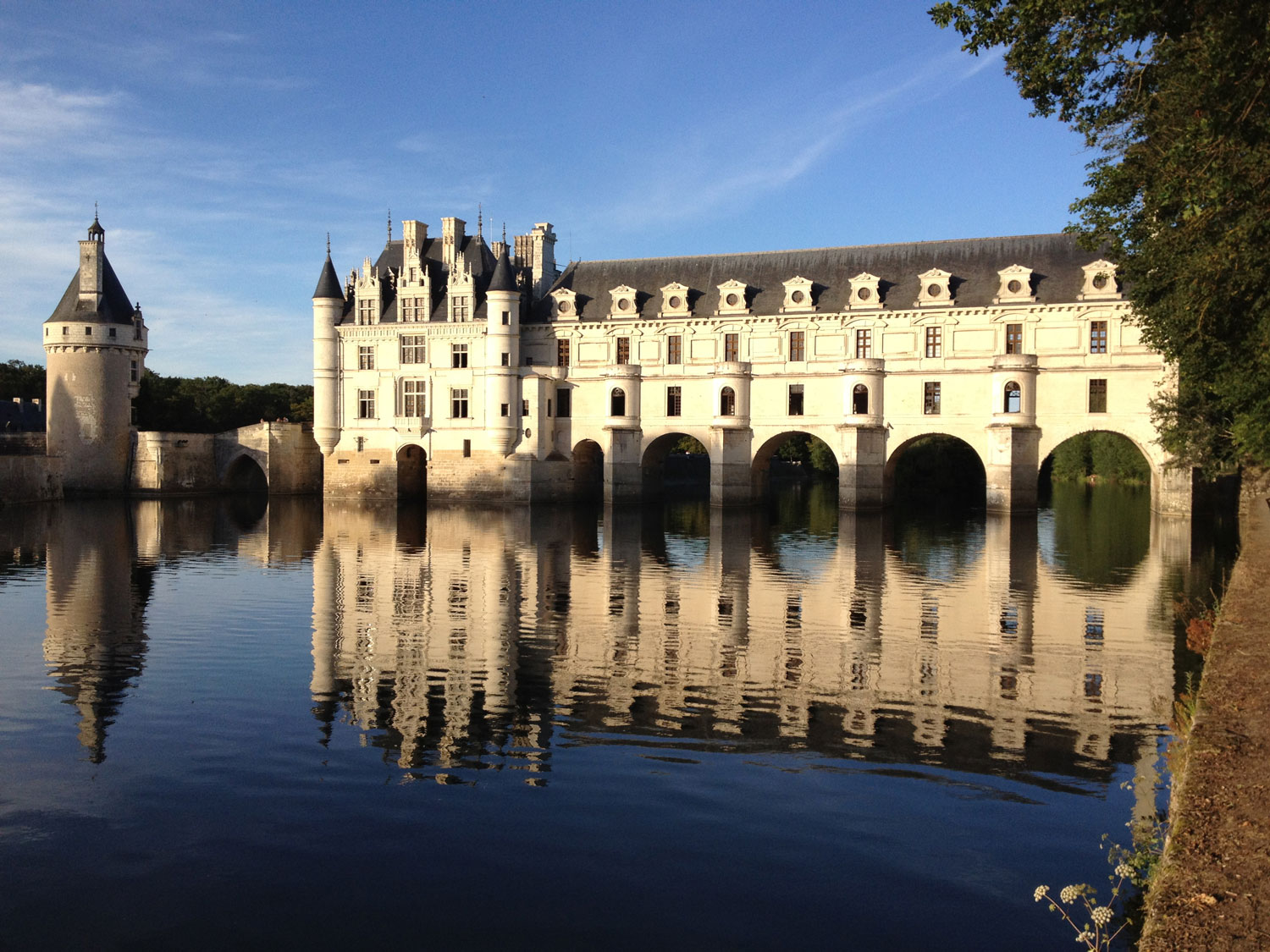 Chenonceau reflected in the Cher at dusk

We rode down as far as the bridge and back towards the château. We would have loved to watch the sunset but the bike path would have been too dark to come back and it’s a pretty bumpy ride, with lots of large tree roots and stones. I didn’t want to take the risk of falling in the river! 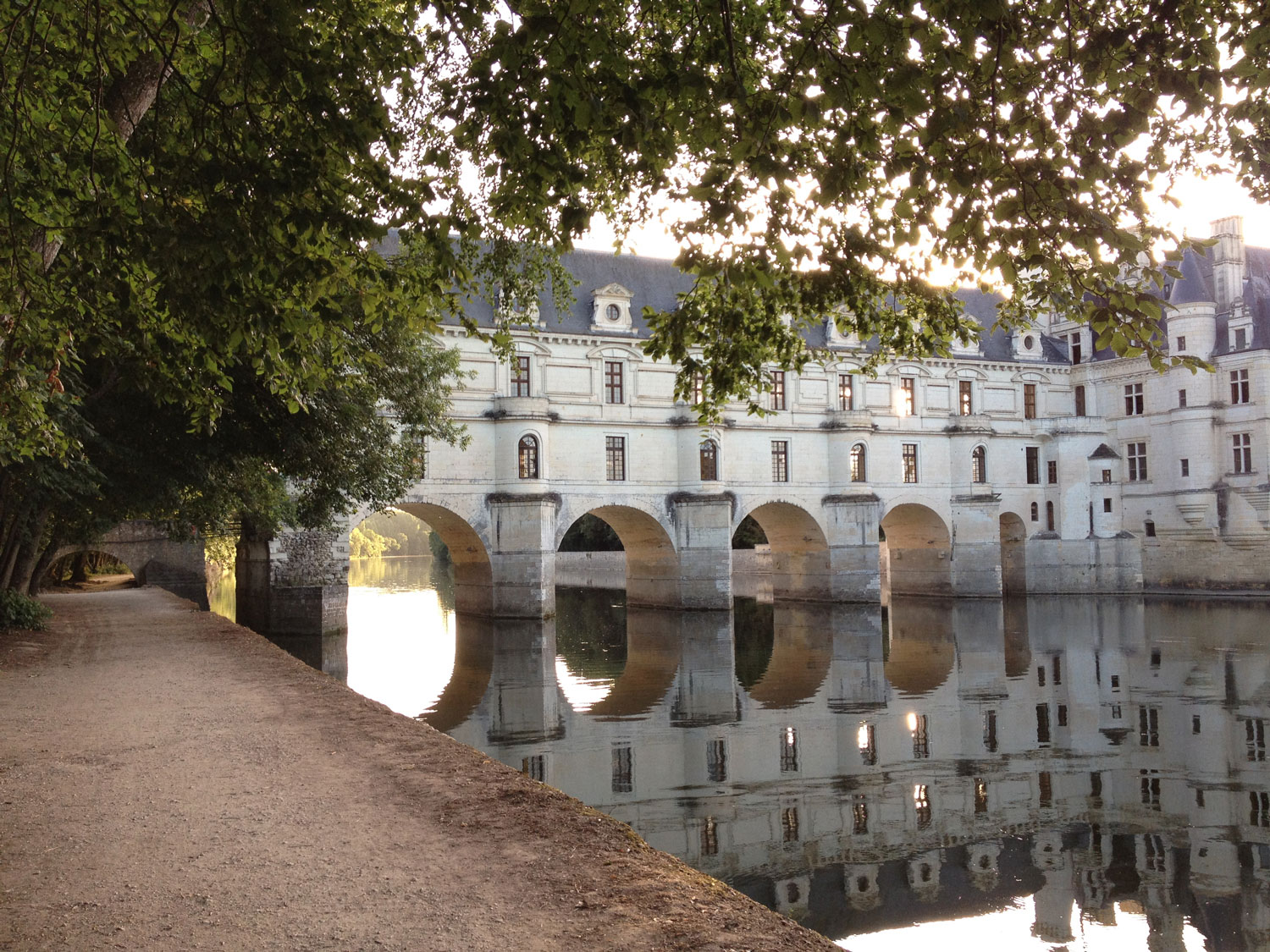 The château from the other side

So we rode back to Bléré and had dinner at a little open-air restaurant on the main square called Le Bonheur est dans le pré. We ended up chatting to our neighbours who have a property where they hunt and fish in nearby Sologne. We exchanged phone numbers so it looks like we’ll be having game for Christmas this year!