Where do you ride your bicycle? Velib in Paris and Hubway in Boston want to know! – escaping the tourist trail in Paris

In this week’s Bloggers’ Round-up, Mary Kay from Out and About in Paris compares Vélib in Paris and Hubway in Boston while Caroline Lee from Escape to Paris shares her experience of staying in an unusual and little-known place in Paris. Let’s join them!

Where do you ride your bicycle? Vélib in Paris and Hubway in Boston want to know! 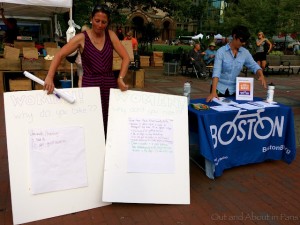 With over 20,000 bicycles, the Vélib public bike sharing system is well on its way to becoming as synonymous with Paris as the Eiffel Tower. No matter the time of year or the weather, it’s easy to spot enthusiastic cyclists crossing the Pont St. Louis or making their way precariously around the Place de la Concorde. Whenever I see an impeccably dressed woman in a skirt and high heels or a man balancing a large musical instrument on the back of his bicycle, I always want to ask where they’re headed. It seems that I’m not the only one who wants to know because the official website for the city of Paris recently posted a slide show of people who responded to the question, “Tu vas où avec ton Vélib’?” (Where do you go with your Velib?”). My favorite answer was by a couple from New York who said, “We’re wandering around without a precise destination today. Maybe we’ll go to the Luxembourg or the Tuileries, we’ll see.” Read More

escaping the tourist trail in Paris…

by Carolyne Lee, from Escape to Paris, an Australian writer, teacher, and researcher who tries to spend every spare moment in France. 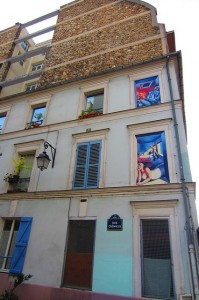 Passing through Paris not long ago, on my way to Toulouse, I needed a bed for a night, and stayed in a miniscule but lovely studio in a three-storey house in a street which my Paris friends later told me they had never heard of! It also seemed that tourists hadn’t heard of it, although as well as L’Hotel Particulier, where I stayed, I noticed another of the houses functions as a hotel, Hotel Mignon, mignon translating as ‘cute’. That certainly describes the whole street. It’s rue Cremieux, close to the Gare de Lyon, a street of former workers’ houses, now gentrified, all painted different colours–some quite startling. Some even had various quirky decorations, and the whole effect was sublime. Many of the houses are owned and lived in by families, so even though it looks a bit theme-parky, it wasn’t like that at all. Children were playing in the street, neighbours were chatting, a few people even said ‘bonjour’ to me. My pictures will tell the story much more eloquently… Read more

This entry was posted in Accommodation, Art, Cycling, France, Paris and tagged Escape to Paris, out and about in Paris blog. Bookmark the permalink.

2 Responses to Where do you ride your bicycle? Velib in Paris and Hubway in Boston want to know! – escaping the tourist trail in Paris