Posted on September 19, 2012 by Rosemary Kneipp

Here I’ve been, for the last six months, vaunting my 400-year old house in the Loire Valley and I arrive in Tasmania which has some of the oldest buildings in Australia. The trouble is, most of them look just like the buildings in the centre of Townsville where I grew up and the oldest date from the early 1800s. I must confess that it’s a bit hard to get excited about houses that are not even 200 years old. 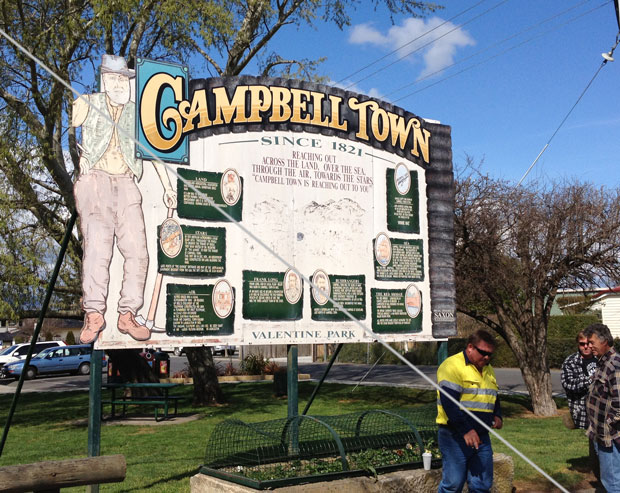 Main street of Campbell Town, in the heart of Tasmania

On our way from Launceston to Coles Bay, we stopped to get some lunch at Campbell Town, in the heart of Tasmania, established by Governor Macquarie in 1821, (population 800). We went past a place selling R.M. Williams clothing. Last time we were in Australia, Relationnel bought a shirt of that brand and we love the quality, so we went in. The young man in the shop looked about 16. He didn’t seem to have any idea where the shirts were to be found and the sizes seemed to be all mixed up. 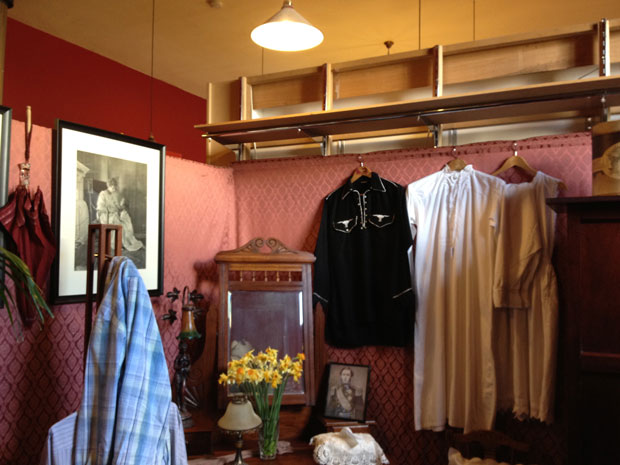 Changing room at the R.M. Williams store in Campbell Town

Most of the shirts were Stockyard, but he didn’t think to explain that it was the same brand. They were having a sale – 120 dollars for two Stockyard shirts. It took a lot of rooting around to find two Ms that we liked. What we loved was the changing room which looked like something out of a film. It seems the shop was once a grocery store.

As we left the shop we noticed a line of paving stones, with the names and details (crime, year, punishment) of the local convicts. We also passed an “Antiques and collectables” shop selling my mother’s old sewing chair for 12o dollars. I could make a fortune selling my Henri II furniture! 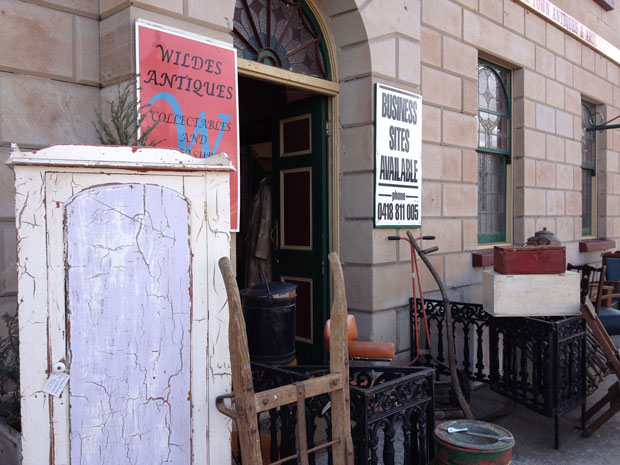 Antiques and collectables in Campbell Town

We crossed the road and I saw a church for sale. Now that’s an unusual piece of real estate! At the supermarket where we bought some coleslaw (we are pining for salad and vegetables in adequate amounts), I asked the lady at the check-out if there were any interesting villages to visit in the neighbourhood and she directed us to Ross (population 300) about 12 or 13 kilometers along the highway. 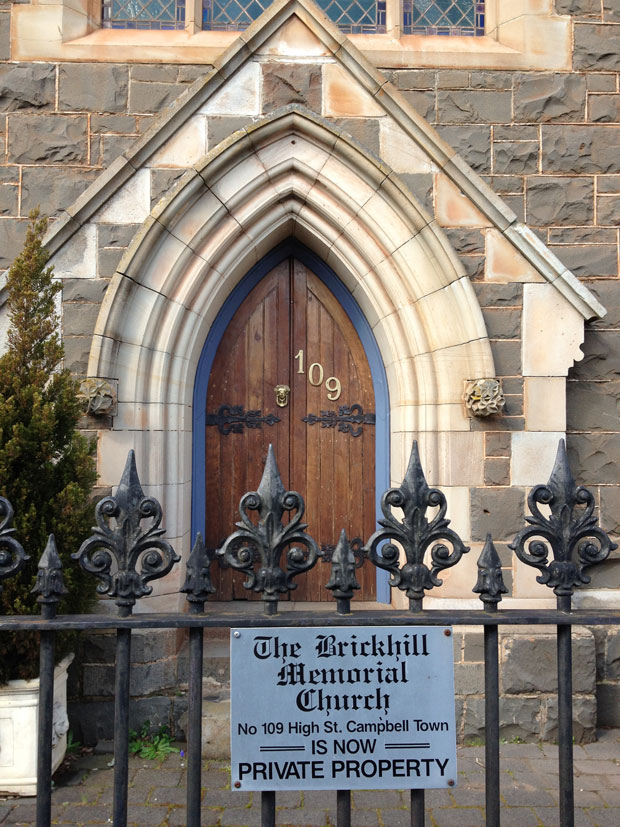 Church for sale in Campbell Town

I consulted the Lonely Planet which was rather scathing I thought : “Another tidy (nay, immaculate) Midlands town … These days Ross’ elm-lined streets are almost gagging on colonial charm and history.” Not very encouraging , I thought. I was therefore very surprised to find a sleepy little town with hardly a soul in sight. Maybe the L.P. people don’t travel in early spring. We had our lunch at a picnic table near an old school which I initially thought was a church. 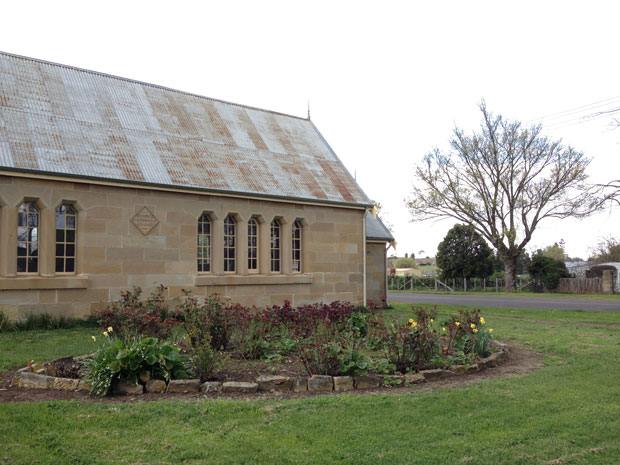 As it was starting to spit, we set off for the 3rd oldest bridge in Australia, which was a bit of a come-down (I was somehow expecting something bigger) but still very pretty with its intricate carvings sculpted by one of the two convict stone masons that built it in 1836. I was pleased to hear they were pardoned for their efforts. 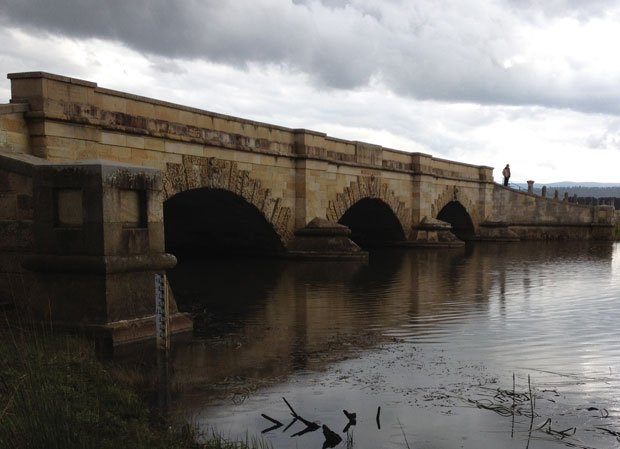 We walked up to the Uniting Church on top of Church Street hill with its panoramnic view of the surrounding countryside (that’s were we should have had lunch!), then took the Heritage Walk down past the Ross Female Factory. 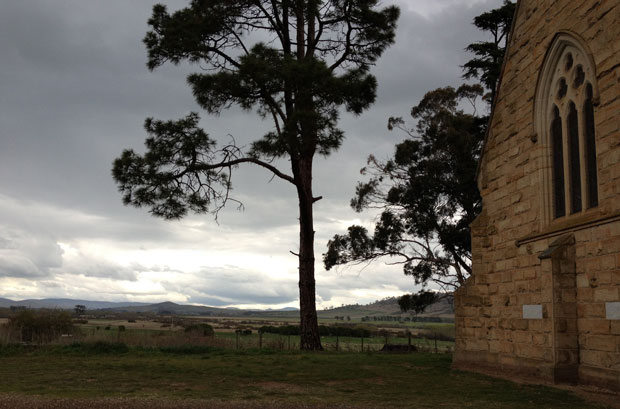 This was one of Tasmania’s two female prisons, operational between 1848 and 1854. I find it hard to imagine there were still convicts in those days. It was open for viewing so I lifted the latch and walked inside. Only two buildings remain, the assistant superintendant’s and overseer’s cottages. 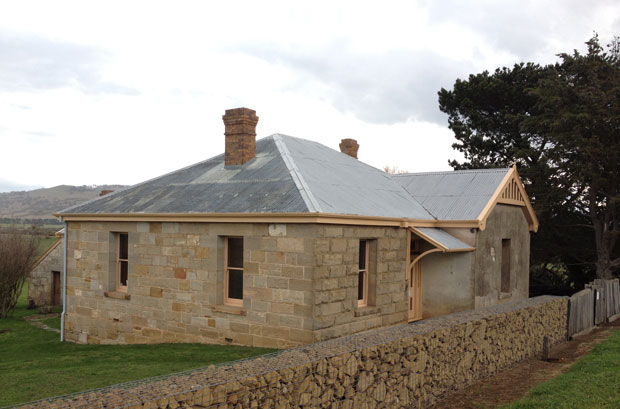 The site was both a factory and hiring depot, as well as an overnight station for convicts travelling between settlements. Because of the fresh air, it was also  a lying-in hospital and nursery. I reckon the mothers and babies must have been pretty cold. I certainly was. Posters on the wall trace the history of some of the inmates. We got back to the car just before the rain started in earnest.

This entry was posted in Australia, Sightseeing and tagged Campbell Town, Ross, Tasmania. Bookmark the permalink.

9 Responses to Old is Relative