You may remember that during our stopover in Hong Kong 5 weeks ago, I shunned shopping to follow a sign saying “To the outlying islands” and we had a most enjoyable afternoon and evening visiting Lamma Island. So on the way back, we didn’t hesitate to repeat the experience. Relationnel studied the possibilities and suggested Cheung Chau. 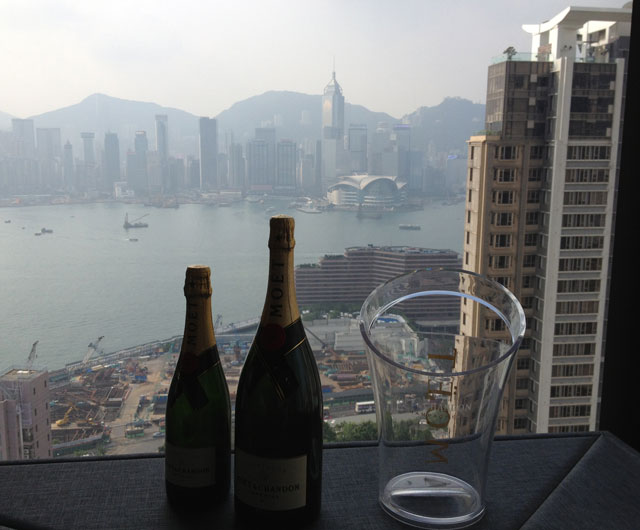 View from our hotel at breakfast

Cheung Chau which means “Long Island” is a little island about 10 K southwest of Hong Kong Island. The ferry (fast or normal) leaves every half hour from Pier 5 at Central and takes 30 to 45 minutes. As we were staying at Kowloon this time, we took the Star Ferry to Central. The payment system is easy once you get the hang of it. You need 3.40 HK dollars (34 Eurocents) in coins that you put directly into the turnstile or you get a token from the machine. At Cental, you can buy the tickets to Cheung Chau directly from the ticket window (12.50 for the normal ferry and 25 for the fast ferry). 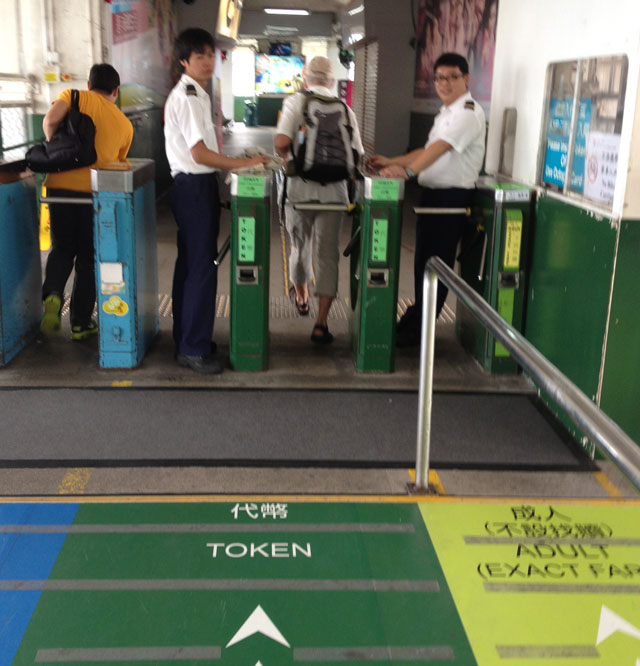 Our boat was full of teenagers all sporting the same T-shirt in various colours and obviously on some sort of excursion. There were also people dressed in white makeshift tunics. I got a bit closer to take a photo but it looked like a private affair so I exercised discretion and returned to my seat. One of the men later came up to us and explained in broken English that someone’s mother had died and they were throwing paper money into the sea to appease the ghosts. 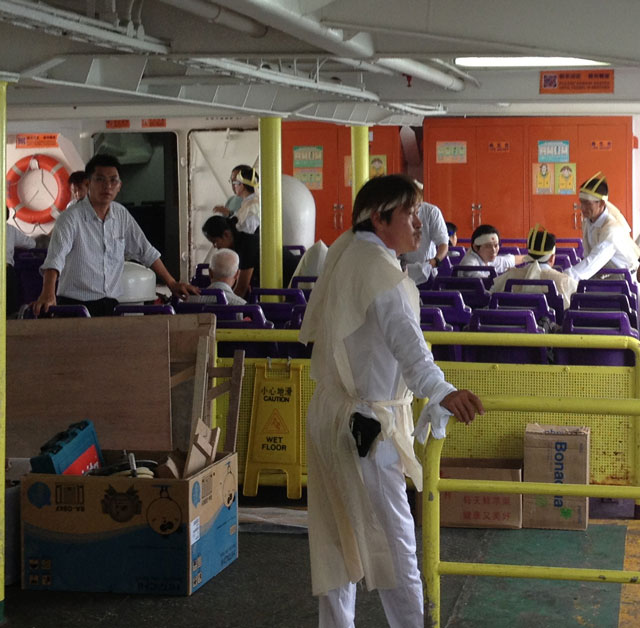 Funeral party on the boat to Cheung Chau

The approach to Cheung Cheu is very different from that of Lamma. It is more populated and there is a much bigger Chinese tourist trade. We saw very few Europeans. Like Lamma there are no cars but many bikes including the type they called Rosalie in French with a second seat behind, a bit like a rickshaw. It also has many fishing boats. 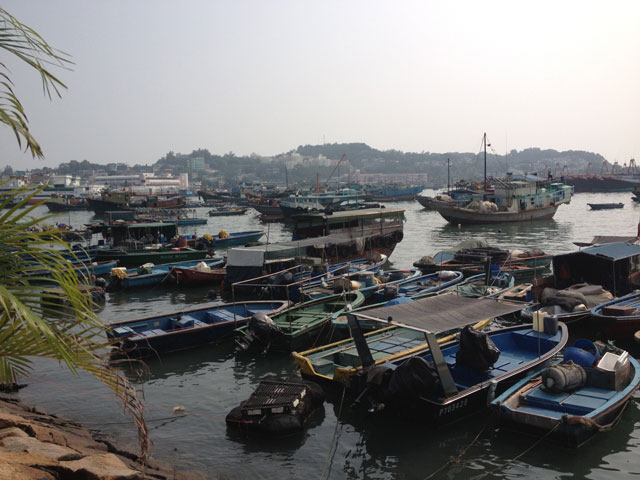 The first attraction is Seafood Street where you can eat for less than 80 HK dollars a head. There‘s always a pitcher of luke warm green tea on the table. The food was surprisingly good in the two restaurants where we ate. There seemed to be no set eating hours, athough the tables were fuller around seven. 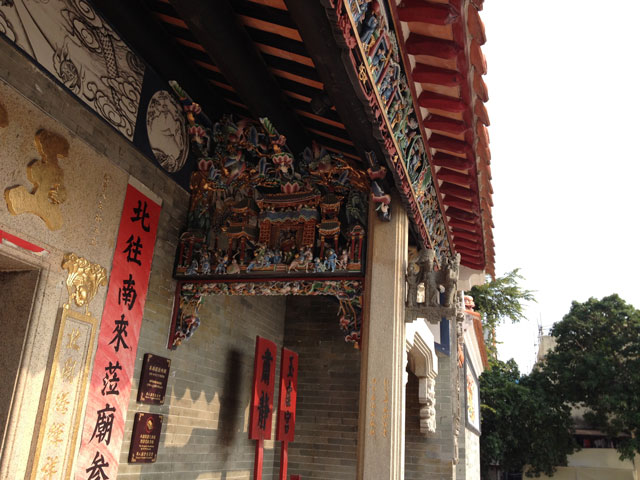 After lunch, we visited  the Pak Tai Temple, one of the oldest in Hong Kong, with its intricate porcelain figures. Our itinerary took us through quiet little back streets with little shops and eating places that reminded me of when I first went to Hong Kong more than 30 years ago. 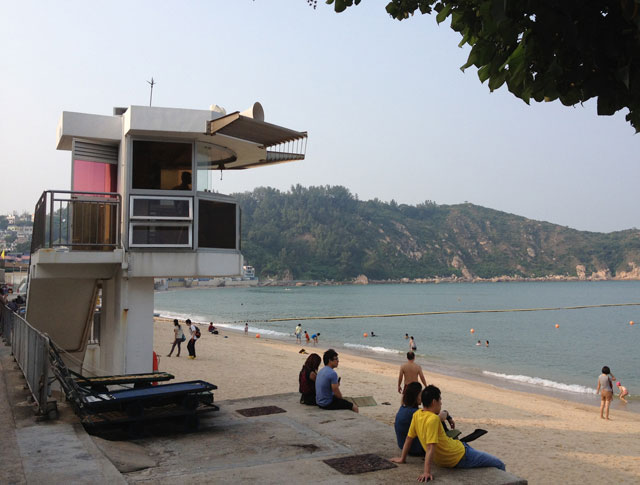 We crossed the island and suddenly come out onto a long white sandy beach. It seems that during the weekend it’s chock-a-block. There were life savers in little lookouts and changing rooms with showers, which we’d also seen on Lamma Island. As we went back towards the centre, we came across lots of street vendors selling various types of sweets on sticks. 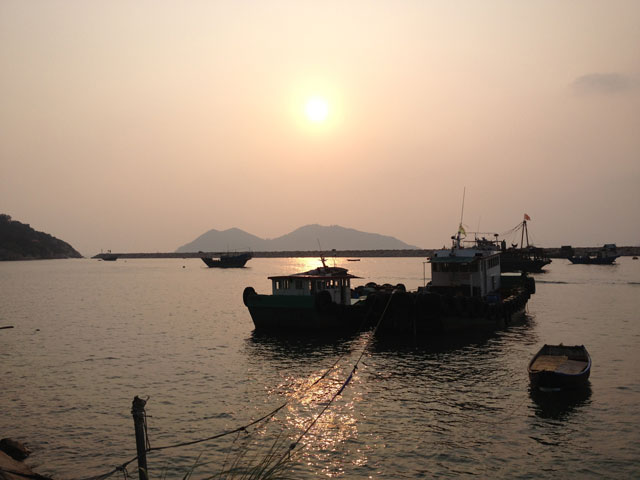 We visited a second temple, also decorated with porcelain figures, before walking in the opposite direction from the pier to a third temple. This was more like our hike in Lamma, but the distance was not so great. By then, lots of young people were out riding their bikes and quite a few older people were doing calisthenics. It was very peaceful and village-like. 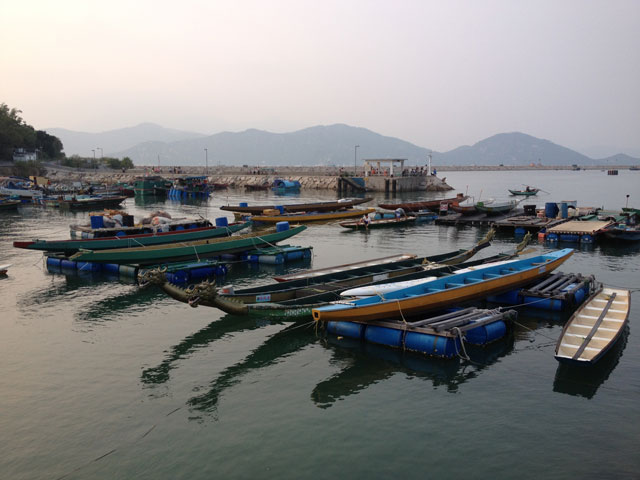 The walk to the temple as the sun was setting was most enjoyable, past fishing boats and lush vegetation. At the temple, there wasn’t a soul in site. We then went to the cave which, according to legend, was once a pirate’s hideaway. I didn’t like the look of the last part of the track so we turned back. 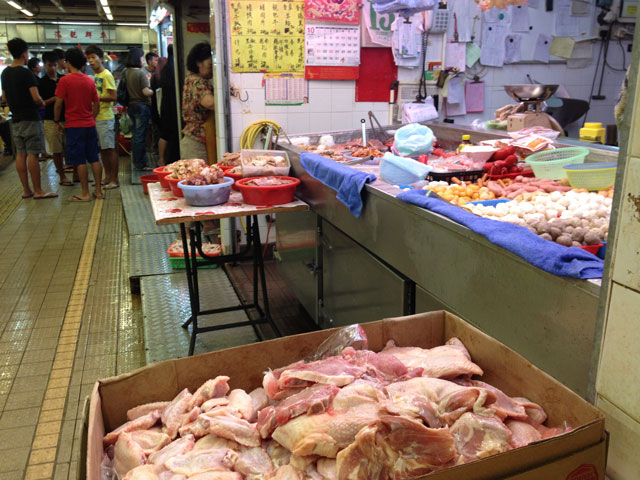 Indoor market on Cheung Chau with thawing chicken and pork

We came across a huge indoor market which was still going strong. I was a bit dubious about the cases of chicken and pork which had obviously been left to thaw. No sign of ice or refrigeration of any kind. We chose fresh seafood for dinner – it seemed a bit safer! 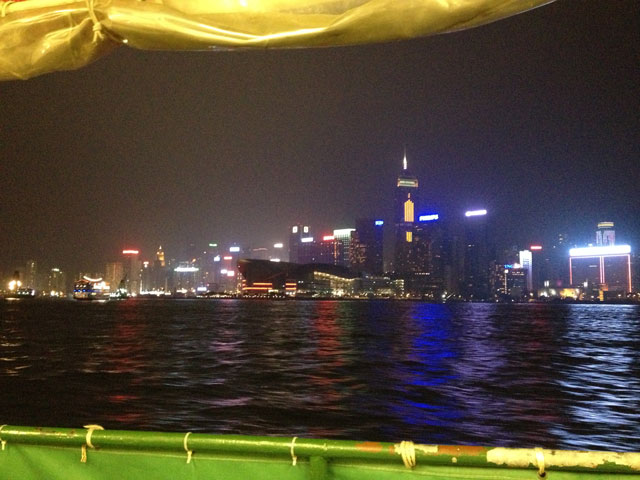 Hong Kong at night from the ferry

We took the fast ferry back and once again, were enchanted by the lights on Hong Kong’s skyscrapers.  I think that we’re probably seen all Hong Kong has to offer a non-shopper so will try a different route to Australia next time – maybe via Korea!

3 Responses to Cheung Chau – another outlying island in Hong Kong