As I mentioned in a previous post, I have been nominated for the 2012 Expat Blog Award (you still have time to write a review if you haven’t already done so 🙂 – just click on the logo on the right and scroll down to Aussie in France). Expats Blog currently unites 942 expat blogs in 93 countries with their latest blog posts, blog reviews, expat interviews & contests. Their news team bring daily topical news items from around the globe.

The team also asked if they could interview me for their website www.expatsblog.com and I was happy to comply. Here’s the beginning of the interview. I’d just like to mention that the photo was taken when I was talking to my son Leonardo when we were holidays recently in Australia. 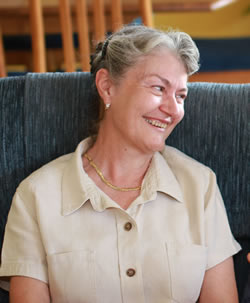 Rosemary Kneipp knew from a very early age that she wanted to live in Europe. She learnt French at school and her university studies were aimed at achieving fluency in the language and getting a job in France. She has never regretted her choice and although she enjoys visiting Australia, France corresponds to her mindset in every way. Both her children were born and grew up in France and her husband is French. She doesn’t ever feel like a foreigner. In fact, when she goes to Australia, she feels as though she doesn’t belong there any more. Although she never thought she would want to leave Paris, she is looking forward to her new life in the Loire Valley in two years’ time and is spending lots of short holidays there in the meantime. Rosemary blogs at her site called Aussie in France. Read more

This entry was posted in Lifestyle and tagged Expats Blog Award 2012. Bookmark the permalink.

7 Responses to Australia to France – Expat Interview With Rosemary