Banking in Australia When You Live Overseas

We don’t go to Australia all that often – only once every three years – but with the development of Internet banking, I thought it might be useful to have an account in Australia to avoid the hassle of international money transfers through my French bank and the cost of using a Visa card on holidays. 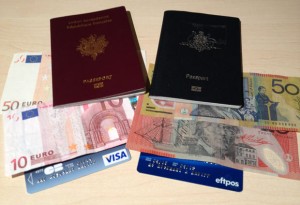 So I found a phone number for a well-known Australian bank and rang them. Within ten minutes, I had opened two linked accounts, one of which had an astonishing 6% interest rate. Certainly far above the 2.25% maximum I can get on my savings accounts in France. It seemed too good to be true.

I had some money transferred into one of the accounts from time to time for various reasons (if Leonardo had a bill to pay in France in euros, for example, I would pay it and he’d put the equivalent amount of dollars in my account), thus saving him an international transfer and giving me some savings for my next holiday in Australia. One day, I wanted to see how much was in the account. And that is when the problems started.

Until I went to the branch I had nominated in Parramatta and showed my ID, I could not obtain the Internet codes. I spoke to various people on the phone and was finally told that I could have my passport and signature verified by the Australian embassy and fax them through. Which I did, at great expense. However, I could still not obtain my codes and any further inquiries were ignored.

In the end, I decided to wait until I got to Australia in September, hoping that I wouldn’t die in the meantime and have my money go to the State! I waltzed into the bank thinking it would only take a few minutes. That was a misconception. I was asked for TWO Australian identity papers. Which I don’t have. I only have my passport. I have plenty of French ID – passport, ID card, driver’s licence, medical card, voting card – but not having lived in Australia for 37 years, I have no other Australian ID.

Nearly an hour and several phone calls later, at my insistence, my French passport was accepted as a second ID. To take money out, I needed a plastic card, but I couldn’t guarantee a postal address where I would be certain to receive the card while I was still in Australia. Tricky. However, I could take money out at the counter, with my Australian passport, at any branch in the country – for €2.50 a time. So much for saving money.

I then said casually, “I suppose this account really is getting 6% interest”. “Oh, no, that depends. Since you haven’t filed a tax number, there’s withholding tax. And you have to put 10 dollars in each month to get interest.” I was flabbergasted.   I asked if I could have a 12-month statement. No, I could only have the last 3 months. Now why hadn’t I been told all this when I opened the account?

I took out a large amount of money (no charge the first time!) and left the bank, angry and discouraged. Relationnel and I divided up the money between us and hoped we wouldn’t get mugged along the way. We were in Parramatta, after all.

Towards the end of our holiday, I went to see another branch on the Gold Coast, prepared to close the account and change banks. This time, the young man was much more cooperative. I was told that I could transfer money into the linked account then set up a monthly transfer of ten dollars so that the first account would be interest-bearing. With my plastic card, I would only pay 50 cents a time to take out money from the ATM. After several emails back and forth, I finally received a 12-month statement.

I can now consult my bank statement on-line, make transfers to other accounts, including international transfers, and receive interest!

But my advice, after all this, is to choose an international on-line bank that is especially geared towards expats and check all the ins and outs. You’ll avoid a lot of hassle. Banking rules are far too complicated for us lesser mortals!

6 Responses to Banking in Australia When You Live Overseas