The Fireplace is Finished – well, almost

Posted on January 9, 2013 by Rosemary Kneipp

We are on our way back to Paris. It’s 10.30 pm and by one o’clock, we should be in bed. Not like last night when Relationnel hit the sack at 4.30 by which time I was asleep, woken from time to time with hammer blows. But today was our last today and it seem inconceivable to leave Closerie Falaiseau without finishing the fireplace. 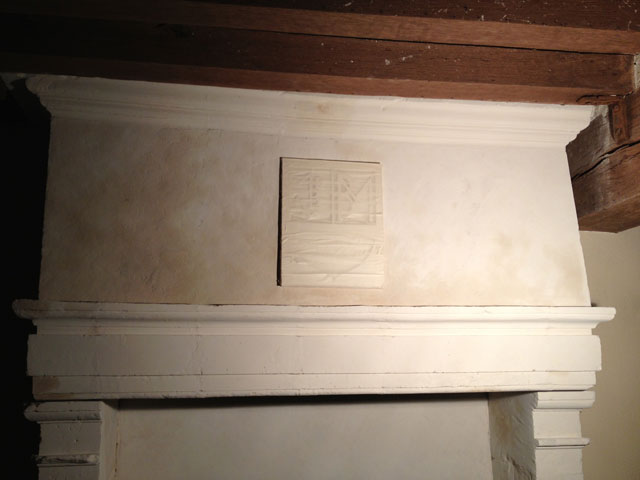 After the third coat of limewash

In yesterday’s post, I was up to the first coat of limewash. When we got up next morning, we were surprised to discover that the pale ochre colour in the bucket had turned almost white on the fireplace. I applied a second coat and a certain amount of homogeneity appeared. It was quite amazing. 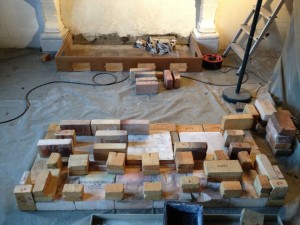 In the meantime, Relationnel  began work on the hearth which – obviously – turned out to be much longer than expected. First, we were using refractory bricks of various shapes and sizes which Mr Previous Owner had recuperated from somewhere or other, thus saving us quite a bit of money. Second, there have to be little air tunnels in the hearth under the top layer of bricks. By the time he had laid it all out (upside down), it looked like miniature Roman bath ruins. 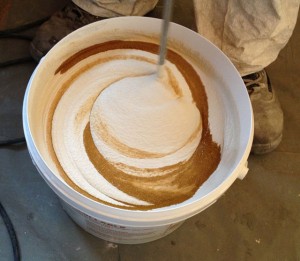 Mixing the colour into the rendering

So while that was going on, I started the rendering on the walls. I must say I had been somewhat apprehensive. I’d looked for a video on You Tube on applying “removable” rendering with a roller and there weren’t any. I did watch one on applying ordinary paint with a roller and got a few tips though. First, we mixed in the colour (well, Relationnel did with his neat machine) hoping we wouldn’t need a second batch halfway though because it didn’t look very repeatable. Relationnel then demonstrated how to apply it and it didn’t look easy at all. The paint seemed to fall off the roller before it even got to the wall. 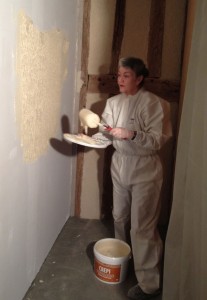 Now, how to get it onto the wall without it falling off first

He told me to begin in the middle of the right wall (which will be hidden behind a large bookcase) until I got the hang of it. One of the things I saw on the video was that you should do the edges with a paint brush first (after putting adhesive tape on the adjacent wall for protection).  My efforts didn’t look too bad and the paint got better at staying on the roller once it was totally impregnated. 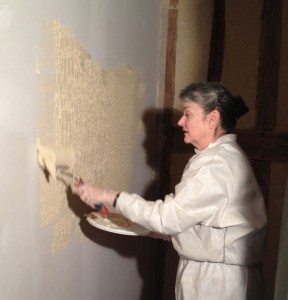 Fraussie learning the techniques of rendering

That bit was done standing up. Then I had to climb a ladder to do the top bit. I’m not that keen on being that high up and by then the paint-soaked roller was really heavy. Also, since my technique was better, the paint wasn’t as thick, making the join a little obvious. There was also the hard-to-get-at bit between the mantle and the oak beam that you more or less have to do blind. 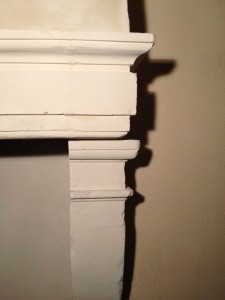 The wall on the right of the fireplace after rendering

After the middle and top sections came the bottom bit which is hell on your back.  While I was doing it, Relationnel appeared. “That’s dangerous, you know”. “Oh là là”,  I thought, “What have I done now?” “Oh, why?”, I asked, hiding my apprehension. “Because now I’ll want you to help me all the time.” “Ha ha!” The whole wall only took a couple of hours and I was rather pleased with the result though a little uneven. I attacked the second wall with much greater aplomb and it looks most professional. 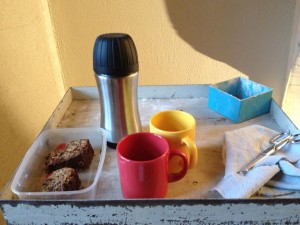 Tea and Christmas cake on the worksite

Meanwhile, Relationnel was still messing around with his bricks and finally came to the conclusion that some of them would need to be cut. Eventually, everything was ready and he started cementing them into the frame. After tea and Christmas cake on the worksite, I added another coat of limewash. The result was getting better all the time. 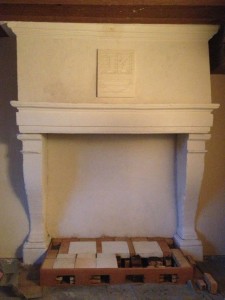 But the bricks were very tricky and when Relationnel went to bed at 4.30 am, he hadn’t finished. This morning, he finished them off while I put on another coat of limewash. After lunch, it was my turn to help again and I learnt yet another skill – putting refractory mortar (my old friend) between the joints. We finished off the job together and at 7 pm, the only thing left to be done was to add the ventilation grills but two of them require a special metal bracket but that will only need another hour or so next time to we go to Blois. 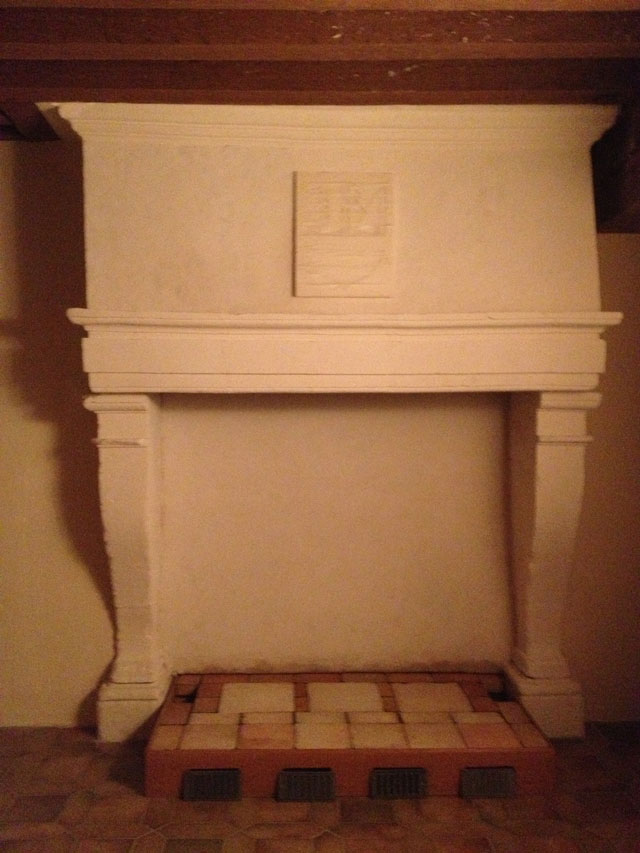 We’re not satisfied with the mantel which needs another coat of fine-sand rendering to get rid of all the bumps but we can live with it for the next two years. The next time we go to Closerie Falaiseau, we’ll go hunting for a sofa at the dépôt-vente, buy some firewood, find a way to get our 150 kilo fireback upstairs, lit the fire then crack open the champagne !

This entry was posted in Architecture, Loire Valley, Renovation. Bookmark the permalink.

11 Responses to The Fireplace is Finished – well, almost