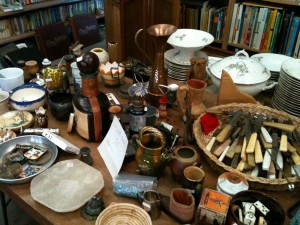 There’s actually a verb in French – chiner – for poking around in junk and antique shops looking for treasures! Now that we have a house in view, we’ve started doing the rounds of “brocantes”, “dépôts ventes” and “antiquaires” though I think we might have to give the last one a miss because of the high prices. A “brocante”, Relationnel tells me, is always out of town and everything is just piled higgledy-piggedly and you have to really root around. The “dépôt vente” is a place to which you take something you want to sell i.e. you “deposit” it, and the seller takes a commission. The prices are usually very reasonable, particularly for large items of furniture that are too big for most apartments and houses. We went to one in Nogent sur Marne last weekend and saw lots of things that would be great for the new house, once they’ve been spruced up a little, but we don’t have anywhere to store them. Antique shops, on the other hand, particularly in Normandy where we’re staying until Christmas, are more upmarket. 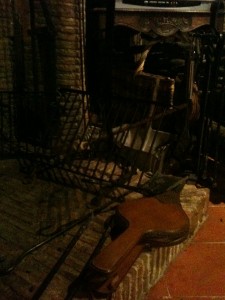 At the moment, we’re looking for plaques de cheminée (firebacks), chenêts (fire dogs, isn’t that a neat name?) and other sundry utensils for the four fireplaces in our new house in Blois, only three of which we’ll be using. The other’s in the bedroom, which would be a bit messy because of the carpet. We all ready have one set of utensils that we have bought over the years to take with us in winter when we rent houses with fireplaces because they aren’t usually properly equipped. It seems that people get off with the pokers and tongs and break the belows. So we have our own pair of bellows, a shovel, brush, poker, large rake affair and a meat grill. We also have a chestnut pan (with holes in the bottom).

The only problem with this type of activity in winter is that the places are never heated. I was positively frozen through after the third one. So we’ve decided to change tactics. There is a website called “Le Bon Coin” (The Right Corner) that Relationnel has been checking out. It even has an iPhone app! So we looked up plaque de cheminée and came up with a long list. We ruled out the ones that said “à débattre” which I always thought meant the seller was ready to knock the price down but it seems that it actually means they sell to the highest taker. We finally narrowed our choice down to three. The first was already sold, the second wasn’t answering so we left a message and the third said someone else had already contacted him and it would be “first in first served”. He was 50 minutes away, on the other side of Rouen. 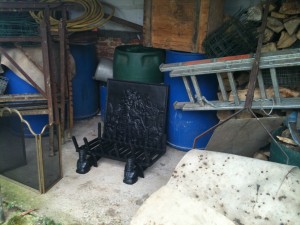 We put the firescreen in front of the fire, put our shoes and coats on and arrived on his doorstep 50 minutes later. The other buyer didn’t have a chance. Relationnel told me he had spoken to a “couple in their thirties”, but the man who opened the door was a spry 70! He took us down to a lean-to at the bottom of the garden and there was the fireback, a pair of firedogs, a log-holder (no doubt there’s a real name in English) and a firescreen. It seems they used to have a fireplace but something happened to it and they got a wood stove instead. He bought the fireback in 1976 from a foundry in Cousances that dates back to 1553 and uses traditional designs. We actually have a “certificate of authenticity” and our fireback is numbered!