Some more Australian connections for this Wednesday’s Bloggers’ Round-up, starting with Phoebe from Lou Messugo, who takes us on a visit to Châteauneuf in the south of France; Susan from Days on the Claise who describes her local charcuterie in Touraine and Carolyn from My Sydney Paris Life who gives us a very moving description of the beautiful Nissim de Camondo museum in Paris. Enjoy!

The Alpes-Maritimes is bursting with a multitude of pretty hill villages, called “villages perchés” in French, built during the middle ages in strategic spots on mountain tops and hill sides. There are at least 15 within half an hour’s drive of Lou Messugo, all with their own charm and more or less renovated/developed for tourists or left in an authentic untouched state. But there is one so close and yet so hidden that many people visiting the area wouldn’t even realise it exists. (I’d be prepared to bet a significant amount of local residents don’t realise there’s a medieval “perched” bit either). I’m talking about the village of Châteauneuf de Grasse on the outskirts of its famous neighbour, Grasse. Read more

by Susan from Days on the Claise, an Australian living in the south of the Loire Valley, writing about restoring an old house and the area and its history, and running Loire Valley Time Travel. 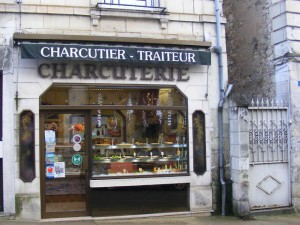 The charcuterie in Preuilly is well patronised and they have a good range of products. Most are made in house, some brought in. French charcuteries focus mainly on value added pork products — often cured, but sometimes simply cooked and ready to eat. They also do salads and prepared dishes. This is because many of them, like the one in Preuilly, are also traiteurs (caterers). Read more

by Carolyn Barnabo from My Sydney Paris Life, writing about global families and change and life in special geographic places that have captured her heart 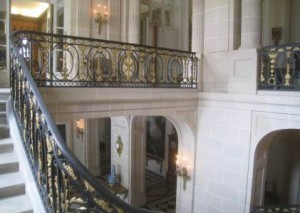 Earlier this week, Clive and I visited Paris’s Musée Nissim de Camondo. In the days since then, we’ve often found ourselves returning to the story of the family whose sad, horrific history shaped our experience of spending time in what was once their home.

The first time I read about Musée Nissim de Camondo was in Edmund White’s ‘The Flâneur’ (2001). I know little about ‘decorative arts’ and tire quickly of stately homes brimming with historic furniture and all manner of objects — I’d rather explore the gardens and grounds outside. But White’s recounting of the de Camondos’ personal story grabbed me and I’ve had this museum on my Paris to-do list ever since. Read more