A post by Susan from Days on the Claise in which she described the fare offered at her local charcuterie set me thinking about the word “persillé” which literally means “parsleyed”, used to describe pâté or brawn with parsley through it.

However, when applied to an entrecôté or côte de boeuf, it also means “marbled”, that is, with streaks of fat through it. I couldn’t quite understand how, etymologically, you could get from parsley in a pâté to streaks of fat in meat. 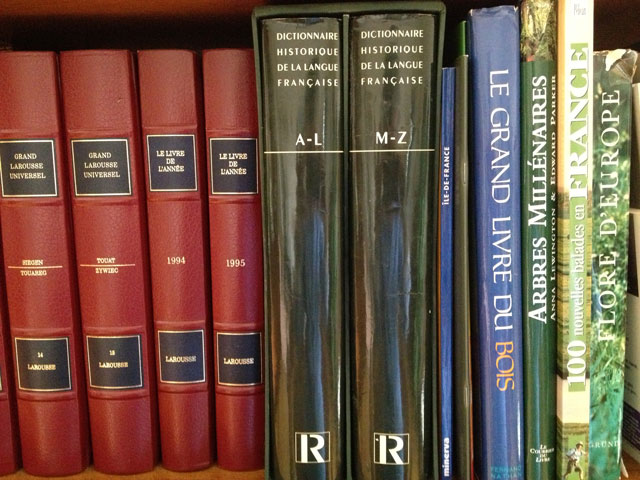 So I checked out my very favourite dictionary, the “Dictionnaire Historique de la Langue Française”, a beautiful two-volume affair that has that lovely thin bible paper. I happened upon it once at the Maison du Dictionnaire in Paris when I was looking for some technical dictionaries and, despite its exorbitant price, couldn’t resist buying it. But I’ve never regretted it.

“Persillé” was first recorded in 1694 with its original meaning of blue or rather green-veined cheese, “not to be confused with persillé meaning a preparation with parsley as a condiment”, a rather strange thing to say as you would imagine that the resemblance to parsley would have come first.

By analogy with the green-veined cheese, it means anything “with green stains” (1864). There’s a cheese called “persillé de Savoie“. But it has another unexpected meaning. In Provençal, “persil” (parsley) is slang for “money”, along with “oseille” (sorrel) and “épinards” (spinach), and, by analogy (once again), for prostitution (1840). As a result, “persiller” also means “to sollicit clients” no less.

So now you can go off to the butcher’s and ask for an “entrecôte bien persillée” (unfortunately the way I prefer it) and to the cheesemongers and surprise them by ordering “fromage persillé“.