A Just Reward – The Macchiaioli

Saturday was set aside to do my professional tax declaration, never something I enjoy and I expected it to take all day as there is inevitably something that I haven’t done according to the book despite the fact that I use accounting software and do my VAT (GST) declaration once a month.  As it turned out, it didn’t take as long as we expected and by 4 o’clock we were ready to do something more interesting. 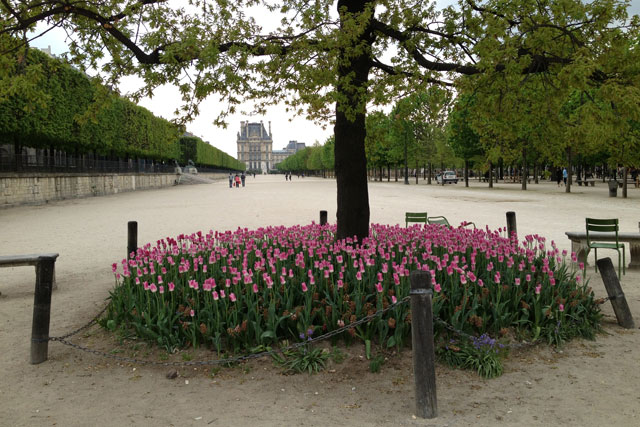 Tulips in the Tuileries with the Louvre in the background

My first idea was to go and see the cherry blossoms in Parc de Sceaux, but it was cold and overcast which made the venture a little risky. I suggested instead that we walk down to the Orangerie Museum near Concorde and if there was no queue, we could visit the permanent exhibition. The museum was completely remodelled a couple of years ago and we hadn’t been there since. 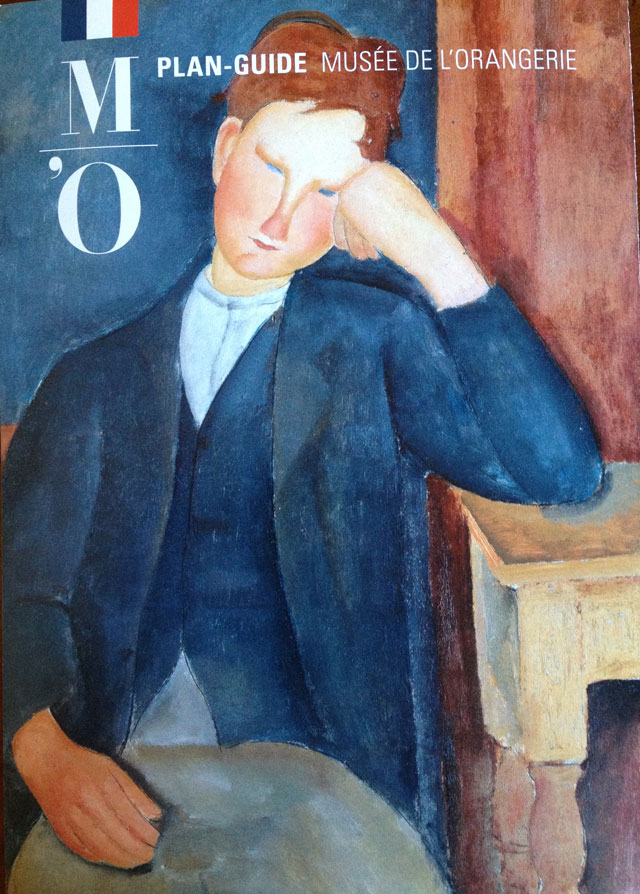 Probably because it was about 4.30 pm by the time we got there and the museum closes at 6 pm, the queue was very short. L’Orangerie used to be one of my favourite museum, particularly the two oval rooms with Monet’s nympheas, but it also has large collections of paintings by Renoir, Matisse and Derain, with smaller collections of Cézanne, Rousseau, Modigliani, Laurencin, Picasso, Utrillo and Soutine. 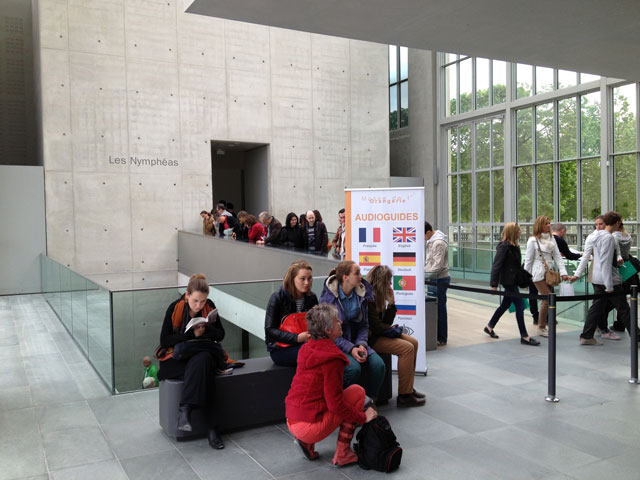 I was somewhat disappointed with the renovations, very stark, with lots of steel and concrete, which I found unappealing when compared with the beautiful 19th century rooms that used to contain most of the paintings. However, there is more space now and the Picasso, Utrillo and Derain collections, in particular, are much bigger. Also, perhaps because I have seen them so often over the years, the oval rooms didn’t have their usual effect on me. I remember the first time I saw them nearly 40 years ago, I wanted to lie down on the floor and go to sleep! 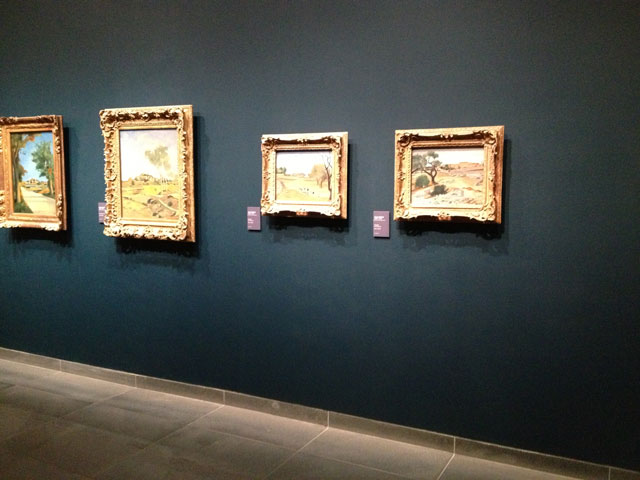 Paintings from the permanent collection on the wall inside the museum

However, I did learn the story behind the collections in the Orangerie this time. Paul Guillaume started his working life in a garage and eventually became a wealthy art dealer and collector, quickly becoming a respected figure in artistic and literary circles in the 1920s. He died in 1934 while still in his forties. His wife completed and modified the collection which was donated to the Louvre in 1959. 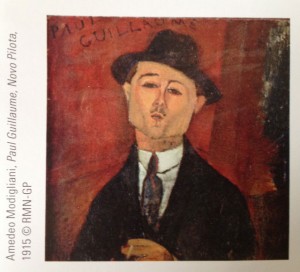 As we were leaving, we noticed a temporary exhibition called Les Macchiaioli. As soon as I walked in, I fell in love with everything I saw. I loved the extraordinary light that emanated from all of the paintings, the precision of the lines, the subjects, the colours, the detail. 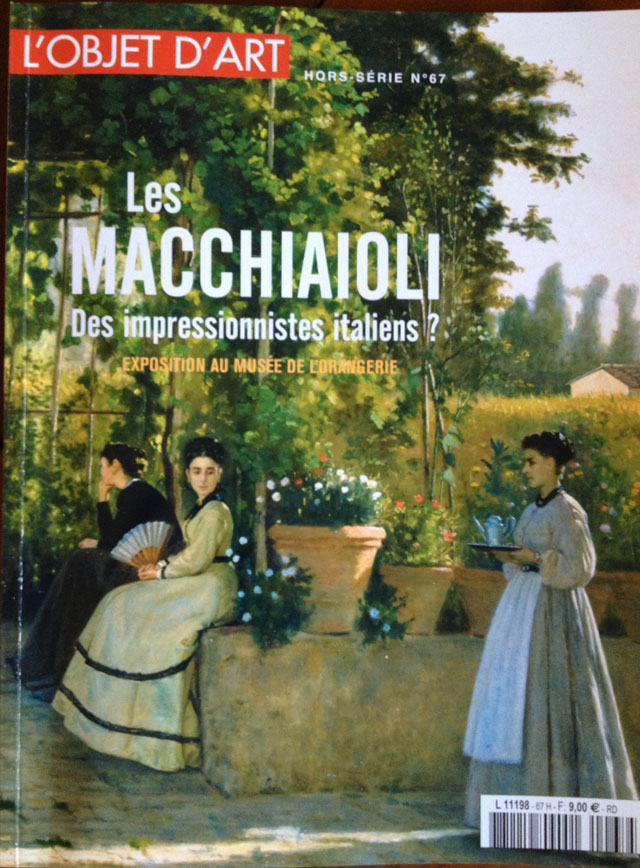 The Macchiaioli date from 1850 to 1874 and are sometimes referred to as the Italian impressionists.  They were a small group of artists from Tuscany, many of them revolutionaries, who used to meet in a café called Michelangiolo. They were the first painters in Italy to break with the traditional academic style of painting.

Much of their work was done outdoors to capture natural light, shade and colour. The most prominent artists, represented in the exhibition, are Odoardo Borrani, Guiseppe Abbati, Giovanni Boldini, Odoardo Borrani, Vincenzo Cabianca, Giovanni Fattori, Silvestro Lega and Telemaco Signorini.

Macchiaioli was originally a derogatory term invented by a art critic in 1862. Macchia not only means patch or spot but also sketch or sketchy. Macchia denotes a forest as well,  in reference to the fact that the artists painted outdoors. In any case, the idea of patches or spots, denoting areas of light and shadow, corresponds well to what they believed was the essential component of a work of art. 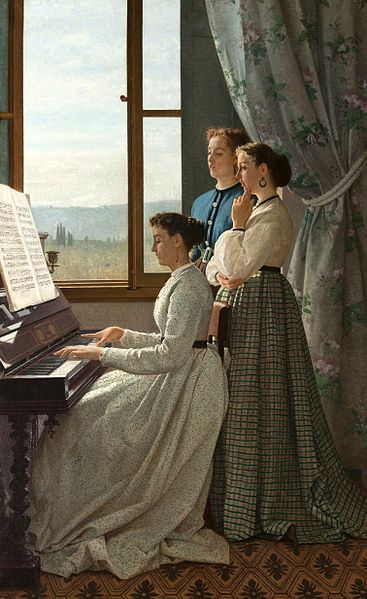 Jean Michel noticed that in two of the portraits the eyes followed you, no matter where you stood: Antonio Puccinelli’s Portrait of Nerina Badioli and Odorardo Borrani’s Portrait of a Young Man. We were both particularly taken with a large light-filled portrait of three women: Silvestro Lega’s Il canto di uno stornello.

It’s definitely one of the best exhibitions I’ve seen in many years. It has just started and will be on until 22nd July 2013 in Paris, then in Madrid at the Mapfre Foundation from 20th September 2013 to 5th January 2014. I hope you enjoy it as much as I did. I know I’ll be going back to see it again.

9 Responses to A Just Reward – The Macchiaioli